Do you remember when ground beef was under a dollar a pound? I do. These days I feel lucky to find it under five dollars a pound. Which explains, in part, how I came to make bison meatloaf.

I always had the vague idea that bison* are an undomesticated cousin of the herding animal that accounts for the beef we generally find in stores. Yes, my son, said the domesticated steer to the curious calf, In the grand history of the Bovidae family, we have some… let’s call them… “wilder” relatives. Never listen to Aunt Bessie on this point, son – she calls them renegades and I think that’s rather intolerant of the slight differences between us, and I cannot abide intolerance! …sigh… Back in the Pliocene when our family history began and the forests and mountain areas of Eurasia were our home, all of us had horns that pointed forward and all of us had a straight back. All of us, son. 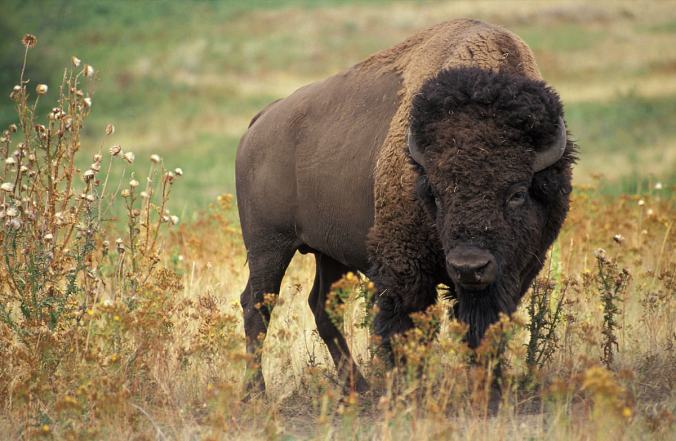 As happens, even in the best of families, some of the more adventurous members struck out on their own. They wandered east and crossed a massive land bridge known to humans as the “Bering.” After years of trekking and searching, they found great plains in North America and loved it there and thrived! They had lots and lots and lots of little ones like you who somehow over time got bigger than you will ever be – count it among the mysteries and wonders of the universe! I’m not sure about why their backs humped up like that, but never mind. Ignore Aunt Bessie, son, when she scoffs and mocks and finds fault. Cousins these hairy beasts are, I tell you, even if you have to go around nine corners to trace the roots of our common heritage.

Human that I am, unapologetic red-meat eater that I am, I ordered bison steak a few years back at a fine restaurant on the recommendation from the server. It was for me both a whim and a limb: a whim because I am not as adventurous with food as some people and a limb because this was bison after all – bison! – though, I told myself, this particular hairy beast is not in another genetic zone like, say, kangaroo, which would somehow give me pause. The steak was so good, I had no qualms henceforth.

Some time later, probably at a rare point when I was feeling less budgetly constrained than usual, I bought a package of ground bison at my grocery store. This time it was more like How about if I make burgers using special, expensive cousin-of-beef instead of the normal stuff? At about double the price, it was a treat. But every now and then, a treat is a good thing.

Samuel never had qualms of any sort about meat of any kind. He added a bit of salt and pepper and finely chopped onion to the meat before forming the patties, then grilled them. If you have never had a bison burger and can manage the scruple, try one sometime. The burgers were amazing – more tender than regular beef, remarkably tender, and had a wonderful flavor, though similar enough to beef for non-adventurous sorts like me. I was sold. A few more times in the last couple years, I spent the extra money for a superior burger.

A couple weeks ago, the whole lot of ground bison at the store was marked down to $4.99/lb. None of it was near the expiration date. I’m guessing someone in the ordering department messed up and ordered two cases instead of one, or 15 pounds instead of five, and the store knows its customers’ buying patterns and knew it would never sell that much at the normal price. My lucky day! I bought ten packages and put them in the freezer. 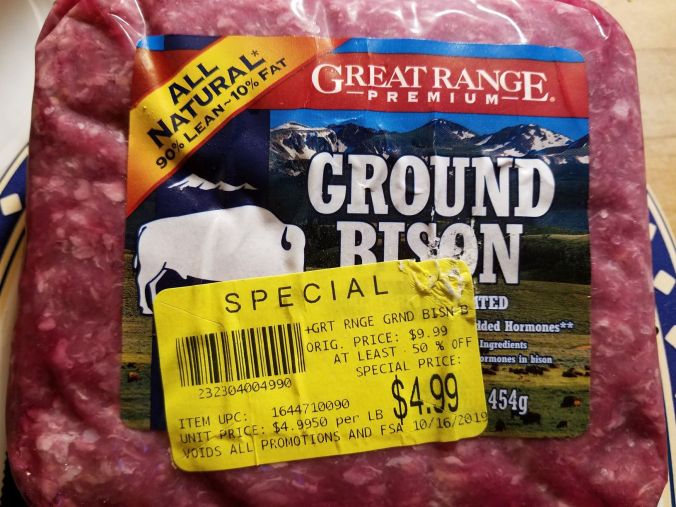 If it had not been so “cheap,” I would not have had it on hand when (fast forward) Samuel arrived home last week from a week away and Mom was just coming home from the hospital. We would all meet for dinner at Mom’s, and meal prep was on me. In a nod to Samuel (happy to have him home and God bless him forever for not moving far, far away), I asked him what he wanted for dinner.

Hmmm. Okay I said. You know how texting goes: Words on a screen that have no intonation, no body language, few clues as to the meaning of said words. Hmmm. Okay really means a pause while I think this through (I was quite certain I did not have on hand the ground beef-pork-veal combo I usually use to make meatloaf, and I also had too much else on the docket that day and knew I did not have time for a trip to the store), followed by the frozen bison coming to mind (that would be new but could work). Hmmm = pause. Okay = could work.

Don’t want meatloaf? he said, having read only Hmmm. Okay and questioning my hesitancy with no way to understand the mental gymnastics behind it.

No, sounds good. I just have to have the meat. Could make it with bison!

Bison it is then.

Wanting to make sure there was enough to leave leftovers with Mom (she was not supposed to lift anything heavier than a coffee cup the first week, let alone cook) and enough to give Samuel some to take back to his place for a meal another day (I repeat, God bless him forever for not moving far, far away), I used two packages. 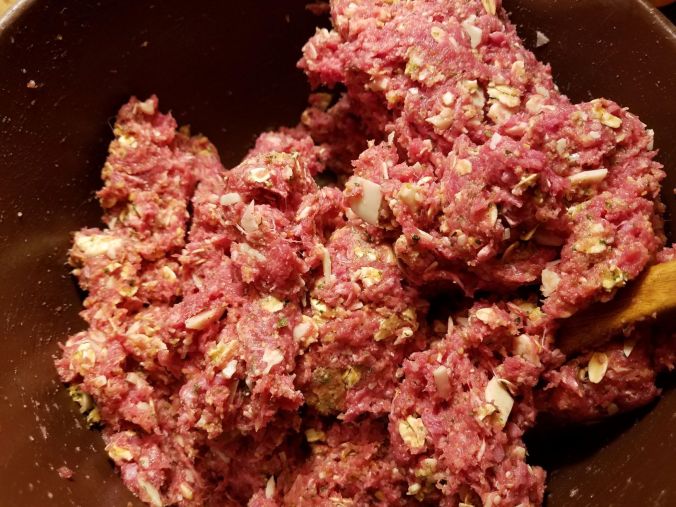 Form two loaves. I do mine free form, but you can use loaf pans if you prefer.

**I happened to have this asiago-parmesan-romano blend, which is more shaved than grated, and I thought What the heck? 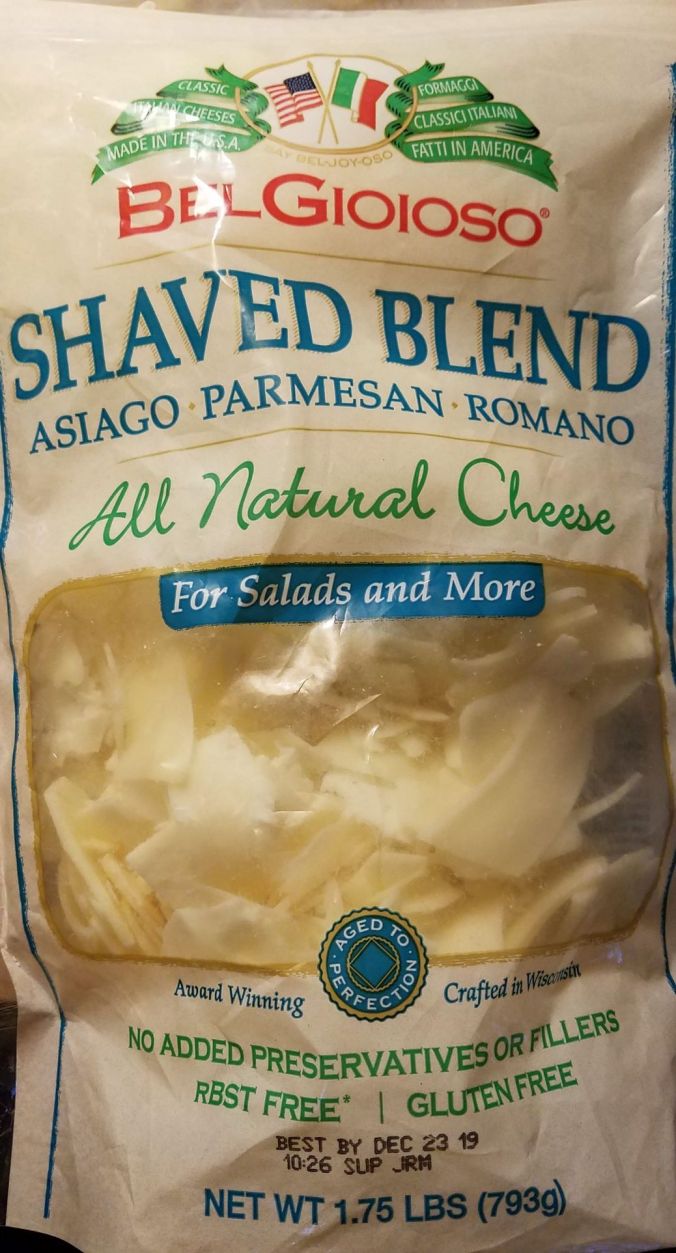 I chopped it fine 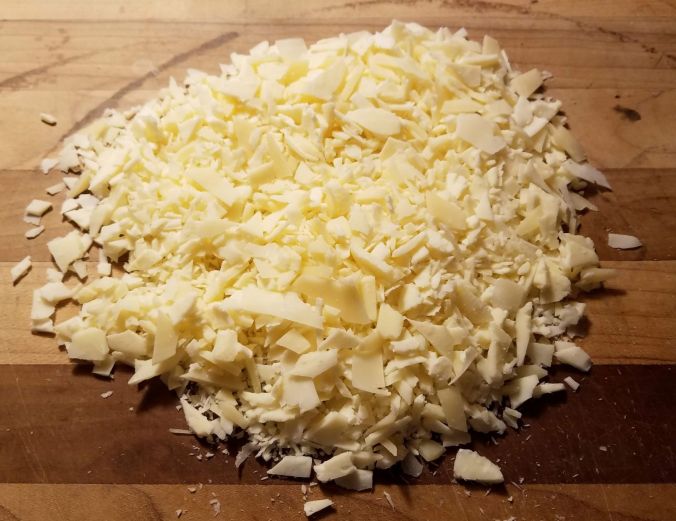 and added it instead of the grated romano I would normally use.

The larger pieces of this oddball cheese choice resulted in large blops of melted cheese on the surface of the cooked meatloaf which, depending on your perspective, looks either appealingly creamy and fantastic or weirdly blotchy and unkempt. It was delicious. I baked it for 45 minutes at 400F. The higher temp gets the outside crispy. Oh yum. 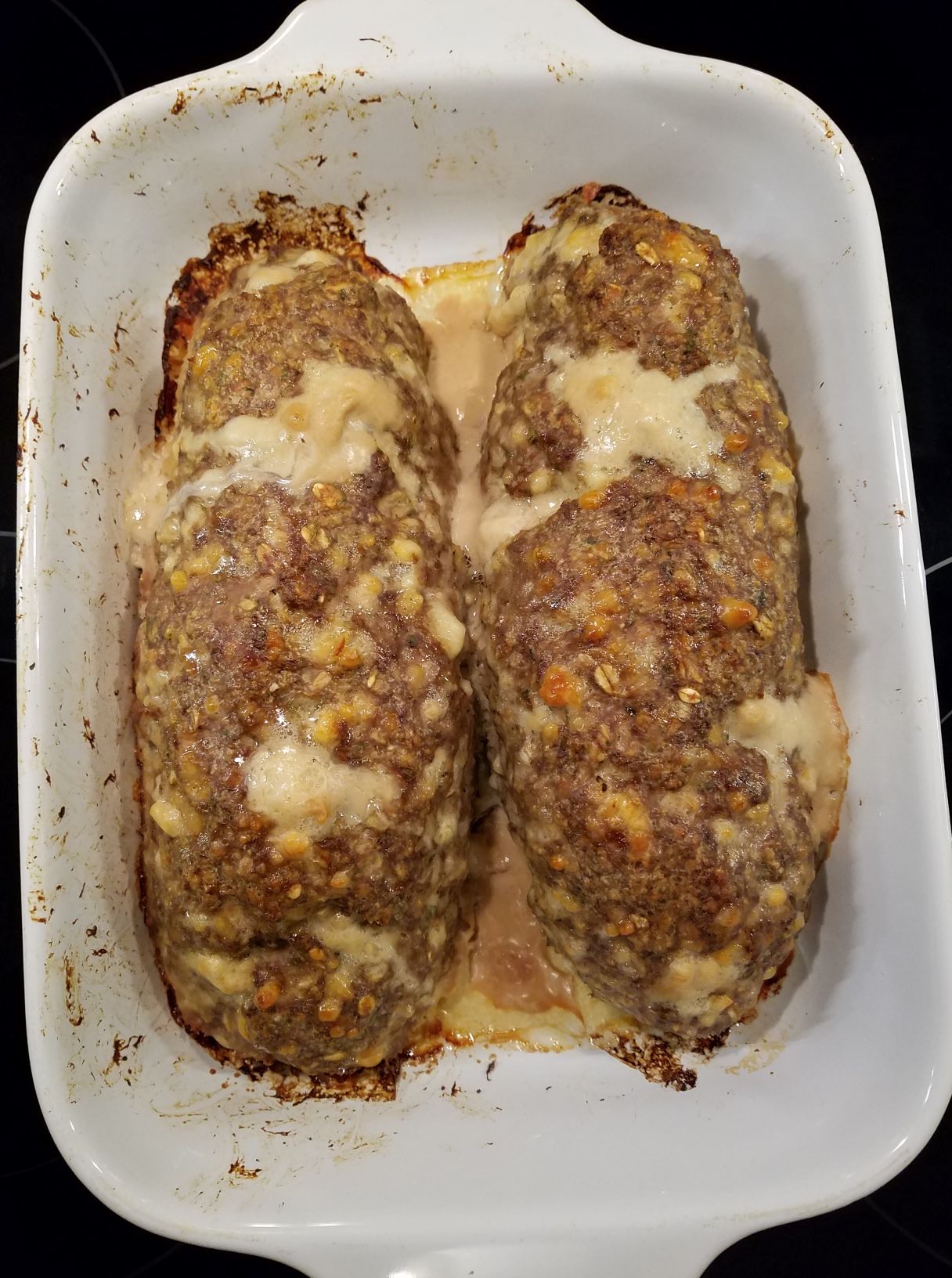 Alongside baked gold potatoes and acorn squash mixed with butter and a touch of maple syrup, the meatloaf was a hit. Mom and Samuel put ketchup on theirs, I was Plain Jane with mine, and Jerry, hmmm, I don’t remember! We ended the meal with Mom’s Apple Cake and that’s how I say I’m so glad both Mom and Samuel are home! 😊

*Thanks for the bison photo to modernfarmer.com.

***Fresh would be better but I didn’t have any and remember, no time to go to the store.

10 thoughts on “A Whim and a Limb and Then: Bison Meatloaf!”