Turtles we have seen hiding under the cucumber leaves. Once we watched her burying eggs next to the raspberries. Disgusting green horned worms we have seen on the tomato plants. A different, practically invisible (they are so camouflaged), also green and almost as disgusting green worm we have seen on broccoli (almost as because the broccoli worms lack the horns). Japanese beetles we have seen too many of — once they find the grape leaves, they munch so greedily that the leaves disappear fast. Collecting them makes a feast for the chickens. Beth used to find and destroy squash bugs. I did not want to deal with these, so I didn’t plant squash. Potato bugs are also gross; thus no potatoes, at least this year.

Today though, a snail! I have never seen a snail in the garden. It was real, hiding in one of the looser outer leaves of a red cabbage recently harvested. I know a snail when I see one. 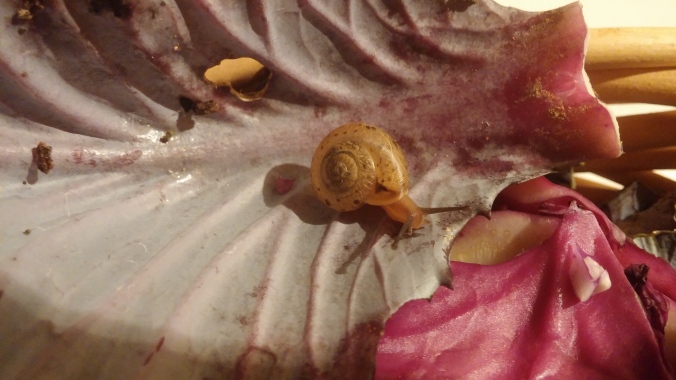 But where did it come from? How did that one snail find its way to that cabbage? Are there more out there that I have not found? Will I be battling snails henceforth?

A quick google search of “how do snails get into gardens” reveals many ways to get rid of the little creatures that are noted as both  “unwanted” and “pests.” I know I am not the most patient google searcher, but in this case I am a bit disappointed in google. I asked How do they get there, and it gave me How to get rid of them. At last count, I had only one, and I got rid of him. But where did it come from? Why is it in my garden? What vehicle did it enter on? (Surely not via its own power– snails being right there with turtles and sloths in the slow lane.)

This question very likely has a reasonable, logical answer that numerous people have taken time to come up with. I appreciate that effort, and the science behind the effort, and I would appreciate ideas anyone would like to contribute to help solve this mystery for me. But as happens (surely it has happened to you), one thing makes you wonder about something else. Today, snails make me wonder about woodpeckers and grass and wasps. As mysterious as “Where did the snail come from?” are the following: Why did that redheaded woodpecker a few weeks ago not realize that the side of my house is not a tree to peck at? Why does the grass grow extremely well in the gravel driveway and not in the yard? (I think we should put gravel in the yard so that grass will grow there!) And why do wasps have to congregate in the corner of my roof when there are countless nooks and crannies in the countless trees in the many surrounding acres that would make excellent home bases for them?

Mysteries serve various great purposes. For one thing, mysteries are at the core of curiosity. They make you ask why, make you ponder, make you think. Snails and horn worms aside, let’s think for a moment about indoor plumbing, cell phones, vaccinations, air conditioning, movies on demand and other luxuries. Most of us take these advances of the modern age for granted, but the fact is that humans did not always enjoy them, nor did they did not fall from the sky as a stroke of luck. Much of what we have resulted instead from the curiosity and subsequent brain power of various individuals asking why and how and what can we do about that. The wonders, mysteries, puzzles, conundrums and challenges that we are confronted with every day make us sharp and keep us sharp. We figure things out. Remember in The Grinch Who Stole Christmas:

The wonders, mysteries and puzzles also keep us humble. Smart as we are, capable as we are, outstanding puzzlers that we are, some things are simply unknowable. Where does all that hair come from that dogs keep on shedding? Why do people do stupid, self-destructive or hurtful things? Why does your aunt think mice are adorable and your uncle is creeped out by them? Why are peanut allergies a thing to worry about now (and they didn’t used to be)? Why are we drawn a particular man or woman so strongly that their words are gold to us, their presence a gift unspeakable? How many creatures live in the oceans?

The sharp ones among you are aware that red cabbage — indeed no edible food from my garden — will not last long in its garden state, but will soon be under my knife or in my pots and pans and then in my jars or my fridge before appearing on the table. Now here is another mystery.

Red cabbage from the garden was sitting in a basket on the kitchen counter since yesterday. It’s easy to make — you chop it up fine, steam it, add salt, pepper and some cider vinegar to taste. All by itself, however, this is not a meal (to me). How is it, then, that while grocery shopping today I came across top round sliced super thin — like flounder filets but even thinner — and labeled for bracciole? Who even knows what bracciole is? (It is pronounced bri-zholi in case you were wondering.) How often do you see this in the meat section? But there were four packages there, I promise. I can’t remember the last time I saw beef sliced specially for bracciole for sale. One of the packages, my eagle-eyes-for-bargains noted, was marked down. Hmmm, haven’t had bracciole in a while, would be yummy. So I bought it. Trust me, it relates to red cabbage.

Then Samuel came into the picture. Clearly I did not make this dish often in his childhood because he had no idea what I was talking about when I asked him if he preferred me to make bricciole or rouladen (pronounced roo-lahden). Both use thinly sliced top round. Bracciole is what you do with it when you want something leaning toward your (in this case my) Italian heritage, and rouladen is for when your German taste buds call louder. It truly has been a long time and I was pulling files from deep inside my culinary brain to try to explain the choices to him. “It’s meat, rolled up, with stuff inside… flavors…”

I was forced to recall the specifics. “Bricciole has bread crumbs and romano cheese and salt and pepper, and after you sear it in olive oil, you braise it in tomato sauce. And rouladen has pickles and onion and mustard and salt and pepper — best as I remember anyway — and it braises in its own juices.” Did I remember at that point that red cabbage goes well with rouladen? Not at all. Instead, I looked for the recipe for rouladen in my own cookbook, failed to find it there, failed to think of checking the internet for a recipe, and made the one he asked for (the rouladen) from memory. He pointed out a potential problem — that I did not have mustard — and I said Oh yes I do, in that cabinet over there. He said Those are empty, and we laughed at our different definitions of empty. There were three containers of mustard: one that said Dipping Mustard and therefore to Samuel was not mustard per se, and two (one brown and one yellow) admittedly not expelling mustard at a normal rate and in need of scraping the inside to retrieve enough, but there was plenty of mustard for this dish.

After carefully slathering the brown mustard on the filets of beef, placing (homemade!) pickles and thinly sliced onion in a proud row on each, sprinkling with salt and pepper, rolling, securing with a toothpick, searing in oil, adding a bit of water, covering the pan and lowering the heat, I walked away. Those rouladen will be yummy tomorrow, I thought. I checked my wordfeud, played some words, and smiled at funny and delightful texts I received. Some time later, I walked back into the kitchen, and there were the red cabbages, staring at me. Hello! Remember us??  We work well with rouladen!

Of course you do! I was taken in. Out came the knife, the pot. One by one I peeled off the outer leaves of the cabbage to start the process. Alas, a snail, a real live snail came into the picture. I got my phone to take its photo. But where did it come from?

I suppose I will never know, and this will remain among the Unknowables in my life. I’m ok with that, even though I just remembered that rouladen should also have bacon in it (how could I forget the bacon?). Still, I get to eat red cabbage and rouladen tomorrow! And it will be yummy! 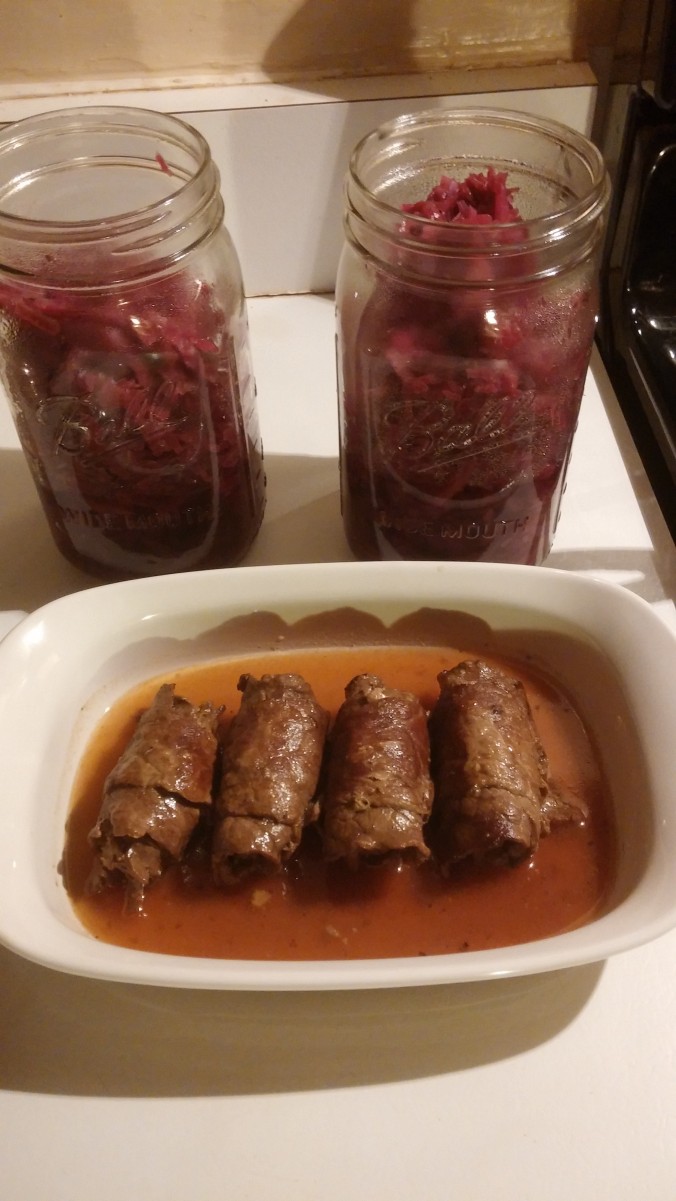