If you have used a recipe countless times, if it’s the one you think of when you need something delicious and reliable, if you have many times called it tried-and-true – yes, keep this recipe and pass it along. Let’s hear it for Mom’s Apple Cake! 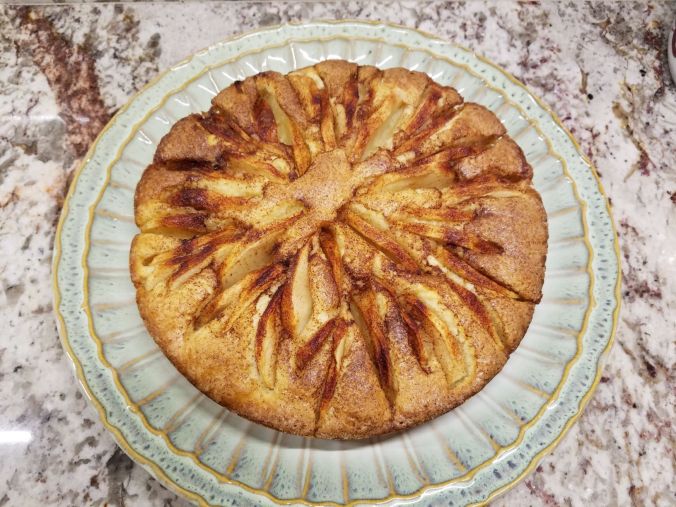 You know how old this recipe is because it calls for Spry. I venture to say some of you never heard of Spry. Now for our culinary history lesson (thank you, Wikipedia): “Spry was a brand of vegetable shortening produced by Lever Brothers starting in 1936. It was a competitor for Proctor and Gamble’s Crisco….Though the product is discontinued in most countries, there are anecdotal reports of its being used through the 1970s.”

Back in the day (and Spry had its heyday in the 1950s) you were either a Spry cook or a Crisco cook. Mom was devotedly Spry (I mean, who wouldn’t want to be spry?!). I copied her recipes verbatim, even if by the time I had my own kitchen, the thing I bought was not actually Spry, but a store brand of shortening. I called shortening “Spry” for many years because Mom did.  (I am quite certain I never converted to Crisco because it was always more expensive than the store brand and because Mom would never have used Crisco back then – maybe she does now….)

Note the way the recipe changed. First Spry, then shortening, then (when I smartened up and realized how amazing butter is) butter. Note what appears to be an emphatic obliteration of the Spry or shortening. Really, butter is better. 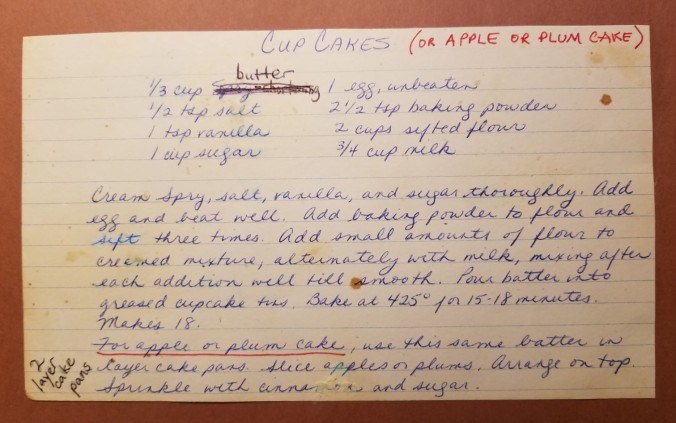 Note also that this recipe is titled Cup Cakes. Boxed cake mixes were not so much a thing in the 50s. And mixing these ingredients together does not require an electric mixer and takes very little time. I don’t follow it exactly, having found that presifted flour (is there any other kind now?) eliminates the need for to “sift three times” (good heavens!). In my head, and if I ever rewrite it on a new card, the recipe will be simpler (and it will not have all the asterisks below because that info is in my head). And since I use it for apple cake 95% of the time (only occasionally plums), I will call it Apple Cake and just make a note about the plums. And I will write it the way I do it.

Mix 1/3 cup softened* butter with 1 cup sugar**. Add one egg; mix well. Add 2 1/2 tsp baking powder, 1 tsp vanilla and 1/2 tsp salt; mix well. Alternately add and mix in ¾ cup milk and 2 cups flour***. Divide batter between two layer cake pans that have been buttered and dusted with flour. Spread batter to edges. Peel and thinly slice 3-4 apples. Arrange on top****. Sprinkle with cinnamon-sugar*****. Bake at 425F until nicely browned and a toothpick inserted in the cake part comes out clean, about half an hour. This cake is also delicious made with plums.

*Soften either by letting it sit out for an hour or so or by using the defrost mode of the microwave for 35 seconds.

**Use a wooden spoon. My spoon has a flat end that has a hole in it. Works perfectly. You could also use a whisk.

****I go for the bursting star design usually. If you have more time and want to slice the apples thinner, it’s prettier. I was tight on time when I made this yesterday. 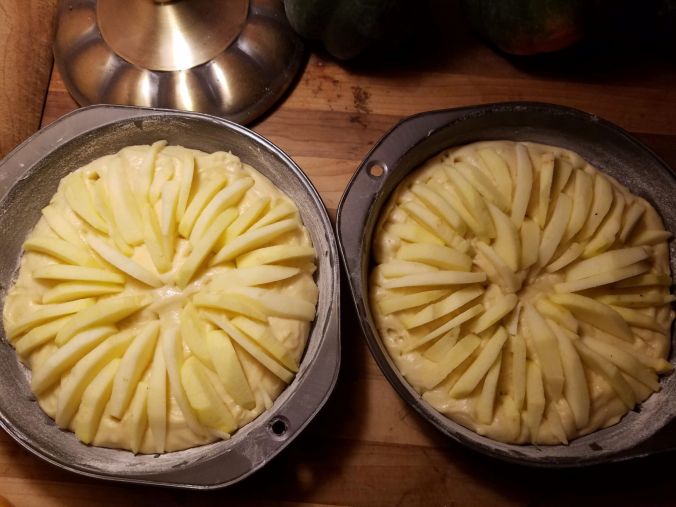 *****It is assumed that you have a jar in your pantry into which you have put about a cup of sugar and about 2 tablespoons of cinnamon and shaken it like mad (the Cinnamon-Sugar Dance!) until well blended. This jar lives in your pantry for when you need to make cinnamon roll-ups from leftover pie crust or for putting into hot farina (aka cream of wheat) on a cold morning or, of course, for this apple cake. The amount of cinnamon-sugar you put on top is up to you. Mine looked like this just before I popped them into the oven. 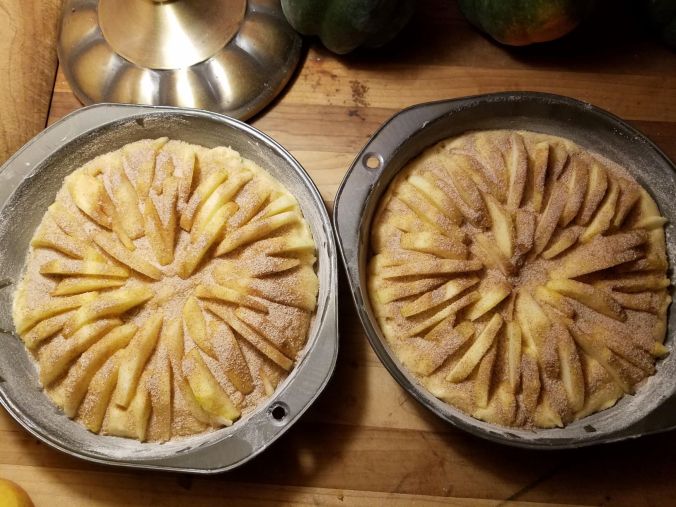 You could also top with a streusel crumb topping. Robin’s (Haphazard Homemaker) Oatmeal Streusel Crumb Topping is great and would work perfectly!

When you can, time the baking of this cake such that it comes out of the oven just about the time you serve whatever dinner you are serving so that by the time you are done with dinner, the cake is still warm but not too hot. Serve with a dollop of whipped cream if you like.

Mom and Jerry are smiling, but truth be known they are both saying: Hurry up and take the picture so we can eat this delicious cake! 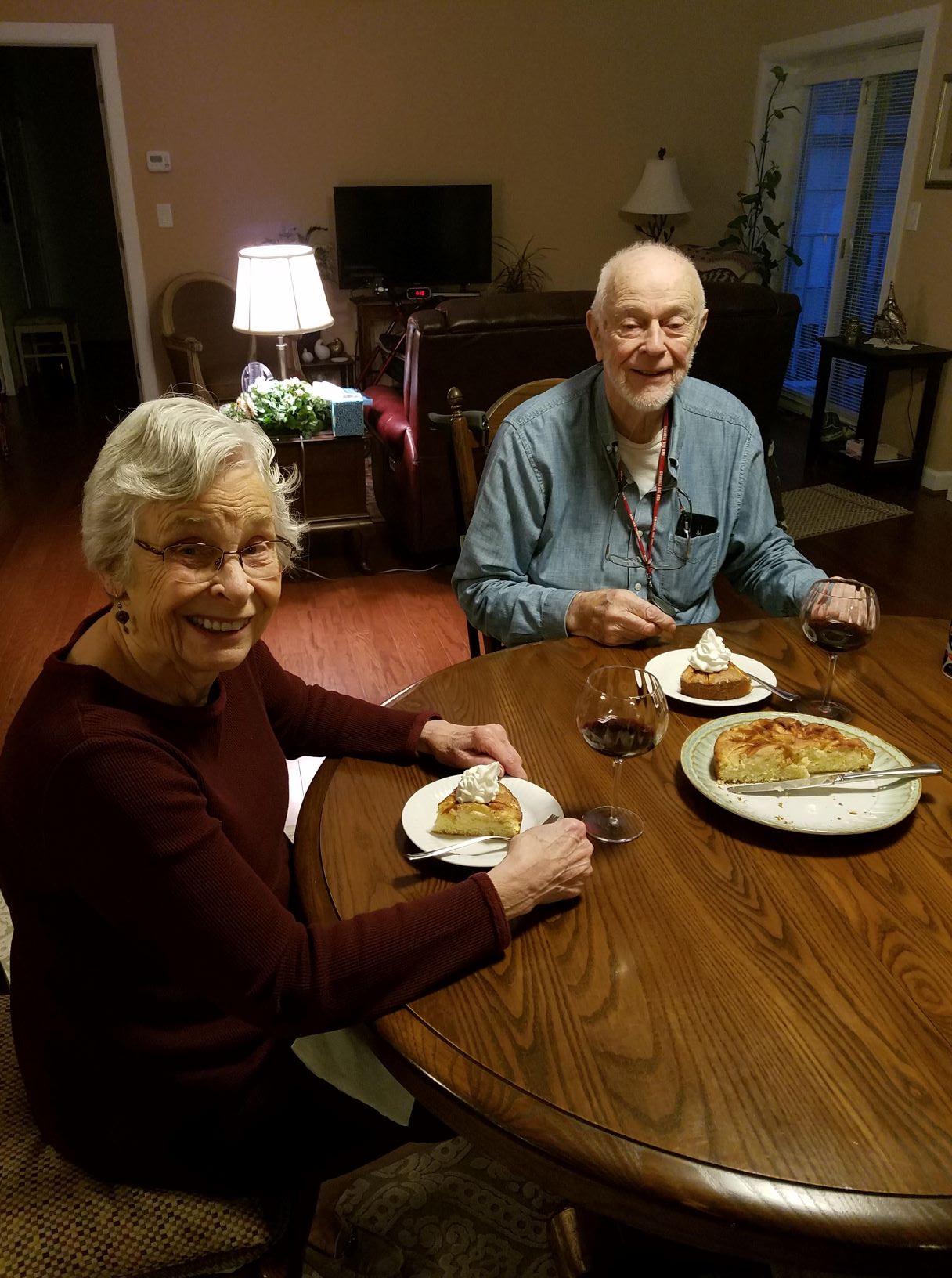