One way they amuse me is how they introduce themselves. It’s the Airbnb way that when you book a place, you send the host a note describing who you are and the general purpose of your trip. It’s often something simple like

We are coming into town for parents weekend at UVA.

My husband and I are looking for a quick getaway into the country from our hectic city life.

I’m surprising my fiancé with a night in your cottage to celebrate her birthday.

My guests are happy that I allow pets, but I want to know they’re coming. It says so in the description. People take time to assure me that their dog is a good dog and I will not have to worry. This is all good. I appreciate when guests leave extra for cleaning up after shedding dogs, which I also suggest (but Airbnb’s system does not allow me to impose) and maybe one in ten remembers, but that is another conversation.

The amusing part is how often the person writing the note tells me their dog’s name right up front – to the exclusion of any other name but their own. I don’t ask for the dog’s name and I don’t have to. For example, this one, for two adults:

My wife and I have some friends in the area and will be checking out some of the local wineries with them. We will be bringing our 40-pound Bassett hound Sasha. She doesn’t bark much and will be crated when we are not there.

Or this one, for two adults and two children:

We are excited about staying at your place. It was the first place that caught my eye when we started looking for a place. We will be bringing our sweet golden retriever, Lola.

I love the dogs that come.

Last week I had a 10-month-old Great Pyrenees named Indy (already 70 pounds!), a few days ago a (white) English golden retriever named Lola, right now a 3-year-old French bulldog named Thor. Sierra has been here twice and never wants to leave. Bardo killed a chicken back when the chickens sometimes clucked and scratched around the yard – he thought it was a toy? – and those guests (presumably on account of deep humiliation) never came back. Millie circled the new and improved (read impenetrable) coop a thousand times in two days – surely there’s a way in to those birds!! Here she is: wishing, plotting, hoping, studying. 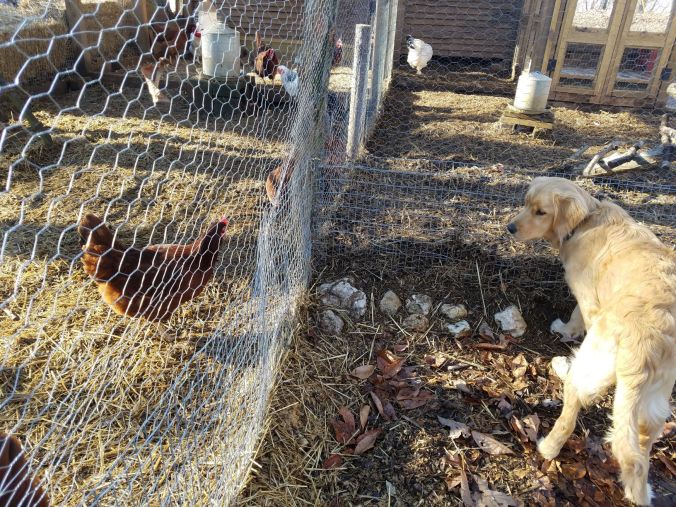 This is Lola playing (incessantly) with Sandy’s dog Maggie.

This is Thor, a French bulldog, who with serious attitude gave Maggie a run for her money. They occasionally rested.

Point is, people tell me the dog’s name. Often I have to ask for the people names.

I like to know everyone’s first names because I write little welcome cards that start with Dear _____________ and ___________… Everyone loves to see their own name written down, right? (In cursive with real ink on real paper no less – am I wrong?) So I write back telling them how delighted I am that they want to stay at the cottage and then asking for first names of whoever else is coming (now that I know the dog’s name) 😊.

I wonder why the person booking the cottage often tells me the dog’s name but no other names. Is it because they are so familiar with their wife/husband (fiancé/mom/girlfriend/whomever it may be) that it doesn’t occur to them that not everyone knows that name?

Is it because other hosts have never asked for first names because they don’t need or want to know?

Is it because they say the dog’s name so often? As in Thor, No! Thor, Come! (I use Thor for this example even though the wonderful guests who love him did not yell at him like this. I want to use it because I love the name. Best name ever for a French bulldog.) Considering a dog’s limited scope of vocabulary and our human propensity to fill the air with spoken words, maybe they say the name at home over and over and are just used to saying it, including it?

Maybe it’s because they are so attached to their dog and they want everyone to love him/her? The lady who booked the cottage for her family (that includes Lola) told a wonderful story. She said she had, as a young child, watched her sister being attacked by a German shepherd. “She lived,” she said, which tells you the extent of the injuries, but this left a huge fear, a huge NO when it came to having a dog in her own family many years later. Her daughters wanted a dog though and she wanted them to have one but resisted strongly until one day she saw an English cream golden retriever puppy that was “literally the cutest thing I ever saw in my life.”

This is what one of these puppies looks like, in case you are wondering. 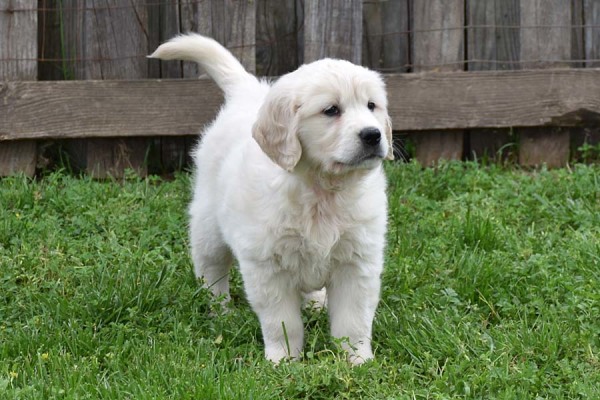 She relented, regretted the decision for the first six months, and now loves this two-year-old dog, who is friendly, gentle, gorgeous and perfect.

I think people tell me the dog’s name because they love the dog so much. I get it. Coco is leaving home soon, as Samuel has found his own place. She won’t be far away, and he says I can go snatch her during the day if I want to, but she will no longer snooze on my lap like this on a regular basis. I will miss her. Yes, even this face I will miss!

I need a dog of my own sooner or later. What kind, I don’t yet know. And I wonder what her name will be 😊

9 thoughts on “The Dog’s Name”