You know how you get invited to an event sometimes that’s outside your normal scope and is either exciting all by itself or exciting because of where it is or who else will be there, and you can hardly wait? And other times you get the invitation and your mouth makes a weird shape – the kind that’s trying to form some variation of Oh, yay! but just can’t because you are at the opposite end of the excitement spectrum? And other times you are smack-dab in the middle and the best you can come up with is Eh or Okay?

I generally veer toward Eh when I am unsure. Combine Vagueness (various aspects of the event are unknown)

with Else (going requires me to switch mental gears)

with Extreme Overall Body Soreness. It has been a week of gung-ho carrying/ placing/ leveling/ finagling 50+ cinder blocks as well as shoveling tons – has to be tons – of dirt and “crusher run.”

Add an unexpected memorial service to the week and I am ambivalent. But I said I was going so I’m going. I had RSVP’d YES to this thank-you-to-CASA-volunteers event weeks ago. On the upside, it would be a reason to put on something besides overalls, and there would be great food and drink there, and nice people would be commending important work, I was sure of that. And doesn’t it often happen that once you get there, it’s so fun and amazing that you wonder whatever made you hesitate?
But the venue, “Royal Orchard” – never heard of it.

I worked in hospitality for years, a job that requires you to know about local attractions including wineries, breweries, cideries. Royal Orchard kinda sounds like it falls into that general category, don’t you think?

I could have looked it up. I could have asked around. Even if I had, it would not be found in a printed or posted or anyone’s mental listing of local cideries. That’s because Royal Orchard is a private home. They don’t sell apples, they don’t make hard cider, they don’t have a pumpkin patch and they don’t make donuts for tourists, though it turns out they do have a vast network of walking trails open to the public. Who knew?

We turned off the main road onto Royal Orchard Drive and started climbing a single-lane road up, up, up the hillside. Slight curve, serious hairpin, up some more, up, up, up. No mile-markers, but it has to be right. There were no other roads. Suddenly the house appears before you.

This is the Royal Orchard “Big House,” or as much of it as would fit in my camera’s viewfinder. The host of the event, who owns it along with “about a hundred of my cousins,” said his great-grandfather did well (I guess!) in the railroad industry and built the house (or let us more correctly say had the house built) around 1913. 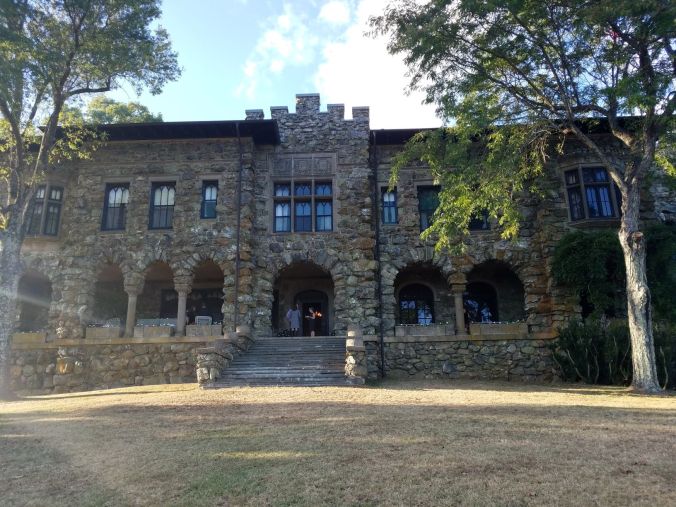 This is the side driveway. That building way over to the right seemed to be some sort of carriage barn.

That’s a lot of stone.

The interior is lavishly furnished in period style. This is one of the (I stopped counting at 15) bedrooms. 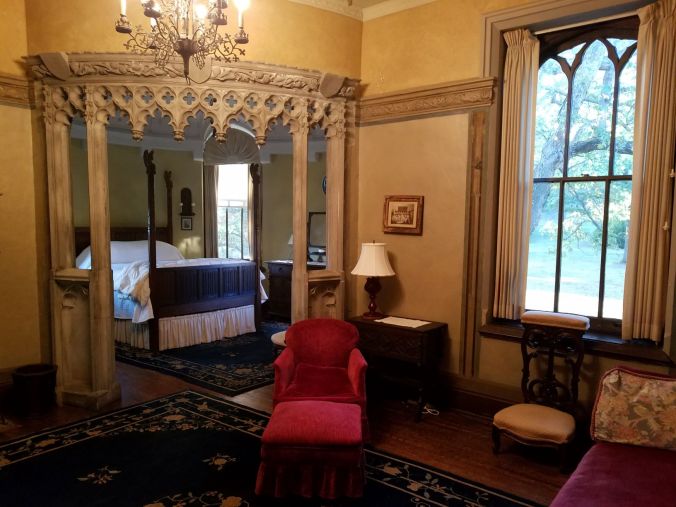 This is the view. 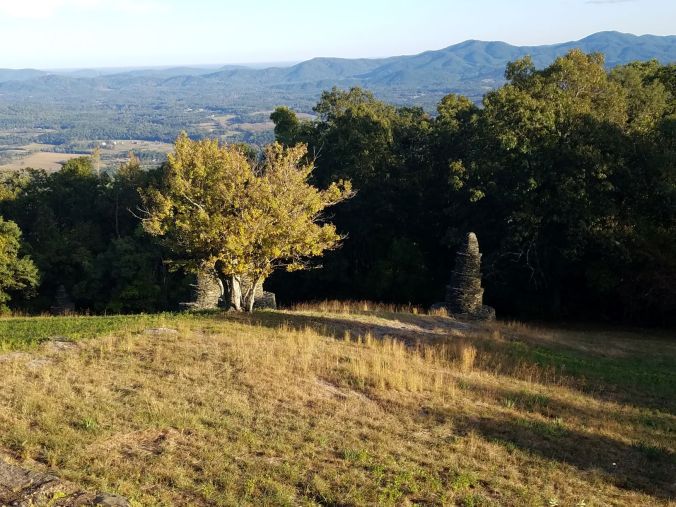 If you adjust the lighting and look carefully at the foreground of the view, you see a curious thing. Four curious things. See them? 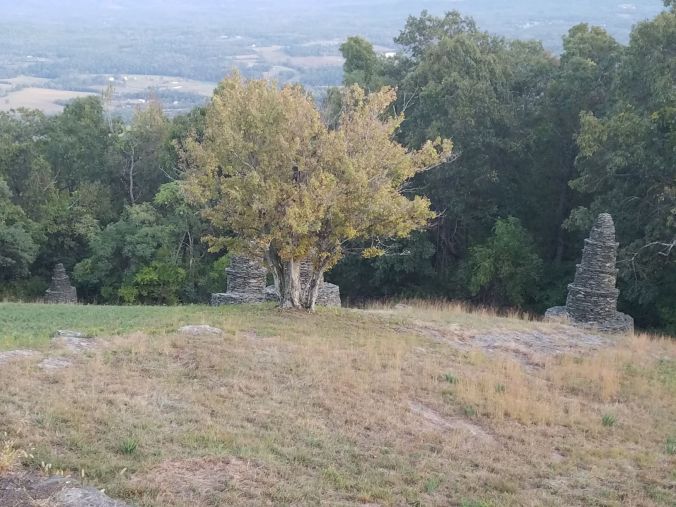 Zooming in doesn’t really help figure out what they are. 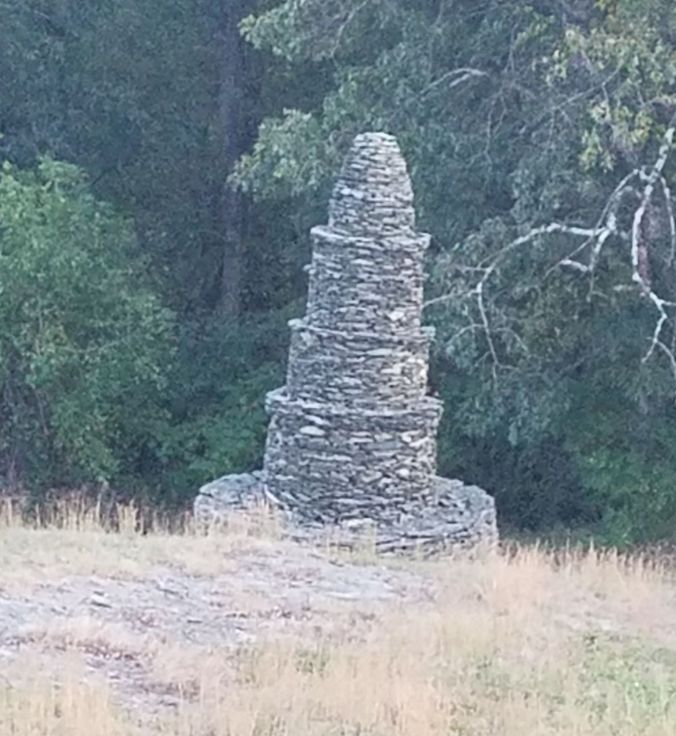 I want to know your guess.

Glorified grain silo? The door has to be around the back.

Primo-natural rock-climbing wall? For the outdoor experience that is not a mountain.

Tomb? The grandfather? But then who are the other three for?

Monument? To those who did all the work? (I can hope!)

Above-ground dungeon? You would not hear the screams from the house.

Newfangled monolith? Who says it has to be just one large, upright stone? These Virginians, they do what they want and call it what they want.

I got to thinking about all the built things I look at and wonder about. Why is it there? Why did they build it like that? Who thought that was a good idea?

Maybe there’s not a good answer.

Maybe there wasn’t a better thing to do. Maybe someone was bored and made the thing absentmindedly. Maybe they goofed. Maybe they were sure it would come out nice and it just didn’t. Maybe they wanted people to wonder in a hundred years: What is it? and be dumbfounded. (Funny little joke – think they’re still laughing??) Maybe they assumed a legend would arise. Maybe not everything is purposeful.

I think someone buried something in there. Not necessarily a corpse, though the Edgar Allen Poe part of my mind has to entertain the possibilities of even gruesomer images. But more like a time capsule. You could argue that the house serves that purpose, and be right, but something more personal maybe.

What would you put in a box and tuck into a stone tower for someone to find in a hundred years?

8 thoughts on “A Mystery at Royal Orchard”