When you go to Sarasota, you really have to stop in and see The Ringling. I hardly know where to begin. Oh, wait, I did begin. I told you about the garden gnomes and the banyan trees and the roses in the rose garden already in Florida Curiosities. Creepy/ amusing/ freakish/ enchanting as those gnomes might be to you, fascinating as the banyans were to me and lovely as the roses are (hopefully) to everyone, these were just the beginning.

We started at the art museum. Its gorgeous courtyard includes a replica of Michelangelo’s famous David. 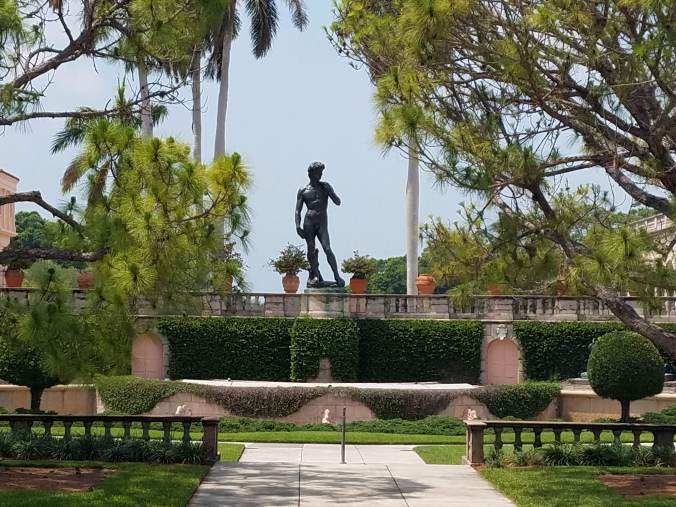 I realize that not everyone would be as enthralled as I was with the marble walkway up near that statue, but, I mean, look at what you’re walking on. Some unknown, very talented team of laborers a hundred years ago chose which piece should go next, how to organize the colors, which way to turn each piece so that it best complements the next piece – its own kind of puzzle.

And this is no short or narrow path. Do you think the design is random?

Hey, Jack, hand me another piece.

No, I think more thought than that went into it… 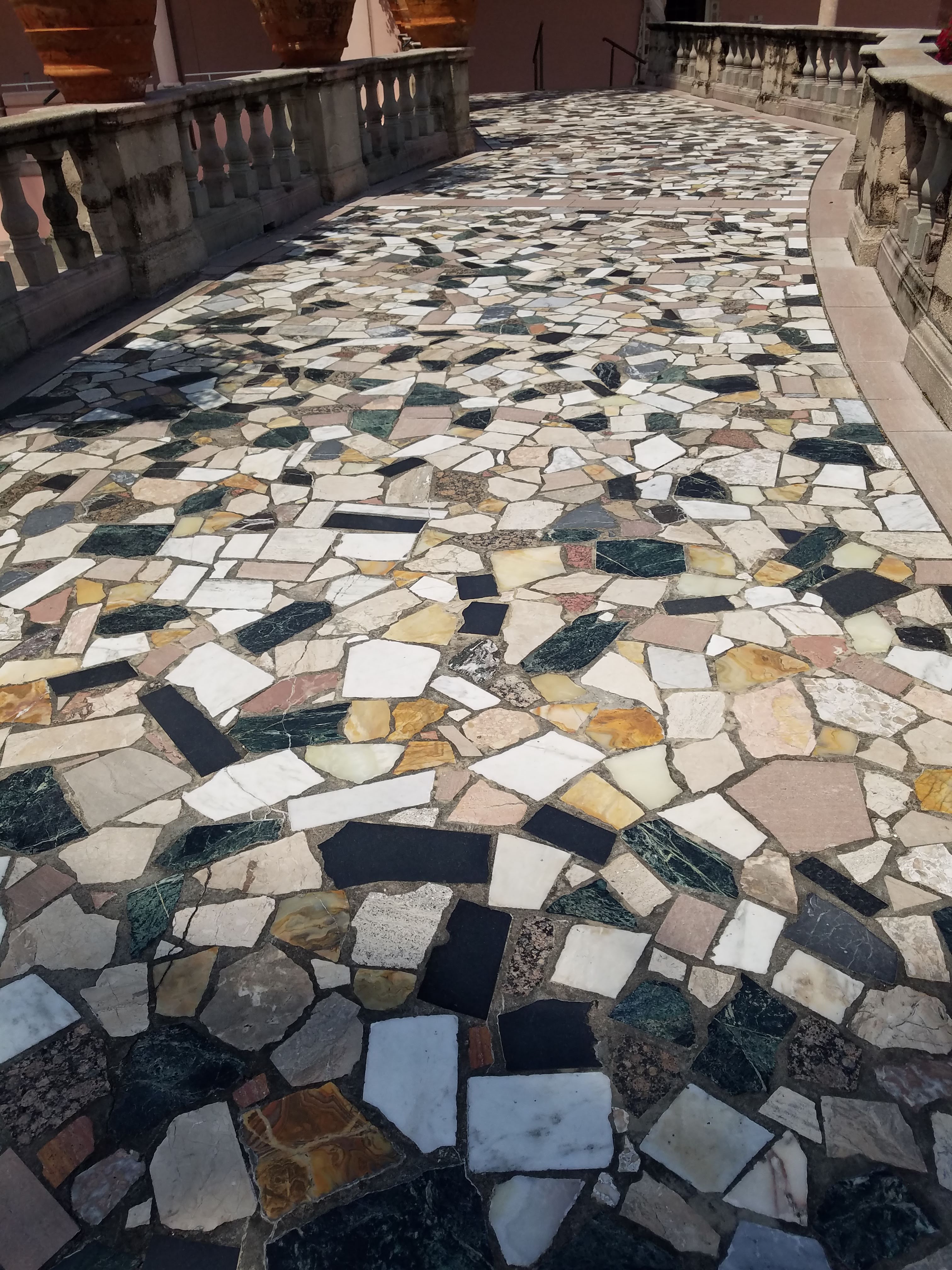 We went from the walkway to the armor exhibit. This is the real McCoy, authentic armor worn by men four or five hundred years ago who were much smaller than today’s men. The knight on the horse doesn’t look that small…

…but when you look at the sampling of upper-body styles, you think maybe these guys didn’t eat as well as we do. The lady there told us a guy of about 120 pounds would fit in them.

Anybody for a sword?

The courtyard, armor and the art museum were all worth every minute, but besides the charming gnomes (here’s another for your pleasure – dontcha just wanna hug her??)…

…the best part of the day for me was seeing the circus. Well, not exactly the circus. You start in a room with old-time posters like this… “Presenting 600 Educated Animals” – Educated?? 600??

…and this. “Hilliary Long Defies Death in His Thrilling Head Slide” (oh, my! looks to me like an upside-down slide on a descending tightrope – guessing he wears some sort of cap with a groove in it for the tightrope??) and “The Most Novel, Moral and Entertaining Exhibition Ever Given Under Canvas” (moral?) and “Mile-Long Massive, Magnificent Street Parade (who wouldn’t want to go to the circus??).

The next room has some of the leftover equipment they used, such as the truck converted to use for the human cannonball.

Yes, human beings of sound mind loaded themselves – feet first – into the barrel of this thing, which by means of air compression shot them out approximately 200 feet (60 meters) onto a waiting net (hopefully they landed on the net, assuming they did the math right and nothing went awry). Hugo Zacchini, a circus performer with two engineering degrees and later an advanced degree in fine arts, who could also speak or interpret eleven languages, was discovered by John Ringling in 1928. He and his sons joined Ringling’s circus and continued performing this famous, thrilling and death-defying act for years.

Death-defying. As if the guy sliding upside down on a descending tightrope is not risking his life. Or the lady on the trapeze a hundred feet in the air. Or the guy in the ring with the lions or the one swallowing a flaming sword.

The Ringling wants to give its visitors an idea of what the circus was like – not only what ticket-holders would see, but behind the scenes as well. It’s a fascinating look at the massive operation. Can this miniature version (1/16th scale model) that is super neat and clean (way neater and cleaner than reality would dictate) possibly give the idea of the magnitude of the operation? For example, thousands of people – 5000-8000 typically, but as many as 15,000 – came every day to see the animals and the acts. This three-ring “Big Top” reproduction is just one of many tents in the 3800-square-foot exhibit.

Another part of the miniature exhibit shows the “midway,” where visitors could see the fat man, the tall man, flame throwers, the bearded lady and other very well paid “freaks,” and get shaved ice and popcorn to eat.

This next part shows the dining tent. All the performers and crew of course had to eat – a whopping 3900 (!) meals a day were prepared and served. Anyone who has worked in the restaurant or hotel business can appreciate how efficient the staff had to be to make this happen.

Each person had a designated seat! China plates, silverware, a water pitcher and condiments too. Imagine how much food they would need. Records indicate that a typical day’s order included two barrels of sugar (not sure how big a barrel is), 30 gallons of milk, 36 bags of table salt, 50 bushels of potatoes, 110 dozen oranges, 200 pounds of tea and coffee, 226 dozen eggs, 285 pounds of butter, 350 pounds of salad, 1300 pounds of fresh vegetables, 2220 loaves of bread, 2470 pounds of fresh meat and 3600 ears of corn. My mind cannot wrap around those quantities.

To say nothing of the animals that are also hungry every day. Where did they get the food? Imagine the expense. Imagine how many animals are needed to feed the animals…

The “Menagerie” was another important and popular part of a visitor’s day at the circus. A valid case can be made that exposure to exotic and interesting animals – then as now—increases awareness and understanding, which (I would like to think) improves the animals’ well being in the big picture (even if, for some, it is not the best life). 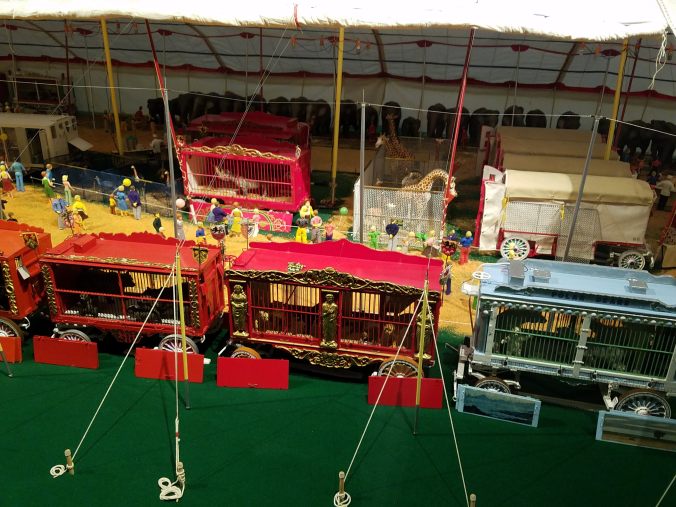 For many people back then, the circus was the only time in their lives that they would see animals from other parts of the world – zoos being rather uncommon. Think about the trains that carried the circus from town to town – about 16,000 miles per year on average! – giving kids and adults in remote places, with few other options for entertainment, a window into a fascinating world available to them in no other way. During the late 19th and early 20th centuries, movies were just beginning to be a thing, forget about television. The circus also gave performers who love to perform a new audience every night.

Like so many things, it wasn’t perfect. Like so many things, through today’s lens it would be seen as fraught with problems, inconsistencies, unfairness and worse. But for many decades, starting in the mid 1800s when railroads made a traveling extravaganza possible, the circus brought color, fun, fascination, education, thrills and entertainment (and employment) to countless thousands.

I think if you were a kid back then, in some small town far from everywhere and you found out that the circus was coming to town, you might be good and glad to go see what there was to see – the animals, the lady on the swinging trapeze, the elephant walking regally through the big top. You’d probably see it the way The Ringling chose to display it – bright and extensive and amazing. You might like the giant sea elephant best. “Wow!” might be all you could say… 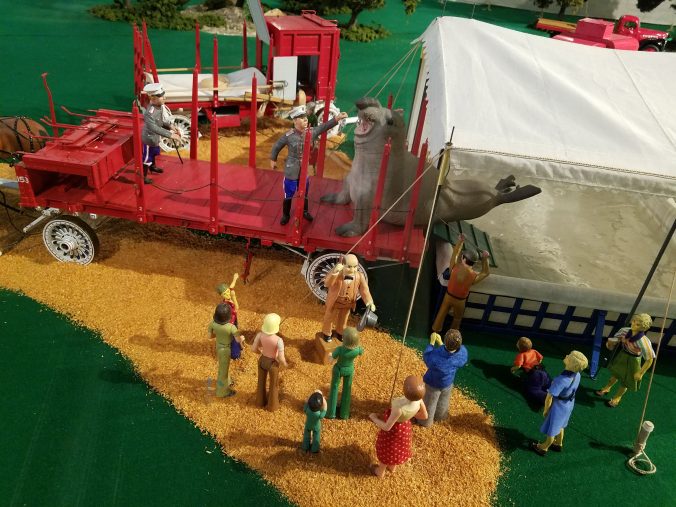 4 thoughts on “Massive and Magnificent”