Something bad almost happened this past weekend. It didn’t, but it might have. Perhaps an unseen mechanism, a force I cannot put my finger on, came into play, like the one that keeps thousands of bats from bumping into each other in a pitch-black cave. Perhaps the confluence of circumstances simply sum-totaled into not-a-disaster, so instead of the standard butterfly effect, where small, seemingly insignificant things having a surprising effect on a complex system, small, seemingly insignificant things actually saved the day. Perhaps divine intervention, the hand of God, moved the pieces on the playing board.

I’m going with the hand of God, but the bats always intrigued me. My children had a wonderful book called Animals Do the Strangest Things.* It includes the lion who “lets his noble wife do most of the work,” the platypus that may be “left over from a long, long time ago” and the “dear, long-nosed, gentle giant [elephant] one of man’s best friends in the animal world.” In the very short chapter on bats, we read about the squeaking sound bats make and how it “bounces right back” when it hits anything in its way (including other bats), so that he “knows there is something there” and can avoid bumping into it. 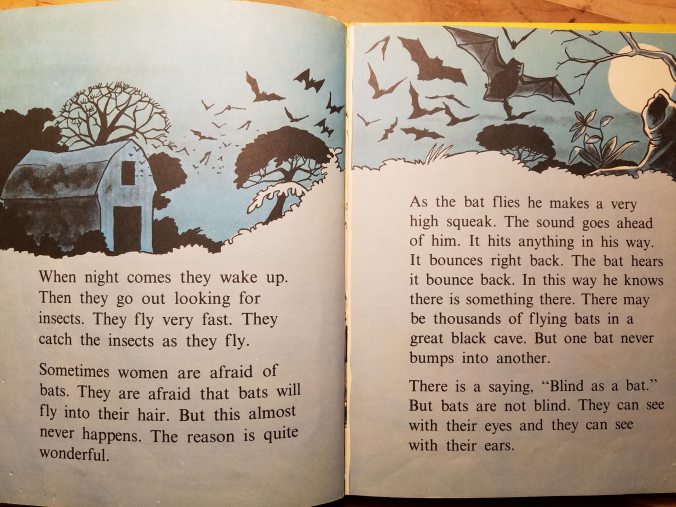 The bats not bumping into each other in the cave always make me think of how many collisions/accidents/mishaps don’t happen, how many we somehow avoid, how much more pain, loss and heartache there could be, but isn’t.

Cottage guests here this past weekend came in separate cars and parked them in the driveway circle in such a way as to block my car and prevent other cars from getting close to my house. I understand. It had been late when they arrived the night before, and they probably didn’t even see that it was a circle. Were I a visitor, I would have parked where they did too. But Lynn and Billy, my sister and her husband, were going to pick up Mom and Jerry on their way here for a visit, and they would need to get close to the house – the less walking across my driveway stones, especially in bad weather, the better.

I needed to go ask my guests to move their cars. You can’t do this too early in the morning on a Saturday. You don’t want to disturb guests. But it was getting on toward 11:00 and I expected Lynn and Billy soon. I did what I had to do. I knocked on the cottage door. One of the lovely women staying here for a girls’ getaway weekend opened the door in a friendly way, invited me in and was completely understanding when I explained my request. She couldn’t have been nicer. I had hardly finished asking when I noticed some of the others gathering their keys to go move cars. All good so far.

That’s when I glanced over at the wood stove. I was actually quite pleased to see live coals through the glass, and remarked happily, “Oh, look, you were able to keep the fire going.” I said this because when one of the women had checked in the day before, she had seemed skeptical about the wood stove and her/their abilities in regard to it. In fact, she had said, “There’s no way we can screw that up, right?” She was by herself at that point, having arrived ahead of her friends.

I had explained its simple operation, in particular the lever that adjusts the amount of air allowed into the inner space. The more air, the hotter it burns, I explained. To the right is more air,

to the left is less.

When I glanced over, all I saw was the glow of hot, live coals in the bed of the stove through the blackened glass. I surmised that someone in the group was familiar with wood stoves and had overseen the loading and tending. Many of my guests love the wood stove. For some it’s the highlight of their stay. “I spent hours in front of the fire. It’s so relaxing,” one of them wrote recently. Controlled fire is good, warm, comforting. And clearly, on this cold Saturday morning, it was low and could use more wood.

“While I’m here,” I said after some of them went out to move cars, “how about if I load the stove up again for you?” I saw that the inside supply of wood was also low and I could load that up too.

“That would be great,” she said.

I got an armful of wood from the outside pile, brought it in and filled the stove. I went out again for more, and again for more – filling both the stove and the inside hopper. This took five minutes at most. When I came in with the last armful, I saw a blazing – and I mean blazing – fire going in the stove. The only way for it to get going that well that fast is if the lower ash box door is open, such as in this photo.

The ash box is useful and necessary, but not for guests. As wood burns, it creates ash that falls through the slits in the bottom of the stove and into a removable box. Every few days, if wood is continually burned in the stove, you need to empty the ashes or they will build up and block the air flow. The door, which has a very tight seal, opens with the wood-handled lever you see in the photo (wood because otherwise it’s too hot to touch). You open it, pull out the ash box, empty it in the garden where the ash helps the next generation of plants, put it back in and close the door up tight. The guest should never have to worry about this bit of maintenance. I had not said anything about opening the ash box door.

You can’t even see this door unless you get down on the floor. You have to know it’s there, and you have to have some experience to know that besides being an ash-collection system, opening it even ever so slightly (and leaving it that way) will result in more air – too much air – getting into the stove and causing the fire to burn very hot. Untended and left open, very quickly there could be a fire in the stovepipe. Or worse.

Thank God they left too many cars in the circle. Thank God I had a reason to go over there and came in when I did. Thank God I glanced over at the stove. They were shortly going to leave to go out wine-tasting at some of the local vineyards and then out to dinner. I closed the door up tight, explained why it needs to be left that way and carried on.

Bad things happen sometimes, it’s true. Sometimes it’s beyond bad – it’s horrible, tragic, devastating. Sometimes it veers into the unthinkable. We all can bring to mind examples of how bad bad can be. On Sunday night we watched another: Loving Pablo, a film about Pablo Escobar’s reign of horror in Columbia in the 1980s. My fire-that-didn’t-happen, even if it had happened, doesn’t even compare. No question though, stress happened and fear of what might have happened happened. Rethinking how to explain the wood stove operation happened. But bad fire did not happen. Thank God.

But tell me what you think: Should I tell my guests about the ash box? Should I tell them what it’s for, what it does and to leave it alone? Should I take the chance that people will do things because you tell them not to, or trust that they will leave alone what you tell them to leave alone, or take the chance that they will not see or open the ash box door (or worse, leave it ajar)? I know there are no guarantees in this world, that accidents happen. We all know you can take every precaution, and accidents will still sometimes happen. No matter what you do, bad things will still sometimes happen. But I do not want to live in fear or be straight-jacketed by it. Humans have been responsibly tending fires for untold numbers of years, and I do not want to get in the way of my guests doing the same and gaining warmth and pleasure from it. The question is: How to present the information.