Last week Jerry decided to get a smartphone. I give him a lot of credit. His jitterbug served him well. It made and received calls the way a landline can’t – he could take it with him when he left his house and it would work. But he wanted a smartphone, so we went to Verizon and got him a smartphone. Jerry will be 89 in January. 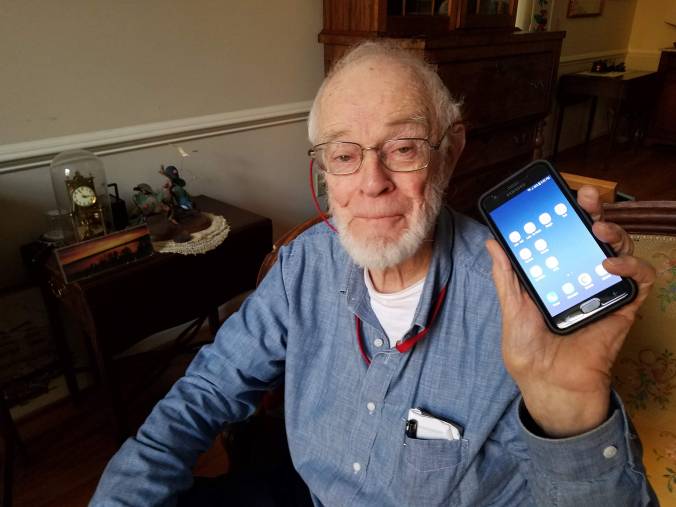 Going through this process with him, helping him choose one and then, most importantly, figure out how to make a call, has opened my eyes (yet again) to the things we take for granted, the things we have learned but don’t remember we actually had to learn, the things that are not as self-evident as they might appear. For example:

Your smartphone can be “on” but not “on” and “off” but not “off.” The power being on and the home screen being visible are two different things. Another way to look at this is that the phone can be on but the screen can be off. Problem is, when the screen is off, it looks like the phone is not “on” (though it might be and probably is, but it depends on whether the power is on). The little button on the side (or the back, or the bottom, depending on where it is on yours) turns the power entirely on or off only if you hold it down/in long enough, but once the power is on, you have to press that same button – but not for as long! – to get a visible screen and for your phone, which was “on” before, to appear “on.”

The amount of touch, the very weight of the tip of your finger on an icon so that you can get from one screen to another, is not intuitive. Those of us who graduated from one cell phone to the next don’t realize how we have adapted to the incremental changes in technology. Somewhere around here I have my first cell phone, a gold-tone Nokia that I could not find to take a picture of (but I did find some scarves I was missing!!). I got that Nokia in 2001, and all the buttons were physical – you pressed them and heard a click and that made something happen. My next phone was a flip phone – how cool was that!? – physical buttons still, and with three letters of the alphabet on each of the number pads, you could even text. (You may remember that you had to hit the 1 once to get A, twice (fast) to get B and three times (fast) to get C, but hey, we could text!!) From there I went to a flat screen where there are no physical buttons. That was a bit of a learning curve, but I needed it for work and everyone around me seemed to manage it, so sooner or later I got comfortable with that too.

I get to my phone list. Touching that icon with just the right amount of pressure takes me to the screen that can toggle between RECENTS (a reverse-chronological list of calls made and received) and CONTACTS (my full phone directory including all numbers I have saved in alphabetical order).

If I hold the tip of my finger on that same icon too long, I don’t get to my phone list. It gives me other options:

These other options have their place , and I might even use them someday, but if all I want to do is make a call, and I get these other options instead because I didn’t judge the amount of finger-pressure right, I might (rightly) get frustrated. And it’s not just the phone icon that gives you other options when you hold it down longer.

Randomly hitting buttons will affect your phone’s operation. When Jerry first got his phone, I spent an hour or so with him going over HOW TO MAKE A CALL. I wrote it down step by step, which thing to press and what you will find when you get there. Repetition, repetition, repetition is the name of this game. I came back the next day and found numerous screenshots in his gallery. He does not know what a screenshot is, let alone how to make one. But clearly he hit the home button and the power button at the same time – numerous times – and inadvertently made numerous screenshots.

This morning Mom called me to say that the two of them were “practicing” making calls, but his phone wasn’t ringing. It was just buzzing. Sounds to me like he turned the volume off, Mom. And I walked her through finding the Volume Up button and pressing it until she saw the horizontal blue volume bar that appears at the top get increasingly longer. Oh, that works. Clearly he hit the Volume Down button enough times to inadvertently turn off the volume.

But who thinks this through and realizes the difference? Again, those of us who have been incrementally learning this stuff have learned to swipe when the green phone icon is big and there are arrows moving in the direction of the needed swipe and to touch when the green phone icon is small and the tiny word ANSWER is underneath it. If you are new at this, if you have never used a touch screen before, you don’t necessarily, intuitively, know when to swipe and when to touch. As Jerry puts it, you just want to answer the damn phone.

The challenging nuances of making a call seem unnecessarily cumbersome until you are familiar with the process and have begun to appreciate the value of the many options you have regarding each and every call. But think about it, a four-year-old can learn a foreign language much more easily than an adult of almost any age. Likewise, making the switch in one leap from a mechanical device that serves simply to make and receive calls to an electronic device that can also turn your lights on when you are not at home, track your children’s precise whereabouts and translate a piece of foreign text in a flash is a very big leap.

My Aunt Judy put it well in an email to me this morning:

It’s tough “teaching” us “oldies but goodies” stuff that’s technical, but what goes around comes around. I remember trying to tell my aunt how to operate the “stereo” (young ones probably don’t even know what that word is ??????). Anyway I kept thinking, “But it’s so simple!”  Oh well, now it’s me – you tell me, and it sounds good, but will I remember it tomorrow????   Hey, we oldies are happy to have our feet hit the floor every morning.

Amen to that. Let us ALL be happy to have our feet hit the floor every morning!