For nearly four years I’ve been hosting Airbnb guests at my cottage. Every once in a while some of them surprise me. Let me tell you what happened this week.

A lovely family came – mother, father, 12-year-old girl and 8-year-old boy. Unsurprisingly, the kids loved the chickens. The new coop set-up is proving to be perfect for getting in among the bantam hens. There’s enough room in the enclosure for both people and birds, the fencing on the sides and up above makes it feel airy and safe at the same time, and the chickens are silly enough and docile enough to invite attention. Most people haven’t spent much time with chickens. Give a girl and a boy permission to handle them (carefully) and they practically live in there with them. Here you see James and Juliana with a black copper maran and a silkie.

Naturally I spend a little time with my cottage guests when they first get here. We talk about chickens as they getting comfortable with what to do, how to hold them, what their habits are. Right now the hens are still young, still laying small, starter eggs. No one seems to know (I didn’t) that the first eggs that young hens lay are smaller than the ones they will lay for the next few years, and that the very first one or two are softer shelled. On this one you can see the darker colored part on the right where the shell is so soft it seems to have no calcium in it at all, and the slightly cracked part to its left where I barely touched it and the shell dented in. Juliana came to my door the first morning having gathered this very soft one,

this beautiful speckled one, 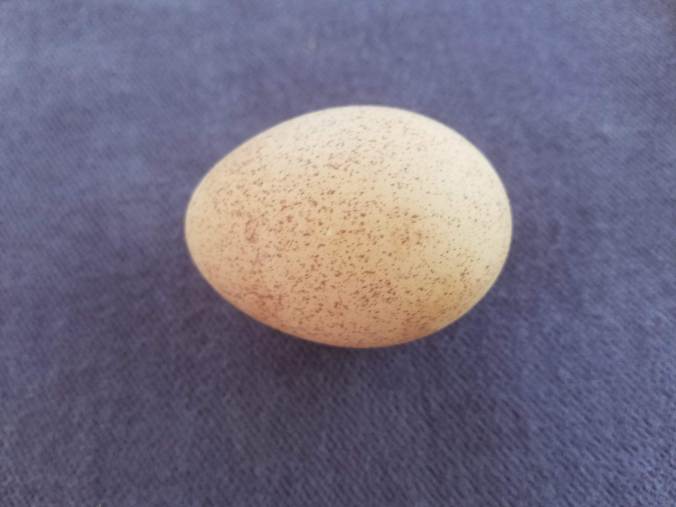 and six other small brown eggs that were neither speckled nor soft shelled. I’ve never had enough chickens for guests to collect so many eggs at once, nor ever had a child bring them to me in a basket. Her presentation made me smile, but what these children did the night before is what earns them a special place in my heart.

You may recall me saying at other times that the bantam hens are not to be commended for brilliance. When it rains, they stand there getting wet, soaking wet, when both a perfectly good coop and a perfectly good dry area underneath the coop await them. The last time it rained, most of them got so far as the platform just outside the wide-open, adequately sized, egg-shaped opening that would lead them to the dry interior. But still they stood in the rain getting wet. While this is baffling, it does make for amusing conversation.

James was fascinated not only with the chickens themselves but also with the vertically sliding door on a pulley system that (in theory) closes the hens in for the night once they have gone through that opening, which I will continue to think is not that hard and they will figure out is the thing to do. I am delighted in general to watch people, especially children, explore something new, to hear the excitement in their voices and to know that this experience is stretching them a bit and is possibly something they will not forget.

“When I was a kid,” James might say to his own son one day, “we went to a place where this lady [let’s hope he doesn’t say crazy lady!] had chickens. I had never held a chicken before, but they are really cool! They’re softer than I thought they’d be and some of them had fluffy heads and blue ears — think of it, blue ears! The first night we were there, my sister and I were sitting around the fire pit with my mom and dad roasting marshmallows. Julie and I wanted to put the chickens in their house for the night, so we went and did that and just as we were coming back to the fire, it started to rain. I remembered what the lady said about these chickens being too dumb to get out of the rain by themselves and I knew they would be dry that night anyway.”

What James and his sister didn’t know was that I was inside my house when I heard the rain starting. It was dark, maybe 930pm, and my windows were open, so I heard the heavy drops through the giant trees. I was comfortable on the couch, and tired after a long day, but those stupid chickens, I thought, they are out there getting wet! I’ve ignored this same situation other times, not wanting to get wet myself and justifying the obstinacy of the birds with various possible explanations including: they like the rain, they forget they have options to get out of it, they are not the first birds under the sun to get wet, etc.

But this time I wanted the chickens to have a dry night, so I got up and grabbed the flashlight and headed out to (get wet and) put the birds in. I knew the family had intended to make a campfire and wondered if they might still be out there, maybe even just getting their stuff in out of the rain. Sure enough, I heard voices and saw them vaguely through the raindrops. “Hi!” I called in their direction, remembering how much the kids liked the chickens earlier. “Wanna help me put the chickens in?”

“We already did that!” Juliana and James called back.

I was astounded. Not only did I not have to get wet, not have to fuss with wet and possibly uncooperative birds, not have to worry about them getting wetter. I could go back inside with my heart warmed up.

You never really know how your actions will affect another person. Juliana and James probably didn’t think they were doing anything extraordinary. They were just putting the chickens away because it was fun and they could. I mean how often do you get to put fluffy chickens in their house at night, close their door using a cool sliding mechanism and then walk back to a campfire? They didn’t know it was going to rain.

2 thoughts on “The Chickens Will Be Dry Tonight!”