Building a new chicken coop was, all by itself, quite an undertaking. You’ve had those projects too perhaps, the ones you think will take a weekend. Ha! This project started at the beginning of April when the chicks were one month old, still under the heat lamp in the basement, still cute. Three weeks later the new coop was skinned but not yet roofed, covered to protect it from the rain, and connected to the old coop only by the framework for the doors that would lead into each run. I had only the murkiest of thoughts as to what this area would look like in the end.

It’s hard to see in this photo, but if you look at the stoop of the old coop, you can see how the land slopes toward the left. That sloping would mean mud and yuck under the feet of the chickens in their run if rainwater continually washed in that direction. So I thought — and this is as far as I thought at this time, really, though perhaps those bricks might have chimed in, the ones holding down the black plastic around the fresh concrete securing those posts – How about let’s make a bricked area just outside the doors? That will allow for easier access when we have to get a wheelbarrow inside to clean up or get just ourselves inside to feed the silly birds. At that point I had no idea what was going to happen with the old stoop, and didn’t want to disturb it. The simplest thing seemed to be to dig out the area defined by the three posts with bricks around them (you can imagine the fourth corner).

This wasn’t as hard as digging the post holes for the run because 1. There were not as many roots here and 2. I didn’t have to go as deep.

There were ten 50-lb bags of cement sitting on the pallet in the woods behind the run, all that was left after we had filled all the post holes (we had mixed up 20 bags already). I have no idea why I figured that ten had to be enough, but I did, and it was. The last weekend of April I felt really tired, but the forecast for the coming week said we would finally have day after day of sunshine, so it made sense to push through and get it poured so it could set. 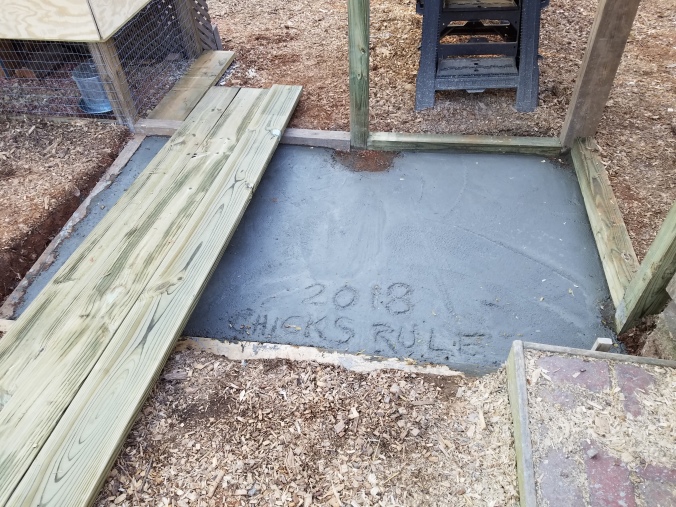 Chicks Rule indeed! (though no one else will ever see that). When I scratched that message in, I didn’t know I was getting sick, so this concrete pad was pretty much the last thing I did for a month except take a photo occasionally of the progress Sandy was making on the construction of the coop, which was great. I think I laid these bricks in, just to see how well they fit. But I am not sure.

How fun it was when Brad, Beth and little Piper came for a visit!

All chicks were outside by now. In the photo above you can see that the ones getting huge were confined to the old coop, and in the photo below you can sort of see the smaller ones confined to underneath the new coop. At least they were out of the basement! The predator who unsuccessfully tried to dig under the fence to get to them made me get a little overprotective (just a little) and ask Sandy to put those boards and cinder blocks in its way, should it decide to try again. (Let it just try!)

May was a beautiful month all in all, and Sandy moved right along, first by checking the fit of the metal roof panels…

… then by skinning the roof….

(In the photo below it’s a little clearer how the land slopes. See the difference in elevation between the top of the old coop’s stoop and the concrete pad below? It’s a drop of about 14″. The wheels in my mind were turning every time I looked at that slope: It’s going to be a muddy, mulchy mess every time it rains.)

…then by papering the roof (which I’m sure is not how you say it).

Then Sandy got the new red panels on (matching the old coop – thankfully they had the same color still available after seven years). I vaguely remember standing next to the concrete pad, holding the first one in place on that side while he stood on a ladder and screwed it in. Once the first one is in, the others are easy because the panels have grooves that fit, one on top of the one before. “Easy” is a relative term.

That’s Coco under the brooding boxes with chicks behind her. All you had to say to her, even while she slept soundly (which she did, quite often, next to me on the couch), was Wanna go see the chicks? And she hopped to!

But see how muddy and yucky it looks there after it rained?

It’s fascinating to me how things evolve. As it turned out I was quite sick during the month of May. I didn’t drive for at least two weeks and spent a lot of time indoors resting. But I would wander out there sometimes, looking at that slope, looking at that mud, thinking This is not okay, something has to be done here. There was no thought of a viewing area, I assure you, just thoughts of slope, mud and a way to get a wheelbarrow in there.

One sunny day Sandy put a camp chair out there for me so I could sit and watch at least, and then when Bradley came they brought that bench from the garden. Chicks were still underneath because the fencing of the runs was not yet finished, but progress is evident: ridge cap, doors, brooding box shingles, etc. 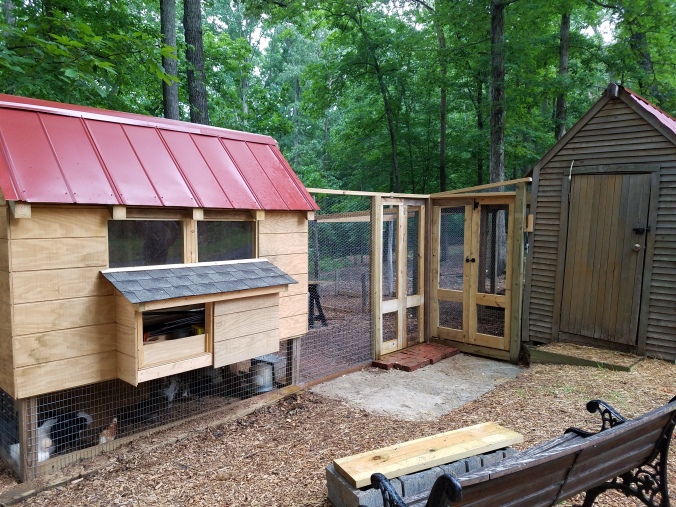 I sat on the bench. It was nice to watch the chicks, nice to be where the coop-building action was. I sat there a lot, too sick to help, though thankfully this was before the flying, biting insects came out in full force.

Without planning it that way, I had myself a bona fide viewing area. A viewing area is a good idea for me, for my Airbnb cottage guests, for friends, for family who come to visit….