People often don’t know how they touch the world, what kind of mark they make that others notice and perhaps admire or emulate. My friend Kim’s dad was a make-do sort of man. I admired him greatly for many other reasons before I knew this about him, and when Kim reminded me not long ago that he would always find a way to use what he already had, which I do myself whenever I can, I felt proud to share a good trait with a great man.

The first time I realized I was being like Bertie in this way was when I was making war with weeds this spring. Well, maybe not war, but as much as possible, I was determined not to let them get the upper hand this year, especially in the paths between the raised beds in the vegetable garden. I have piles of mulch right now from when two big trees were taken down in the winter. It’s just sitting there, asking to be useful. Asking in its own way.

That empty middle section was as big and deep as the piles on either side of it.

Before I made (many) trips back and forth from the pile to the garden, wheelbarrow after wheelbarrow full of mulch, I put down some very expensive landscape fabric (that had been kindly given to me) as a barrier between the dirt and the mulch. Weeds would pop through in no time if I didn’t. (Note what happened in the planter box of yesterday’s post – oh, that’s what I can do! I’ll make a barrier against the aliens!)

This was a good plan until that roll of very expensive landscape fabric ran out and I was in the middle of the job and rather grubby and quite unwilling to go to the store, even if I was willing to spend the money, which, despite my understanding of the need for such a thing, at that moment I wasn’t.

Barrier, I need a barrier.

You know that little birdie that sits on your shoulder sometimes and whispers good advice in your ear? (And you either listen or don’t, depending on the day’s measure of good sense vs. stubbornness?) Well suddenly the little birdie was Bertie, and I heard, “All those old cotton sheets you have in the basement, those old towels… they would serve….”

Indeed they are as good a barrier as anything. Water can get through them but weeds can’t, they will break down just the same over time and didn’t cost anything, and I didn’t have to go anywhere to get them except the basement! (And now I have a solution to the alien invasion besides!)

You’d never know it, but the part right between the bench and the bed with the lemon grass behind it has old sheets and towels under the mulch 😊 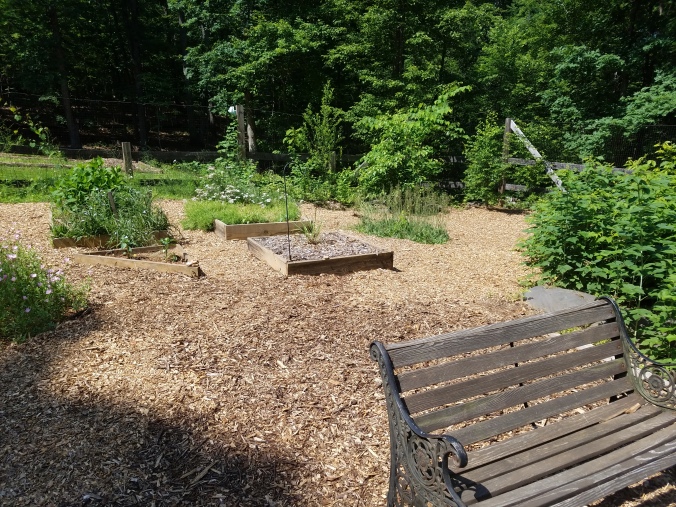 Some weeks later I decided that the two chicken coops needed a deck between them. You might have seen previously how this looked as a finished project (finished except for the siding on the new coop, which I am still waiting for): 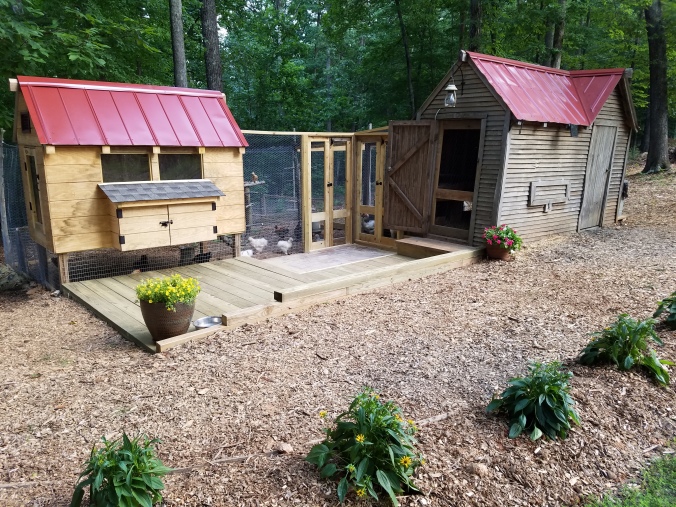 In the next few posts, as I go through the steps it took to get to this pretty picture, I’ll show what’s under those nice deck boards, and you will see that Bertie was whispering in my ear once again.