I woke to the sound of a rain that made me think about the windows being open in the living room, and … uh-oh, might the wood floor be a puddle? It was the kind of a rain that resembles the sound of a feisty wind going through the leaves. I listened – if saying I listened both carefully and drowsily makes any sense – and couldn’t quite tell. Is that rain or is that wind?

Concern for the floor got me up. Dry. Good. Rain poured straight down, not in, not a lick of breeze. She wasn’t going to like this. The dog, I mean. This dog. This is her happy pug face on a sunny day, her cushy spot — not that anyone here brought that towel outside for her to have a soft bed to lay on during the construction of the coop…

This dog hates the rain, and it was raining hard. At a quarter to 6am it was light enough for me to see whether or not she was doing the thing(s) she must go out to do before she gets her breakfast every day. First order of business she managed quickly.  You might think she would know by now, going on nine years old, that people can count, and we all know that one order of business does not make two. She thinks — every time it rains, every time we go through this routine — that she can scoot to the front door after half of the business is done, and we will let her back in. During the less-than-five minutes that we stood in the rain today, she got totally soaked, and predictably scooted, but this did not fool me any more than it has in the past. I picked her up and tossed her in the grass admonishingly. I wonder if she says to herself: One of these days, if I just keep trying, I might get away with that!

Coco finally complied, though not nearly as quickly as you would think – why can’t dogs just squat and go and be done with it? Why do they sniff and search and reject perfectly good spot after perfectly good spot? Surely she then thought (if she thinks, and that’s a leap) that this early morning torture was over, but no. I played her game now, the delay-for-no-apparent-reason game.

I meandered on the driveway (wet through already, what did it matter?). Wait, I can imagine her saying. That’s not the way this works. I do my thing(s) and we go back in. It’s raining!!!

Actually I wanted to check out the berm.

My property slopes gently toward the woods on the southeastern side. Having spent a great deal of time on the chicken coop construction site over the last few months, we could see the tendency of heavy rainwater to come down the driveway and wash through the mulch I had laboriously spread on the upside of the site. This was not okay. Water will flow downhill, yes, but it might submit to some redirecting. Thus we had constructed the berm along the driveway… 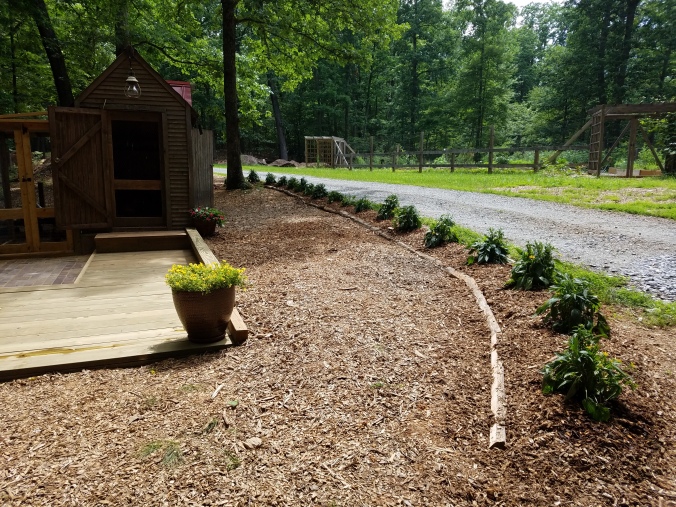 …and ornamented it with 18 Rudbeckia plants last week. The long, low mound of a berm, we hoped, would be just high enough to keep the water on the driveway side. Once past the coop area, it could find its own path to the woods.

Sure enough! Not only did the water not wash over the coop area, it made itself a lovely winding path toward the woods, helped ever so slightly by me, raking the edges in the pouring rain. How perfect that this little volunteer stream found its own unboring path! 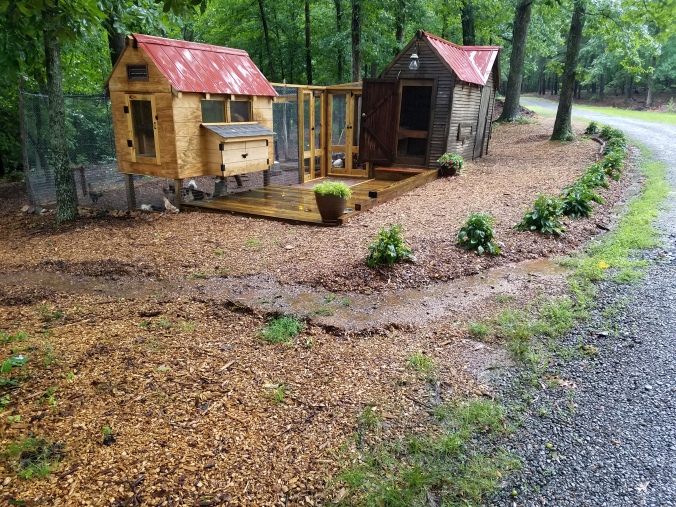 In my dreams the area through which this little stream flows is a woodland garden. The stream bed is carved out a bit more intentionally (by me, when the urge to play with dirt strikes again) and lined with stones that are big enough to stay in place but small enough to walk on when it’s not raining. Maybe there’s a little footbridge. All around there are various perennials that of course the deer will leave alone, and which will bring color and interest throughout the growing season. My friend Louisa said she has some shady plants, some kind of pachysandra she has too much of and is willing to share, and there’s mountain pink and foxglove and primrose and other abundant growth I can move from the raised beds in the other garden. We’ll see…

You have doubtlessly noticed the ridiculous birds in the above photo. Until now, as far as I know, they have not ventured into their primo home on their own. There, in the early morning pouring rain, I had found them huddled under the coop, wet and bedraggled, having obviously wandered out from under the shelter throughout the night. (Apparently we got five inches of rain last night, and it’s not done yet.)

By the time it was light enough for this photo, some had left the shelter and the huddle, but still not made their way up their designer ladder. Is this chicken playing the sympathy card or am I misreading her face? (The top of her head is supposed to be fluffy!) 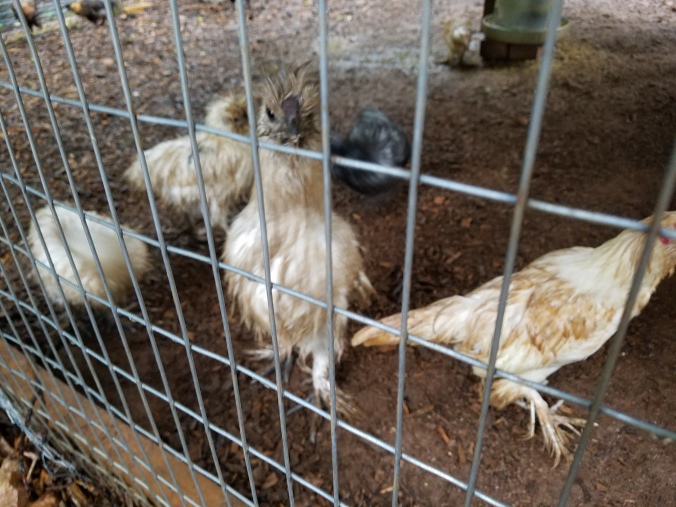 I thought maybe they needed a little encouragement, so I tried catching some of them to put them in the dry space. I managed four, then gave up. Let these four, clearly too slow or not clever enough to evade me, be an example to the others. That’s wishful thinking of course – an hour or so later three remained in the dry, no others had followed suit, and one had hopped back out into the wet. At least I got the first photo of the view through the front window:

Chicken on roosting pole inside! That’s the idea! The two others are trying to figure out what they are walking on and maybe sending secret signals to their compatriots that this is a whole different surface than wet mulch under the feet and must be carefully considered. 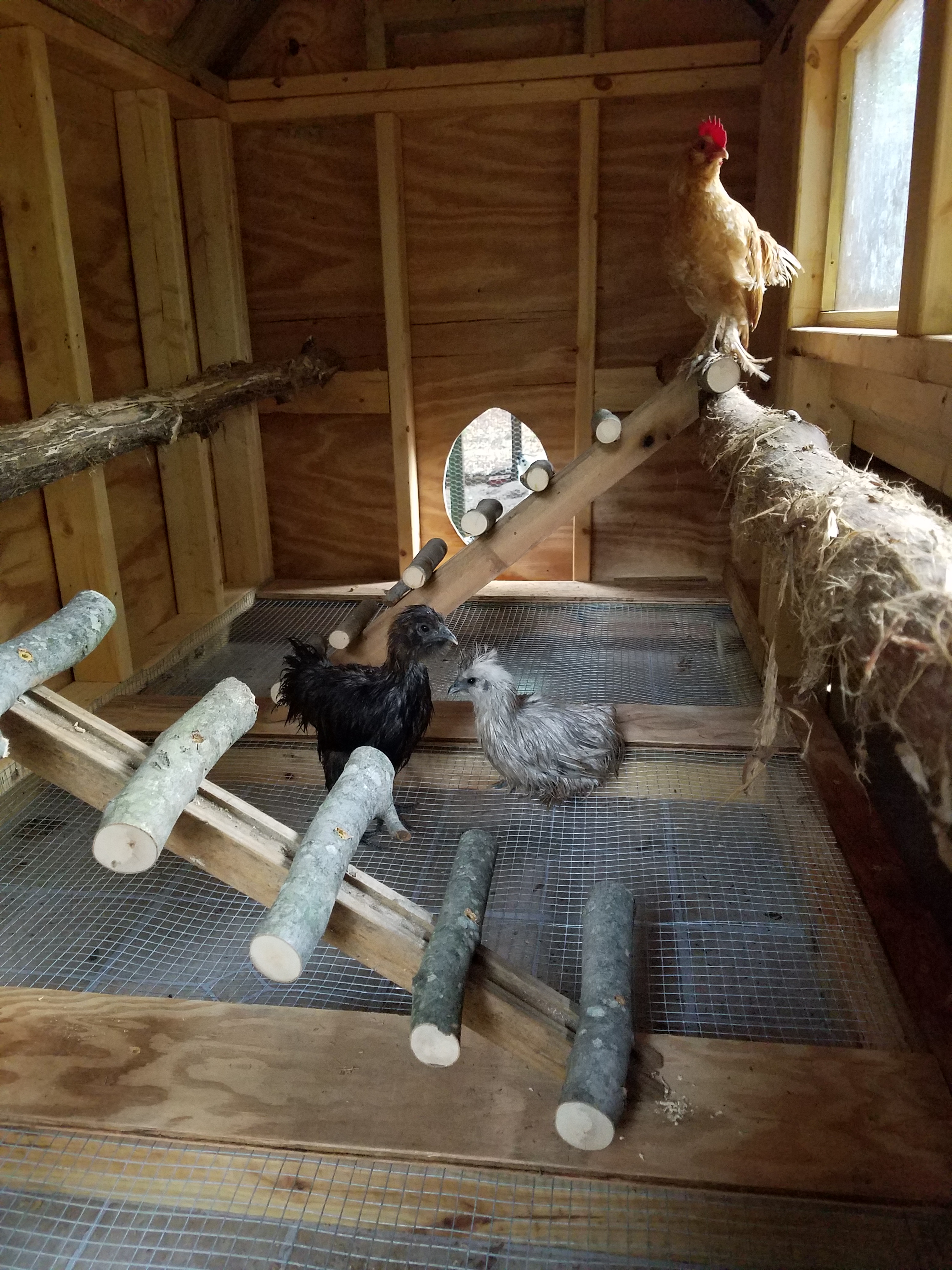 The bottom line today is that these birds get no credit for brains. After all this work, if they don’t like their house, if they can’t figure out how to climb up the stairs and go through the door in the rain… All right, we figured out how to get the water to go where we wanted it to. Maybe there’s hope for chickens?

In the meantime, Coco found a blanket to snuggle into. She is no doubt dreaming of sunshine. 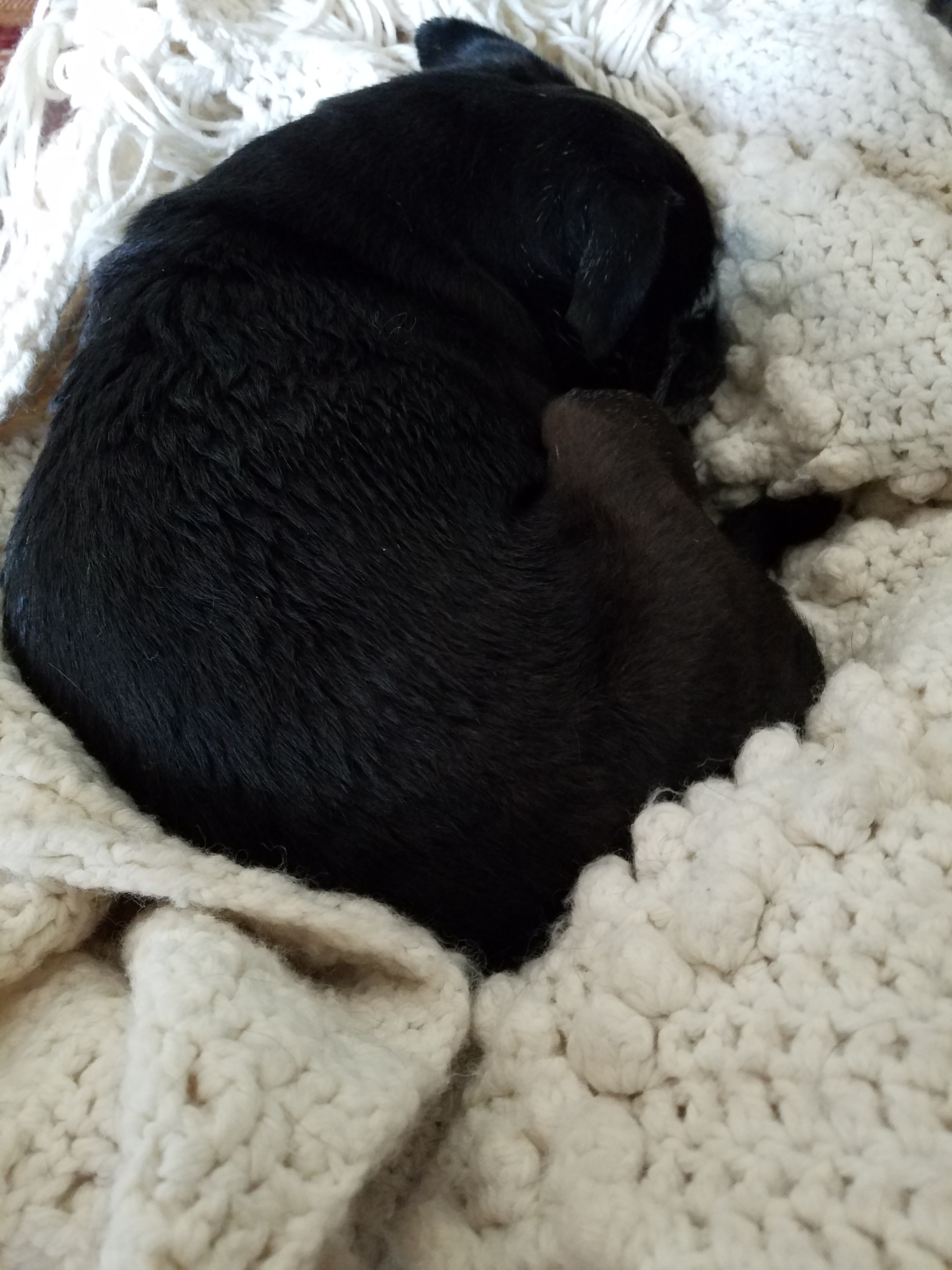