Last year in early September I was attacked. Normally you wouldn’t think it a problem to stroll along a lovely river on a dirt path. Early mornings in Virginia in the late summer can be scrumptiously warm, so I was wearing a dress. Bad idea. My co-stroller was wearing pants. Way better idea. Those river mosquitoes attacked me with a vengeance, as if there had been a famine and then suddenly fresh meat, free for the taking, came to town. I realized my folly when I got home and decided to count the bites on my legs. I stopped at 30, too depressed to count the rest. Eventually they healed – supreme efforts to leave them alone and supreme weakness resulting in ferocious scratching notwithstanding. By Christmastime they had finally all healed.

Something about the mosquitoes in Virginia is different than the mosquitoes in Vermont, where I lived for 20+ years. Something about the biting kind of insects in general is different. Before moving here 15 years ago, I never had these severe reactions. My first spider bite here took ten months to heal. My first tick bite, four months. It’s a bother. Can I call it Virginia Venom?

After hearing the story of the river walk, my friend Crissie sent me a new shirt. She lives in Caribou, Maine, which is way, way up there. They have black flies, nasty black flies, tiny and annoying and biting black flies. Seems there’s a shirt for that. Small world that I live in, I had had no idea no idea that “repellent apparel” was a thing. But it is. LLBean, based in Maine for over a hundred years, makes the shirt she sent me. It’s so soft, you would never know it had been treated with an active ingredient called “permethrin.” Learn something new every day!

The shirt got me thinking about menaces. Powerful insects (the ones that have power to make my skin miserable for a time) are a menace. Granted, mosquitoes and black flies are not as much of a menace, nor are they as powerful or invisible a menace as the novel coronavirus we all are scrambling to understand and defend ourselves against. If only there was a shirt we could wear instead of these masks!

But there’s always something, right? Always a menace of some kind. In Vermont I didn’t deal with nasty bugs or the blazing hot and humid days that are common during a Virginia summer. But I did deal with blizzards in March and sometimes, snowfalls in May.  On Saturday, May 9, three days ago, it looked like this in Jeffersonville, Vermont. 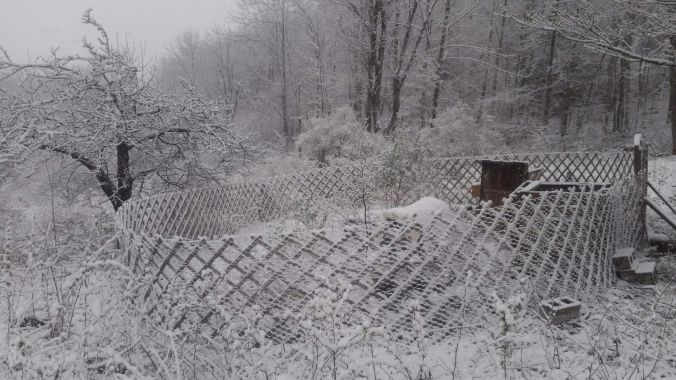 Last year we didn’t have a coronavirus to change our world. It has made me feel super nostalgic lately. I found an old Michael J. Fox movie (For Love or Money) made in 1993. You could have parades in 1993 (or squash festivals in fictitious towns, as the case may be). The average car cost $12,750. A movie ticket cost just over $4. The Pentium microprocessor was introduced by Intel. Canada got its first female prime minister. We could let our children play outside without worrying. I myself was confidently going about my own business, unaware of a menace yet to intrude in my family. But menaces there were. In 1993 an earthquake in India killed nearly 10,000 people. A dilapidated and overcrowded ferry sank in Haiti and as many as 1500 died. The World Health Organization estimated that 14 million people worldwide were infected with AIDS. The WACO disaster happened. Menaces of every ilk sneak into the world with little or no warning.

A quick glance through a history book reveals invasions, disasters, wars, heartache, pain, suffering. A teeny sampling: In 1700 B.C. the Hittites invaded Syria. In 111 B.C. war broke out between Rome and Numidia. In 79 A.D. Mount Vesuvius erupted and buried the town of Pompeii. In 793 Viking raiders attacked in Northumbria. In 1247 Mongols invaded Japan. In 1348 the Black Death ravaged Europe, killing at least a third of the population. In 1502 the first Africans were taken to become slaves in America. In 1666 the Great Fire of London destroyed more than 13,000 homes. In 1729, opium had become such a problem that the Chinese Emperor Yung Cheng banned it. In 1737 an earthquake in Calcutta killed 300,000 people. In 1918 a worldwide influenza pandemic began, killing tens of millions.

Maybe menaces are where the rubber meets the road. Maybe (assuming we survive) they are where we find out what we are made of, where faith grows stronger and we discover or re-discover with more certainty what’s important to us and what’s not.

I’m reading a book about Winston Churchill*. In it the author recounts a letter Churchill wrote to his stockbroker in 1932 when the United States was solidly in the Depression. “I do not think America is going to smash…. If the whole world except the United States sank under the ocean, that community could get its living. They carved it out of the prairies and the forest.” I appreciate that he thought so highly of Americans, but I think he undersold the rest of the world. I do not mean to diminish the tragedy of coronavirus’s impact on many people’s lives, nor the terrible sadness if you know someone who has suffered and died from it. But I admire the dogged determination of humans everywhere to keep going despite the menaces that come along – no matter how harrowing or unpredicted or invisible or dangerous the Menace of the Day may be. We have been on the brink of “the world will never be the same” before. And the world did change. Mightily. But here we are, still chugging along, still finding ways to be good neighbors, still swapping stories, still staring at the stars at night, still loving our families and friends, still caring. May this never change.

11 thoughts on “Always a Menace”