A couple weeks ago I realized that the shoes I have been using for bricklaying and porchbuilding and gardening had serious cracks in the soles. The kind of cracks Nora Jones sings about in Creepin’ In.

Go ahead and click on the link – her music, her voice (and Dolly Parton’s in this collaboration) are way better than the words alone.

What do you do when your shoes have holes in them? I’m a make-do person, and I would fix them / deal with them if I could, but the fact is that these slip-ons really weren’t that supportive anyway – kind of loose around the ankles they were – and had considerable wear on the inside too so maybe it was time to retire them.

And I had this other old pair in the closet that I probably got for hiking (long before the days of who-would-have-thought-it bricklaying), a pair with decent (read uncracked) soles, strong laces, metal lace-holders (that surely have a name in shoe-talk) and only a little bit of the stitching coming apart. See? 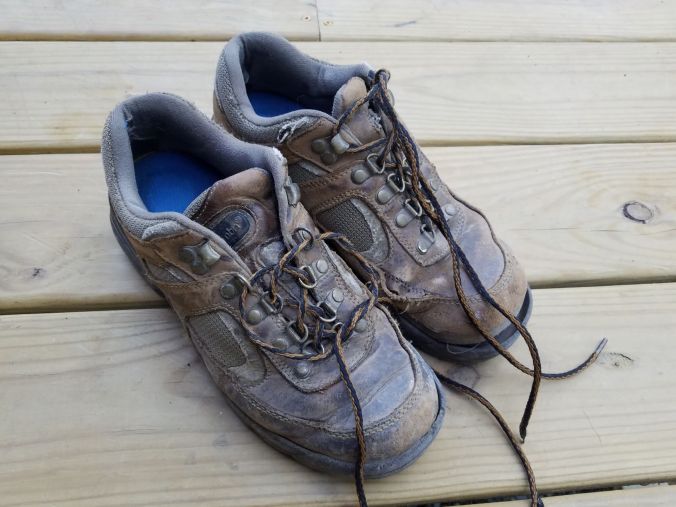 Faithful, sturdy shoes, these, reminding me so much of the goblin’s shoes in the Little Bear books.

One day a little goblin went by an old cave. It was old, it was cold, it was dark. And something inside it went bump. What was that? BUMP! “Hoo-ooh—” cried the goblin. He got so scared he jumped right out of his shoes. Then he began to run…. (The goblin ran and ran, very scared – first about the bump, then about the pit – pat – pit – pat chasing after him.) 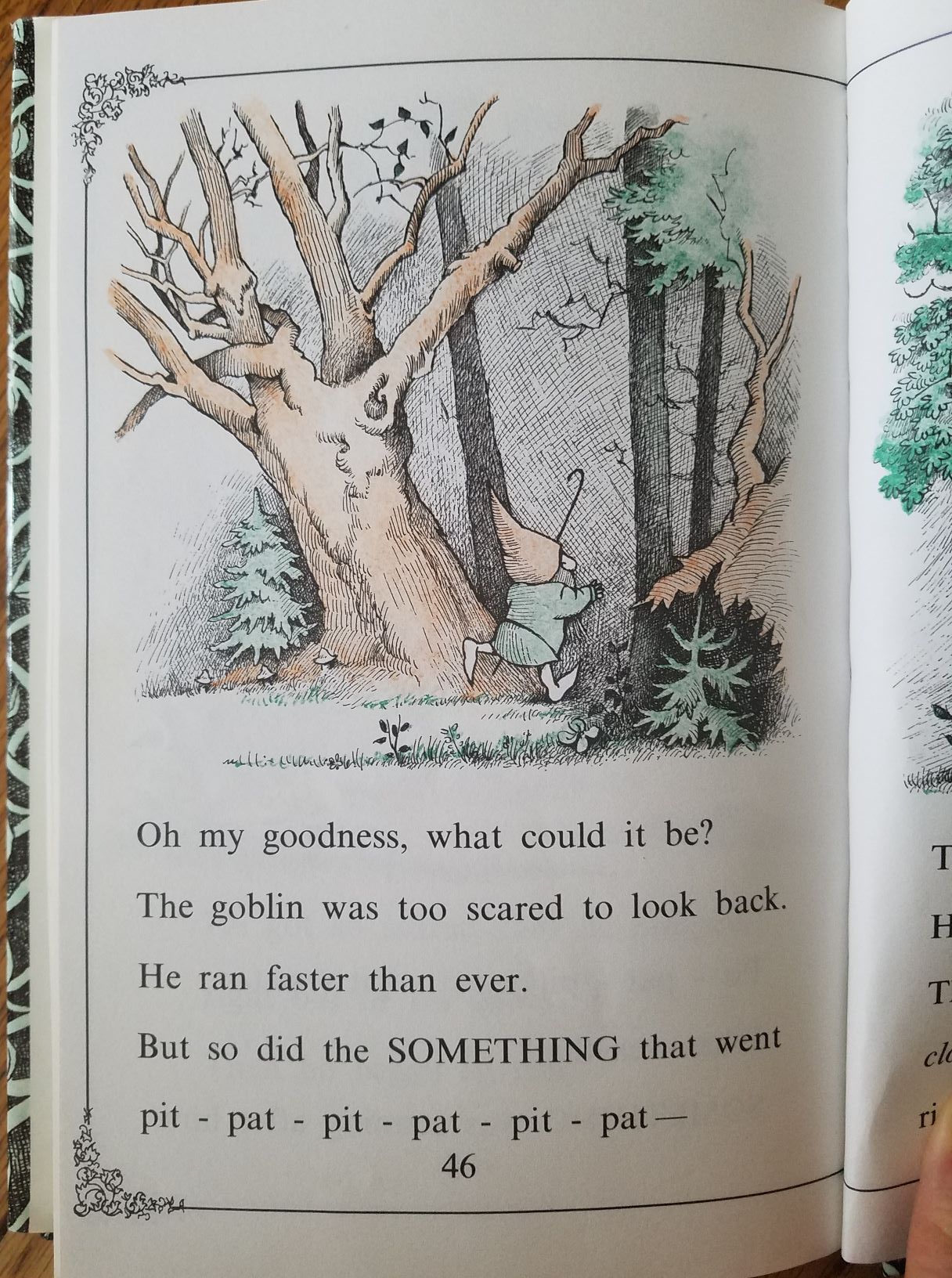 …the pit – pat – pit – pat came closer, closer – CLOSER – till it stopped right by the hole in the tree!

Then all was quiet. Nothing happened. Nothing. The little goblin wanted to peek out. It was so quiet. Should he peek out? Yes, he would. He WOULD peek out. And he did. “Eeeeeh—!” cried the goblin. Do you know what he saw?

He saw – HIS SHOES! His own little shoes – and nothing more. “Goodness,” said the goblin, hopping out of the tree. “That old bump in the cave made me jump right out of my shoes. But they came running after me, didn’t they! And here they are!” 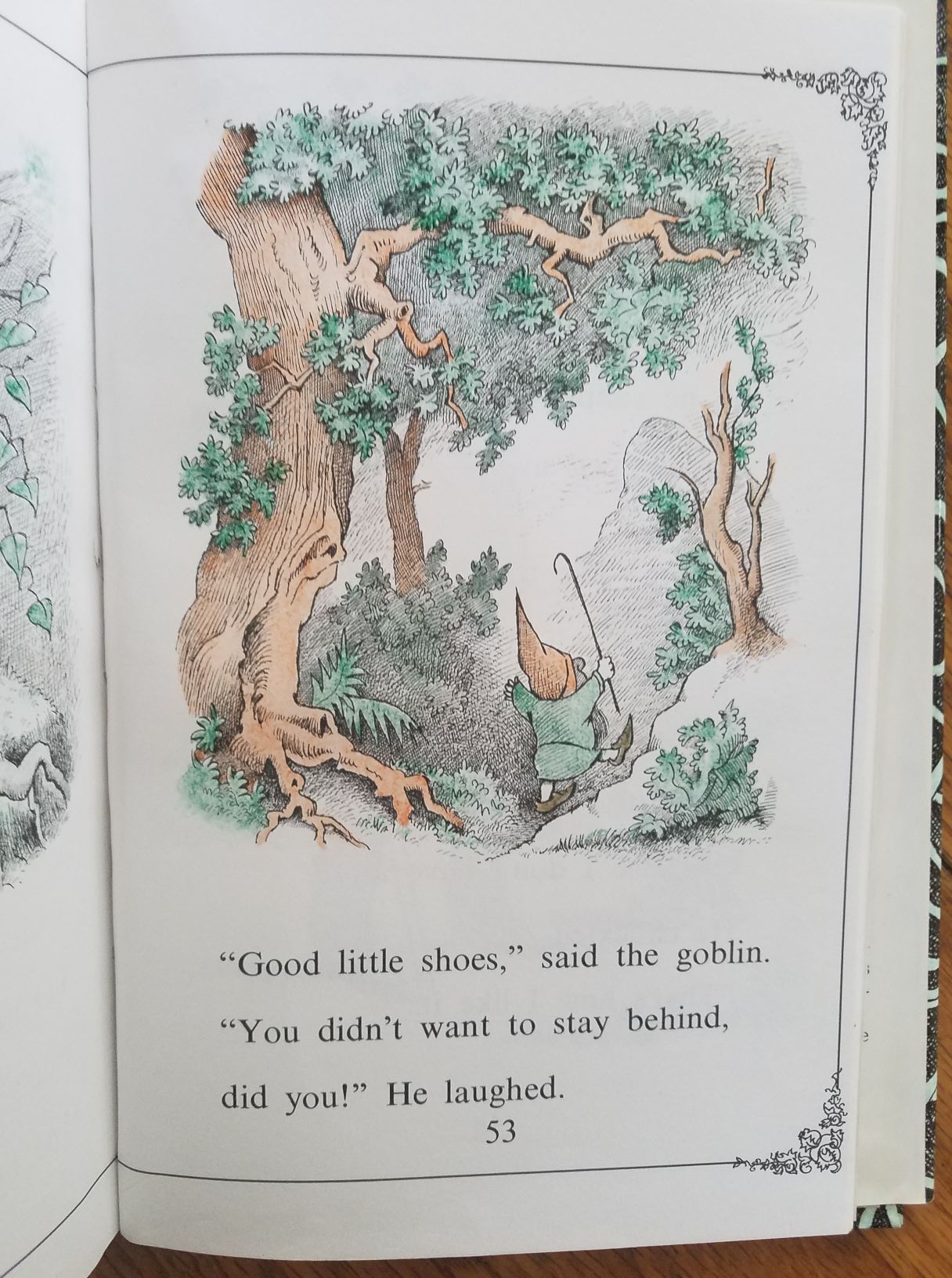 Good little shoes! As were mine.

Or so I thought. Proudly (I was smart enough to hang onto these perfectly good shoes for such a day as this when they would come in handy!) I began wearing the good old shoes. Their value suddenly came into question while I was shoveling gravel to fill in empty spaces to make this firepit platform level (things you will walk on should be reasonably level) with the 709 free bricks that came my way (thank you, Joe!). See all that gravel filling in where the ground slopes downward? One shovelful at a time, baby! We call this I-get-to-have-ice-cream-later!

So, yeah, gravel does not feel good when it gets IN your shoes. Understand, the gravel was not, as in the case Nora Jones’ Old Shoe, creepin’ in the way water got through her sole. Oh no. It was not, as in my First Retired Pair, dropping in around the loose ankle part (the sole cracks being big enough for water but not for gravel). It was having a high-old-easy-time-of-it coming in where the sole separated from the rest in a way it is not supposed to. See, your toes are not intended to be ever visible once your foot is in the shoe. In case you were wondering. 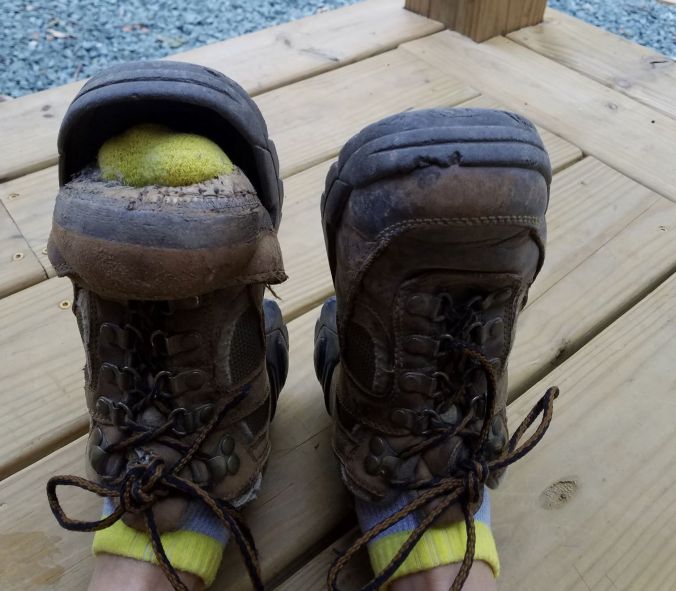 You think maybe I could fix this with glue?

Okay, I do know better than that. Last year Samuel got Red Wings and is convinced they are the best, especially their once-a-month-we’ll-take-care-of-your-shoes plan, and he’d been asking me what I wanted for my birthday, so off we went. New, wonderful, shoes – voila! 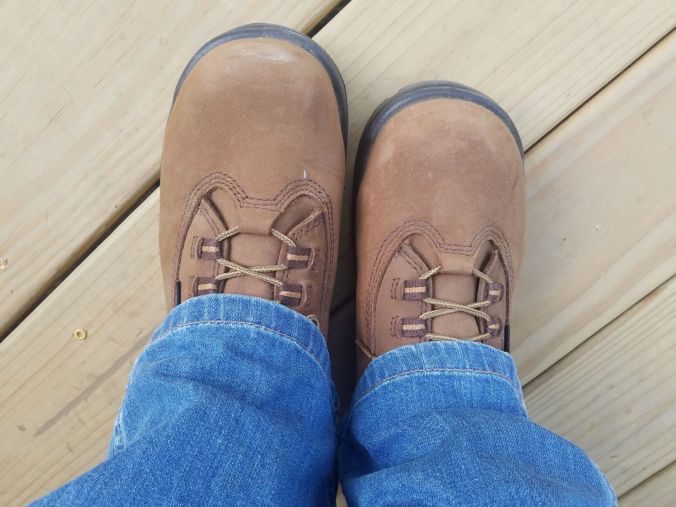 But it got me to thinking about what we keep and what we throw away. I’m not a person who easily throws stuff away, not do I hoard, nor do I misunderstand that things have a given span-of-presence in our lives.

Why do we keep some things and throw other things away? By things I mean not only things in the inanimate sense – shoes, old windows, Christmas trees in early January, mugs, cars, underwear, mail, cookbooks, screwdrivers, couches – the list is long!! I also mean people. Not in the sense that we throw people away of course, but that the circle of people who touch our lives changes over time. Some come closer, some fade, some appear occasionally, some reappear after long periods of time.

It’s hard to know who and what to hold onto! I wish I had Kenny Rogers’ confidence. Do you think he was talking only about the cards in your hand during a poker game?

Seems to me, some things are useful and some are relational. And that applies to both things and people. We only sometimes feel a pang about leaving people behind when we change jobs, but anyone who is remotely a friend (or very much a friend) is in another category and we ought not be so flippant. That teapot with the hairline crack might be on its last legs, but I got it while shopping with Claudia in Germany; its usefulness is only part of the reason I use it every day. Old shoes that eat gravel should go in the trash – their function is past – but small cracks in the soles of the other pair, well, maybe I can use those for painting?

Some things are easier to get rid of than others. There are no hard and fast rules or guidelines about what or who to keep around and what or who to part ways with. I think the key word in the song is you, as in you got to know…you never count…

If I may elaborate:

You look for clues, you seek confirmation, you follow your heart, you make your best judgment (you got a great new pair of shoes!). Sometimes you are wrong, you misjudge, misinterpret clues, have to re-assess, start again. Sometimes you are 100% correct and your timing is perfect.

Sometimes I wish the answers were clearer! But then we’d be like robots, right? See A, do B, expect C, repeat with other As, Bs and Cs.

Now that wouldn’t be any fun! Part of the journey is not knowing what’s around the next bend, like an ongoing movie that we don’t see the ending to until we get there. Do you ever feel like you’re in the middle of a movie? I do! And I love it because I get to play my part, small as that is, connected to these particular people as it is, focused on this goal or struggling with that challenge as it is. I never want to forget how wonderful it is to have what I have, even if it’s different from what other people have, even if there are things I don’t have and wish I did.

A Very Happy Labor Day to Everyone!

7 thoughts on “What We Keep and What We Throw Away”