When Claudia visited in 2016, her first trip to the states in a few decades, we were acutely aware of how rare and precious our time together was. You know how it is – time flies with dear friends. You want to do everything you’ve been talking about for so long: Let’s make that no-knead bread and the homemade mozzarella cheese and a salad so you can dress it the way I love, oh and let me show you how we make our pizza now. Let’s watch Downton Abbey and Witness and The Lives of Others – and have you seen The IT Crowd? (Both stupid and hilarious, for when we just want to laugh!) Monticello is nearby, and Yoder’s, and the downtown pedestrian mall that’s so much like Burlington’s, and don’t forget Barboursville Vineyards with its cool stone ruins of Governor Barbour’s mansion. Let’s take walks in the morning when it’s brisk and in the daytime when the sun is warm and in the evening when the sun glows in the western sky – oh, yes, and Humpback Rocks is a great hike, best in the evening (not like Tirol, okay, but for Virginia, a great hike!). 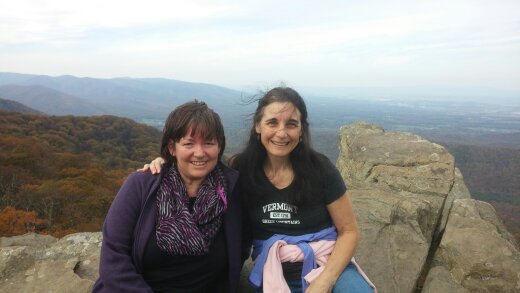 We had only nine days. And when I had asked her ahead of time what she wanted to do when she came, she replied with one word: “Rest.”

So let’s, instead, be real. Life comes down to choices, right? As I lamented, she comforted: Zu viel nimmt weg von genug, which I wrote down on a post-it, duly translated and left stuck on the side of my fridge.

Too much takes away from enough.

You could play with the translation and say Too much is worse than enough or Too much negates enough. The idea made sense – if we try to do too much, the time will not be restful, we’ll make ourselves crazy, we’ll miss the balance. And the German had a nice cadence to it. But the verbatim translation didn’t quite work for me. It stuck in my mouth somehow. And it never occurred to me to flip it around and put “enough” at the beginning.

This past week I got help from Mary Poppins. As I watched my five-year-old great niece giggling her way through this classic, I stumbled on a translation of Zu viel nimmt weg von genug that I’d missed the last, oh, say, five times I watched this movie. After the bit of nursery magic when all the toys and clothes dance and bounce and jump around, finding their way into drawers and cabinets and closets, converting the room from messy to tidy in a few delightful minutes, Jane and Michael wanted to do it again. More magic! More fun! How can that be bad? Mary Poppins drew the line in her practically-perfect, matter-of-fact way: “Enough is as good as a feast.” Click on the link to watch her say it.

Well, look at that! In 1910, the setting for this film, they too were struggling with When is enough? Where is the line? Clearly this is not a new problem. Well before that, people in biblical times were likewise advised about moderation. Have you found honey? Eat only what you need…. (Proverbs 25:16)

The idea of potential excess, should-I-or-shouldn’t-I-cross-that-line, comes up all the time.

What fills a day (or nine days)? Activity, yes, but how much is enough to be fun and satisfying yet avoid utter exhaustion?

What fills a house? Stuff, but how much is enough to fend off clutter and inundation?

What fills our bellies? Food and drink, but how much is enough for good health? How much crosses the line?

Decisions. Every day I have to make hard decisions – not every day as in on a daily basis, no, I mean continually    throughout    every    day – what to say yes to, what to spend money on, what to put in my mouth. Abundance has a downside, some would say a curse.

Funny, we don’t have trouble deciding how long to stand there rubbing our hands together with the soap before we decide they are clean enough. We know when’s enough. We’re pretty good about knowing how fast to drive (we value our lives), how much physical space should exist between us and the person standing next to us (how close would be too close), how many toppings we want to put on our pizza (how many would be too many), when we’ve been sitting too long (need to move!), when enough time has passed since we last heard from an old friend (time to send a message). How come that same mostly-good judgment can’t apply so nonchalantly and easily to (pick a temptation, any temptation) shall we say ice cream?!

While standing in line to get ice cream recently, the person next to me ordered a small but said out loud while staring at the price list that looked something like this, 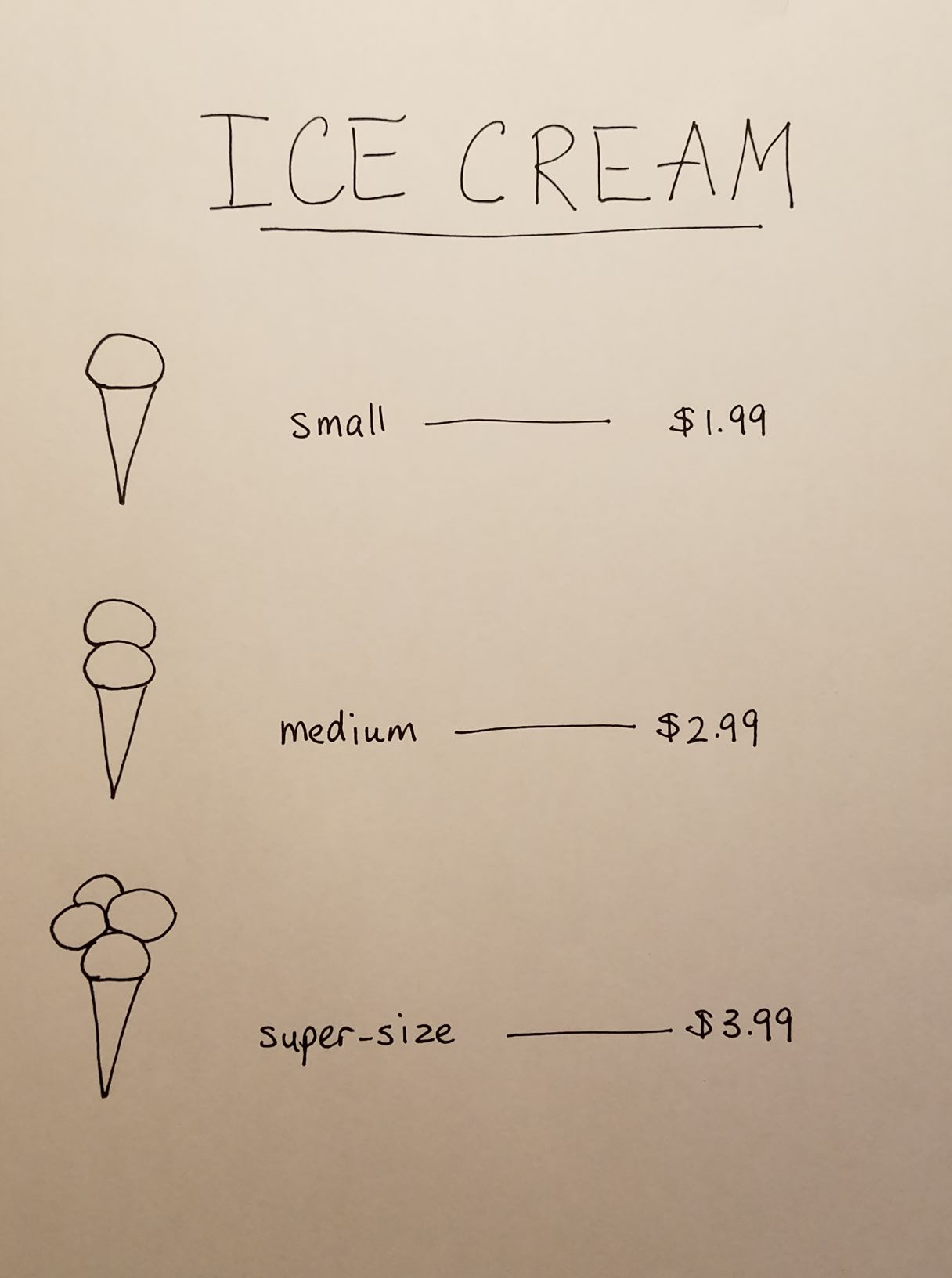 “I want the super-size.”

Aren’t people the same no matter what year it is!?

A friend who was watching her weight once told me that a small scoop of ice cream didn’t taste better than a large bowlful, and that when she had less, she savored it more – or at least she was trying to train herself to think this way!

Maybe training is the answer. We can train ourselves (or be trained) to do new tasks at work. We adapt to new surroundings or circumstances with a bit of self-talk. It’s an idea.

Hmmm, but I like a feast as well as anyone. (We have only nine days! … That bread is fresh now! … I really like that bowl/table/shirt/game/book/gadget!)

How about mental gymnastics? Maybe I could reconfigure the feast, spread it out over time a bit or have one a little less often?

I hear once again my wise professor’s words. The topic at the time was bacon: Should I eat it? Shouldn’t I? How much? He calmly said three words: Balance. Variety, Moderation. Is it really that simple? Maybe.