I started going to a gym recently. My mother was confused. You need a gym now besides everything else you do?? Good heavens, girl!

I have never been a gym person, was always more active in the hauling-brush-to-make-a-burn-pile kind of way. I can’t tell you what the gym machines are called, how they work, what you are supposed to do with them or why they are useful – other than the obvious: they make you stronger somehow. To demonstrate my cluelessness, I will tell you that at the gym there’s a thing you sit in that has a flat part you push up with your legs, but before you do that, you load the flat part up with weights that are round and flat and have a hole in the middle (like big and heavy smooshed flat donuts) and fit on a metal bar behind the flat part, which makes it harder to push, thereby theoretically challenging you more and making you stronger if indeed you can repetitively push the flat part up. When I got home I told Samuel they put one disc on there for me – one, and he tells me one weighs 45 pounds (the guy after me put six for himself). Plates, Mom, they are called plates. Oh.

Why am I doing this now? Samuel’s gentle persistence paid off. He has been telling me in various ways, numerous times, for over a year now: It’s important to stay strong, Mom. He reminded me of my college writing prof Peter Sandman who always said that if you have a good point to make, tell it to your audience three times in three different ways – maybe one of the ways will stick! Samuel convinced me that working with someone who knows (considerably more) about strength and fitness (than I do) would be smart. One could also ask: Why do we have to get weak before we start saying, Yeah, maybe I need to be strong…

The Gym in Charlottesville not a foo-foo gym. It’s a serious-about-getting-strong gym, and I love it for a lot of reasons. Did I just say I love a gym? Yes, I just said I love a gym. Wait, who said that??

1. The owner, soft-spoken, rock-of-a-human Justin Tooley, says plainly that getting strong isn’t just about your body, it’s about your life and about everything in your life. Being strong in life is important – I know that. Un-strong people get blown around. I love that he’s telling people why being strong is important and he’s practicing what he preaches. 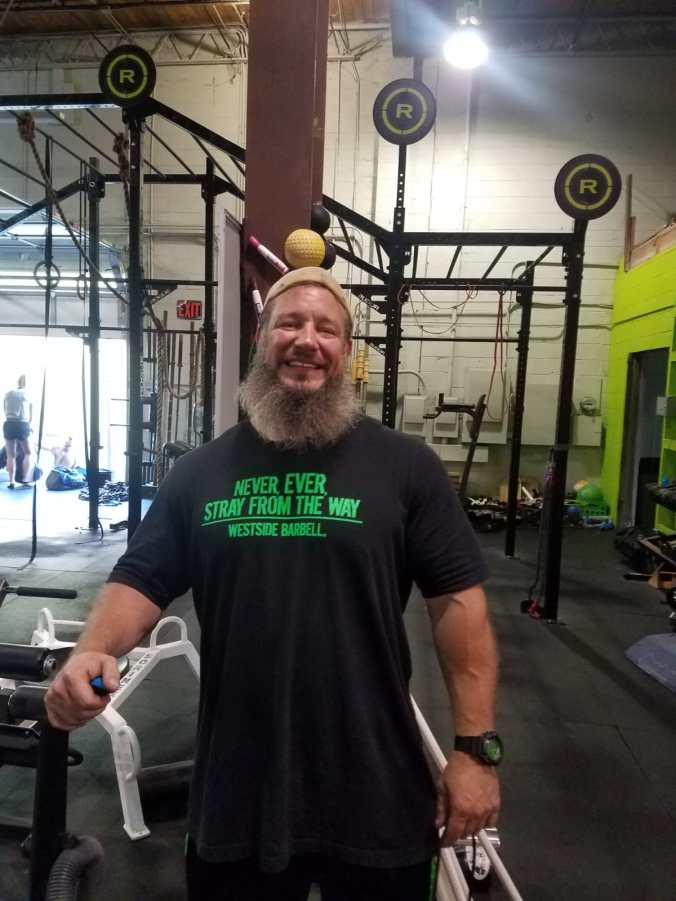 2. It doesn’t matter what you wear. I wear a comfy pair of pants that Samuel calls my “inside-out pants” because the flat-felled seams are visible and the drawstring is on the outside (how outlandish is that!? who puts the drawstring on the outside – he is very hung up on that). But nobody cares what you wear. It’s not about what you wear. It’s about getting strong. I showed up the first day wearing jeans, a sleeveless top and flip-flops, thinking I’d just watch, and Toni, best first impression you could ever imagine, was unfazed. She’s so terrific, included me so beautifully and left it up to me whether to do the run-with-kicking-your-heels-up-toward-your-backside exercise in flip-flops (I did) – she made me want to come back.

Both she and Josh, who has worked with me twice since that first clueless day, have been super-accommodating of the facts that a. I have a shoulder injury I am being careful about and b. I have absolutely no idea what I’m doing. They make me feel like it’s the most fantastic thing in the world that I came, like they have been waiting for me, like nothing makes them happier than helping me figure out how to properly step up on a big box or how to thrust a kettle ball for maximum benefit to my butt muscles (which I know have a name…gloots?). I use a baby kettle ball. You can see it (kind of hiding) among the other kettle balls of higher-strength-requirement status.

3. They have the most wonderful dogs walking around – perfect muscle dogs, perfect gym dogs – that are gentle and sweet and even some comic relief sometimes. This face tells you everything’s gonna be okay. 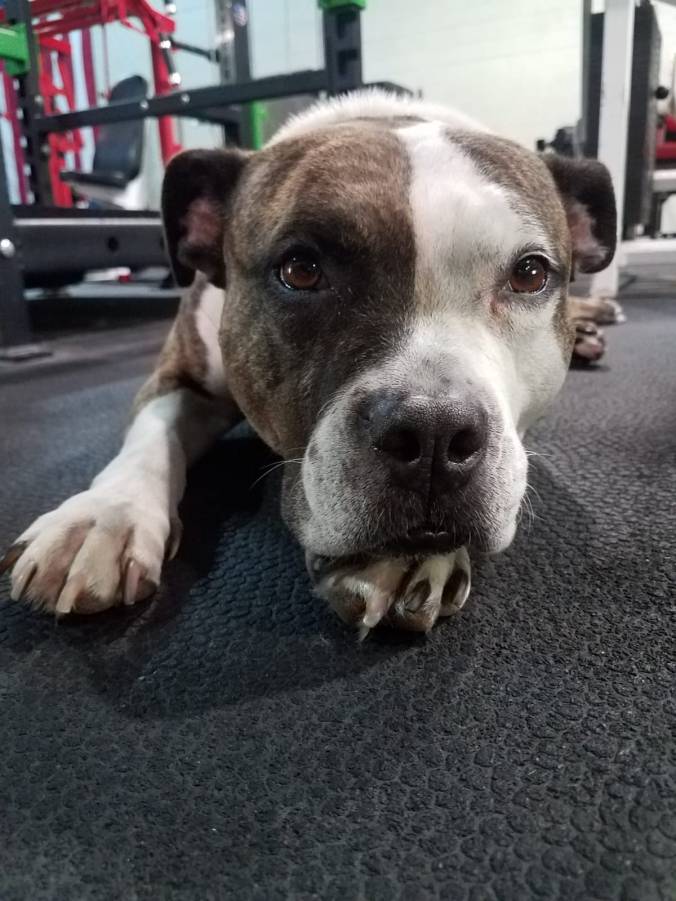 4. They have a huge American flag hanging in there. I like that! God bless America. This is the entrance. I told you—not foo-foo.

5. Many people inspire you. Look at Leslie – she’s totally beyond amazing! That pole she’s holding on her very strong shoulders with her very strong arms has weights hanging on each end by way of very strong rubber bands that are not only very heavy (no baby weights for her!), they are not very stable. She said it’s really hard. Ya think? She doesn’t just hold the pole – she holds it while walking across the floor and back with knee-to-floor-touching-lunges! I was probably too astounded in watching her to be able to get a single, not-blurry-in-any-way photo and I’m sorry about that because she should not only have a great photo, she should have a prize!! 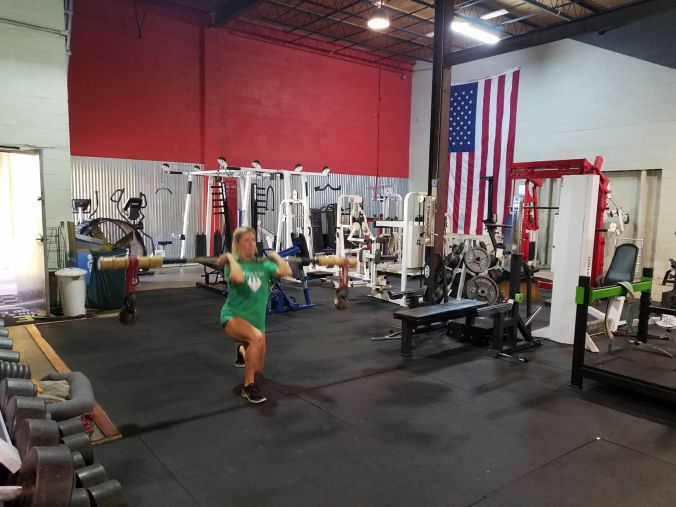 I’ve been to The Gym three times now – one cardio class and two lower-body strengthening classes (I’m right now shy of too much upper-body work on account of my bad shoulder). Samuel goes at different times. He (who did all the registering and everything) went on Friday after my third time and said they sheepishly asked him my name. He said they’ve just been calling me Mom (don’t you think Clueless would be a better name?!). Not knowing/using a person’s name is one of the cardinal no-no’s of the hospitality world I worked in for so many years – if you don’t do anything else right, at least use the guest’s name! But it didn’t matter a bit to me whether they knew or used my name or not. They did everything else right. Everything.

Josh even made me try this rolly thing that I hated, cuz, you know, maybe I’d like it, maybe it would be my new favorite toy and he had to find out. Let me repeat, I hate this rolly thing. It’s very heavy, crushingly heavy. Josh said everyone hates it. I hate it more. You are supposed to place it gently (trust me, you have to do this gently) on your thighs and roll it slowly toward your knees and back again. Abby smiled mid-roll for the photo.

How she can be smiling I have no idea, unless it’s a smile of pain – you’ve seen those. How she can even consider drinking her coffee or checking her phone while doing this is unimaginable. I repeat, I hate that thing. But Josh didn’t make me do it the second time. Maybe, remembering my ordeal first time, he had the tiniest bit of sympathy? Probably not, probably he just forgot. I want him to forget that thing every time.

6. There’s a big container of chalk next to the weights. Do I know this from personal experience? Am I spending time near the dead lifting area? (Or is it the deadlift area?) Hardly. Samuel discovered the chalk during his own workout and said it sets this gym apart. Here’s why: Chalk is a mess. Some gyms don’t even let you bring in your own because they don’t want it all over stuff (which they then have to clean). But if you are serious about lifting (so says Samuel), you need chalk. This gym is therefore serious.

Another thing (7.) I like about The Gym is that even though I’m sure I don’t fit their typical profile, they are excited that I come. They don’t just say hi in passing while they occupy themselves with other important stuff – they make you feel like you are the important stuff.

I’m guessing that for Justin and Toni and Josh, it’s like the message about the value of strength training is reaching beyond the people who would already be there. When you love a thing that’s so good for people, that’s so easily adaptable to different starting points and different bodies and different goals, that’s so far-reaching in its benefits, you want everyone to do it and see why it’s so cool. Toni was so excited the first day I went because her mom also came. Who wouldn’t like such a warm and genuine welcome?

They clearly want to keep making it even more welcoming. I’m excited for them that they have a plan/hope/goal to enhance the already great experience of The Gym.

I like the whole thing – the people, the atmosphere, the energy, the careful and personal attention (to make sure, in my case, I don’t hurt myself), the non-foo-foo-ness of it. The whole scene seems to say: give people everything they need (including the non-tangibles) so they can get down to the sensible, serious and important business of getting strong and have fun while doing it. I’m never going to carry that pole with the weights (or have legs like these women) but I don’t think that matters. I want to go to the gym anyway. I like it! Wait, what? You like going to the gym? Wait, what? You WANT to go to the gym?

Clearly a massive mental adjustment is happening here. I almost feel like I am somebody else when I tell you I want to keep going there, like when you catch yourself saying something you absolutely never would have said at any other point in your life, and you say, Wait. Who just said that?

Am I a gym person now? Did this gym change me already? That same college prof of mine used to say 1. You don’t change people’s behavior or actions until you change their attitude. 2. If you want someone to do something, grab hold of something, begin doing something they have not previously been in the habit of doing, you cannot (absolutely cannot) expect them to do it until and unless their attitude toward that thing is changed. If you can be the agent of change regarding their attitude, you will then be the agent of change regarding their behavior/actions. 3. Change attitude first. Behavior will follow.

Well, how about that? Samuel got me through the door and Justin, Tony and Josh make me want to go again. Good for them. Good for me.

4 thoughts on “Six or More Reasons I Love The Gym”