After making such a fuss about chocolate the other day, I thought it only right to post my favorite brownie recipe. To me they are the best brownies ever because they are not straight-up brownies. They combine the best, richest, most-perfect-brownie-texture brownie part with two other elements that set them apart: dried cranberries, with their sweetness/zing and oatmeal cookie, with its delicate crunch and isn’t-it-kind-of-good-for-you draw. 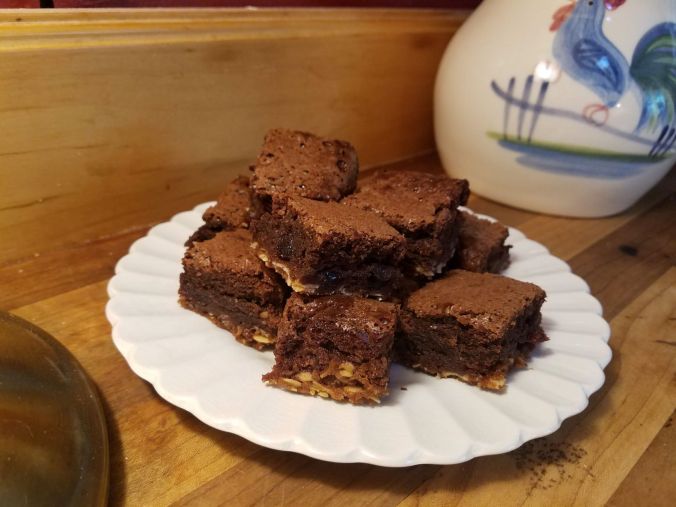 Basically you make what seems like a very small amount of oatmeal cookie dough, press it into the bottom of the pan, bake that for ten minutes while (in the meantime) preparing the chocolate part, to which you add the cranberries, pour it over the now-baked-for-ten-minutes cookie base, and bake for another 40 minutes. Done! Chocolate heaven awaits!

This is now the third blog post that expounds on a recipe found in my Williams Sonoma Cookies & Biscotti cookbook,* clearly a favorite from my library.

I am old enough to have actual cookbooks on a shelf, and they are dear to me! I copied the recipe into my loose-leaf recipe binder at some point, possibly afraid I’d loan the cookbook to someone and then – horrors!! – not have the recipe on hand when nothing in the world will due except these brownies.

My version, slightly simplified (i.e. this is the way I do it). Note the five stars at the bottom! 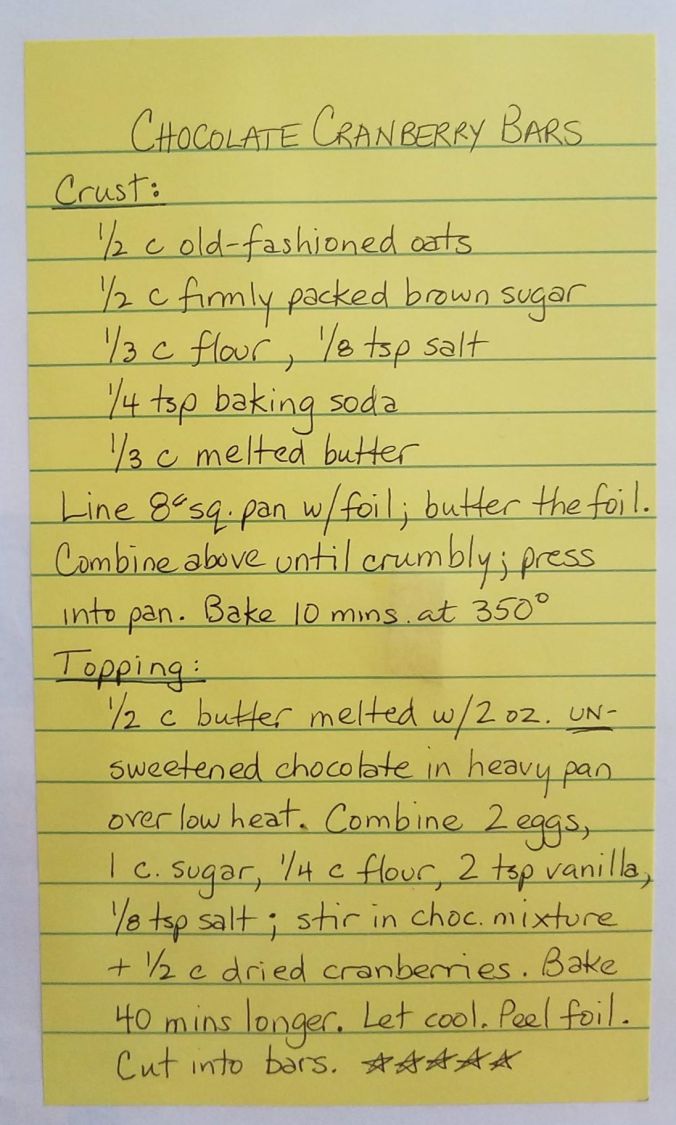 And the book’s version (with metric equivalents, which I know is much appreciated by some of you and I’m sorry I don’t always convert…):

As noted above, the combined oats, brown sugar, flour, baking soda, salt and melted butter doesn’t seem like much, certainly not in the bowl, and even when you transfer it from the bowl to your buttered, foil-lined pan…

…but with your fingers you can spread this out to all corners. My pan, by the way, is a wonderful Kaiser springform pan that Claudia gave me years ago and is also perfect for my chocolate cheesecake. But I have not always made this recipe in this pan. An 8” or 9” square pan works just as well. The wonder of the foil lining is that you can just lift the entire thing out when it has finished baking and cooled slightly.

So here is the oat mixture spread out…

… and here it is after the ten minutes in the oven.

During the ten minutes that the base is baking, you wouldn’t want to be idle of course, so that’s when you make the chocolate part. A better idea is to melt the ½ cup (one stick) of butter and the two ounces/half package unsweetened chocolate (I use this Baker’s brand) … 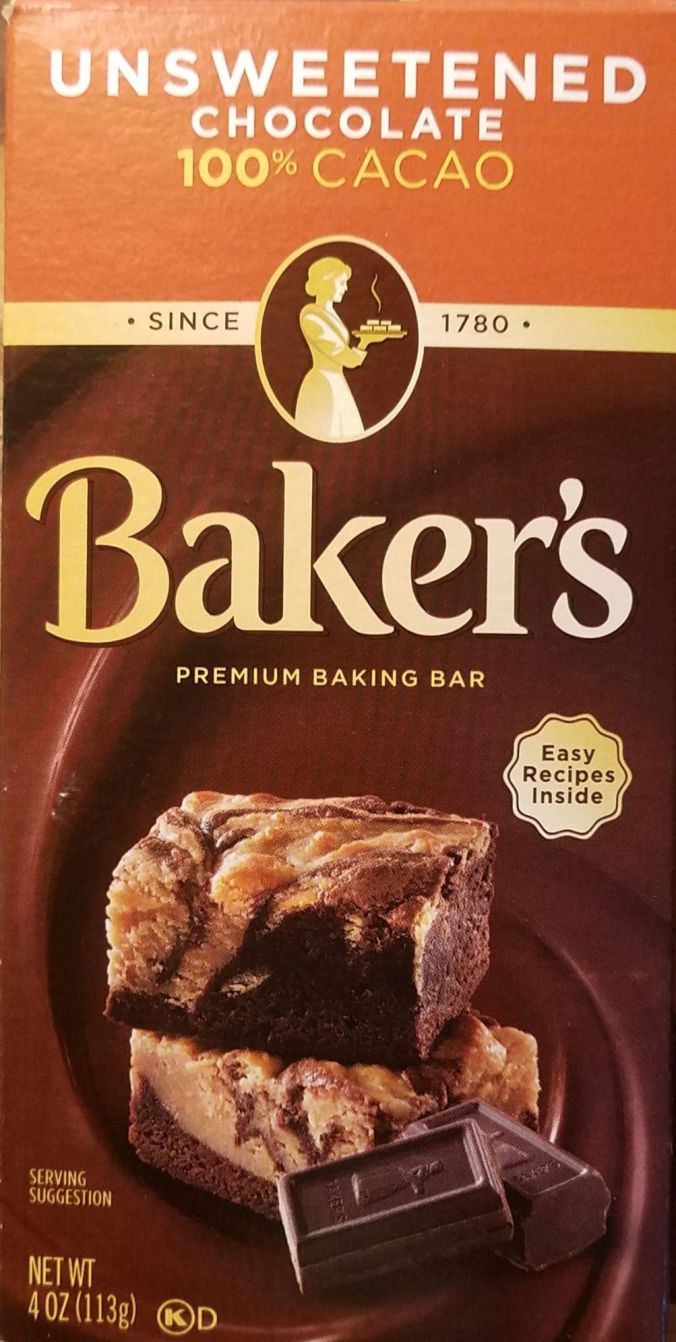 …before you even start with the oatmeal part.

Do get it all the way melted before you let it cool a bit, and then add it to the rest of the other ingredients. BTW I do not use the espresso powder as the original (note not my copied version) suggests, though you are welcome to.

The combined eggs, sugar, flour, vanilla and salt will cream together beautifully with a whisk – is there anything more basic in baking, anything more sublime? (I do this in the same bowl I mixed up the oatmeal cookie dough in. If a stray, left-behind oat happens to mix with the chocolate part, it is not the end of the world.) Then you add the melted-and-slightly-cooled chocolate/butter followed by the cranberries and bake it 40 minutes longer until it looks about like this.

After ten minutes or so of cooling, I unhinged/took away the side part of the pan (or you can lift it out holding the foil) and peeled the foil back from the sides like this. 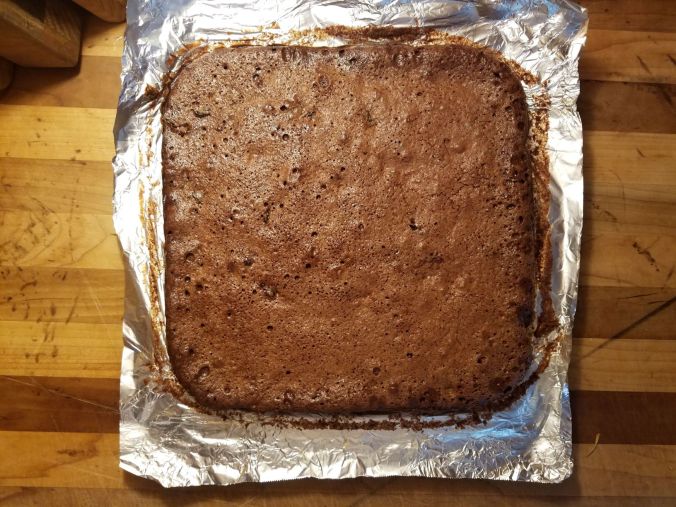 I cut through it right then and there because I wanted you to see the side view.

And then I cut it into 36 little squares. I am playing with numbers for my own benefit here, you see. If the brownies are smaller, I can have two, but if they are bigger, I will tell myself that one is enough. And you know how it is (or trust me that this is how it will be with these brownies) – you will want more!

Voila! I hope you like them. And even if you don’t, for some reason I cannot fathom, your friends and family will! Being as rich and moist as they are, these brownies also travel well – I sent them on a Thursday a few weeks ago to my friend Fred in Kentucky; they arrived on Saturday and he waited till Sunday to eat them – how a person could wait, I have no idea, but that is another conversation.… He ate them with his coffee for breakfast and called them delicious 😊.

*Some of you might recall the Lemon-Anise-Almond Biscotti and the Chocolate Chip Walnut Biscotti.

5 thoughts on “Best Brownies Ever”