“It’s not very often I would use that word,” the forestry consultant said. “But that’s a humdinger.” A few weeks ago a very large branch fell from a red oak that stands next to my cottage. I can’t get my arms around the branch – the branch is that big. It fell straight back into the woods, thank God. But the now-damaged, now-without-its-counterweight red oak has another big branch positioned over the cottage and another pointing toward the utility pole that stands 40 feet or so from the tree.

The red arrow shows where the counterweight branch was. You can see the lean. 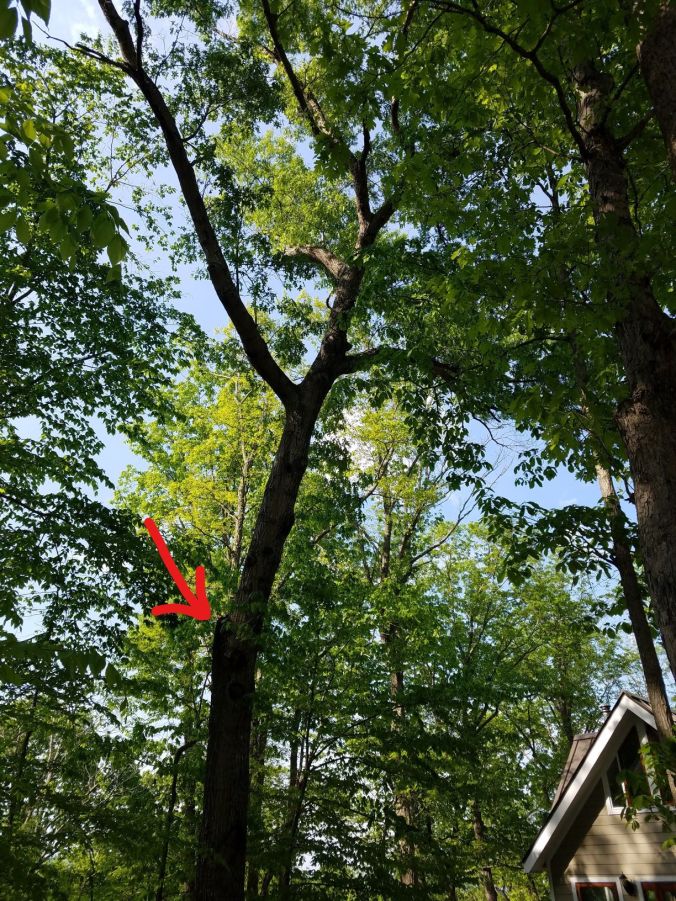 Now all the weight is toward the driveway. This red oak easily tops 100 feet. Other trees stand in that area also, smaller trees (not small, just smaller) between the big, damaged tree and the utility pole. This is a humdinger because it’s complicated.

Could be nothing to worry about. Could be that red oak stands another fifty years.

Could be a disastrous domino effect. Could be a strong wind takes out the power line and demolishes six other trees and whatever else is in its path because the spread, the wingspan, of the upper branches of the red oak would simply grab ‘n go – grab everything between it and the ground and go strongly, heavily (we’re talking tons of weight here with momentum and gravity helping) in the natural direction of all that weight.

Just to the left of the trunk you can see the utility pole. See it looking miniscule there. It’s not miniscule, it’s a real utility pole, and it’s not that far away even though it looks far away. The tree is so tall, its fall would reach that far. For those of you familiar with my property, even though the tree is behind the cottage, its fall would easily flatten the chicken coops.

We don’t know. I don’t know. The power company doesn’t yet know. Take the chance and leave it alone? Or play better safe than sorry and find a way to take it down? To complicate matters further, the underground septic tank for the cottage sits right where the bucket truck would have to position itself, and a bucket truck is too heavy to stand there. I don’t know where else they can put it though. And unless they use the big bucket truck with the longest-reaching boom, how else would they reach those upper branches?

My idyllic spot in the Virginia woods – private yet close to town, scenic, peaceful, enjoyed time and again by so many people, including my many Airbnb guests – has its challenges, its downsides, its uh-oh-what-do-we-do-now moments. In this way it’s a mirror, a parallel to the world we all live in every day. We have some elements of beauty, some moments of peace, some examples of systems functioning perfectly. We have a sun that shines, food that tastes wonderful, a bed to sleep in. Most of the time we have well more than we actually need.

And then a windstorm comes and a big branch falls and we worry. Or we encounter something super icky or ugly and we shudder. Or someone loses his temper and says hurtful words, or someone has her own set of struggles and walks away without helping us with ours. Or they take way too long to bring our food or fix the broken pipe or return our call. Or someone we love dearly breathes his or her last.

It’s a recurring theme around here lately. Maybe it’s just the recurring theme of human life that somehow strikes me anew every day: With the good comes the bad. With the bad comes the good. As much as we humanly can, may we keep our eyes fixed on the good – on the person trying hard (even if we don’t see it), on the sweet smiles revealing a good heart (even if that heart is hurting too), on the glorious colors of nature around us, on the wondrous good fortune of living where we can go about our business without worrying about shellfire exploding and without having to pee into helmets or step over corpses or sleep in cold mud.

Okay, maybe I have been listening to Dan Carlin’s Hardcore History podcast a lot lately. His “Blueprint for Armageddon” series about the First World War is so excellently done, starting with the suggestion that maybe the most important person of the 20th century is someone whose name hardly anyone remembers: Gavrilo Princip, the man who fired the shot that killed the Archduke and his wife in Sarajevo on June 28, 1914, thereby setting in motion the whole war machine as well as decades of repercussions.

Carlin’s emphasis on the human factor within the extraordinary conflict is both as graphic as spoken words can be and as spot-on accurate as any historical overview I’ve heard or read in a long time. His use of first-person sources is first-rate, as is his ability to paint a picture that doesn’t include actual pictures (in my mind as I listen I see battle scenes and broken vehicles and sickening trenches so clearly!). Hats off to him for researching, organizing and weaving together so many compelling stories about what was supposed to have been the final battle, the War to End All Wars. If you can listen while driving or cooking or walking or whatever, you might find it as captivating as I do.

In my unboring path recently, I’ve gained a fresh perspective on one funny word – humdinger – because of a recent strong wind, and one age-old word – Armageddon – because of a most fabulous history lesson. I wonder what words will pop up next…

3 thoughts on “Humdinger and Armageddon: Words of the Day”