I realize “anunboringpath” doesn’t exactly roll off the tongue. Let me explain.

My life’s path has been figuratively all over the map: this, that, up, down, conventional, unconventional, never a dull moment. Throw in some great trips, some outstanding people, some unexpected challenges. Definitely unboring. Therefore an – un – boring – path.

One unconventional thing we did was homeschool. Yesterday Samuel was telling me about an article he read; apparently the number of people using the educational approach that for us was also a lifestyle has been rising steadily. It got me thinking about those years. We started before home computers were a thing, before cell phones were a thing, before house phones (at least ours) were even “cordless.” We were not pioneers in the movement, but certainly we rode the earlier wave.

Drew, Marie, Bradley, Lincoln and Samuel rode it with me and a cream-of-the-crop co-op group for fifteen wonderful years. Here is one photo from when our group performed Charlotte’s Web with an open barn door as the stage and homemade paper mache marionette puppets as some of the animals (thank you, Beth Masters, for the photo!). 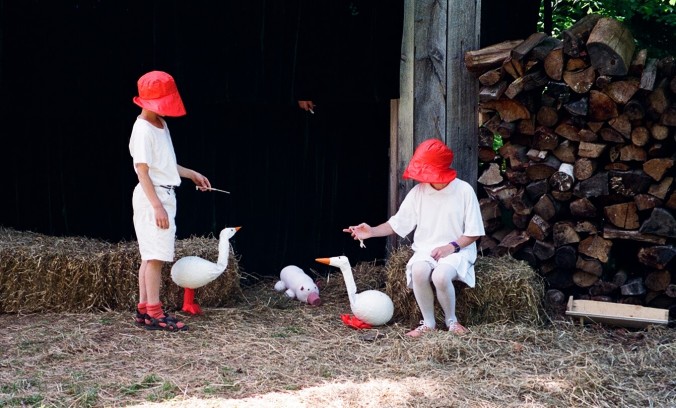 If ever a path was unboring, ours surely was. In 2005, when the three oldest were in college, I decided to write a bit about our experience, using “Un-boring” in my title (I had never seen it in use and assumed the hyphen). I sent my article to Maurice Gibbons, an eminent Canadian educator whose website is all about self-directed learning. He not only posted it, he also encouraged me in my writing more than he will ever know. (Thank you again, Maurice.) Below is the article, slightly edited from the original, and now you’ll know where my blog name comes from.

Unexpected Consequences of an Un-boring Path

The adventure we called homeschool began with the element of intrigue. What’s it about? Why would you choose it? Could it be better? Could it be fun? How do you know what to do? Who can you ask? And hmmm, did I have the guts?  Back then, I decided that if I didn’t at least open the door to an unconventional education for my children, I would regret it, so I had to try. “It’s only kindergarten,” I said to myself that first year. “How can you mess up kindergarten?” One day at a time, and one year at a time, I did the best I could for my children. Funny thing happened through the years though: they aren’t the only ones who learned a lot.

I didn’t set out to review the scope of world history (several times), skin a raccoon, study soil types, write a play, walk battlefields, debate whole language vs. phonics, start a hydro farm, or read some of the best literature in the world – let alone reshape my own views on the process of personal and intellectual growth. All I wanted was for my kids to have an education that was well above mediocre, and for them to have fun in the process. I wanted them to know what they needed to know, to be able to think, and to love learning, to hunger for it, to be forever un-bored. How hard could that be?

Very early on, one of the first pieces of advice I got was an old, familiar proverb: Give a man a fish and he eats for a day. Teach him how to fish and he eats for a lifetime.  A well-prepared piece of fish satisfies hunger much the same way as interesting content satisfies curiosity, and it’s important to know about the world. Did you know that the son of President Calvin Coolidge died from a simple infection because they didn’t have penicillin in the 1920s, that March winds stir up lake waters to bring needed oxygen to drowsy underwater creatures, that dungeon walls were three feet thick so as to block the screams of the prisoners, and that staring at constellations has had a highly useful purpose?

But what if we got so engrossed in studying the Cherokee that we never got to the Sioux?  How much should we work at learning about the various -stans of eastern Europe and Asia (Uzbekistan, Kyrgyzstan…) when we actually find the mountainous regions of South America endlessly fascinating? What if we really (no matter how hard we try) do not see the purpose of diagramming sentences? Here’s a thought: Why not just focus on the fun stuff and ignore the rest? Who cares if they have their times tables down pat or can write a cohesive paragraph?

Ultimately, they care. Ultimately, little by little, each of them, individually, came to “own” their education, to fit most of the pieces together, to juggle the goals and the time constraints, to truly self-direct – and that’s when the real fun begins. The research, the questions, the people we meet, the places we explore, the discoveries we make – all these things work together and become transformative. Isolated bits of information find connections to other bits. Process kicks in and finds rhythm. Questions beget questions, learning begets more learning, the tools get sharper, and real thinking ensues. We don’t just enjoy the story – we understand the reason some books never go out of print. We don’t just know the times tables – we see them as a witness to structure and order in the natural world, indeed, as a thing of beauty.

How to fish envelops the notion of how to think, how to figure out important things like Does it matter if we spent more time on the civil war than on the revolutionary war? What is the bigger picture here? Above and beyond all the exceedingly interesting facts, what did we learn about the way things work, the trends and behaviors that define us, the hooks to watch out for? What did I learn? Bottom line is, all this time, when I thought I was helping my children to ultimately own and direct their own learning, I was in fact figuring out some important things myself.

I learned that success comes in increments, that overall progress is far more important than the minutiae of content. Are we going from simple division to long division within a reasonable period of time? Do we wake up one day and find that the child who liked to stir the pudding is now seasoning the soup? Is the one who had to be coaxed into saying hello now volunteering to shovel snow off the neighbor’s walkway?

I learned that some people learn better by seeing, some by hearing, some by being actively engaged with said subject. If digging parallel trenches in the deep snow and simulating (with snowballs) the no-man’s-land of World War I impresses on a child even one detail of the reality of that conflict, I’m all for snow trenches. If drawing birds outside on beautiful spring days leads to a career in wildlife management, I say: Draw birds.

I learned that the people who are asking questions are the ones doing more of the thinking and the learning, and that children ask fabulous questions. I’ll never forget when Samuel asked, “Mom, why can’t the strings of your tennis racket just stay in whack?”

I learned that those who worry about the social competencies of people who are not in conventional school settings are worrying about the wrong thing. When you work closely with people on projects that are important to you, when you are with them all the time, you can’t wear masks. They see your points of enthusiasm and frustration, your organization and your chaos, your good and your not-so-good, and you see theirs, and everybody had better figure out how to get along.

I learned that people progress at their own rates. I have no idea how Lincoln learned to read; one day Marie was making a paper crown for him with the letter A on it, and the next thing I knew he was reading. He was four or five at the time. Bradley didn’t read until he was nine, try as I did (and by golly, I tried!) to help him see patterns in language. But in high school he aced honors English and has since earned a master’s degree.

I learned that some people have no idea how to direct their own learning. Years ago, we had a visiting foreign exchange student who came upon Drew at age 12 reading a hefty volume about World War II. She came to me utterly perplexed, almost speechless: Why was he doing this, she asked. Because he wants to, I said. She said she never read a book in her life unless somebody told her she had to. I thought: How much you miss!

I learned that Plato was right, at least on his point about dialogue. People more likely arrive at truth and meaning, and more likely cultivate wisdom, if they talk out an issue with open minds, if they challenge each other to think past what is already understood, if active discourse is esteemed and practiced. How much better it is when the format allows for various views on the bigger questions like:  What are some concrete ways that world poverty can be addressed? Why is it a violation to read someone else’s mail? Who should be allowed to own a high-powered rifle? When does life begin?

I learned for myself, the real (sometimes hard) way, that life includes surprises, that people both delight and disappoint you, and that you usually can do things you never would have thought you could. My own path has been circuitous and downright puzzling at times, but when you give, you get something back. Likewise, you think you are teaching, but it turns out you are learning.  As time went on and my own learning took root, I “owned” the whole enterprise more and more, directed with confidence (acquired over time) and embraced our unconventionality. The spine of John Holt’s Learning All the Time stared at me through the years and boldly reminded me what learning how to fish came to mean for us: pacing ourselves individually, engaging actively, pursuing excellence, valuing process, questing for meaning, wearing no masks, keeping the fun (so much fun!), and seizing the day.

I continue to learn that good comes where good has gone before, and that being in charge of your own learning rewards you monumentally. Bradley called me from college once to ask for a recipe and related his discovery about how much soup 2 ½ pounds of beef and a full pound of barley will make. “But I only used seven carrots!” he said.  If you think I was smiling at that, just imagine how I felt when I asked him how things were going, and he said, “I’m totally unprepared for this course I’m taking, but I know where to find what I need and how to figure out the parts I don’t know. I don’t think I’d know how to do that if we hadn’t learned how. Thanks, Mom.”  He really said that.

3 thoughts on “My First Use of “an Un-boring Path””