Two little girls. My world is more wonderful this week because Rise and Eppie are here. By the time they are six and four, there’s more they can do on their own. I do not have to accompany them to the chicken coop every time, but can suggest there might be eggs, and off they go.

If you look carefully, you can see the chickens at the door of their run waiting for Rise. Food! Food! Humans approaching! They bring food! Not this time, ladies!

That’s my hat she’s wearing, and she loves it because it’s purple. The love of purple applies universally. In other words, if it’s purple, she loves it. This one is especially appealing because besides being purple, there’s a flower on the side. She likes it so much, she wears it indoors sometimes. 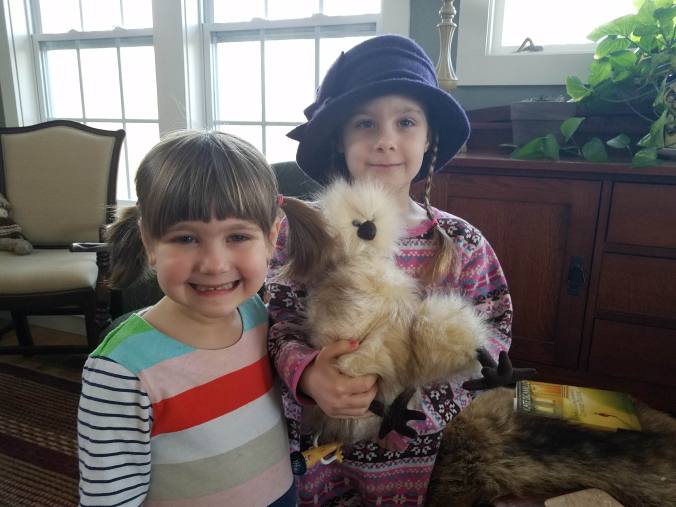 (Yes, that’s Edward Tulane sitting on the table next to Rise on my raccoon skin. They loved reading through it with me the first two or three days they were here. Imagine, as soon as Edward was thrown overboard, Rise said, “I want him to get back to the little girl!” Do you remember what happens at the end of the story? Do you think the author anticipated that a six-year-old would want that?)

On another day, a colder day, Rise got the first 13 eggs of the day and Eppie went out later by herself to get one more. (Don’t rush me! Don’t rush me! one hen said.) Yes, another hat of mine under her hood. If you are an Oma, it is best to have a selection of hats available when the little girls come to visit.

There’s nothing like a good Ravensburger puzzle to occupy Eppie for a few minutes. She had both 20-piece puzzles together in no time. (I have a puzzle with chickens on it. Imagine that!) I hope kids everywhere are still doing puzzles.

I hope they are still eating apples too. I cut up two different varieties and put them in separate bowls and suggested they might do a taste-test to see how they compared. Rise said one was tart and one was sweet. Fair enough. Looks like they each found a favorite.

Eppie likes reading aloud whether anyone else is listening or not. My mom gave them a marvelous reprinted Dick and Jane set for Christmas, which has adorable drawings and easy story lines. Here she is reading Green Eggs and Ham without prompting. Once in a while she needs help with a word. But only once in a while.

“Oma, I found paint downstairs…” Ah, yes, children’s paint, supposedly washes out of clothes. But let’s not take that chance. I pulled out the aprons I still had from when my own kids were little, set an old shower curtain liner on the floor and gave them gloves to wear (which did not work on Eppie at all and I had to take them off and take my chances on how well the paint would wash off skin – it did!).

After this, they did not want to paint again but Rise wore the apron nonstop. I didn’t realize till later that she was wearing it in this photo of all of us. 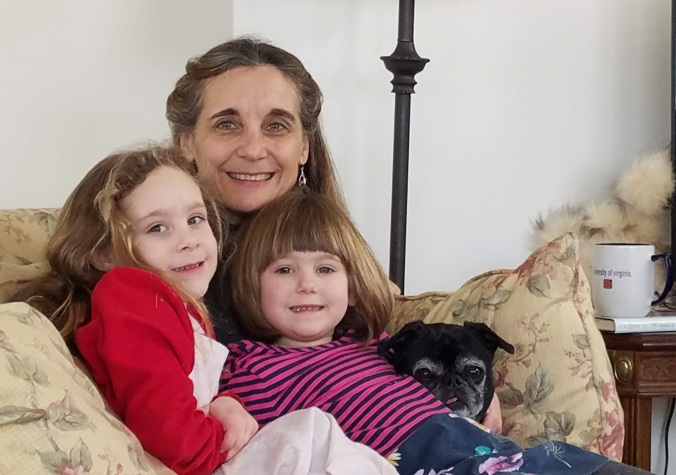 Which got me to thinking. Of course. She should have one of her own for when she goes back to her house. They both should have one. While Eppie was sleeping one day, Rise and I went into my newly reorganized fabric scrap boxes (I knew I did all that last week for a reason!) and found some pieces that would be big enough for an apron. Rise settled immediately on a pale pink calico, but we didn’t want to decide for Eppie, so we found several. Eppie chose blue over green, which was a surprise.

Today was a good day to sew. While they played quietly in another room, I got to work, modeling the new ones after the old one. The girls were right there to measure when I needed, so it was easy. Waist to knees and height and width of bib, that’s all I need. The rest was gathers and ties. The girls were a little too quiet at one point. Hmmm. I found an abandoned mess of crayons later. When I asked about it, they said, “Oh, we like to clean!” Good thing, because I’m not cleaning it up.

They were tickled with the aprons. And I was tickled when Kim said (in response to this photo I sent her), “Oh gosh – straight out of another time.” Indeed they are, though I didn’t think about the fashion era they represent until she said that. You see, girls (these girls anyway) love twirling, and if the skirt is full, the twirl is greatly enhanced. And the ties are long enough to make a bow in the back. Rise always wants a bow.

If you know anyone who wants one (and I don’t mean Coco!), just let me know 😊 All I need is measurements!

4 thoughts on “Girls and Aprons: Straight Out of Another Time”