Hopefully every one of us bears witness to – or is blessed to be part of – a truly wonderful marriage. I’m talking about the kind of marriage in which both people know beyond any doubt that they are each other’s best friend, that only together are they the best individuals they could be, that because of being together their lives are full, rich and meaningful to the limit of what humans can experience and that words like commitment, trust, companionship, care and joy are not just words, but are lived out in tangible, consistent ways.

Lyn and Bertie had one such marriage. I got to know them in my early 20s and was blessed to watch in awe for decades as they walked their godly ways, kindly opening their home to me and many others, being the best of neighbors and friends, modeling grace, humor, generosity and gentleness. Ten years ago we stood in their living room capturing a single moment in their wonderful world. 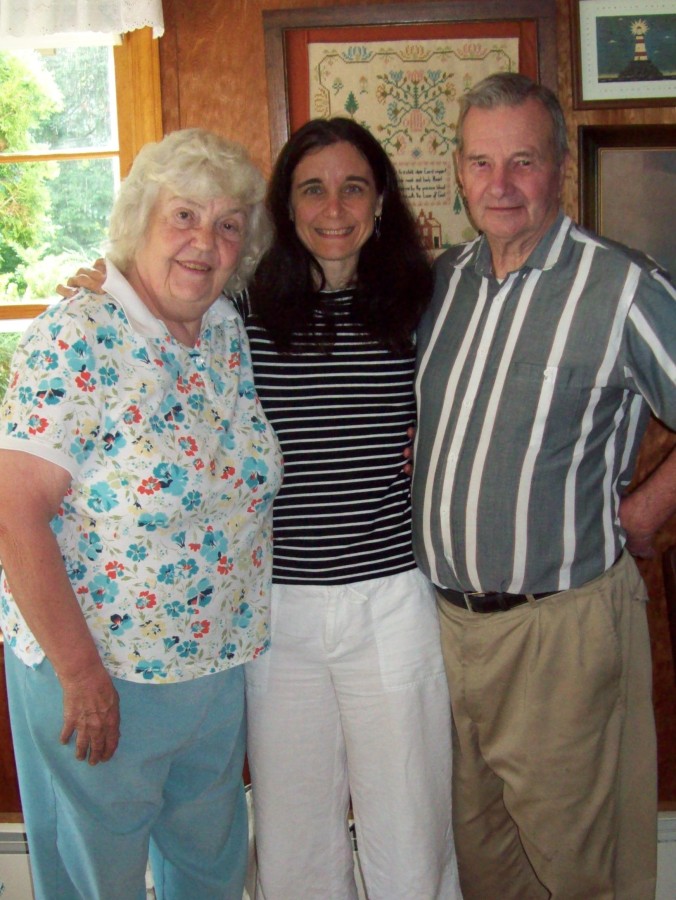 We never want sad things to happen, especially to people we love, but we know we are not immune, that we will not escape crying buckets when the realities of life and death impose upon us their at-times-devastating ways. There are no words for the heartache that comes, as it did for Lyn a year ago, when one of a perfect pair is left behind.

I had tried for years to tell Lyn how much she meant to me, how her everyday walk inspired my own, how her selfless service to those in her path shone brightly and brought good beyond measure. I wrote notes and letters mostly, but words are just words, as they say, and you can’t hold them in your hands and they don’t dry tears.

My dear friend Kim, Lyn and Bertie’s only daughter, had an idea that turned into an opportunity for me to show my love, gratitude and admiration. Shortly after her father passed away, Kim told me she wanted to use his shirts to make pillows (or something similar) to remind her own sons and their cousins of their grandfather. As we talked, the idea quickly evolved into using those same shirts to make a quilt for her mom – a way to help her feel close to him, to be wrapped up in him, to have a part of him near. Kim said the only problem was that she herself would have a hard time cutting her father’s shirts.

That’s where I came in. One thing led to the next and Kim sent me the shirts – mostly conservative, neutral buttondown oxfords that were either solid color or had teeny, muted plaids, but also one dark green solid, a work shirt as Kim called it. All of them had (as men’s shirts generally do) a chest pocket. Bertie always kept a hard candy in his chest pocket to be able to offer one to others, but also, as Kim says, “as handy access for himself because he loved sweets!” He also liked to wear bold-striped rugby shirts, but using knit fabrics along with woven fabrics would be tricky, plus the stripes are proportionally bigger than would work well.

Kim agreed to leave the project in my hands. I did what I always do when a quilt is happening – I opened my own fabric scrap boxes and began to see what might work alongside the shirt fabrics. By themselves, the oxfords and the one dark green would have a hard time being interesting, even if they were the core of the piece. I found some perfect blue and white bold-striped material, a miniature version of rugby stripes that would serve as the rugby element and got Kim’s permission to add color and some femininity – it would, after all, be a lady’s (a dear lady’s) quilt and lay on her bed in a room papered with tiny rosebuds.

I had some other good coordinating fabric scraps, but not enough, nor enough variety of color. Coincidentally, my friend Anett was coming from Germany to visit for five days in April. If anyone has an eye for color and design, it’s Anett. We went to the store and found the following to add to the shirts and what I already had.

Making a quilt is more fun together. This was already a group project with Kim’s idea, Anett’s eye and Lyn’s consent. It was even better that Anett was willing to iron, cut and organize squares with me. We even got a few of the nine-squares sewn together while she was here. My dining room table was the perfect work surface. 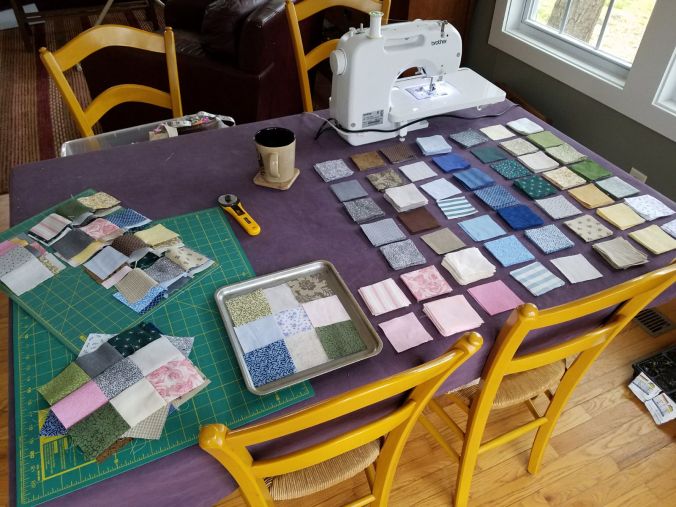 Anett and I cut large squares of the shirt fabric and alternated these with nine-squares that themselves were put together with a variety of fabrics. After Anett left, I kept going, hugely motivated by the hope that somehow this quilt would bring comfort to Lyn. I knew I was taking a chance with the additional fabrics. I hoped, for example, that the polka dots (tiny as they were) wouldn’t strike her as frivolous or too playful at a time when her heart hurt so much.

I played around with the arrangement a good bit, getting closer to what seemed best every time I moved them around on my bed, and finally got them connected with the strips of gray that form the mullions of the panes. I chose a lighter gray for the back, a soft flannel sheet in fact that looked silvery to me, like the silver lining of a cloud. I chose one of the shirt pockets and appliqued it on the back of the quilt in the upper left, about where (proportionately) a shirt pocket sits on a shirt.

The dark green worked as a defining border around the edge. Kim said later, “One thing that struck us about the quilt is that you used my dad’s work shirt cut into those small strips as the edging to frame it and hold it all together. Far beyond the dark green edging looking nice, it was symbolic of my dad’s hard work, strength and care for his family.”

I quilted the three layers together and carved Bertie + Lyn on a tree, so to speak, on one of the shirt squares. If any part of this project brought tears to my eyes (and still does), it’s this.

Some of you may recall that in the early spring there was a huge building project at my house – a new chicken coop. I had helped dismantle the old run, dig post holes for the new run, set the cedar posts in cement and erect the foundational elements of the new coop. Then right at the end of April, I got sick. I got a coughing sickness that kept me pretty much planted on the couch for almost a month. By the time this happened, the main part of the quilt was together and mostly handwork remained. Had I not been sick and confined to indoor, quiet work, I am not sure how this quilt would have been finished by the time Kim and I planned to rendezvous at Yoder’s in Madison, Virginia, for the hand-off in May. But it was.

Before I packed it up, I put a hard candy in the pocket.

Kim had asked me to send a photo of the quilt while it was in process. I had this photo of it finished… 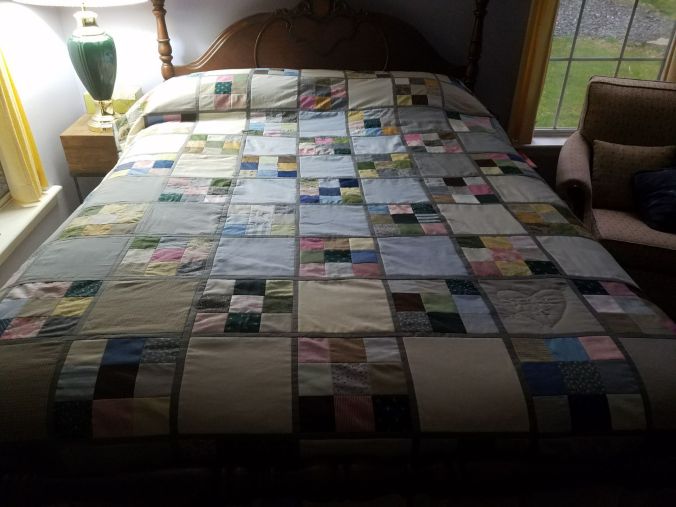 … but I told her a photo would spoil it, would not give the best idea of it (I still think this) so I didn’t send it. She waited. I was very happy that when she finally held it in her hands, she was sure her mom would like it.

Along with the quilt I sent a note to Lyn. It included: No doubt you will recognize Bertie’s shirts. But all by themselves they would have made a very dull quilt indeed and not come close to reflecting his unique personality. Plus, we all know that only together with you was he the man he was. You were there every step of the way and he needed you as you needed him. So the quilt had to reflect you too. You are so beautiful!

Oh the fun I had! There had to be some bold stripes for his rugby shirts, a pocket for his candy, some rosebuds and other flowers and some pink for you, some softness, some delicacy, splashes of color, old and new, subtle and fun, conventional and unexpected, greens for the Green Mountains of Vermont, blues for the glorious, endless sky, golds for the golden years you had together, your names carved together somehow (I hope you like the how!).  Hopefully the fabrics, each in different ways, bring you good, peaceful, comforting thoughts, and the combination of them pleases your eye and your heart. Hopefully it looks nice in your room and adds warmth in ways that only God can make happen. Hopefully Bertie feels a little bit closer.

Lyn sent me a beautiful, heartfelt letter of thanks that overjoyed me. Kim said, “The quilt is a treasure. Mom snuggles down beneath it as she rests. I often go in and rub my hands over it when I am at the house. It feeds the longing I have to be near my dad. I think the quilt, made with love and with all its symbolism, is the most beautiful gift you could have given my mom to bring comfort to her broken heart.”

When I went to Vermont in August, I got a big hug from Lyn and was able to see it on her bed. How blessed am I to have such marvelous people in my life, and how grateful to have had the opportunity to give back some small measure of good to Lyn, who has done more for me and for everyone around her than she will ever know. 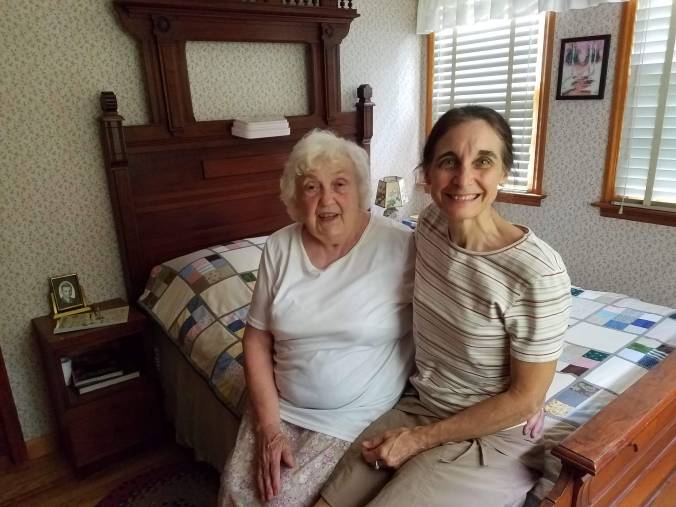