A Shower or a Fridge: Which Would You Choose?

Lincoln and Julia’s one-of-a-kind, pentagonal, straw bale house was first of all a dream. It did not come in a kit. There were no pre-existing plans. This photo, taken with immense joy in late 2018, shows the first time smoke came from their stovepipe. Walls, roof, heat — these must come first.

Houses like this, especially when you are building them almost single-handedly, do not come together quickly. It took nearly two years on the property for Lincoln and Julia to be able to abide in this abode, even if it is far from finished. Until then, they all had to rest their heads somewhere. The choice seemed perfectly logical: a temporary dwelling just down the hill.

In the late winter of 2017 they bought the land. The first two weeks (thankfully now just a memory) they slept in … a tent. That year at that time was not as snowy (snow might have been less brutal) as it was rainy — a nonstop, 40-degree drizzle that erased the snow but gave them nowhere to warm up. In their memories this qualifies as the worst part of the adventure. But spring came and with it, the beginnings of permanency. You can cook outdoors on a camp stove for a while, but an indoor kitchen, however rudimentary, has advantages.

The yurt that would be their home for nearly the next two years had been erected twice before – the first time on a hillside overlooking Mt. Mansfield immediately following their wedding in October 2011. (Yes, they lived in it all that winter! A small wood stove inside heats up the entire space to a toasty 65 degrees or so, and 65 feels toasty indeed when it’s 4 outside.) The second time was for a short while in Virginia before Rise was born.

This time they sunk pressure-treated 4x4s down to bedrock and built a non-equilateral hexagonal framework of double-beamed 2x10s. That’s three long double beams laid parallel to each other — one 17-footer (about 5.2m) across the middle, one on each side of it about 8 feet away and four more that closed in the frame, like my imperfect sketch (you get the idea).

The 2×6 joists that stood on end across the framework then each had at least two points to rest on.

So far this was more like a freestanding deck than the base for a dwelling. But let’s be real — this is Vermont and it gets mighty cold. So they got underneath, stapled landscape fabric to the undersides of the joists and filled all the in-between spaces with regular loose-fill cellulose insulation that was repurposed from the walls of their good friend Zach’s house. The insulation provided a critical measure of warmth and the landscape fabric gave incidental water a way out. 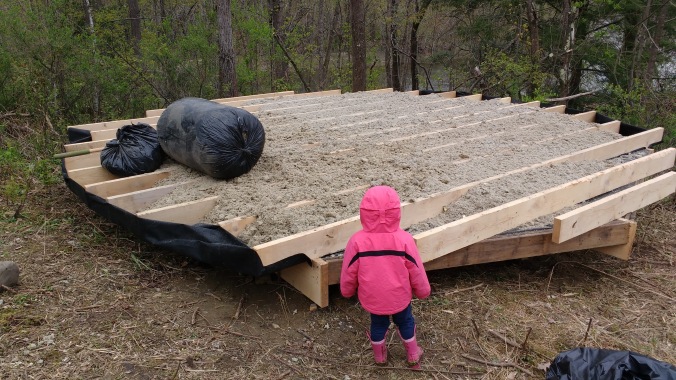 After the insulation between the joists came the pine plank flooring. Remember this is the third go-round in a yurt. They chose pine planks “after not enjoying being on osb or dirt.” (OSB, oriented strand board, is, according to Wikipedia, “a type of engineered wood similar to particle board, formed by adding adhesives and then compressing layers of wood strands (flakes) in specific orientations.”) Lincoln says, “It’s not really a great foundation,” but it served them well.

To be able to cut the pine planks where they needed to be cut (see them lying flat but sticking out under the lattice?), they first put up the accordion-like walls, then circularized the bottom by suspending the cone-like framework of the roof on the lowest intersection of the lattice. 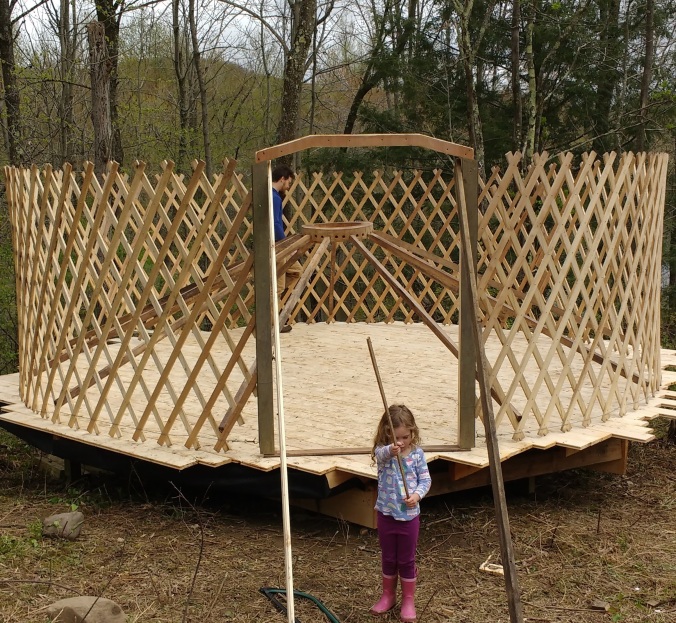 The roof framework was then disassembled and reassembled up in its proper place, as you see in this photo. The opening in front is for the door of course. 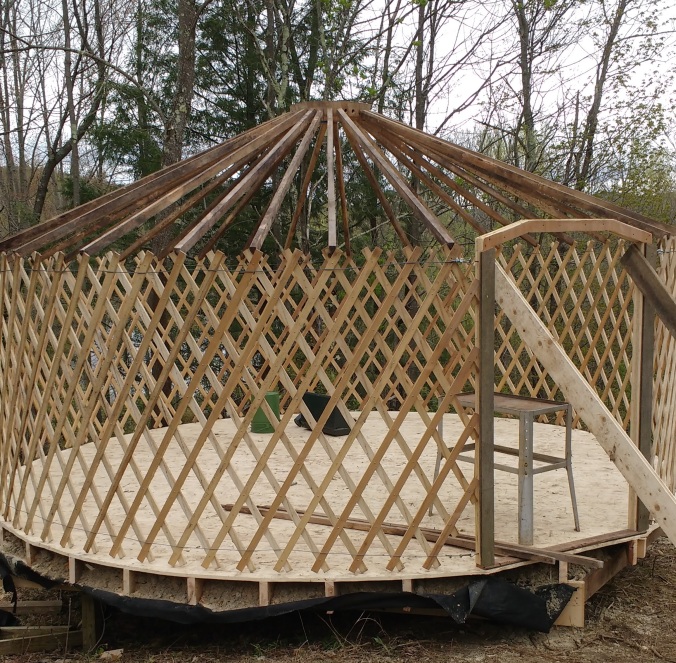 The canvas, having been used twice before and clearly showing wear, tear and rot from four years of storage and getting hauled all over the place, was not in its original very white condition, but it did the job surprisingly well. It wasn’t long before this simple structure began to feel like home. Let’s just take a nice book and sit in the sunshine! That’s Eppie, almost three.

When I came to visit that spring, all was in order. A workable kitchen area with running water, gravity fed from a nearby stream (the red tube hanging over the sink)… 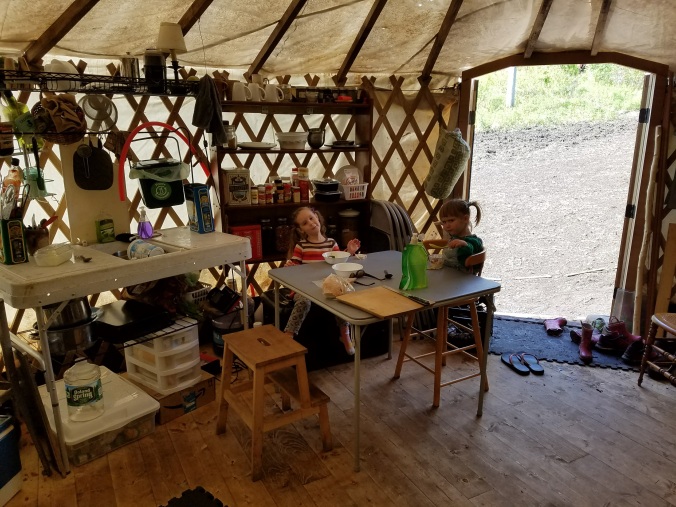 …small bunk beds for the girls along one side…

…and Lincoln and Julia’s bed against the wall during the day when not in use. 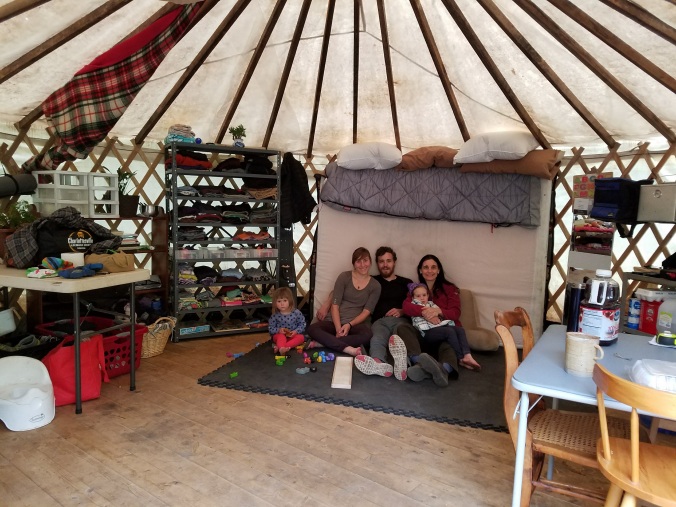 As summer went on, the grass came in, making an idyllic front yard. Their garden, with natural fencing to keep small critters out, included strawberries, tomatoes and squash.

Probably the most exciting thing that happened that year was on July 25 when power came!

The very first thing they hooked up was a small, dorm-style fridge, which very much improved upon the previous need to continually refresh the ice in a cooler. Oh, the joy of a cold glass of milk! 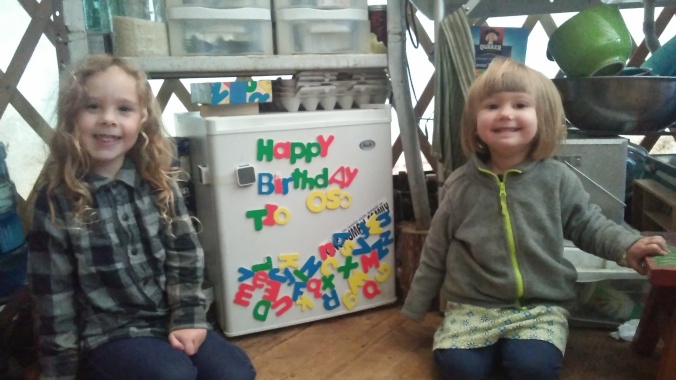 “Refrigeration!” Lincoln said. “This may have been the happiest day of the whole project to have that modernity. Real running hot water/a shower will probably be the only thing to top it.” They put the full-size fridge near the site of the barn initially, next to that glorious fuse box! To put it in the yurt required a proper gauge wire (that would support a full fridge’s amperage draw) long enough to make the 310-foot trek between fuse box and yurt. That didn’t happen until the following spring.

You will note the absence of (and have perhaps been wondering about) indoor plumbing. When it comes down to it, until such time as water from a well would run indoors, they could take hot showers at Zach’s house, use water being led into the yurt from the on-site stream for general washing of dishes and hands, and fill and refill large dispensers with potable water from Zach’s outdoor spigot.

But on site there must be a toilet of some kind, and indeed there was, built according to the same specifications Vermont uses to build the privies along the Long Trail. They figured if it was good enough for the state, it was good enough for them. Countless generations of humans have constructed similar structures and managed their personal needs adequately, if not warmly or luxuriously. I daresay this one is a far cry nicer than a lot of its predecessors. 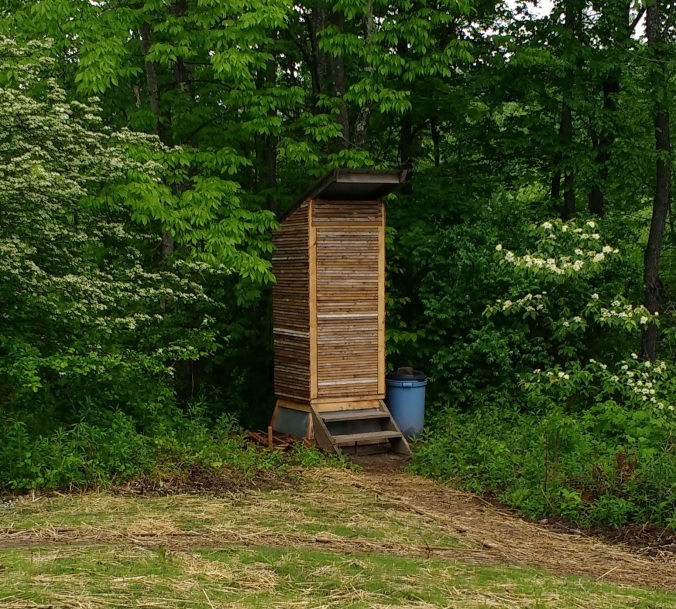 Now think about it: If you had to choose between indoor plumbing and electricity, which would it be? How many of us have to choose? How many of us could (uncomplainingly) manage neither for a while and then one-but-not-the-other until both, in their proper time, were a part of our reality?

How much we take for granted every day! How blessed we are!