I woke this morning to the sound of rain. It was still dark. I did not immediately remember the small rug I had hung out over the back-deck railing last night because it had gotten wet from the leaking (unbeknownst-to-me-turned-off) freezer – it is surely wetter now. I did not remember the itty-bitty splinters in my hands from when the front porch was wet (and a bit icy) yesterday morning and I had slipped and caught myself by reaching for the rough cedar siding of the house. Instead my mind flashed to the chickens – dry in their coops now, but not for long!

Bedraggled is the best word for them when they have been standing in the rain, seemingly oblivious to it, for even a short while. I can provide them a palatial coop, I can make sure they have space under it to escape nasty weather, but I cannot keep them from getting wet.

Do you see the beginning of what was already a bad hair day starting to get worse? This photo, taken on another wet day back when the leaves were still green, shows the clumps and points and spikes beginning. In the rain, the silkie’s crown of fluffy feathers gets clumpier and clumpier, pointier and pointier, spikier and spikier and ultimately flatter and flatter. Hey, that’s my crown you’re talking about!

No offense, Missy, but there’s not a lot of brain in your fluffy head.

Then I opened my phone and saw Claudia’s thoughtful response to my recent Banishment-Harassment Conundrum post. Regarding what to do with Goldyneck, my black copper maran that unmercifully harasses the silkies in her coop, was banished therefrom and subsequently reunited with the smaller hens, Claudia wrote:

Great observation and great metaphor for social analysis. Analogies help us think, they unfold a truth and point out connecting and turning points. But at one point a chicken stays a chicken and a human being – convicted or not – is a human being with the ability to think, feel and change if that human being recognizes a need to change plus receives the needed support. That is the pedagogy and assumption in me. Chickens on the other hand follow their instincts. Goldyneck will be at the lowest level in her new society until someone newer and weaker than her joins. If you keep her at her new place much longer – guess what – I think she will be the new one again and start from the lowest position. Sociology. No logical thinking patterns in chickens, no rational thinking just instincts, NO empathy. That’s where the original analogy ends and where we need to look for a new one that helps us think further and put our findings into understanding. How about a heart: We as humans have the ability to feel and build emotions in various contexts. Chickens don’t have that part – they “feel” pain because of their neural system but they are missing the emotional heart.
Thank you for making us think!

To which I say:

On the contrary, my friend — you are the one making us think.

Any analogy we make (including the one I had made comparing chickens to humans) goes only so far. Always, always, let us remember that behind every statistic, behind every story, there are individuals who act in certain ways in part because they are genetically programmed that way (we breathe to get air into our bodies, we run from fire because we naturally self-preserve) and in part because it’s what we individually want (for dinner, say) or what we thought would be the best course of action (such as quitting a job or choosing a mate). The thinking part distinguishes us from our feathered friends.

Chickens lean heavily, almost exclusively, toward the actions that are genetically programmed (pick on the little guy to establish pecking order). The image of Goldyneck being excluded from the watermelon circle, 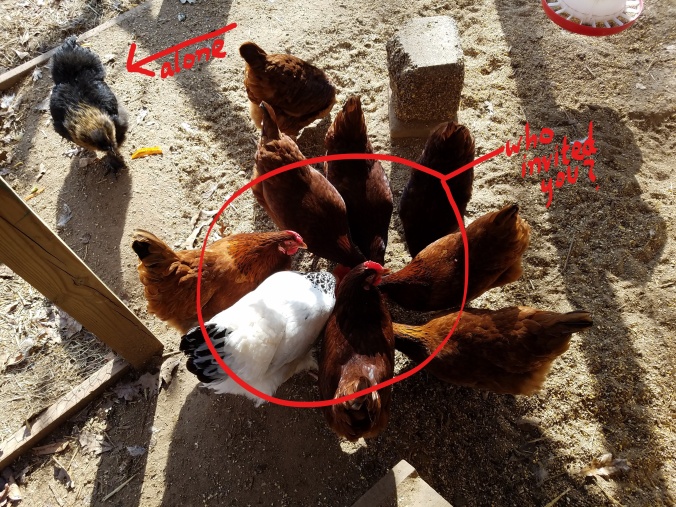 watching the others play out the who-invited-you? scenario, kept coming back to me, indeed weighed on me. In sixth grade – I remember it as if it were yesterday, there we were in the elementary school gym – as I myself attempted to merely stand with a small group of girls (I was not trying to share the watermelon!), those were the words I heard: “Who invited you?”

Unlike Goldy, who in her chicken-ness is alone but probably clueless as to why, I, being human, felt the pain of that exclusion. It reached my emotional heart and lodged there and over time turned into an understanding of human pecking order, as real as chicken pecking order, and a bristling within myself whenever I see anything that resembles this kind of behavior practiced maliciously.

But as emotionally challenging as my own experience was back then, my ability to reflect/think/reason kicked in regarding Goldyneck. She is never going to learn. And as Claudia so beautifully pointed out, all her relocation will accomplish is simply a different pecking order. Within hours of posting the first conundrum blog I came to this same conclusion, and I put Goldyneck back where she had started, with her Bridge Club, among her silkie girlfriends.

They’ll work it out, I said to myself. In their primitive way, the silkies will find a way to hold their own — as by extension, all of us who are deemed “lesser” somehow will do with whatever emotional and social capacities we have (or don’t have) naturally within us or (let us hope) we have developed over time. There will always be those who are bigger, stronger, more powerful, more strategically placed — and more bent on asserting such. It has never been otherwise, and never will be. We all simply do the best we can with what we have wherever we are. Or at least we should be trying to do the best we can. Regarding How to think and How to feel – let us never imagine that we have arrived at the pinnacle of either, but always know we have a ways to go in improving both.

Upon approaching the coop this morning as daylight increased and rain slackened, I observed the Bridge Club – the smaller chickens just waiting to be let out, curious about me on the other side of the wire. Goldyneck was among them, waiting too, curious too, behaving as you would hope, minding her own business. 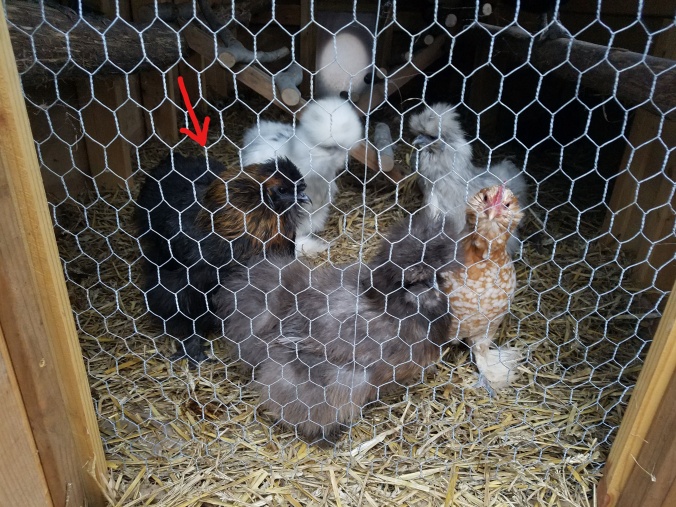 I went around to the other side and opened the egg door. She was the first one out, loaded with energy, scuttling around on her two funny feet. Then didn’t she find a silkie to peck!! She comes up from behind and grabs hold of the feathers on the back of the silkie and pulls a bit. For no apparent reason! This poor thing, the one we call Spot, was the harassed one this time, but she managed to distance herself and find a place of peace under the coop. (Do note her dry head at this time — they had emerged just minutes ago from the coop.)

The way of the world is not so nice sometimes, but she found her corner. We all find our corners. Goldyneck continued to traipse around the run, but for as long as I stayed out there refilling food and water, she didn’t bother any of her coop-mates again. Who knows what moves her to annoy the others? Who knows why she stops? There are some things you cannot know, some things to just leave alone (until she gets my dander up again!).

When I returned an hour later – after the rain had started up again, after the not-overly-bright birds had stood in it for a while, I saw the natural outcome of small brains + rainy weather. As Sandy so aptly remarked: Punk is alive and well 😊 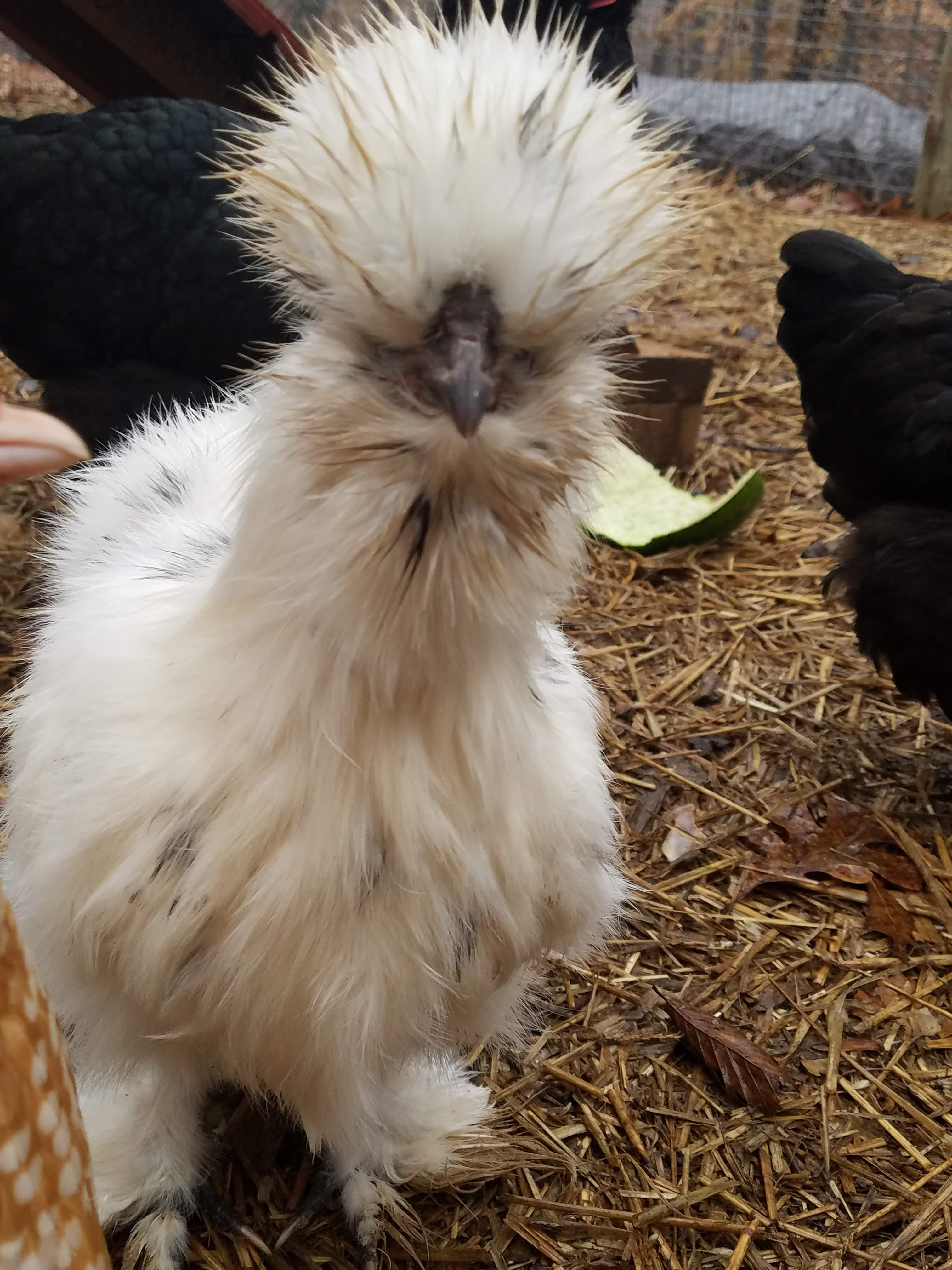 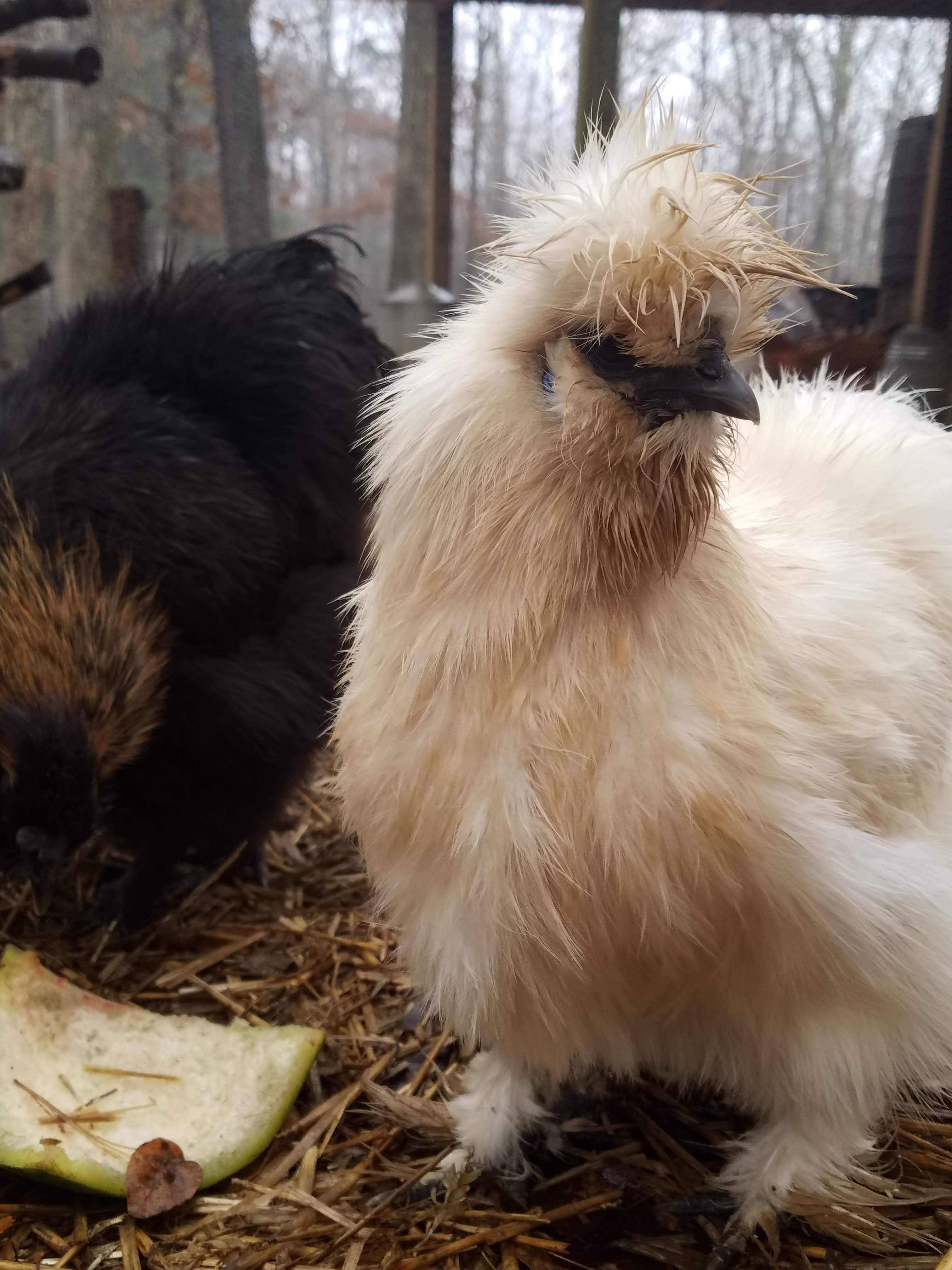 2 thoughts on “The Chicken Conundrum: Part 2”