For four years now I have been hosting Airbnb guests at the cottage that Bradley and Beth built on my property.

As a kid Bradley always loved to build things in the shop – I remember when he was a teenager and I prayed he would be careful with dangerous power equipment. He was, and he taught himself many aspects of carpentry that he later incorporated into the cottage, such as the coffered ceilings, cherry tongue-and-groove floors, all the custom-made windows,

and the beautiful railings in the loft.

During the building process, he and Beth worked tirelessly at full-time jobs and the work on the cottage. 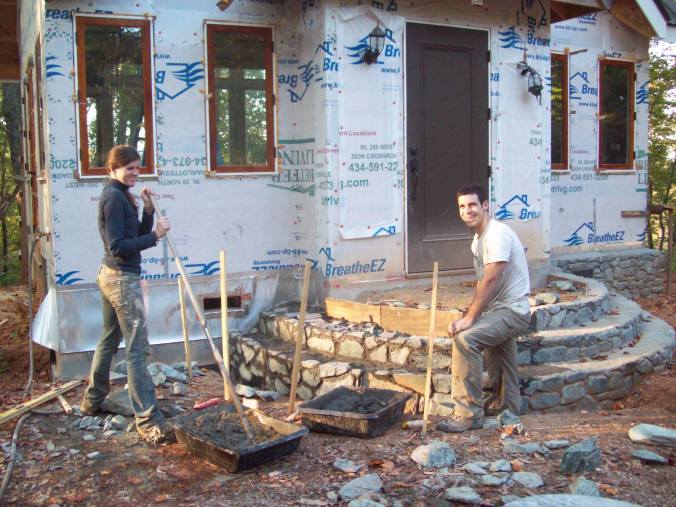 I worked too, but mainly many hours at my job at the hotel. I paid the bills, made food and talked through material and design decisions with them.

Here and there I contributed actual labor, but as anyone in their 50s knows, there is a big difference energy-wise in what you can do in your 50s compared to what you can do in your 20s. I marveled at their energy! I wanted to help! But plain and simple I was too tired, emotionally and physically, by the end of the day. It was their amazing project.

During a few of the cottage-building years, my son Lincoln and his wife Julia lived nearby. Lincoln worked at a woodworking shop in Richmond, honing the skills he himself had been developing. He and Bradley together built not only the original chicken coop, but also skillfully remade the base of my antique dining room table using solid mahogany – they designed and built graceful, perfect legs and gave new life to a family heirloom.

If I had been more present during those years, how much I could have learned from them both! I remember thinking this, remember admiring them, remember longing to work alongside, remember sitting exhausted in a chair…

Lincoln and Julia moved to Vermont in 2013 and Brad and Beth left for Seattle in August of 2014. The decision to try hosting through Airbnb, to “share” this gem of a cottage with others who might appreciate it, seemed reasonable. It took till early October 2014 to get everything ready, but from the get-go, literally within hours of posting the details of my cottage on their site, I had my first guests, and it has been great guns ever since. For two years I managed both the cottage and my job at the hotel (a bit of a juggling act). Then in a good-sized leap of faith in October 2016, hoping that I could get by with just the cottage, I resigned my position at the hotel.

Now I have time and energy for building things! Or unbuilding things, as the case may be. Sandy handed me the drill and up I went on the roof of the old chicken coop run to unscrew the metal panels in order to clean them and put them back on a rebuilt frame.

Filling holes with concrete? I can do this.

I can also dig out earth to make a level place for a deck to connect the old and new chicken coops. 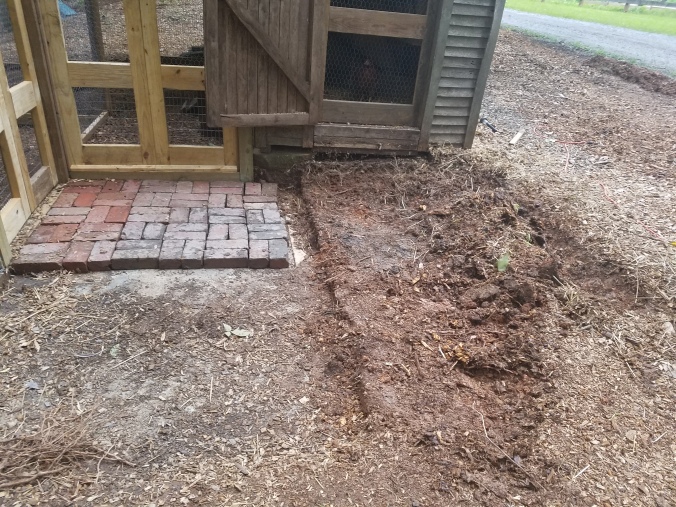 And build the coop deck’s framework with scrap 4x4s and 4x6s in rows to support the decking boards.

I worked with my Uncle Ernie to make a bench for that deck, getting a little more comfortable with the chop saw. I still don’t like using the table saw. 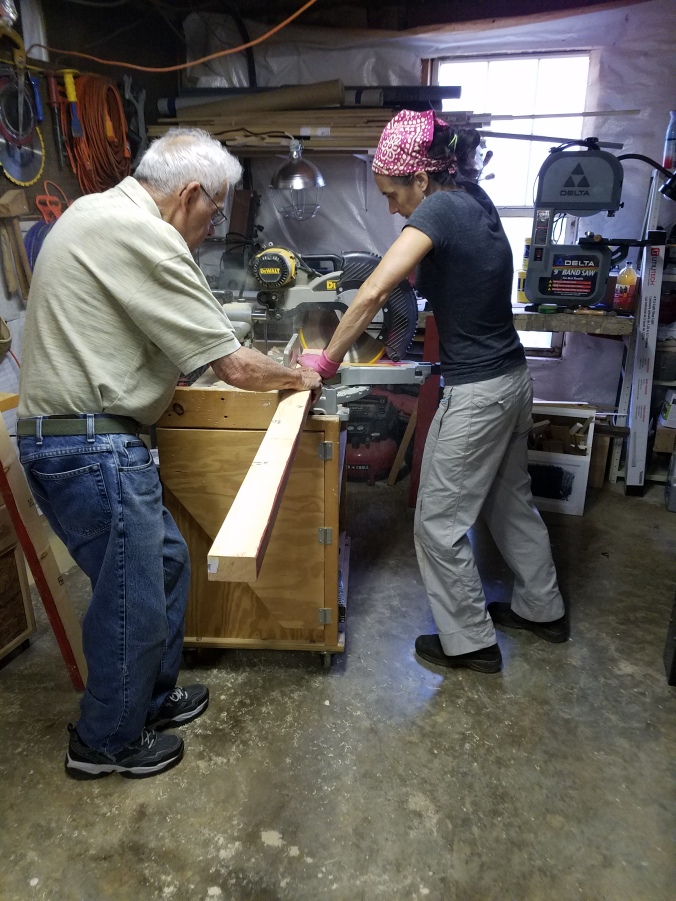 And once that all was finished (and huge thanks to Sandy for doing the lion’s share of the work) — oh, how beautiful it looks to me on this rainy November morning — 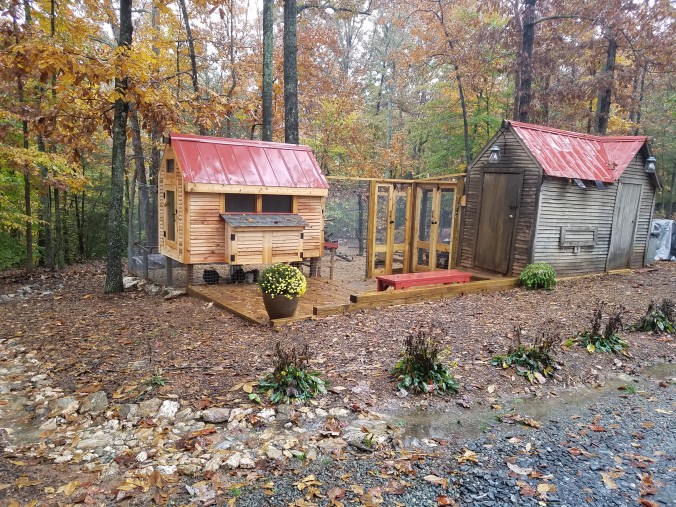 we turned our attention to the house foundation

and front porch project. I’m the grunt labor, I know this. Sandy is the energizer bunny, working for endless hours, bringing skill and ideas, and has way more confidence in my capabilities than I do. And Joe and Samuel have been invaluable in this getting so much of this work done so quickly.

A few years ago, I assure you I did not envision myself nailing in joist hangers!

What happened? Yes, I now have more time, and yes, I am not so sapped of energy as in the past. But there is something else. Actually two somethings. 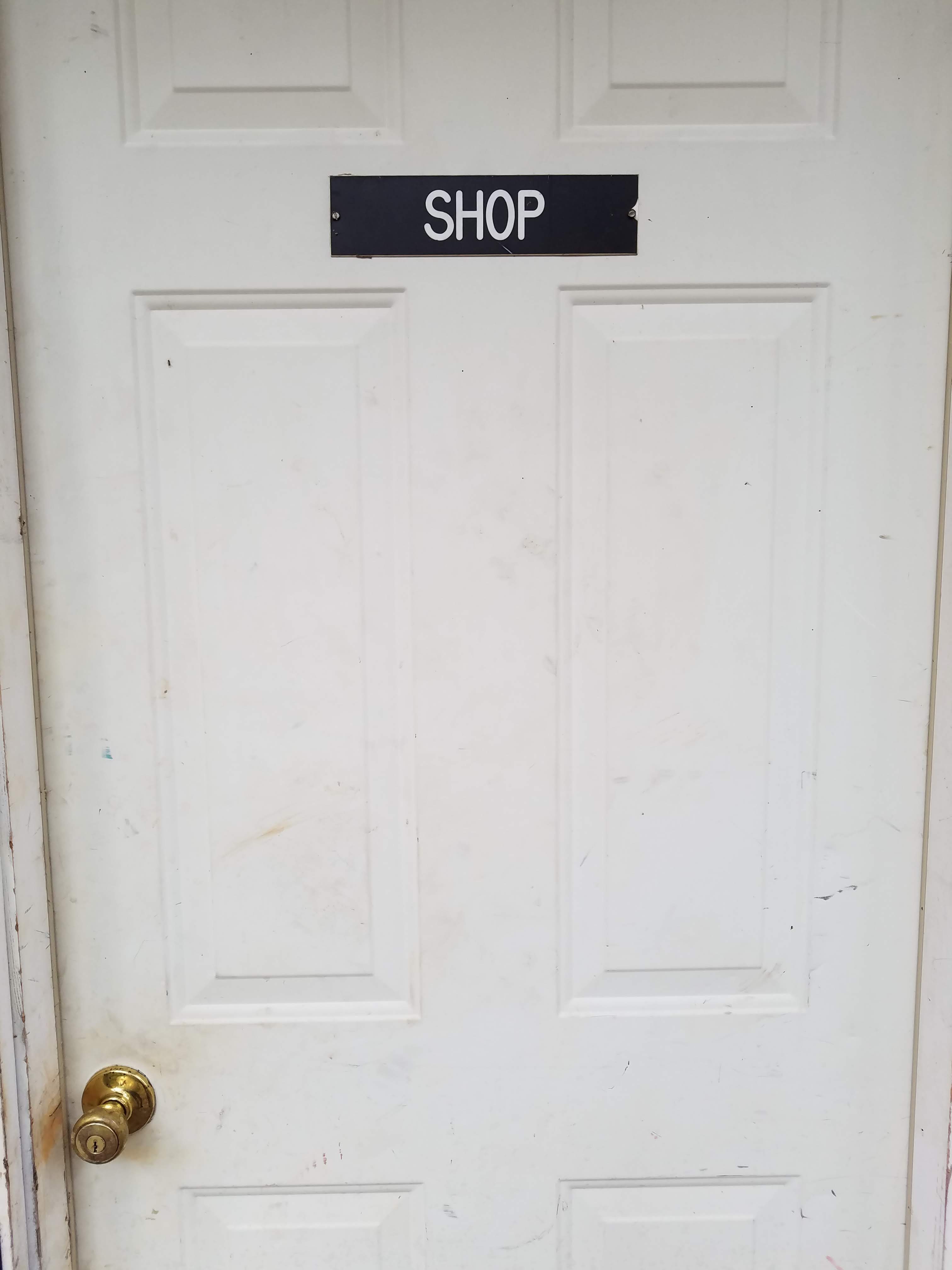 2. I was always intrigued by the concept that you are never too old to learn something new. Back in the homeschooling days, I read a lot of John Holt’s work. I paraphrase here a story he told of someone who wanted to learn to play the violin but was 50 years old. “I’ll be 55 by the time I can play it decently,” the person said. “Yes,” he replied, “but in five years you’ll be 55 anyway, so wouldn’t it be better to have learned to play the violin during those years?”

In five years you’ll be 55 anyway.

That phrase stuck with me. I stretched it to not only:

I’m x-years old now. I want to learn [pick a skill]. In five years I’ll be x+5 years old anyway. Wouldn’t it be better to have learned that skill in those five years – even if not to the master level – than to get to x+5 years old and still be wishing I could do that thing?

I’m x-years old now. I struggle with [pick a subject]. In five years I’ll be x+5 years old anyway. Wouldn’t it be better to find a way to make some strides in that area in those five years than to get to x+5 years old and still be struggling in the same way with that thing?

So here I am, cutting decking boards on a chop saw, knowing the difference between a rim joist and a sill plate and a ledger board, toenailing deck joists in place to hold them until it’s time to screw in the hangers. In a conversation with my son Lincoln the other day, he said, “It’s very cool to see you learning how accessible and simple all this building stuff is. Not just some magic that you have to ask some pro woodworker to do every time. Measure, mark, cut, secure, repeat!” I told him I have my limitations: I am not very strong and I am scared of some of the equipment. He said, “Well you should be scared of those tools! Every safe woodworker is.”

Today I am grateful for all the people I’ve known who have woodworking skills, all the encouragement I’ve received from people I love (in ways they are probably not aware of) and all the enthusiasm of friends and family who cheer on these projects. All of this has developed in me a greater interest in the craft and a hunger to learn more. One of these days I might do more than the grunt work, but if I don’t, that’s okay. I’m having fun and there’s a wonderful result!

Here we are now, with temporary steps on the side! For the first time in almost a month, we can go in and out through the front door 😊