Don’t get the wrong idea. Don’t read the title of this post and think I’m feeling spry and am going to tell you how a good diet and a consistent and sensible exercise routine have long term health benefits. They do, but “old timbers well aged” does not refer to me!

In our early days on this property, we had to take down trees. I hated it. Perfectly fine trees they were, but in the wrong place or just plain too many of them. I could hardly watch. After the deed was done though, Bradley used an attachment for his chain saw  called an Alaskan saw mill. With it he milled the logs into usable lumber. In the photo below you see two tents. The one on the right, down the hill a bit, was filled with usable lumber milled right here at Golden Hill. (The one on the left still stands, still houses firewood.)

Among the stacks of wood were some larger oak timbers, the center sections of felled trees that ended up about 10” x 10” x 12’. Some of these were milled to make the clapboards that sided the original chicken coop that my sons Bradley and Lincoln built. 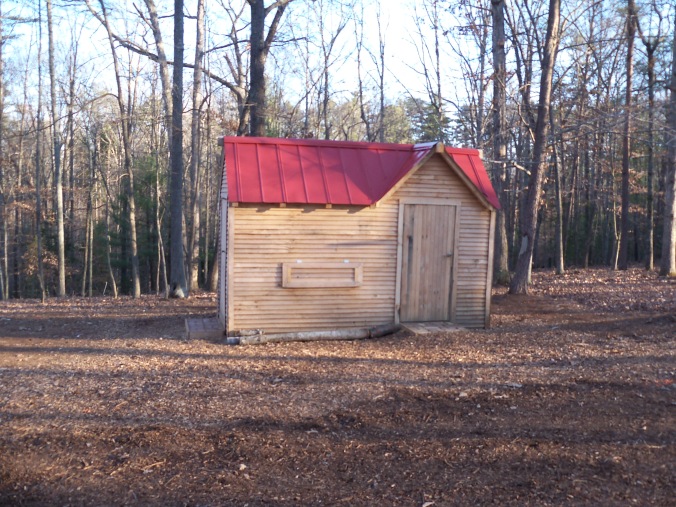 The rest sat under the tent, unneeded. Frankly, forgotten. Other things become more important (you know how that goes). But sometimes it’s a good thing to forget something. Sometimes, things need to age. This past spring, when building the new coop, I thought about its siding.

The T-111 all by itself (already skinning some sections of Coop #2 in progress) might have been ok if Coop #2 was not sitting next to Coop #1 with its rustic, oak clapboard look. We planned to use the same red metal roofing material, so that would coordinate, but the siding was in question. Obviously, rough cut oak clapboards would be best, where was I going to get them? (I completely forgot I had those oak timbers!) I rejected the T-111 because no matter how we might stain it, it would still look inferior and incongruent. I looked into cedar shakes, thinking they might complement the oak of Coop #1 nicely, but oh, no – really expensive.

It was one of those bumps in the road that (in part because of your failing memory) you can’t see to the other side of. All this effort — yes, I know, a considerable bit of effort for chickens! — and no idea how to side the coop. Thankfully, there was enough else to do, and I back-burnered this problem. Clearly there is always enough else to do around here!

That tent that houses the firewood, pictured earlier, also houses other things that don’t fit elsewhere but need to stay reasonably dry. (There is no proper barn or storage building here.) The lawn mower, ladders, straw bales, extra garden fencing, stakes and – OH! What’s that wood under that pile?? God bless my boys!

It’s one thing to have the right timbers. It’s quite another to have them cut down to the right size. I went to a local mill to see if they could help me. No, they don’t mill other people’s wood. I guess I can see that. What if there was a nail or something worse stuck in the wood? Much as I wished I could have clapboards made from these timbers, I felt discouraged. If this mill wouldn’t do it, what made me think another one would? I was lamenting this to my neighbor Tracy, who immediately and casually said she knew someone who could do it.

Tracy knew a guy. His name is Chris, and he was very happy to turn those timbers into clapboards just like the ones on Coop #1. He came, took them and milled them into rough pieces about 3” x 1/2“ x however-long-they-ended-up – all for a very good price. Chris said that if the timbers had not sat for six years, the wood would have too much moisture in it and would warp more and shrink more, and you don’t want that. See? It’s good I forgot all about them! It’s good I found them again!

The past two weeks, while waiting for the rain to stop so we could proceed with Big Dig Part Two, it seemed like a good idea to get the rest of those clapboards up. One afternoon I put up long pieces along the back of the coop. Their imperfections are so perfect. You see how some are darker than others. Some have knots. As more went up, as if I didn’t like it a lot in the first place, I liked it better and better. You are welcome to disagree, but I do think the clapboards beat the T-111 by a long shot.

At the bottom, where you see those rope handles, a horizontal, red flap of a door will go. 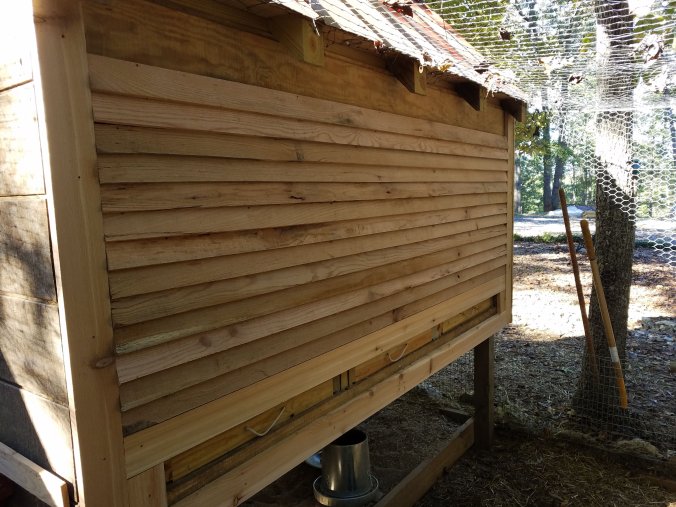 One thing at a time here, working our way around. The side with the egg door is special and needed special framing. This is silly Coco a few months ago. Someone (can’t imagine who) put her inside the coop. Hey, do something. I’m stuck. 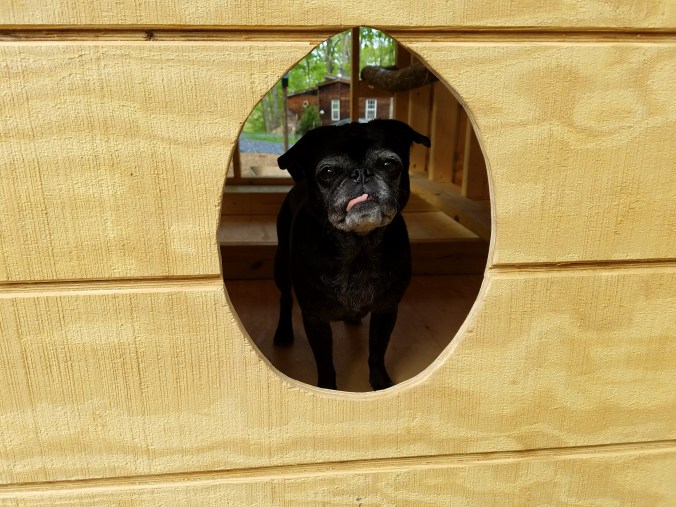 Joe showed me how to use the band saw to cut the pieces to frame it out after I’d enlarged a template I found online.

It framed out the egg door nicely. Do you think anyone else but me cares about this?

The weather was good, so I kept going. First the cedar upright along the right, then one along the bottom, then the oak clapboards.

It was tricky working around the netting that forms a ceiling over the run to keep owls and hawks away from my Bridge Club. But with a lot of help from Sandy doing all the trim pieces, it’s (nearly) finished, and I love it! Chickens never had it so good, it’s true.

It still needs a ramp so the chickens can get up into the coop, which you may be glad to know they are now sleeping in on a regular basis! They are going in on their own at night! With no help! Okay, most of the time. Okay, with some help sometimes still, but mostly they have the idea. A new ramp would make it easier for the silkies. We want to make it easier for them. Who wouldn’t?

Sandy dressed up the front with a fascia board right — that horizontal piece just below where the roof ends. This is without it, earlier this week.

This is with it. See the difference?

I’m not a builder. I’ve watched things being built many times, but never — before this chicken coop project — felt comfortable with the chop saw or the few other tools I had to use. There are many mistakes, many places where the cut could be better or the gap between boards a little tighter. And I’m still not comfortable when the piece is too small or the cut anything but straightforward. But it seems to me that a chicken coop is a good way to get your feet wet because when something is not perfect you can say, “It’s a chicken coop!” And not worry about it.

Also remember, next time you think nothing is happening, think again. Something is aging, waiting, getting better with time. The oak timbers needed to sit in a quiet, out of the way place for years. There they were under the tent, truly forgotten, doing their thing, releasing their moisture little by little, waiting for their day. Old timbers well aged turned out to be the icing on the cake!