Expecting the worst sounds so pessimistic, but it has its upside. If and when the thing comes to pass and is not as bad as you expected, you can be pleasantly surprised and a great deal relieved – positive emotions both, and most welcome. The truth of the matter is: Some things are wonderfully and surprisingly simple, uncomplicated, straightforward.

At my house right now is both work and mess. But I expected more work and worse mess. Truly I am grateful. For seven years I have been thinking I had a problem. Here’s why.

In my house is a funky circular staircase that leads to the basement. The wall in that stairwell that faces the front foundation of the house has been, shall we say, compromised. That’s what that crack is, a compromised wall. Clearly something has been pushing at it from the other side. 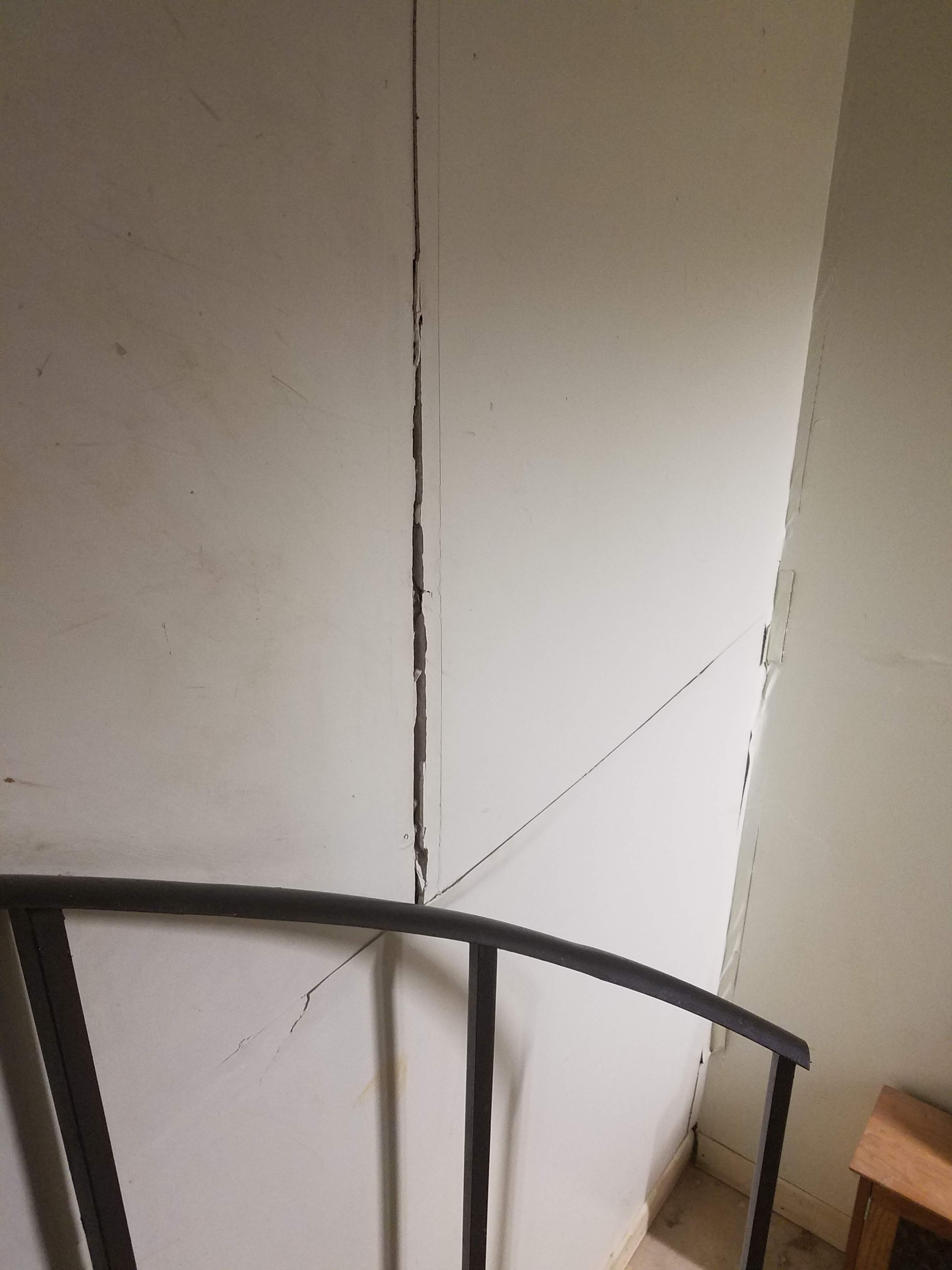 You can see that the sheetrock has separated along its seam and is pushing inward. It has been that way for seven years. Part of the reason for this problem, we assumed, is that on the other side of this interior wall is an exterior wall made of plywood. Yes, plywood.

In the late seventies, when this house was constructed, they thought a plywood foundation wall was a good idea. A few years later the company went out of business but that is water over the dam for me. I bought the house with the plywood foundation. Over the years I have had both architects and structural engineers tell me it was sound and solid, and I wanted to believe them, but I see that crack every time I go downstairs. Not good, I tell myself, that cannot be good.

I might have watched it a few more years, hoping it’s not a disgusting mess behind that wall just waiting for the tipping point of enough water pressure + enough rot. The land slopes toward the house, so imagine the pressure of all that earth – especially when it’s soaked with rainwater – against my wood foundation. I envisioned a muddy mess busting through some rainy night when numerous other problems were also on my plate and of course, when this happened, I would be here alone. Can you see the creepy creatures that might accompany the burst? Yick!

The work and the mess that are here now might not be as bad as I expected, and I know there are worse things on earth than giant wolf spiders. But encountering them is still a near-death experience for me. (You do NOT want a picture of these, trust me! You will have to use your own very capable imagination.) I had to deal with one this morning and my heart is still beating too fast. It was on the inside of the screen door of the sliding door, which was inside the house, meaning there was no way to get it outside, and no way to sleep at night without killing it.

The spray that kills hornets was standing nearby. If it kills hornets, it will kill a spider, right? I figured I’d spray through the screen right at it. What part of my brain thought that would kill it immediately, I don’t know, but the thing did not roll over and die. It moved! And they move fast. I kept spraying, making a line of spray on the little red rug that, until this morning, occupied that part of the floor. It got as far as the small wooden cabinet in the corner, and I went to step on it (though you have to know I could hardly look at the thing).

What I saw when I lifted my slippered foot was just a bit of ick. No mashed spider. That’s very bad. Where did it go? If I missed it crawl under the cabinet, I’m in big trouble. I looked. I didn’t want to see it. But I needed to. I didn’t see it. I looked around some more. Oh.

That seems to be a bit of leg sticking out from under the red rug. It took refuge under there, clearly not realizing it was not altogether hidden. Probably it was delirious from the poison, probably would just die, and soon, from all that stuff I sprayed on it. But I couldn’t take the chance. I had to step on it. I had to hear the sound. I did. I had to. When it was done I could know it was done and I would once again be safe.

Didn’t I just write yesterday about your home being a place where you feel safe?!

My heart was beating like mad by this time, but I’m finished. There was no more in me. I sat. I waited for Samuel to wake up. Finally he did. I asked him to please clean up the mashed spider from the underside of the rug. He is a wonderful son who just smiled and got a tissue and did the thing. Then I decided that the rug, with its ribbon of poison spray, is probably trash now because what if Coco’s tongue, the one that doesn’t fit in her mouth, happened to touch the poison? Yup, trash.

See what an exhausting time I had?

One time, when I first moved here, there was one of these creatures on the outside of my bathroom window screen. When I told a colleague that day at work about that near-death experience, she calmly said to me, “You live in the woods. That’s their territory.” She had zero sympathy. Zero. I have never forgotten it.

All right, I confess. It’s not just the image of muddy slime oozing into my basement along with all manner of slitherers and crawlies that forced this repair. (You KNOW there would be an army of those things coming through!) It’s also the money. In the end I care about the money. I want a new front porch. I know this old one doesn’t look that bad. 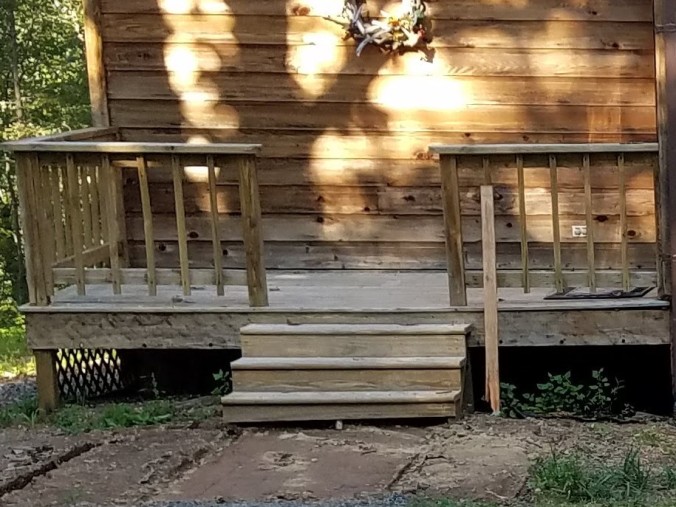 But it is. Its rotting boards would probably hold up a little bit yet, but it’s fair to say that wanting a new front porch was turning into needing a new front porch. So if I need to spend money on a new front porch, it makes sense to fix what would be henceforth unreachable under that new porch before building said new porch. Imagine not fixing the problem, ignoring the problem, moving forward in hope that there is no problem, and then finding out that there is in fact a problem after investing a lot of work and money in something that renders that problem unfixable without investing more work and money.

As much as I wish that stairwell wall was flat and perfect, it isn’t. It’s mine. I own it. Buck up. Fix the foundation.

On Saturday the excavator was here. That night at almost 11pm, my plane landed and Samuel picked me up at the airport. We talked till 3am. I woke at 730, went outside, and saw the piles of dirt. 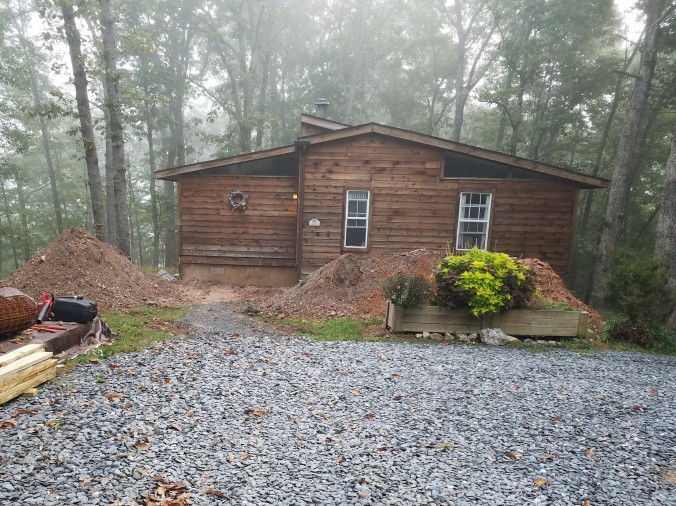 Like I said, I came home to work and mess. But I love it. Despite the downside.

Tomorrow, when I have truly recovered from my near-death experience, I will explain where the piles went and how we fixed the wall. At the moment I am still exhausted!

2 thoughts on “Work, Mess and One Terrifying Spider”