I am not in Virginia. I am so far afield in fact that yesterday I asked myself What planet am I on? The observation causing this question occurred on the streets of Berkeley as my son Drew and I walked toward his office. This little cooler-on-wheels caught my eye.

I was so fixated on the cooler – which was not sitting still but moving right along, making its way on the sidewalk just like the rest of us – that I didn’t include in the photo the man who was walking sort of behind it. I assumed he was directing it by remote control. Drew said no, nonchalantly, that it was a robot delivering smoothies. A what?

The robot continued along the sidewalk, passing the homeless person sleeping in the blue blanket,

bumping along on its own until we reached the door of Drew’s office and, again nonchalantly (as if such a thing is not supposed to faze you!), carried on. Turns out — when you dig a little deeper, look a little closer — it’s called a Kiwibot, delivers food from various local restaurants including Jamba Juice and Chipotle, and by the end of May of this year had delivered its 10,000th meal. Okay!

You know you are going to see new things when you travel, but I did not anticipate a robot delivering food. A beautiful tree, on the other hand, a beautiful tree I am not necessarily surprised to see. Nicole, Drew’s fiancée, says trees are a thing white people see (she being of Chinese heritage herself). White people know trees, flowers, birds, she says. I don’t know about this, having only in the past few years learned the difference between a white oak and a chestnut oak. But I do not deny that I am drawn to beautiful trees.

I had some time, so I walked up to the University of California campus, also simply known as Berkeley. It’s a hilly area with lush green grass, the kind that feels like there is a spongy pad underneath it, which is to say the polar opposite of the grass at my house which, on account of the hard pack clay, feels like there must be concrete under those few surviving blades.

This photo gives you an idea of both the spongy grass and the magnificent eucalyptus tree that stood in the middle of the campus.

I got up close to it, of course, because who wouldn’t? Look at this trunk. 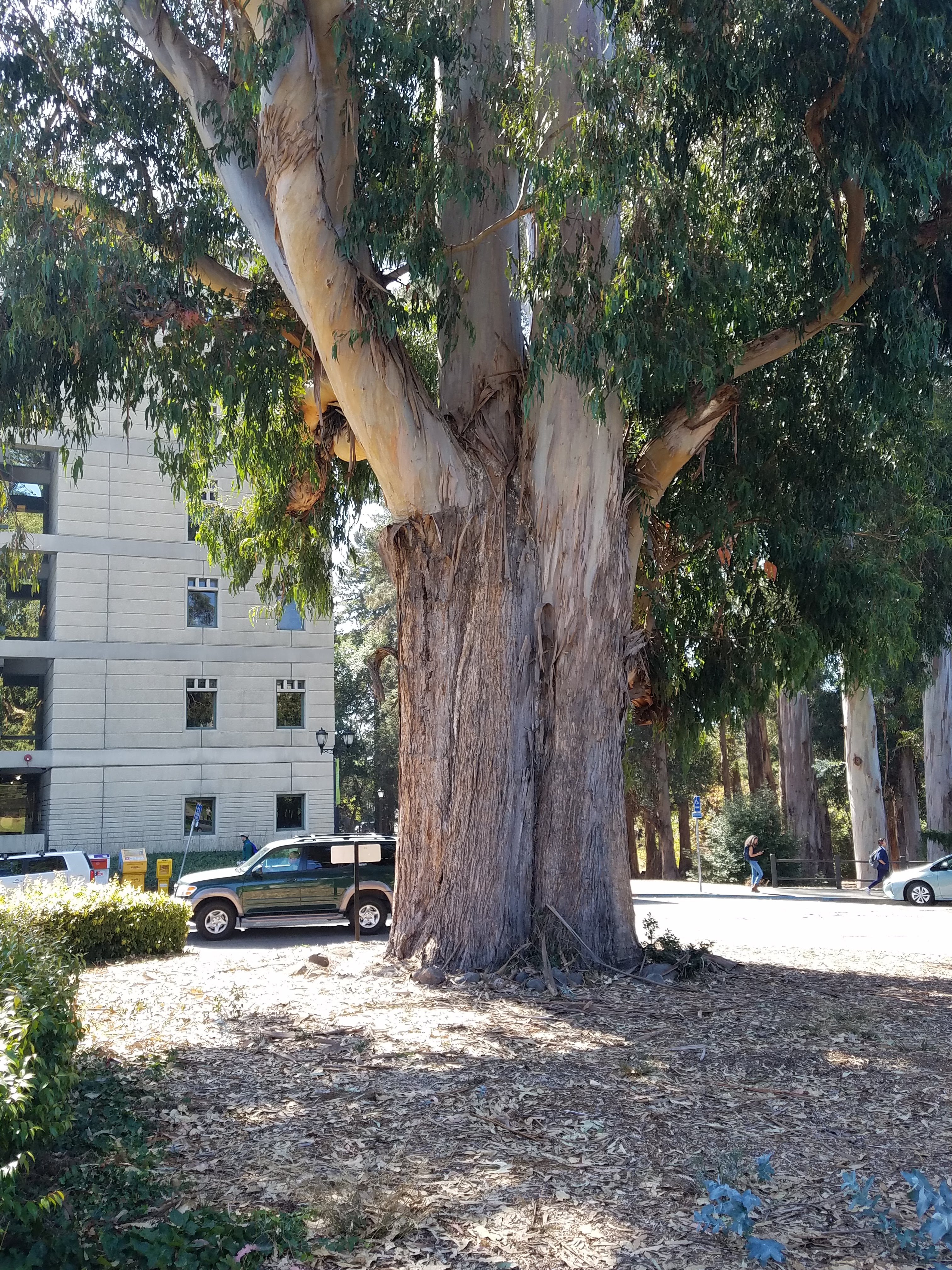 I got a little closer, to observe the intricacies of its texture 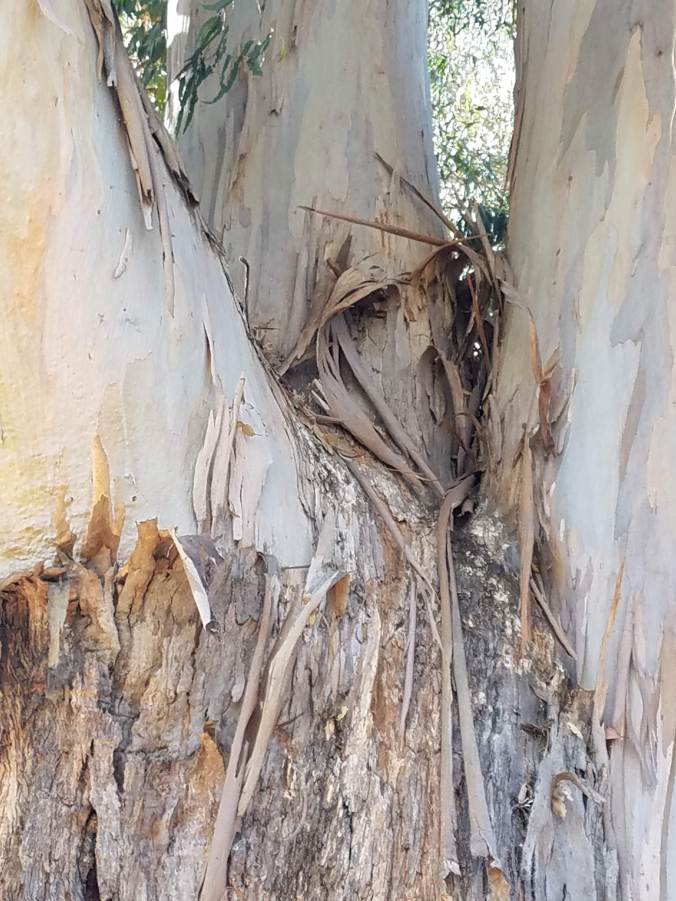 its bark. Artwork is all around us. We just have to look. Who is the artist? You decide. 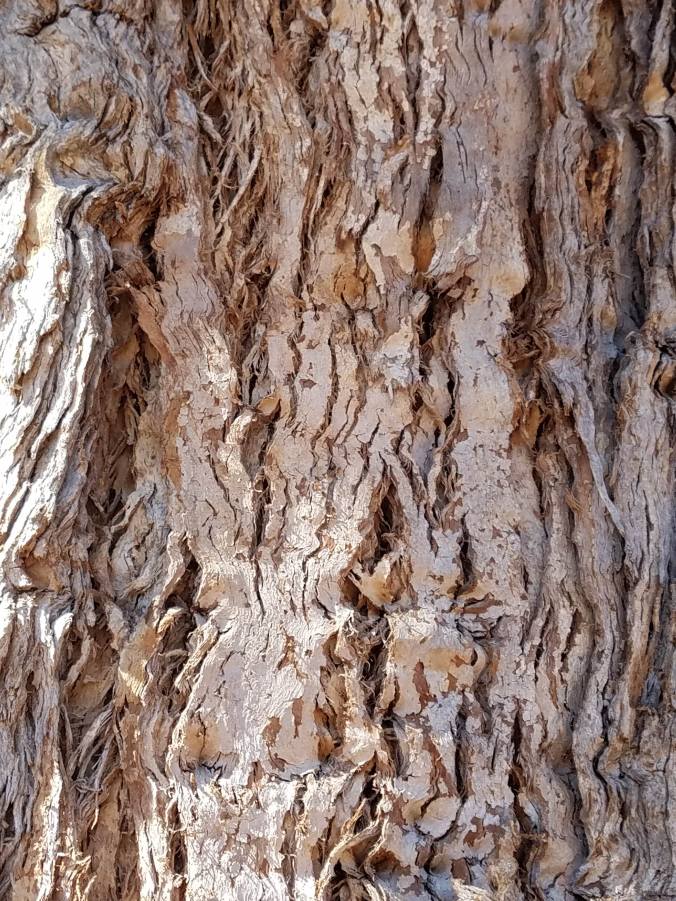 If a human had created this, it would be hanging in a museum somewhere. But no. Leave it to humans to create a controversy about this tree and the grove behind it. I looked a little closer into the problem. How could such beautiful trees be a problem?

They might be a fire hazard, you see. A few years ago, $4.6 million in federal grant money was awarded to help “thin” this area of “hazardous” trees, a prospect that inflamed (pun intended) some locals enough that they tied themselves naked to the trees in protest. (You may look that up on your own.)

There’s always more to everything, right? Later, as I walked the streets again (no robots this time), I saw this in the pavement. 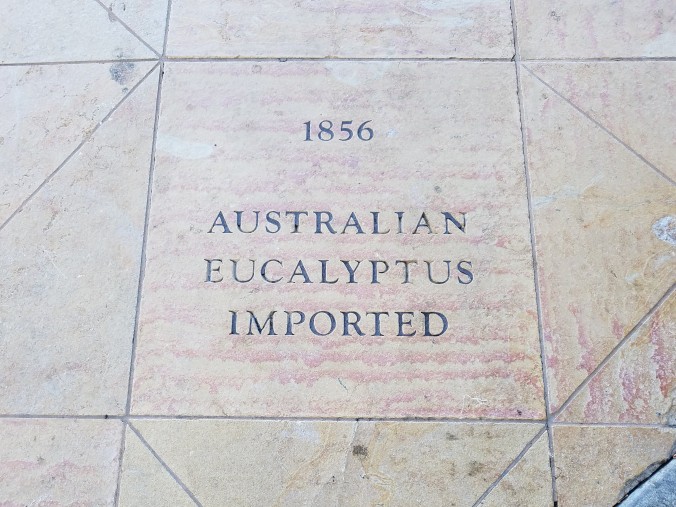 Some well meaning botanist brought them here in 1856 apparently. I looked that up too. Again, the more you look, the more you see. Was it really 1856? This page from a 1935 journal of the California Botanical Society casts doubt.

I don’t know, and I don’t want to split hairs about it. I just got this overriding sense yesterday of the complexity of the world, of how everything – a business that uses robots to deliver food, a beautiful tree, a detail of historical fact – everything has more to it than you initially see. Get a little closer to this shrub, look carefully just to the left of that taller plant in the middle,

and you find berries hiding in it.

How did they get there? Are they renegade berries, holdouts from seeds that dropped long ago, insisted on growing into this other plant, refused to be eradicated altogether by diligent gardeners who have tried time and again to get rid of the little free-riders? Damn berries, the gardener probably says to himself, there they are again!

Look a little closer at this shrub

and see the delicate flowers that the Berkeley students walk past all the time and for the most part, I guess, hardly notice. The blossoms come, the blossoms go, who sees? Still they make their own beauty and bask in the sunlight.

This thing looks like a weed. Maybe it is?

But get a little closer and you might be looking at a different plant altogether. The patterning of its spikes takes on an artsy look, and the stems emanate from the center with gorgeous proportion.

What else is new in Berkeley (and likely elsewhere)? New but also not new? A new twist on an old idea? 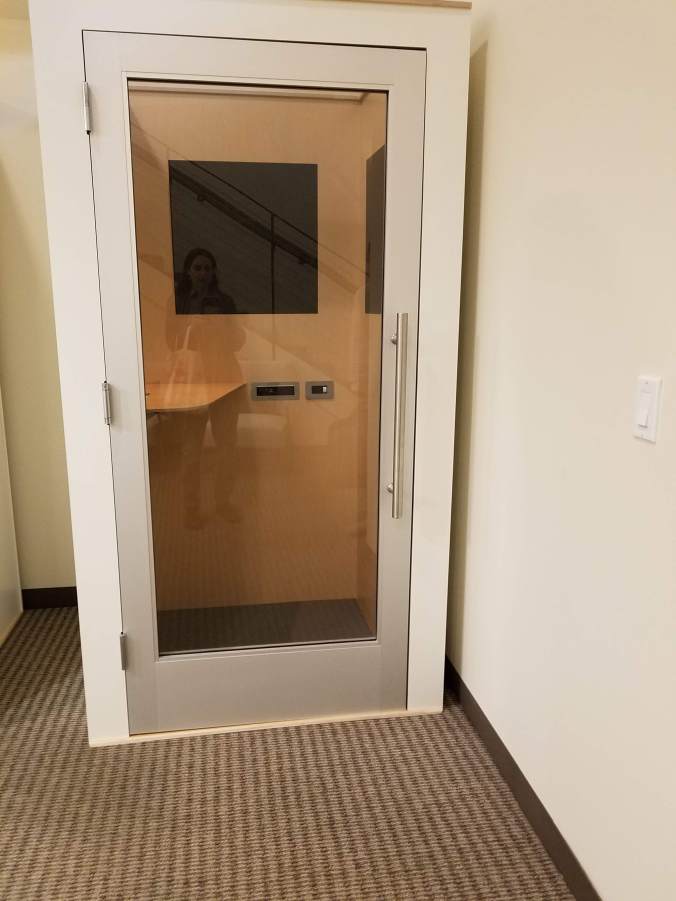 I loved seeing Drew in his office, hearing about the good work they do helping veterans find optimal employment following their release from service, sensing the passion he brings to their mission (shift.org). 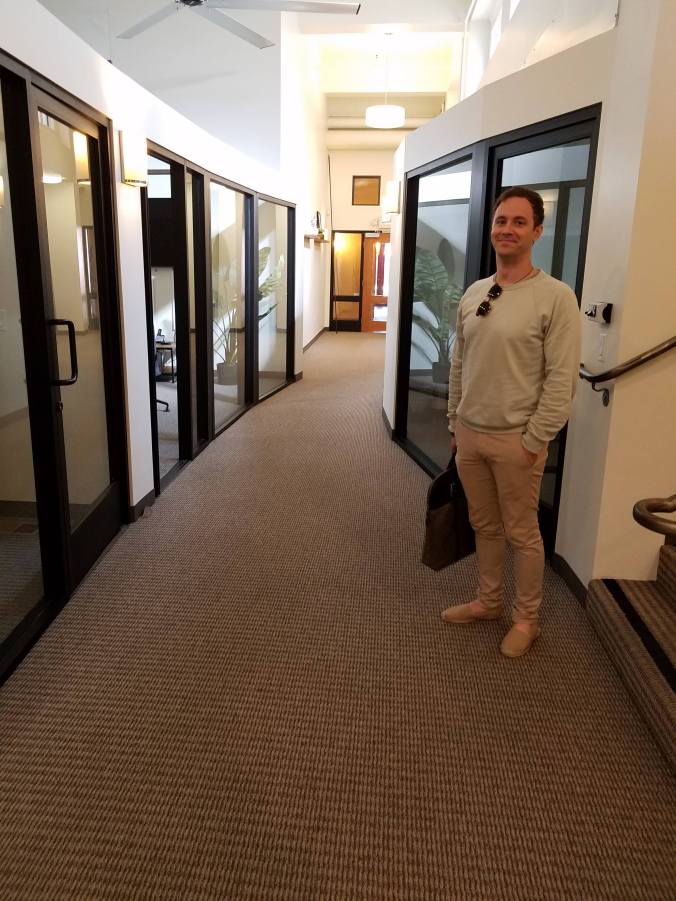 They do it because the founders saw a need, looked at it carefully, then developed an idea that makes the transition process for veterans smoother and more successful. Bravo to them!

When you look a little closer, the world shows you something new.