It is usually not the best idea to give someone a puppy. That didn’t stop me and my sisters eight years ago from giving my dad the cutest little black pug you ever saw. 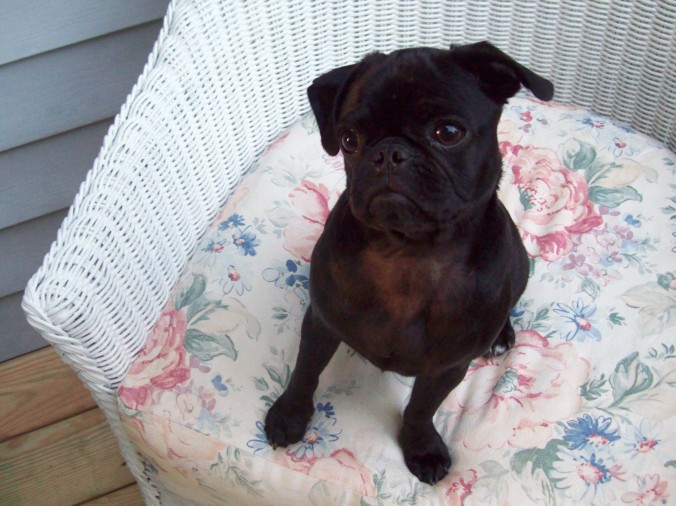 Why a pug? Growing up, we had always had German shepherds, beautiful, loyal, trainable dogs. First we had Jesse, then Adam. When Mom and Dad got a pug some years later, we thought they had gone foo-foo, but of course that was their prerogative. Foo-foo is an option. Daphne entertained them for many years. They loved her. They enjoyed her. Then she died and they said, That’s it, no more dogs.

A few years went by. Dad’s 75th birthday was approaching. One of us had the brilliant idea to give him a puppy, a pug again since they had loved Daphne so much, but a black pug this time. In retrospect I am not exactly sure how we justified this, since it is, I repeat, usually not the best idea to give someone a puppy. I think we said, Ah well, if he really doesn’t want her, one of us will take her. Not overly risky. We are not big risk-takers.

The little black pug was born in Virginia. It’s a 7+ hour drive from my home to where Mom and Dad lived in New Jersey, and at the time I had a job with crazy weekend hours. It was hard to find a time to drive up there to present her, which of course had to be a surprise. So this sweet puppy stayed with us for a few weeks. She was a neck-nuzzler. Fur like velvet. Puppy adorableness. How could he not like this gift? 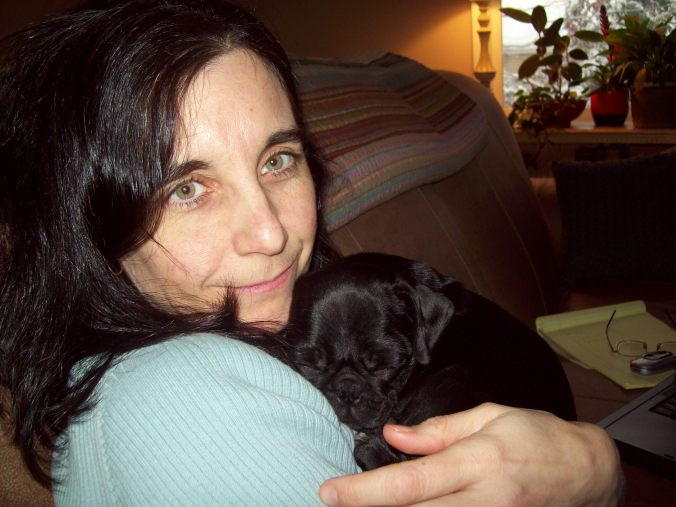 We finally arranged a time to visit, in no way hinting that we were bringing a life-changing animal. Samuel, still a teenager then, held her as we walked through the front door and greeted two very surprised people. Not only surprised, but resistant.

Dad’s exact (deadpan) words were, “You have got to be kidding.”

But she won him over quickly. Within 24 hours you couldn’t have taken that dog from him for anything (and whew! the plan worked!). They named her Coco after Coco Chanel. It warmed our hearts to see him cuddling with her and whispering silly nothings to her, though Mom had a little trouble with the new order of things. For her it was a Hey, remember me? situation. Wife of 50-some years, the one who takes care of you, the one who’s been here all along? But she let it be. His little schmoozer, his little gizmo was almost always curled up on his lap, scrunched between him and the arm of his chair, parked at his feet on the ottoman or sprawled across his chest with her head tucked into his neck. If she was not bodily next to him, she either 1. needed to go out or 2. had to be hungry.

My sister Lynn remembers that if Coco sat in front of him and stared unblinkingly at him while he was in front of the television, he would say, “She has to go out. Can someone take her out?” He said this even if she had been out five minutes before! Sometimes he himself took her out. It was hilarious to see him carrying the doggie poop bag dispenser on his wrist like a little purse. Only for this dog would he have done such a thing!

My sister Joanne remembers taking Coco out one dark night, getting no farther than the driveway and hearing a growl which very well could have been a bear (not uncommon there) so she hightailed it back into the house. When she breathlessly explained what happened, she soon realized that Dad was not the least bit concerned that his firstborn daughter might have been mauled by a bear, but much more concerned that his little doggie might have met her demise. Is she ok? Is she ok?

He held her on his lap at the table while he ate. He fed her off his own fork! It didn’t even matter if friends were there. Lynn’s friend Tracy witnessed this off-the-fork thing too. Dad made sure Coco ate at 4:00pm on the dot because, I mean, look, anyone can see that dog is starving. That 22-pound dog! The vet was always telling them to put her on a diet. Mom tried, really she did, but she couldn’t stop Dad from giving her morsels of his own food or chips or peanuts or whatever snack he had at night.

This is the same man who trained our German shepherds to stay out of the dining room and living room (because those rooms had the good carpeting) and to stay in the yard without our having an electric fence. God help them if they crossed a paw over the line! Dad was an excellent trainer. He just didn’t apply it to Coco. And you know what happens when you let a dog get anything it wants. She quickly became a brat. Mom called her Brat-dog all the time. Dad didn’t care. He loved her just the way she was.

In this family photo taken three or four years ago, you can see who is closest to his heart. Let no one come between man and dog! 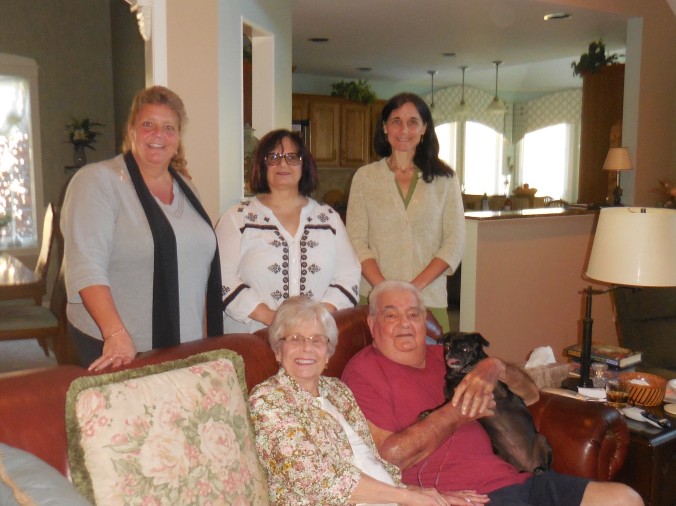 And no one did. She was with him till the end. After Dad passed away in February 2016, Mom preferred not to have to worry about walking Coco in the snow. Joanne was willing to take her to her home in Arizona. But Samuel wanted her. He had had a special attachment to her since she was a puppy. And because of him, only because of him, she is not a brat anymore! Coco’s transformation began in Burlington, Vermont. I said transformation and I mean transformation.

First of all, poor little baby who didn’t want to get her paws cold in the snow, sorry, this is Vermont in February and the ground is frozen. And she had to go out in the very early morning because his job started at 6am. Also her whole Oh listen, other people in the house are up, surely it’s time to get up – not a chance.  She learned to get up on Samuel’s timetable, not her own. She learned to sleep in her own bed. She went on walks measured in miles, not in how many houses you walked past. The extra poundage, the table scraps, the continual treats – those days are over, little girl. He put her on a steady diet of high grade dog food, makes her wait for her dinner until after he has had his (and it doesn’t matter what time that is), makes her sit and wait until he says “okay” before she can go to her bowl and eat, reduced the treat frequency to “occasional” and got her down to a swole 16 pounds. (I just learned that word. Swole is the new buff.)

Interestingly, in an age when mixed breeds are often in need of homes and it is a point of pride to have adopted one (and bravo to all those who do that!), Samuel felt looked down upon as he walked this purebred through the streets of Burlington. I told him to consider her a rescue and never mind about those stares. Mom didn’t want her, and even though Joanne was willing to take her, he is the one who gladly opened his heart and his home to her. I think she knows this somehow.

Oh, the bond they share. She snuggles down in the chair with him when he’s reading. She stays out on the deck with him when he’s doing his yoga. For three months of this year, Samuel was away and Coco stayed with me. Every night, to get her to come into my room (where her bed was) at bedtime, I had to pick her up and carry her in. Her bed is in his room now, as it was before he left. He just calls “Coco!” when he wants her to come to his room at night. And off the comfy couch she goes. Trots right in there. She knows who the alpha is. My human, I go with my human.

She adores him as she did my dad, maybe especially when he makes her look super cool, 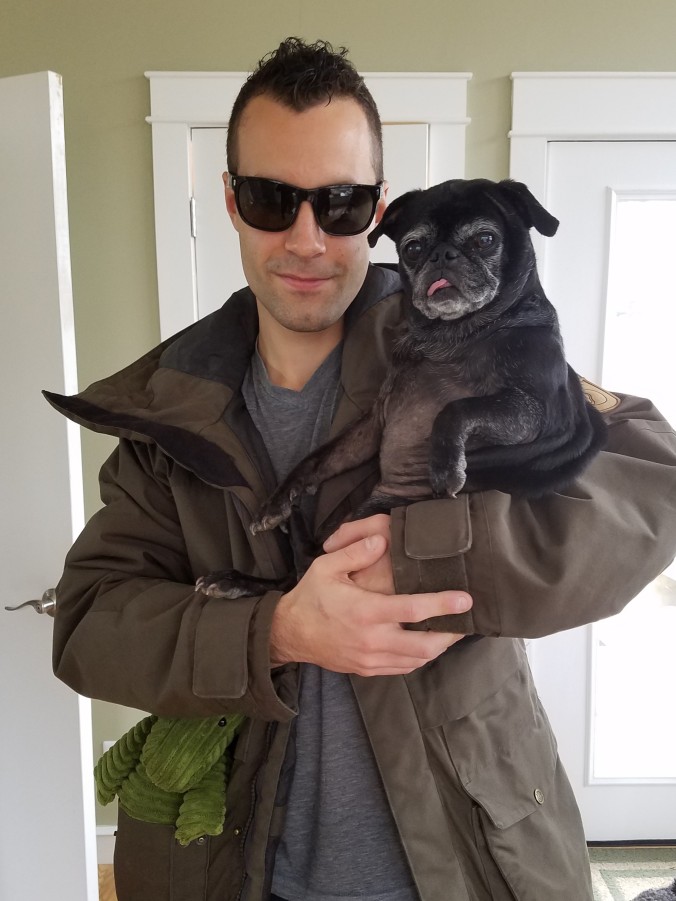 and even when he lets little children (Piper in this photo) reach out to touch her pink tongue that doesn’t seem to fit in her mouth. 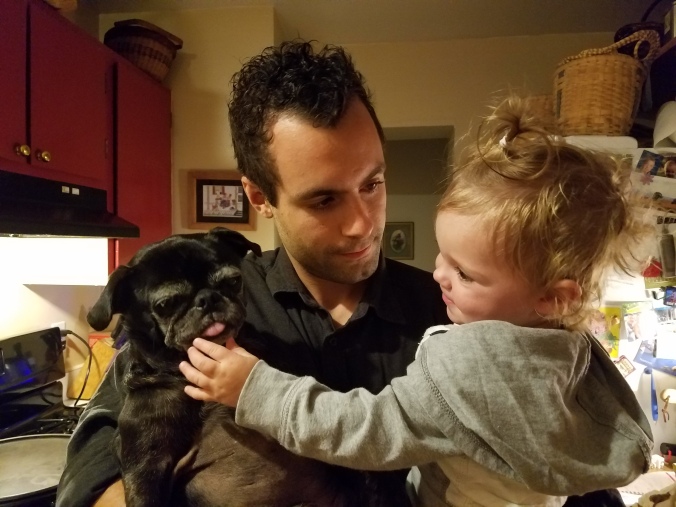 It’s a different life with Samuel, certainly more active, possibly more amusing. Now you want me to do what? 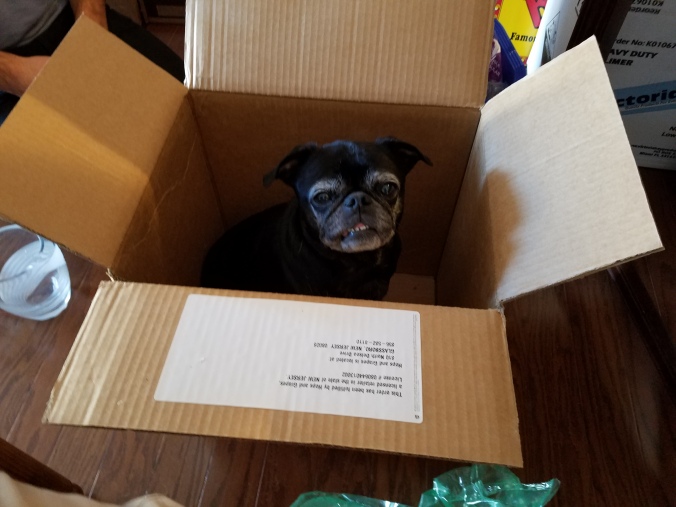 And these chickens? she says. Why are they here? 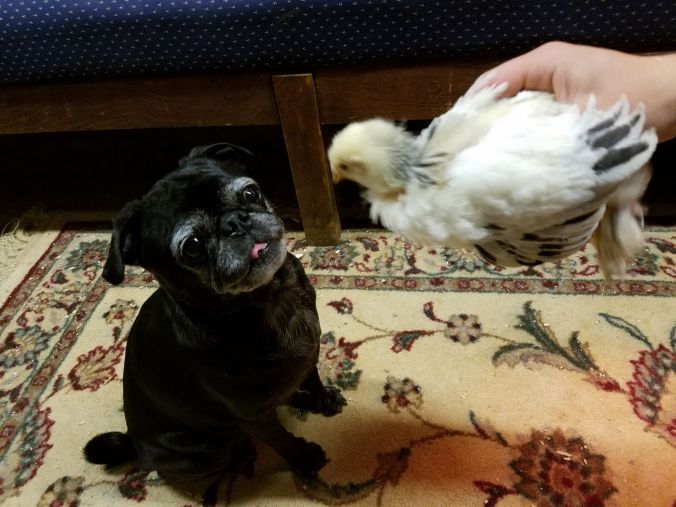 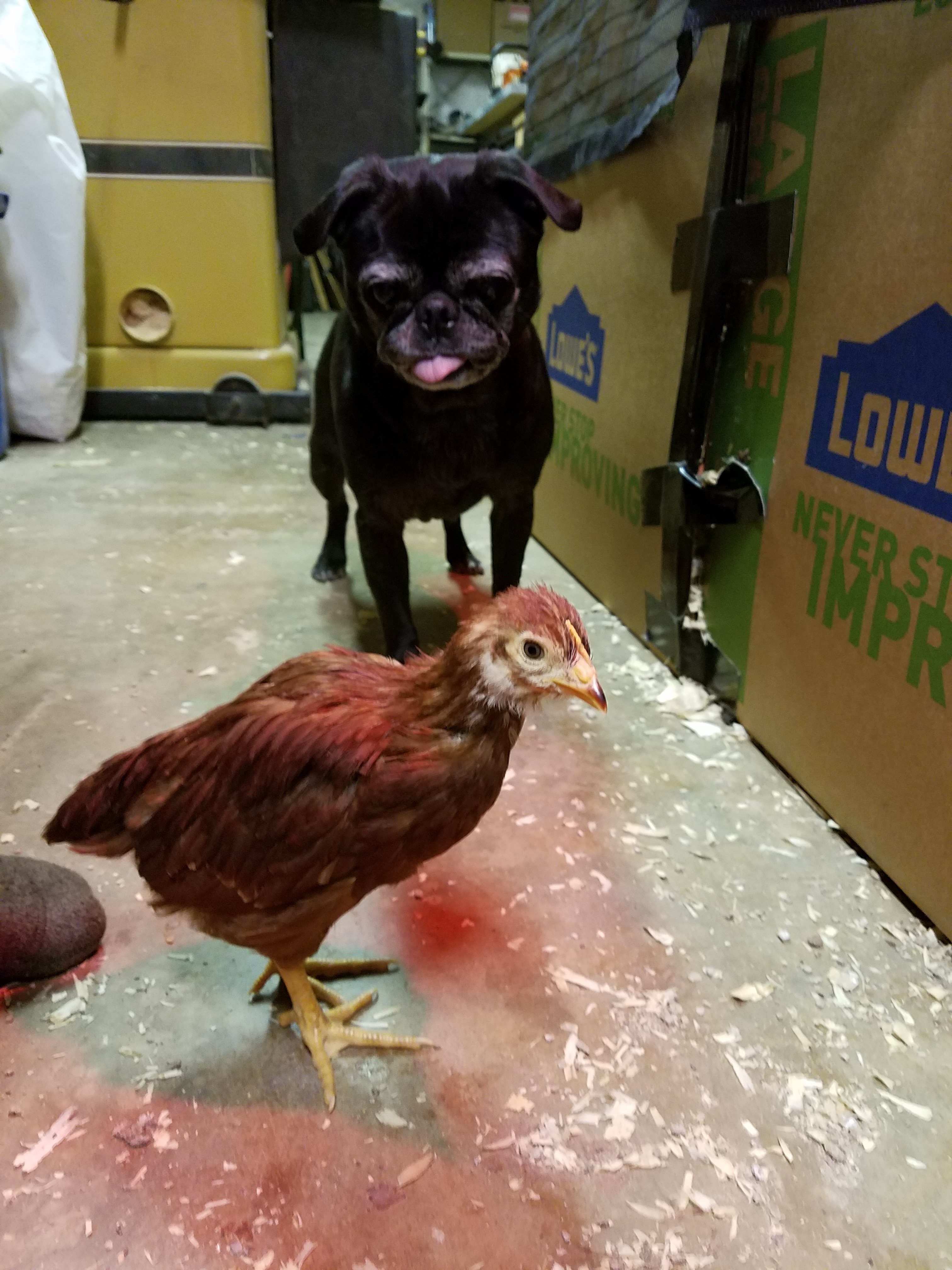 But she still finds the sun spots. 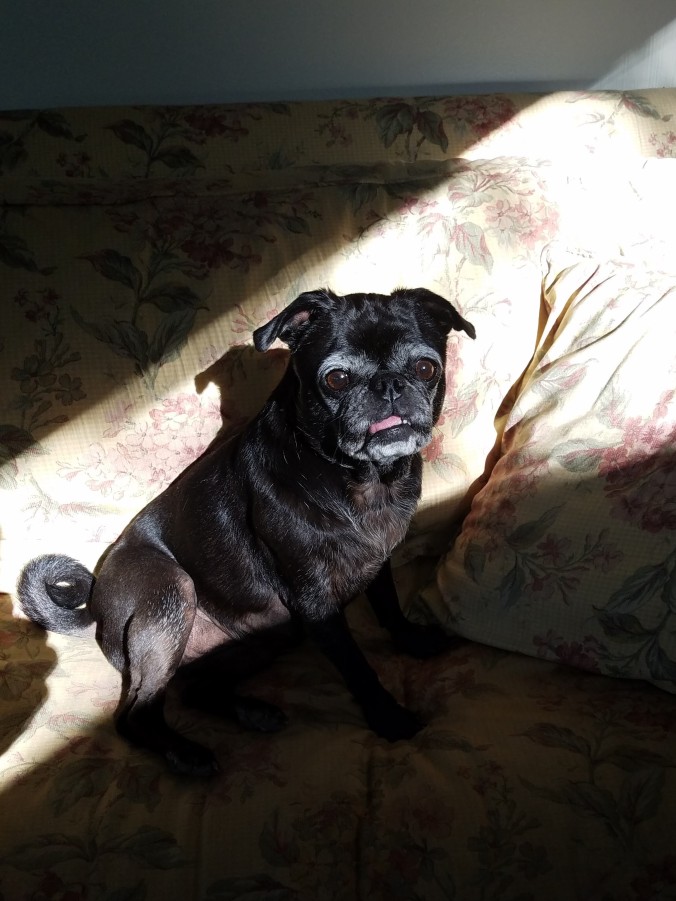 And she still has one lap she loves more than any other. It’s a very good life for this little black pug. And we love her just the way she is. 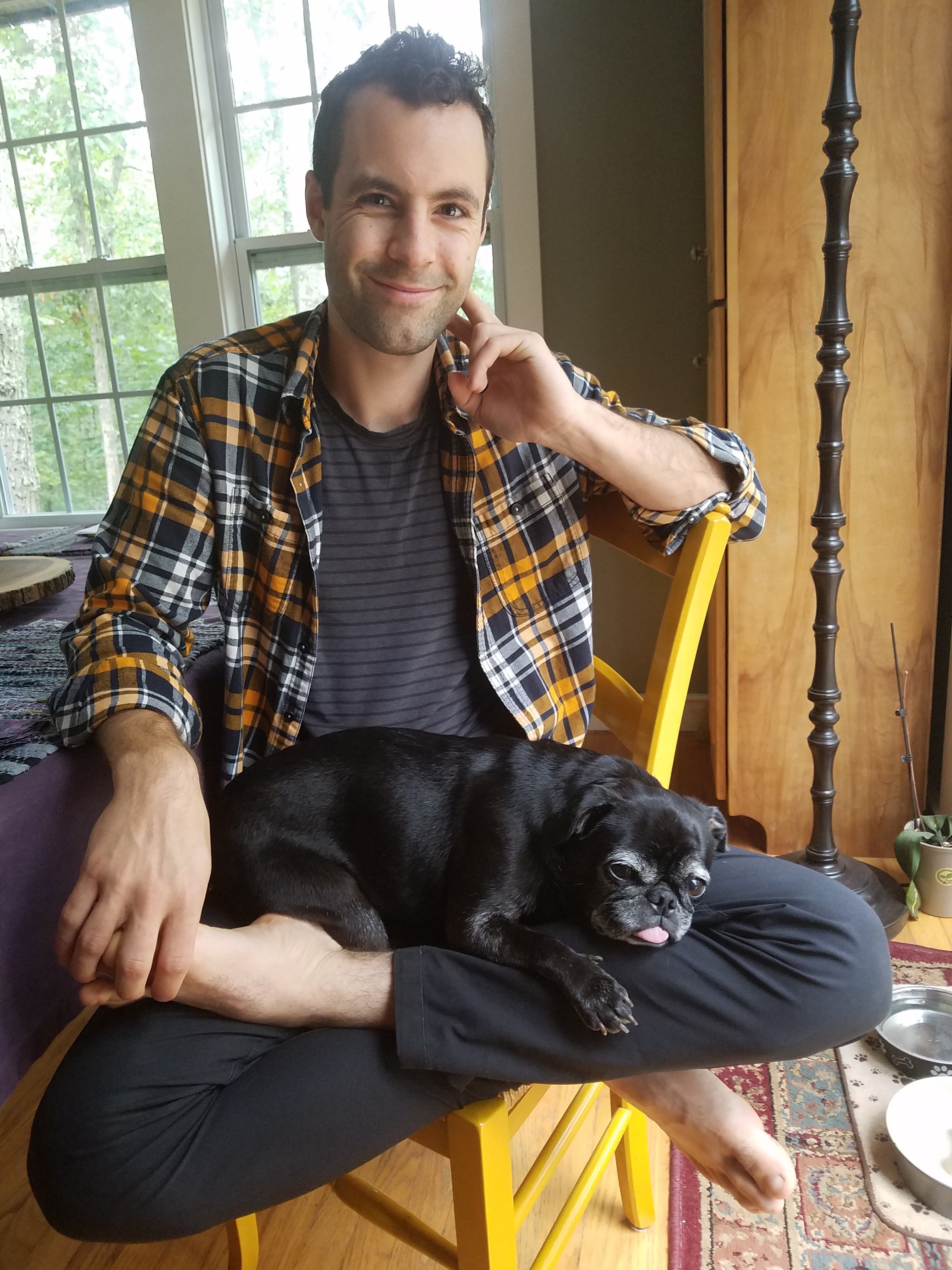 3 thoughts on “Coco, The Pug in Our World”