On Labor Day I went to a Lobster Fest and came home with three bags full of claws, heads, bodies, guts and other assorted lobster leftovers. I give everybody who comes – no, not lobster leftovers! – I give all family and friends and all cottage guests the chickens-eat-everything spiel, so I put it to the test. Will chickens eat lobster? You bet they will!

(For future reference, do note the color of the lobster shell.)

Let’s be reasonable though, one bag at a time. If I hadn’t been worried about how long it would take leftover lobster to start stinking up my downstairs fridge, tightly tied up though the bags were, I might have allotted half a bag at a time. But a predetermined plan to do that wouldn’t have mattered. By the time I emptied half the bag, I knew they’d get it all. The chickens in most cases get super excited when you give them food (any food will do!) and that keeps you giving them more and more if you can. Poor babies – you’d think they were half-starved the way they beg! Plus, the bag is icky and all you want to do is finish giving the Sewing Circle half the bag and the Bridge Club the other half, and then throw that bag away!

Yes, Sarah, thank you – I love your names for my two groups of hens. Traditionally, ladies sewed in small circles and ladies formed clubs to play bridge together, and my hens are ladies. Besides the eggs that put them in the female camp, I can call them ladies because they are mostly quiet but sometimes squawk, they walk gracefully around thinking/knowing/showing how beautiful they are and they tend to form little groups or clubs among themselves (and not always for benign purposes but sometimes, like Wives of Atlanta or Wives of New York, to establish and maintain pecking order, which is not always pretty, thus the fence between the two groups!). And some of them, like my silkies, are having a bad hair day every day. You may recall. 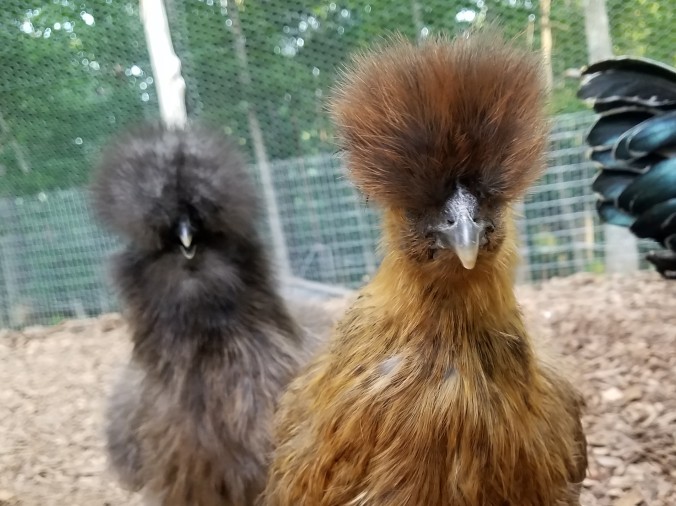 I like Sewing Circle for the brahmas, cinnamon queens, Rhode Island reds and the lone araucana (old Miss Gray) – the white ones to the left in the first photo – because some of them (the brahmas and the cinnamon queens) have distinctive darker feathers on their heads like a hood, which makes a kind of circle around their necks. I like Bridge Club for the silkies, black copper marans and lone d’uccle because some of them (the silkies and the d’uccle) are in that distinct grouping of chickens called Bantams (lightweights). My brain, along with everything else it remembers and processes, can make short work of Sewing Circle: circle and Bridge Club: Bantam. I think it’s brilliant.

As previously blogged, the Sewing Circle dove into the first round of lobster leftovers with a vengeance, but the Bridge Club was strangely reluctant. It’s all the same to me. Who am I to say that anyone or any chicken should eat lobster or some other decadent, succulent, protein-rich food? Chickens love bugs. They hunt all day for them, prize them, devour them. And what is a lobster but a big, waterbound bug?

But I think the Bridge Club came around. In fact, I have the idea that one chicken lorded it (ladied it??) over the others and got the lion’s share of the meat, and the guilty party is Miss D’uccle. Here she is. Does that look like a face you want to mess with?

Why do I think this? Miss D’uccle is small, the smallest of the smalls. This does not stop her from being possibly the most obnoxious of all the birds, yakking all day long. I sometimes remind her that I ousted the roosters on account of their noise! Nonetheless she is a contributing member of the flock, though it stands to reason that she would also lay the smallest of the eggs. Can you pick out which one is hers?

That’s right, it’s the whitish one near the top next to that speckled one. That’s some variety of color, size and speckledness, no? I think they are so beautiful!

For the contrast, I broke the huge whitish one first (it is actually pale greenish, but my lighting is poor and doesn’t make the subtle difference clear). Then I broke the d’uccle egg. Guess who’s been hogging the lobster! Or maybe just got more than her share?

I broke three or four more eggs, all of which were more orange that the huge one but none as orange as Miss D’uccle’s. When beat up, however, they made this rich color. You hardly ever see the likes of that when you are about to scramble eggs. (I promise I did not retouch this photo – I’m lucky I know how to insert them!) 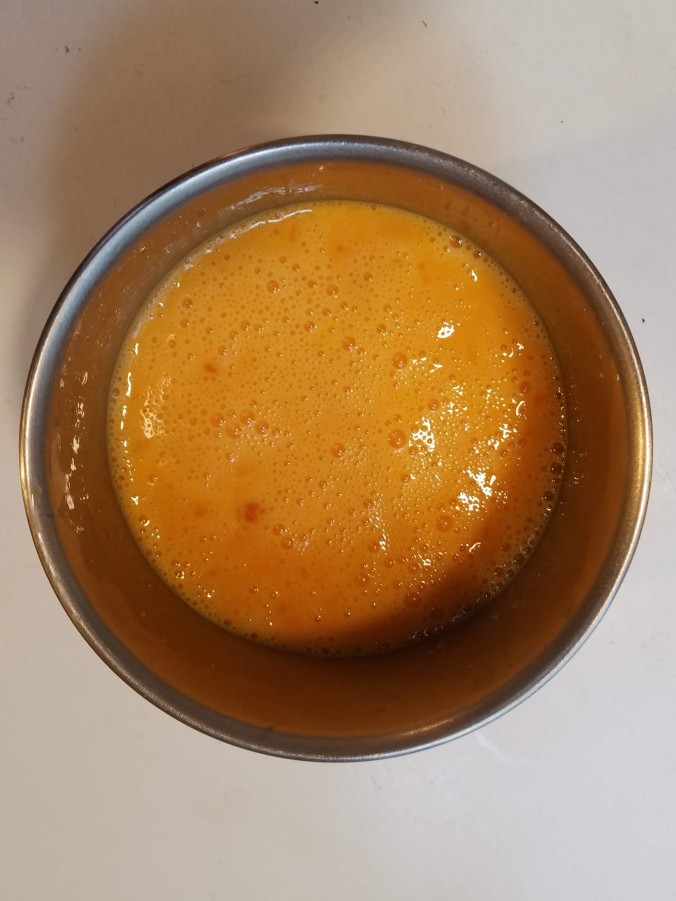 Now I ask you – are my chickens eating better than most chickens? Better than the chickens whose eggs you eat? Granted, lobster for dinner is a rarity, especially for chickens. But we take what we get and I took the lobster. Kinda makes me want to ask for more leftovers, whatever they might be…