Some people have all the luck. Today, I didn’t. I was on the way to Washington, D.C. to pick up a friend at the airport. I time these things well in general, so that I arrive not too early and have to sit there, but early enough that I am not stressed about getting there on time. I allowed enough time for a little traffic, but didn’t anticipate too much of it since it was already mid-morning when I approached the D.C. area.

I like to sing in the car when I am by myself, so when I have some time, I put in an old CD and cut loose with Kelly Clarkson (the trouble with love is… … it can tear you up inside…), Girls Aloud (JUMP! For my love) and Norah Jones (…my glass is a-waitin’ for some fresh ice cubes), off the soundtrack from Love Actually. Think what you will of my taste in music, this stuff is serious sing-along material! There I was, singing (if you can call it singing) when I decided to stop at Wegman’s in Gainesville to stretch my legs. There I noticed a little light on my dashboard. It turns out to be the low tire pressure light. This light. Sorry it’s blurry. I think my hands were shaking when I took the picture later.

Oh, that’s nothing. I’ll worry about it later.

Bad decision. About ten miles later, while traveling at full speed on I-66 eastbound, my car started bouncing. I thought maybe the road was uneven, in need of new paving. Wrong. The car really shook, and then started to smell like something burning (this is bad, I know), but I had nowhere to go. The road had those solid barricades that block the shoulder, so I had to keep going until there was a break in them. I don’t know how long I drove with that bumping and burning going on. I just knew: It’s not the road that has the problem here!

I totally forgot that when the weather is very hot — and it has been very hot lately — the tire pressure goes down. My tires have had their pressure go down before in very hot weather. It just hasn’t happened often enough to have imprinted strongly in my brain. Perhaps I will remember this correlation in the future, now that there has been a consequence?

Safely off to the side of the road as quickly as possible, no mile markers in sight, no road signs, no way to know my own whereabouts for sure and be able to tell someone where to find me, I discovered that AAA can figure out where I am. They did. While waiting for help to come, I discovered this, 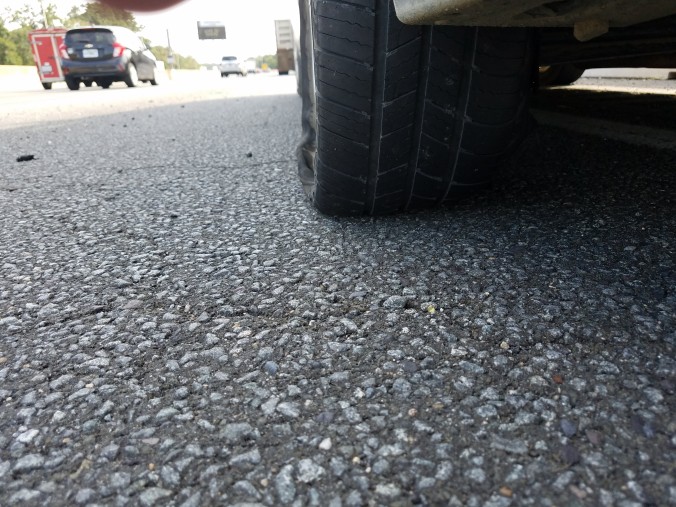 which looks bad from this angle. In no time, it seemed, Sirri arrived in his big tow truck. (Word to the wise, and I can’t know for sure, but I think the stress in my voice when I called AAA helped them make mine a “priority” case. He arrived within about 20 minutes.)  Blessed man, he got to work with a good spirit. 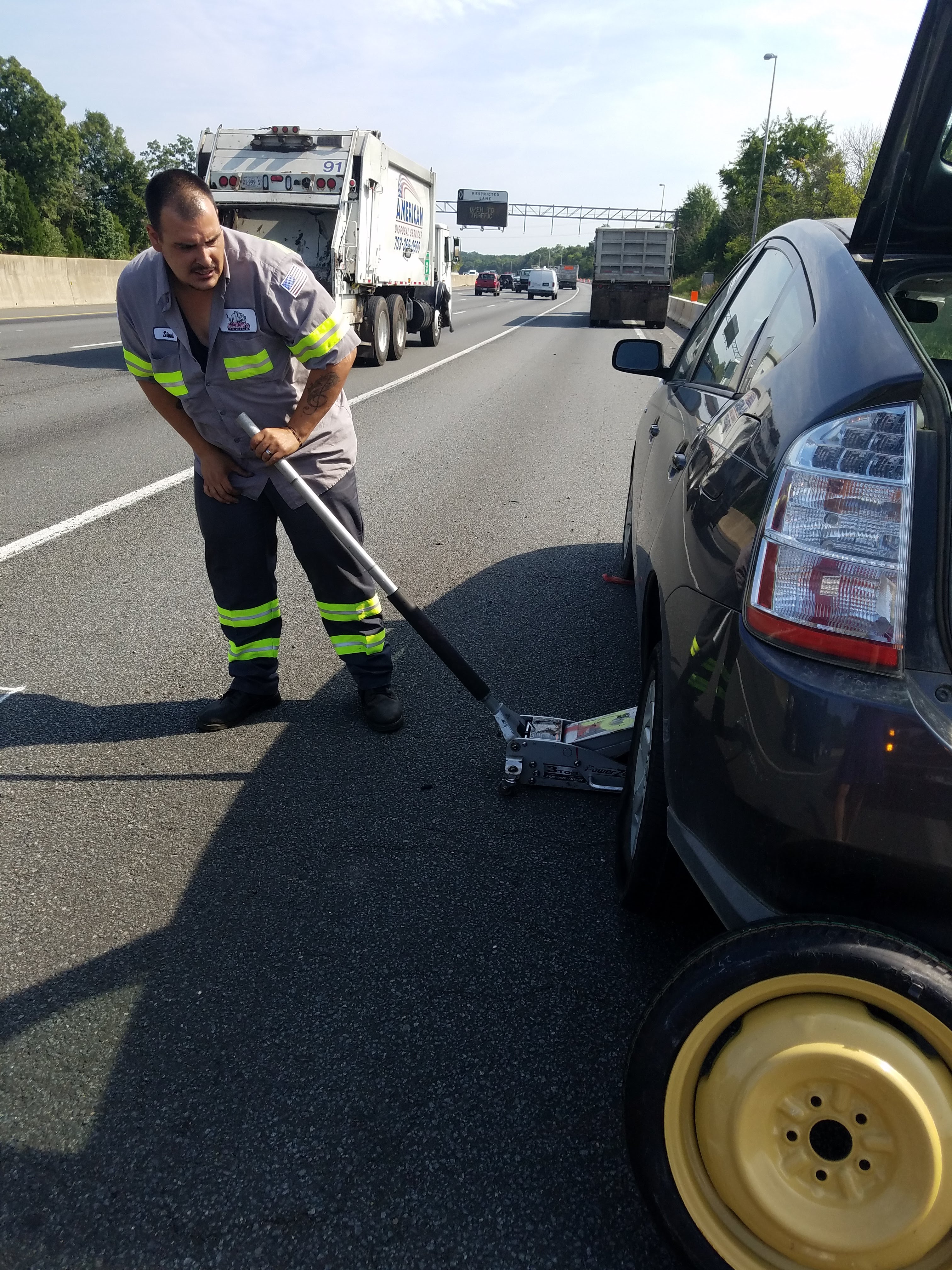 Yeah, I blew the tire.

Perhaps more impressive from the top?

Just last week I had been bragging that I never have problems with this car. It’s the truth (mostly!) but maybe I should be more careful what I brag about. Needless to say I did not get to the airport on time, and simply met my friend at the hotel a little later. My heart did finally stop beating at increased speed, though I did not take the well-intended advice to try “scotch and chocolate” to calm down. Instead, we hit the ground running: National Archives, Spy Museum and Ford’s Theater. Did you know there is a stack of books about Abraham Lincoln that’s three floors high? 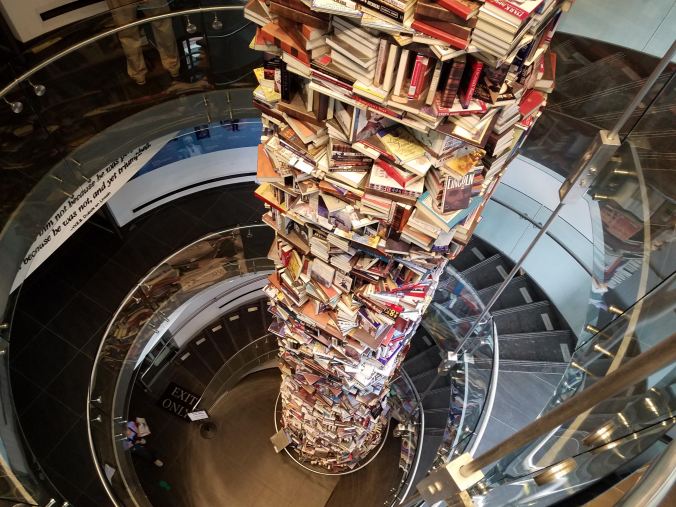 I wonder if just plowing ahead – you have to take advantage of every minute in D.C., there is so much to see! – maybe helped mitigate the stress. The Spy Museum is very cool too, by the way. I loved how they showed perfectly honorable people like George Washington absolutely dependent on the intelligence gathered from his spies, the part where they reviewed the qualifications for being a spy (sense of adventure, willingness to take risks, patriotism, etc) and – this being especially interesting after a car adventure today – the ways people have hidden within (and sometimes under!) cars to escape detection getting through checkpoints. I was so distracted and engrossed by all of the fascinating exhibits– and in the case of Ford’s Theater, positively, emotionally moved — that I forgot all about my tomorrow…

Tomorrow, right. It’s a Saturday, possibly a rainy Saturday, and after a tour of the Capitol, we will set about finding a garage that will have a couple of new tires for me. They will have the ones I need, right? And there’s nothing else wrong with my car? That oil we saw under the car in the garage when we went to check the tire size was from the car that was in that spot before me, right? Not my car. And I will be able to get home on Monday as planned? And… and… good thing the stress is gone!