Yams were $0.79/pound yesterday in my grocery store, which must mean that they are coming into season. And now it’s September (how can this be!?). As soon as the air is a little cooler at night and you start to see the leaves turning color or falling – here and there they are doing that already in Virginia! – it’s time to think about the fall recipes.

Yam soup is one of my favorites. I first had it a few years ago when Mario, the “Villa Lunch” chef at the hotel where I worked, included it in his buffet. This is Mario in his glory. It was a nice hotel. 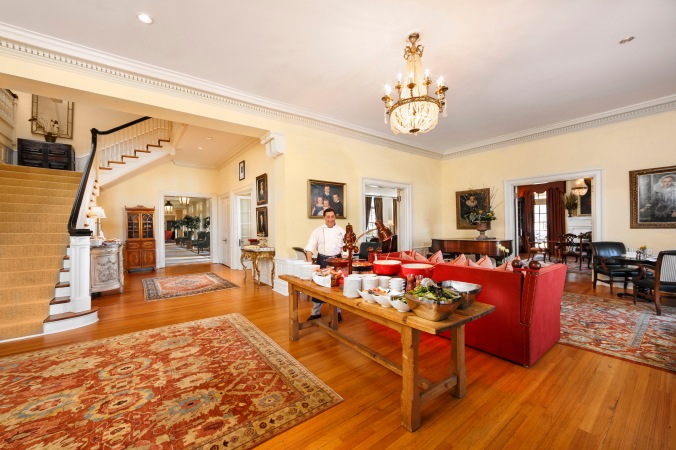 Unlike most cooks, Mario was out on the floor daily. He made all the food for Villa Lunch starting at 7am, then came upstairs with it at noon and personally sliced the meat and spooned the sides onto the plates of very happy guests. He is talented, personable, kind and funny – absolutely perfect for this job. He often made up a plate for me as he was breaking down the buffet table around 2pm. It would include whatever I wanted from that day’s items, quite a nice perk! He knows how much the guests loved him from the stack of comment cards collected over the years that sing his praises. I hope he takes those out of his desk and reads them now and then.

Mario’s yam soup was a guest favorite – out-of-this-world flavor, but so simple. If you were preparing lunch for 40-50 people every day including a soup, a salad, a main dish (and associated sauce or accompaniment) and two hot sides, various cold salads and a cheese and charcuterie board, and you had a total of five hours to get everything ready, you would keep it simple too.

I posted this recipe on July 19 (in The Cookbook Comes Out). Here it is again. Now’s the time to make it.

You might want to divide all the ingredients in half (and if you want to use three yams instead of two and a half, it won’t hurt anything). This recipe as it is makes a lot of soup. It freezes very well and I have always made it in this quantity, but you need a big pot. A really big pot. To get an idea if my regular Dutch oven would be big enough, I put the yams and onions in it, whole, and then tried to imagine having to add the oil, wine and a gallon of water. I don’t think so.

I had to bring out my big pot. It’s considerably bigger than my Dutch oven, bigger than I really need, but better to have more room in the pot than a quantity that is unwieldy at best and possibly might even spill over. My big pot is this big compared to my Dutch oven. It worked.

A pot midway in size between these two would have been perfect.

Having settled on the right pot, I started chopping. Those of you who are very sharp might have noticed that there are more than 5 onions in my pot in the photo above. Isn’t that the thing about recipes? They tell you 5 onions but not necessarily how big the onions are supposed to be.

I have Mario’s onions in my mind, the huge ones I saw him cutting up when he was making this soup. My onions are not huge. They are from my garden so I love them, but they are on the small side, so I used seven instead of five. Mario might have used ten of this size, but I’m going with seven. That’s the thing about onions. It doesn’t matter that much how many – more gives a stronger onion flavor, fewer gives not as strong an onion flavor. Your call.

(The yams look redder in this photo than they are.) 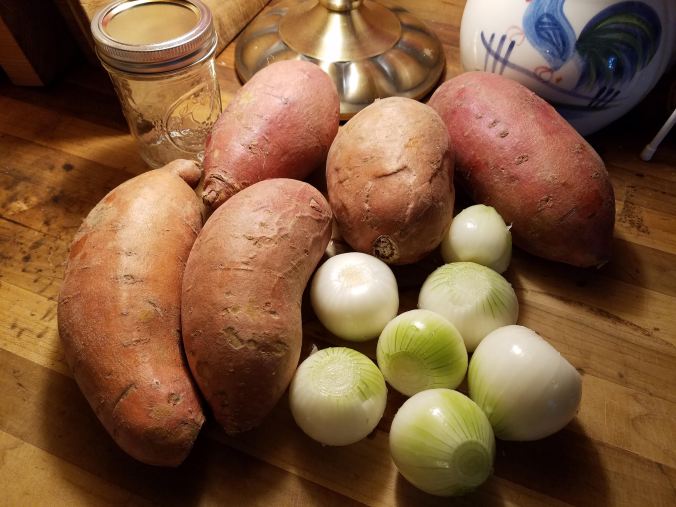 I put the cup of olive oil in the pot, turned the flame on low, and proceeded to chop up and add the onions to the oil. My onions were chopped like this. I chop them on a separate board – always have, this particular board for decades actually – because as much as I love onions, I don’t want their flavor/odor getting into the wood of my countertop and I don’t want the thing I cut up later (let’s say, watermelon) to pick up any of that flavor. It’s a small price to pay for the joy of chopping on a wooden surface. 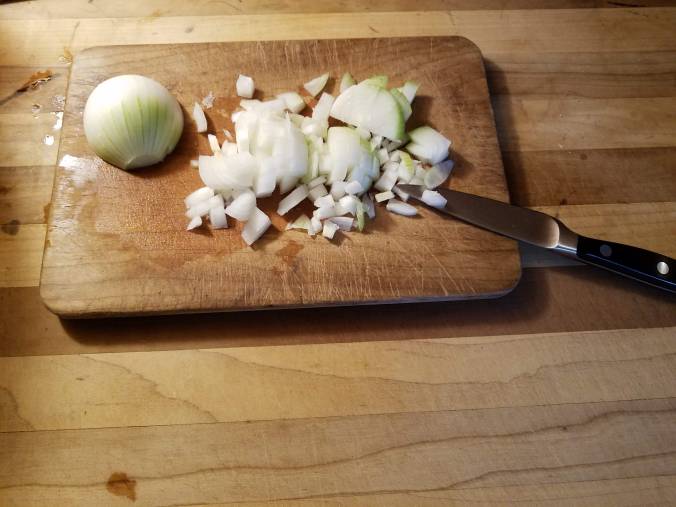 The onions in the oil are a thing of beauty.

There are two ways to peel a yam. One way is with a peeler and the other is with a knife. The peeler works only if you have a good peeler. Even then, it is simply a matter of preference.

When it is peeled and the end is cut off, it looks like this.

I find it easier to slice it into thick wheels first, and then cut off the edges. For this I use my 10” chef’s knife. First make slices about ¾” thick.

Then, either in a small stack…

…or one by one, cut the edges off.

Then cut them into cubes…

… and put them in with the onions.

I turned it down to low and put a cover on to let this all soften. About 20 minutes went by before I remembered the wine. White wine, the recipe says. Talk about UN-EXACT! I guessed at a chardonnay. It also happened to be the first thing I pulled from my fridge. Chardonnay will work, I decided. Pollak is a local Virginia wine and a very nice vineyard to visit if you are in the area. 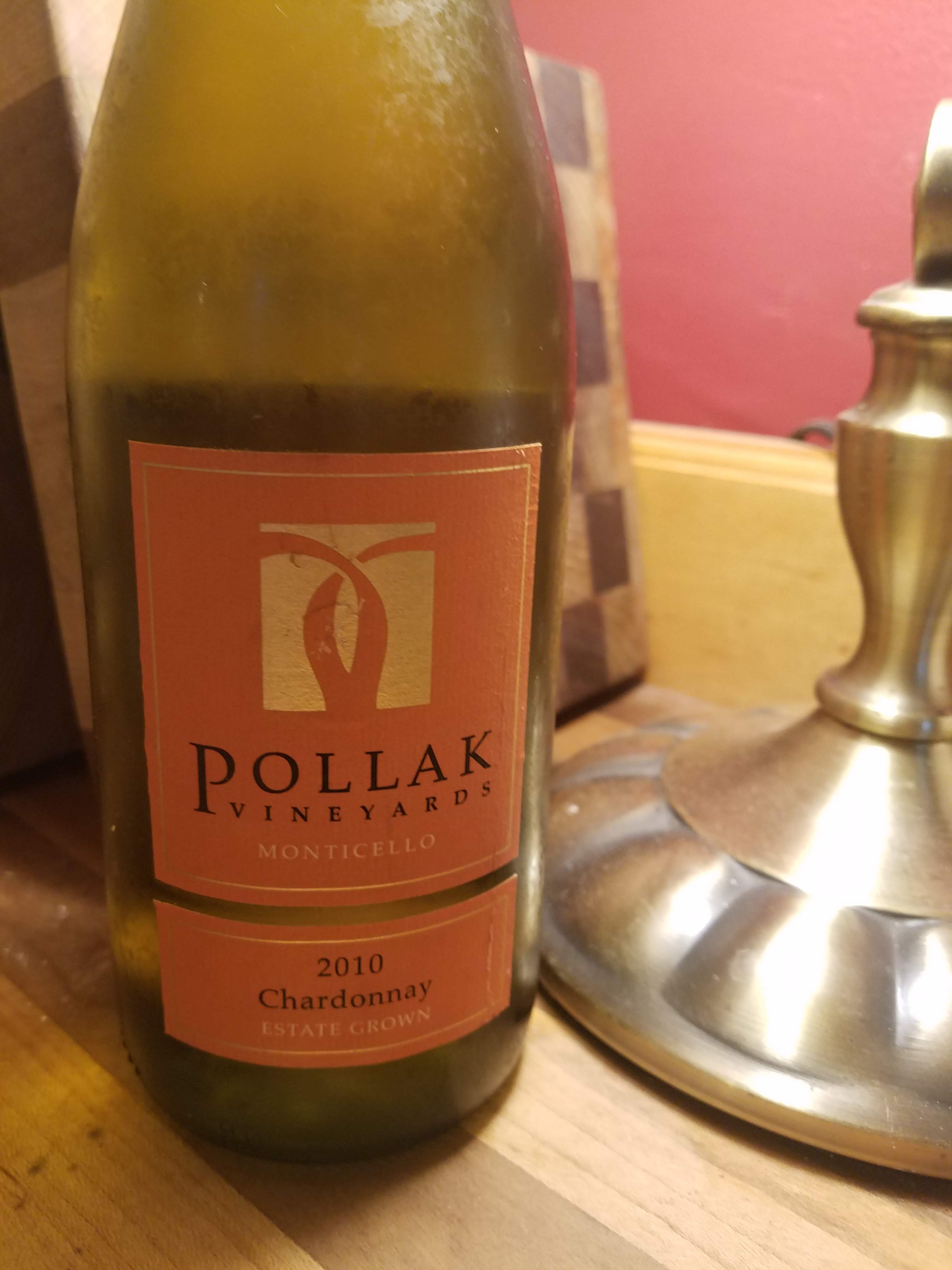 In went the wine and again I covered the pot, this time forgetting the water! Not the end of the world, she says ten minutes later. The veggies had already cooked down a bit, were not quite mushy but getting there. In went the gallon of water. It seems less formidable if you just fill and dump your quart-size measure four times. Then it looks like this.

And in half an hour it looked like this. 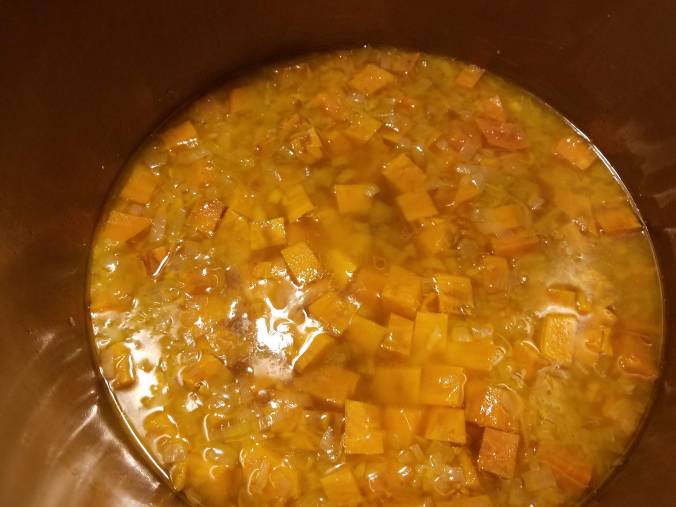 That’s when I turned it off and let it cool. You don’t have to let it cool before the next step, but I was going out to read to Evelyn (we are almost to the end of the Queen Victoria book!) so I left it.

There would be two ways to “just blend it,” as the recipe says. God bless him, Mario means blend as in blender, electric blender, and there are two of those: the traditional stand-up blender and the immersible kind. Let’s try both, and see.

I put some in a bowl, thinking I had a big/tall enough bowl for the immersion blender. Wrong. It made a splashy mess and did not puree the veggies as I wanted. Reject this method.

I got out the tried-and-true blender that has to be 25 years old, filled it about halfway, 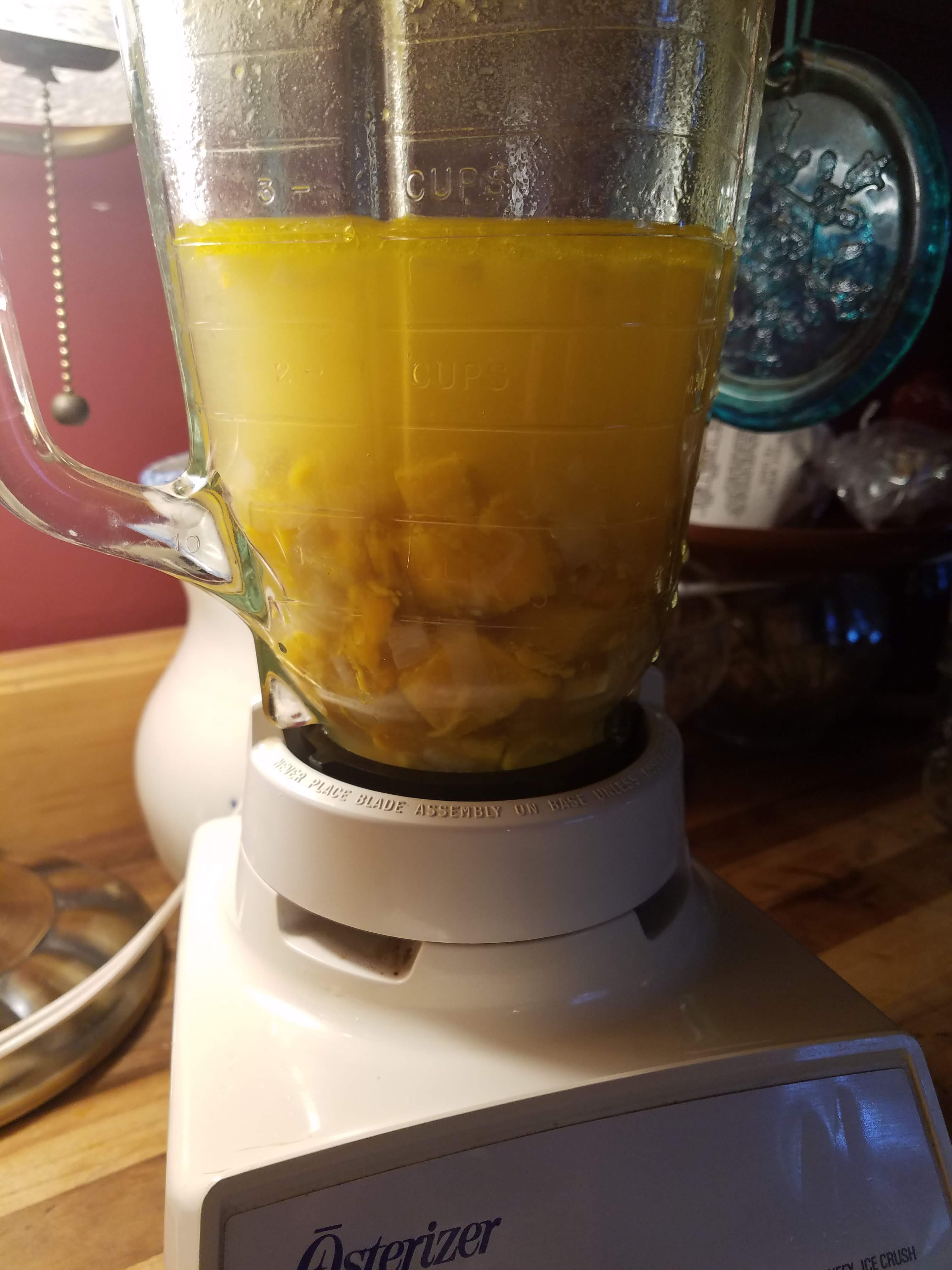 Don’t you love that word: Voila! 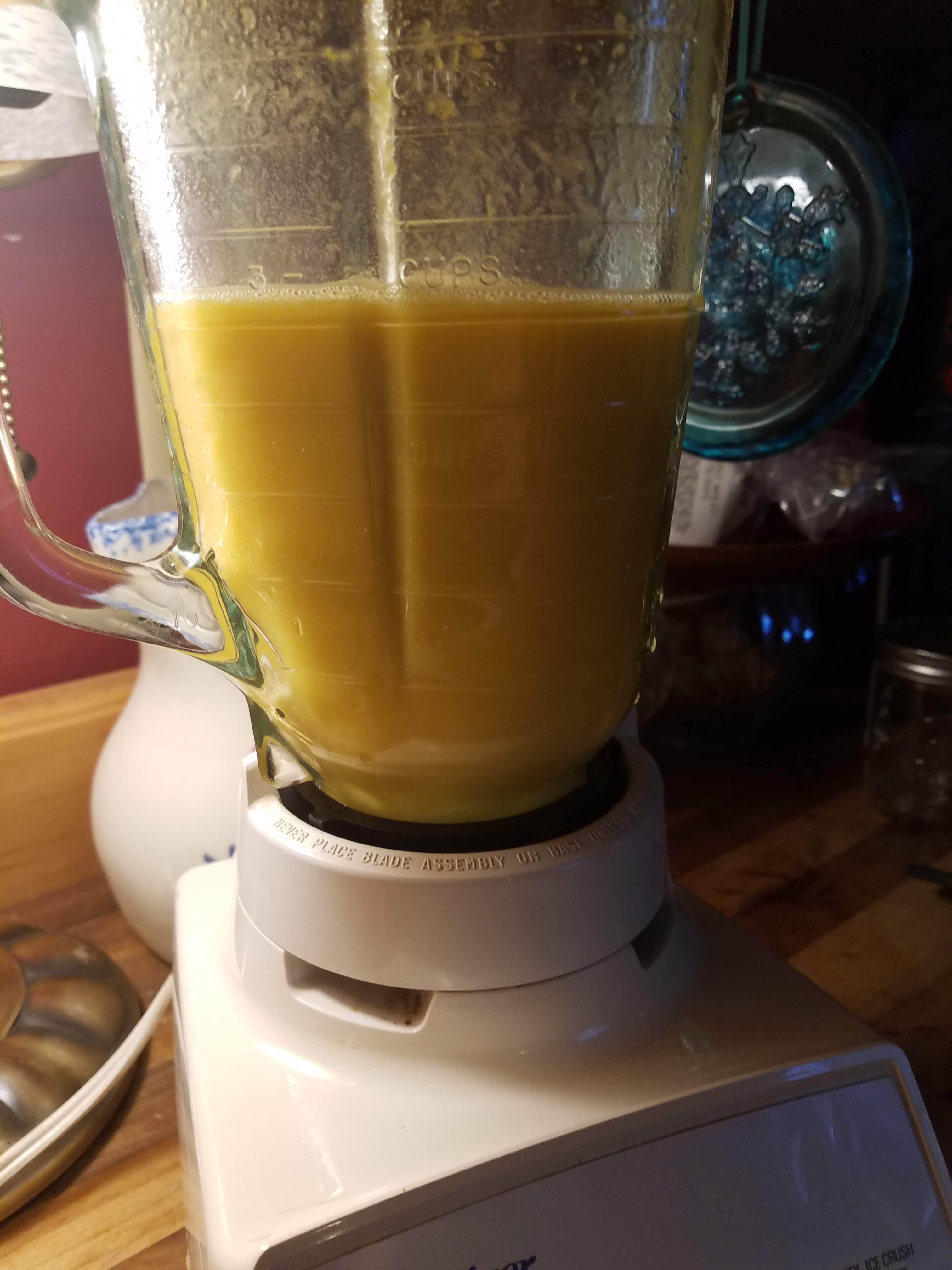 It was enough. I transferred each blender-full of the now-pureed, almost-soup to the regular size Dutch oven. Fill, puree, repeat until all is done. I got this much, which turns out to be just shy of 5 quarts.

Add salt a teaspoon at a time, remembering that salt enhances the flavor, brings it out. Stir and taste each time. Too little is no good. Too much is no good. I needed about a teaspoon per quart to make it taste right (to me). Add pepper to taste.

When you heat it up to eat it, put some of the Backerbsen or some other little crouton on top of the soup in your bowl as I suggested with Mom’s Tomato Soup. They would be terrific on this.

Please let me know if my efforts to be EXACT in my instructions are not exact enough. I was timing something earlier, another recipe I might share, and Samuel, my son who’s 24, chided me. “Since when do you time things?” he said to me.

“Since the people who read my blog requested that I be EXACT,” I replied.

“Is this an effort to rebrand yourself as someone who gives specific instructions instead of your normal ‘you’ll know when it’s done’?”