I feel the need to revisit a topic from about six weeks ago because progress has been made and progress ought to be noted and celebrated. I refer to the reluctant chickens, the ones who have a Taj Mahal of a coop and don’t seem to realize that it is theirs to use as chickens normally use a coop.

A great deal of time was spent designing, constructing and outfitting said royal palace.* There were simply too many new chickens for the old coop, and since the bantams had been separate since their chickhood from the larger birds, we decided to keep them separate henceforth.  The new coop has features you’d think the little chickens would brag about to their well-adjusted neighbors in this photo who happily occupy the adjacent old coop at night as chickens are supposed to do. 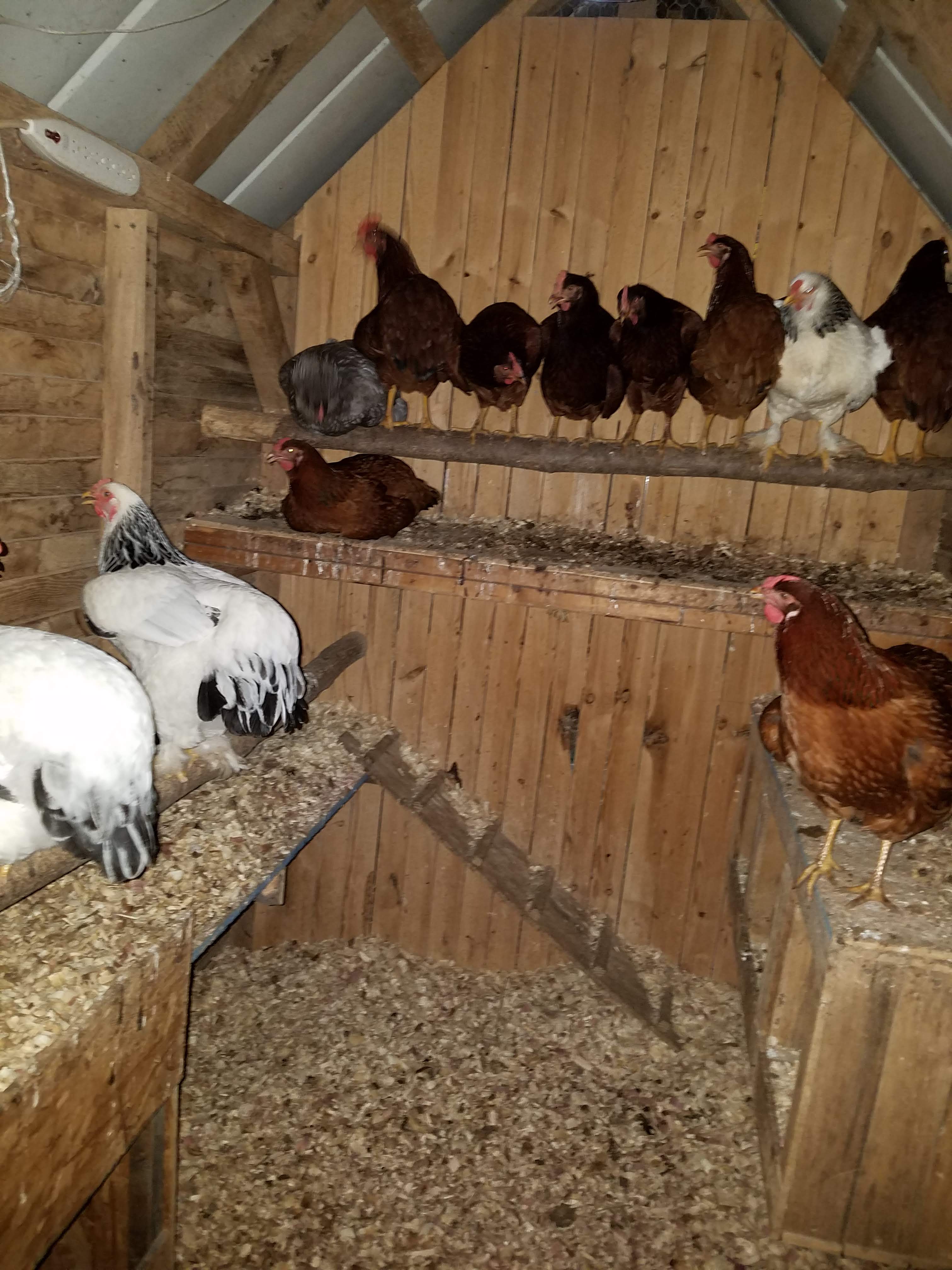 (It does seem that they sleep standing up, which I suppose is to their credit. This habit baffles me.) These birds come in through their little door at night and go outside through the same little door in the morning. Let’s just say this in-out routine is normal.

Back to the bantams, my set of which includes silkies, black copper marans, a lone d’uccle and some mixes of the same. (There will soon be a new name for this group thanks to clever input from readers, but all in due time. For now they are simply the bantams.) You may recall from an earlier post** that despite the coop being ready for them, despite it having food inside, these little hens decided to sleep on the ground outside. 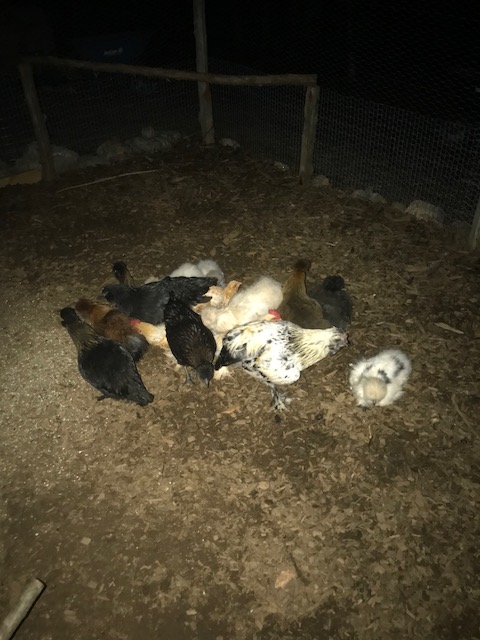 One night we found them in this same place as it torrentially poured rain. (No photos of this, needless to say.) They just sat there in the rain, soaking wet. One by one we picked them up – no resistance whatsoever on their part – and put them in the coop to dry off, and left them in there for a few days to get used to it. In the meantime we changed out this very cool entrance ladder, which possibly was too challenging. 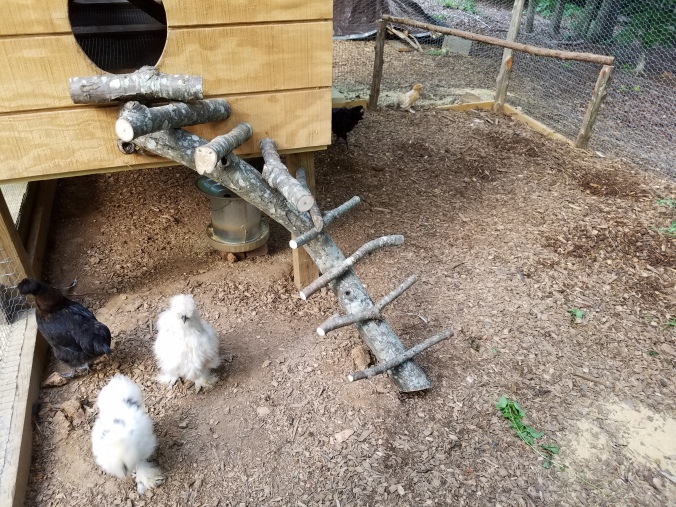 The new ramp has to be easier. I caught this hen coming down the other day. Maybe she was practicing? 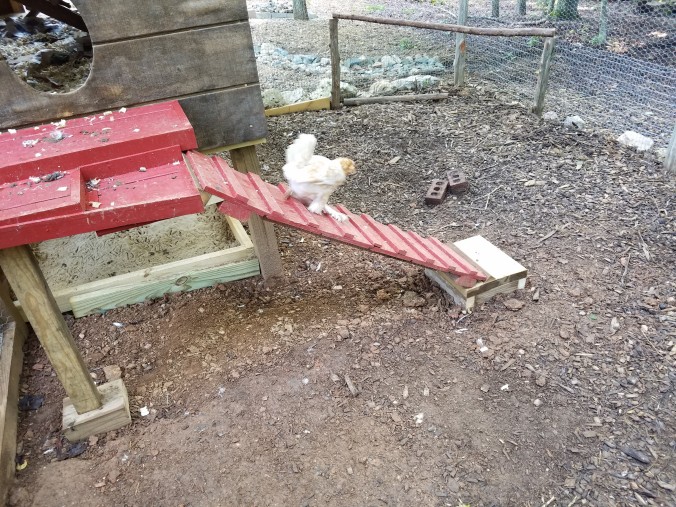 I did not plan on checking on them tonight, but it’s a perfect August evening, a little cooler than recent evenings, and I wandered toward the soft lights of the solar-lit coops when I took Coco out just at dusk. To my delight, I found the ground of their outdoor run empty … 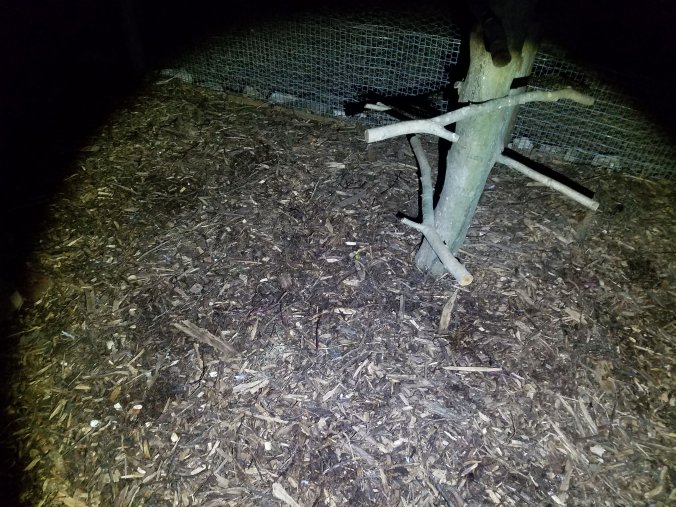 but were they inside?? One was. Good little d’uccle (!), setting a fine example for the others, not only inside, but perched on the fine cedar pole. 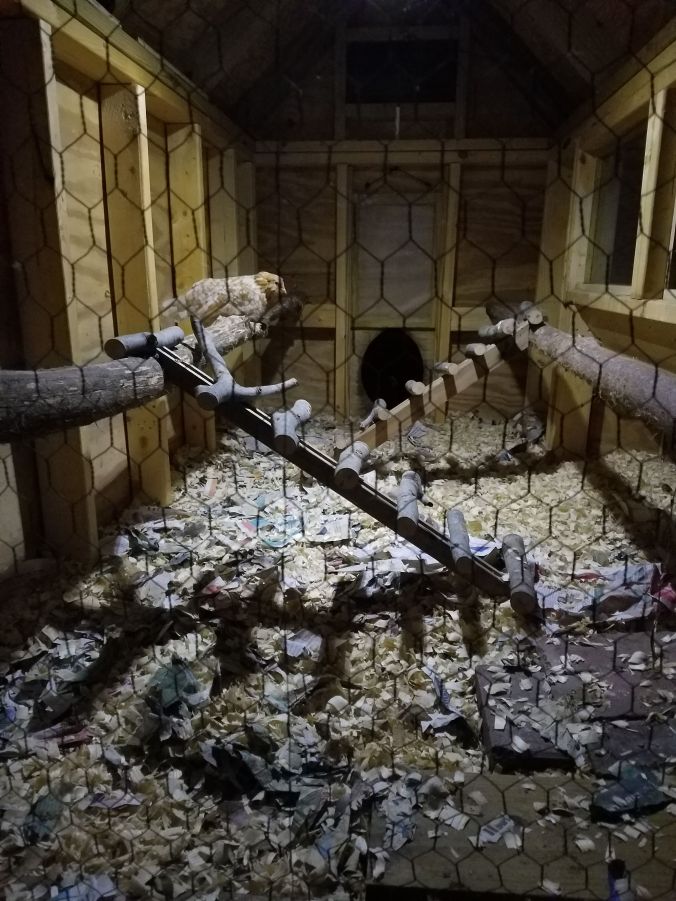 The idea of the cedar poles and the front windows was to be able to see them roosting. One roosting chicken viewed through the window, and the smallest of them to boot, is not overly picturesque. Imagine how much cooler this image would be with a bunch of chickens roosting on the pole as the other chickens do in their coop. 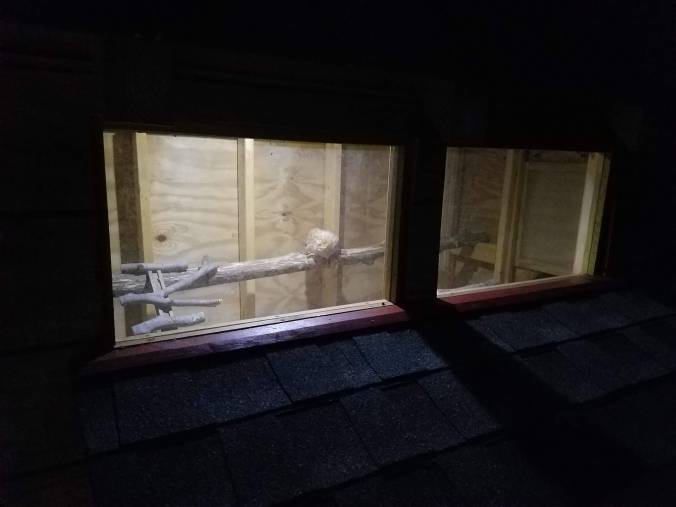 Where were the others? Huddled on and under the modified ramp they were! Why? Enjoying the night air? Who knows? Unwilling to share sleeping quarters with Miss D’uccle? Still waiting for the little voice inside to say It’s okay, really, you can go inside! 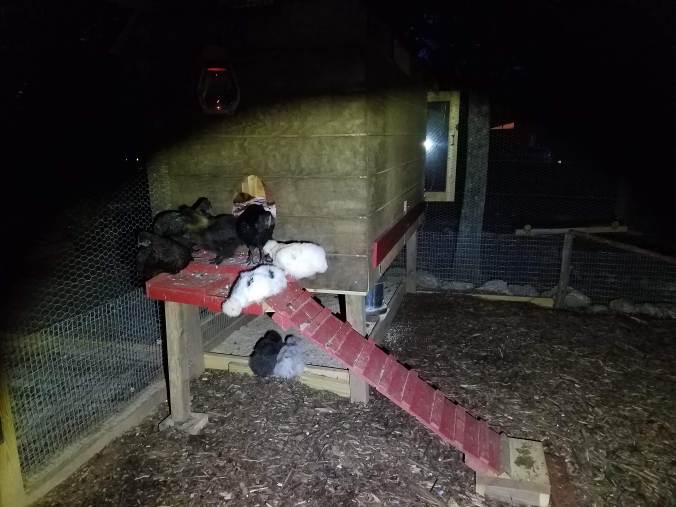 I cannot say why Spot is hanging off the front corner like that. Looking perhaps to see how far a drop it would be if she got unsteady in her sleep? Spying on the two silkies paired up down below? For that matter, why are those two there? Being shunned for bad behavior? Not enough room on that platform? Planning their next practical joke on the others?

But they are making progress! And I applaud them! I don’t know what measure of courage or daring it took for them to walk up that ramp and park themselves up top for tonight. Certainly we could fault them or chide them for not going just a few more steps, through the totally amazing egg-shaped door and onto the very fine cedar roosting poles as we hope they will do. But I say Bravo! They’ve made it to the platform!

Too often, isn’t it true, we ourselves make the tiniest steps of progress or we see it in others and we let the moment pass unnoted! Or worse, we look at how far we (or they) didn’t get instead of how far we (or they) did get. Maybe these hens are an example to us that even small bits of progress are still progress, and sooner or later we too will walk our own ramp and maybe we too will sit there a while before we work up our nerve or have the self discipline to go a little farther.

Maybe you have a thing you’re trying to train yourself to do, like drink more water or speak kindly more often. Maybe you’re trying to refrain from a bad habit, like trying to drink less soda or get angry less often. Whichever it is, doing or not doing, make sure you take note of the successes. Celebrate these. Build on these. Note them well. That way, when the setbacks (invariably) come, you will have something to balance them with. You can remember all those times you made progress and the picture is not so bleak. Less bleak is good!

Thank you, little bantams, for showing us one step forward.

*June 23 The Building of a Chicken Fort

2 thoughts on “One Chicken Step at a Time”