As we left Lyn’s house in Vermont last week, she handed me a jar of cookies, homemade maple cookies, homemade by Lyn herself of course. My heart warmed on seeing that jar, wrapped up pretty with beautiful, delicious cookies inside. It was my jar and she was, on the surface of it, giving me my jar back. This past winter, I had used it to give her some of my Virginia applesauce. In Lyn’s book, you don’t return the jar empty, or the container, or the plate, or whatever was used to give you a gift of food. You give it back with something yummy. It’s a thing. It’s a wonderful thing. 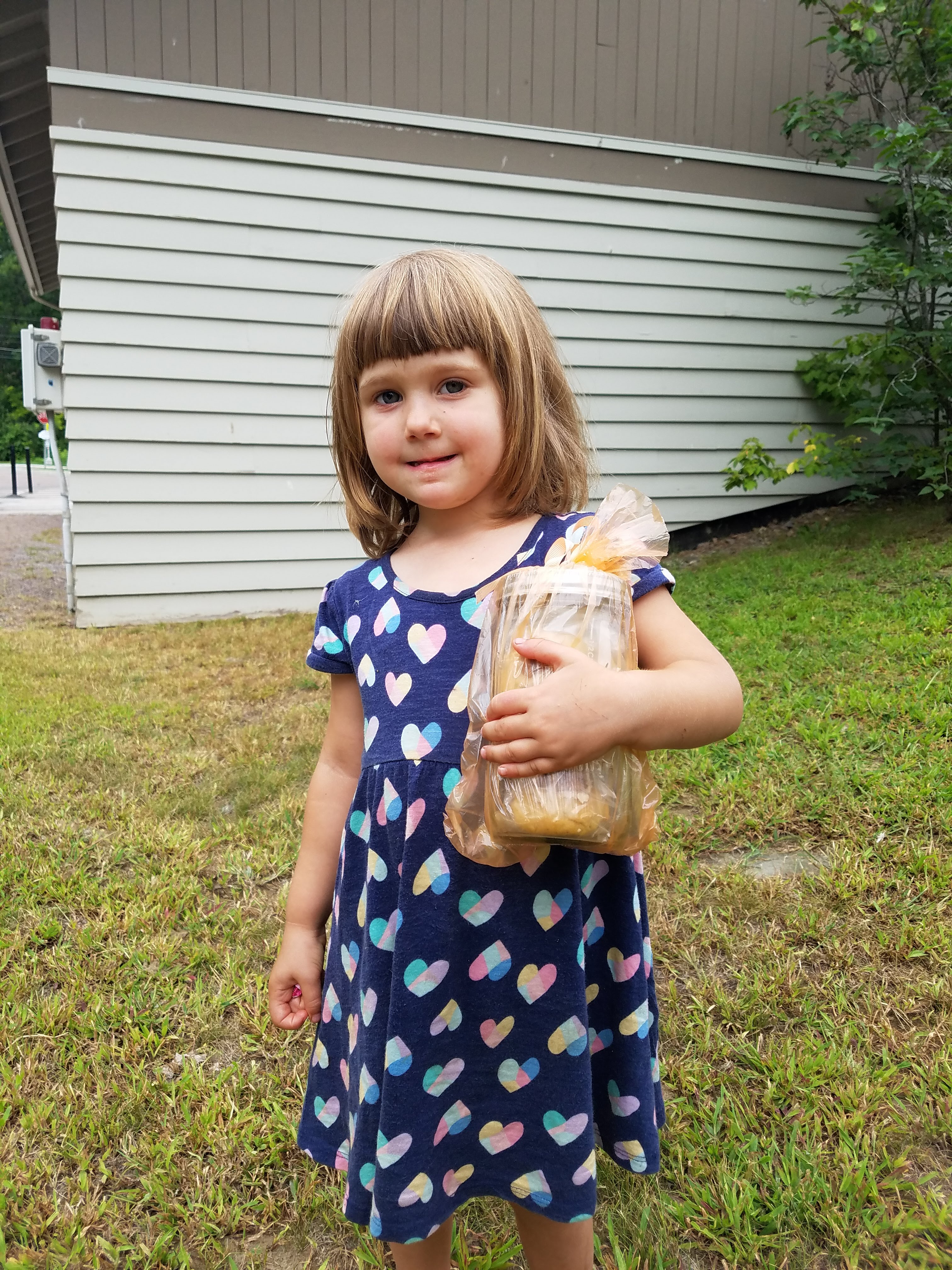 This is Eppie, who might not remember this jar of cookies, but I hope she will always give something back in a similarly beautiful way. I hope when she gets older, she meets a dear lady who becomes for her as Lyn has been for me.

This is Lyn. I want to tell you what she did to my stove. In my early twenties, our first house had an old electric stove in the kitchen that was, well, gross. It’s one thing to make a mess yourself and clean it imperfectly, but someone else’s mess, someone else’s baked-on spills, someone else’s goo dripping down that narrow space between the side of the stove and the counter – that is just gross.

The man we bought the house from had left a tea kettle sitting on the back burner, which succeeded in hiding the fact that there was no coil under it. Discovering the missing coil and realizing his deception was disappointment enough for me to have talked about it, and in telling the story, I must have mentioned that the stove was not exactly appealing in its present condition. I might have used the word gross. Lyn said to me, “I will come and clean your stove.” Being five months pregnant at the time, I did not argue.

Neither did I have any idea what she meant by “cleaning” my stove. She showed up in work clothes and over the course of two and a half days, she took that stove apart – screw by screw! She scrubbed and polished every piece individually, so that all old grossness of any kind that might have remained lodged between two pieces was able to be removed. Then she put it all back together.

I never saw a person clean anything so thoroughly, to say nothing giving two and a half days of their own time to do it. The stove was an ugly color, that goldish tone that was popular in the 1970s and remained in many kitchens until those stoves one by one kicked the bucket. But despite the (soon replaced) missing coil, it worked, and I was not going to have a new one any time soon. By the time Lyn got through with it, that stove was shining like new and not nearly as ugly. In fact, I could not help but smile when I looked at it. I remember being awestruck at her willingness to ensure that I would have a clean stove.

What a gift she gave me! Who was I that she would do this for me? Why she would go out of her way and work so hard for me like that? And how could saying “thank you” even come close to expressing my gratitude? In my twenty-something, bumbling way I asked her, “What can I ever do to repay you?”

She didn’t miss a beat, but replied gently, “Someday, someone will need their stove cleaned. You clean their stove, and you have repaid me.”

I like to think that anyone would have realized at that moment what an extraordinary human being she is. I did think that. But my thought specifically was – and still is – “When I grow up, I want to be like her.”

It wasn’t just the stove of course. It was cookies coming to me or coming back to me, time and again. It was hours spent listening to me working my way verbally through some perplexing issue or current crisis. It was a lot of kind questions that made me think she genuinely cared about me, though I still didn’t know why she would. Her amazing generosity and warm welcomes were love in action and made me feel loved, to say nothing of her maple cookies, apple squares and buttery turnips! Lyn made the best turnips I ever had! One Christmas after moving to Virginia I was feeling especially homesick for Vermont, which perhaps she knew and perhaps she didn’t. She kindly sent a box of her apple squares, wrapped well for the journey. But to fill the small bit of empty space in the box she did not use Styrofoam peanuts or newspaper. No, she thought to cut some sprigs of a fir tree so that when I opened the box, the pine scent brought me back to Vermont instantly.

I could go on, but perhaps you get the idea that I love and admire her very much. May every woman have such a woman in her life! May every man have a man so worthy and respectable as to inspire the same kind of hope, the kind that says I want to be like that someday! The vision of that someday will stop us short when we are tempted to be lazy or unkind or bad-tempered. The vision inspires. Like the ripples in a pond, the actions of people like Lyn inspire our own actions which hopefully in turn inspire someone else’s actions. In a few years when I show Eppie the photo of herself with the jar of cookies, I’ll tell her what it’s all about. Maybe she’ll get it. Or maybe someone will clean her stove, so to speak.

May we all have people in our lives to admire, to emulate, to learn from – people of such shining, wonderful character that your own life is richer just knowing them. Let us never forget how important we are to one another, how important our actions are and how far the ripples reach.

2 thoughts on “When I Grow Up”