Some things ask to be done, and it’s best to just do it. I had not planned to make pickles this week, but it’s the middle of the summer and five more cucumbers in the garden were ready to be picked (with more to come!) and there were already nine in the fridge, so it was time.

I started with 14 cucumbers, sliced them up and layered them with salt in my big bowl (which is 7” high and 12” across the top). If you want to make these yourself, you let that sit about an hour. You could add sliced onions or green, yellow, red or orange peppers, or cauliflower cut up into florets, but I had so many cukes, I’m stopping there this time.

Part of cooking, part of life, is knowing where to draw the line.

In the end, back then, I knew it was time to walk away. Not run, not bolt. Just walk. The voice in my head – his voice in my head – guided me not only in what choice to make, but also in the best way to do this thing that had to be done. Funny, the song doesn’t tell you what to do. It just tells you there are choices and you have to pick one. You can’t waffle, and you can’t pick them all. You think it through, you pick a route and you take it. It leads to new scenery and new experiences that you would not have on another route.

I picked the route tonight that included 14 cucumbers and it led me to nine jars of pickles! I made the dog happy too. Within seconds of opening fridge and beginning to bring the cucumbers out, she was out of her sound sleep, off the couch and at my feet. She LOVES cucumbers!

Carrots too, in case you’re wondering, and the heel of the romaine lettuce head, and peppers (the guts or the outside part with skin that we eat), and watermelon!

But we are on pickle-making now: Here are my cut-up cukes, resting, sweating (the salt will cause them to do that, really), relishing (hehe) their final unpickled moments.

As soon as I am not being distracted by how many cucumber chips a small black pug can eat, or watching her adorable begging, I go get my jars. Everyone has a cabinet with jars in it, right? Mine contains the ones I’ve been saving because they are just too pretty to put in the recycle bin. Or too potentially useful down the road. If you have not been doing this, you might have to buy mason jars, which are great also, but if you had been saving jars all along…

You laugh, but jars come in very handy. You just ask the 35 or 40 jars in my basement how useful they have been, how many times they have been called to action, how integral to the operation they are, how versatile, how easy to clean, how good looking – the list goes on. If jars had feelings, mine would feel good!

Make sure your jars are clean, inside and out, and that the lids are good. By good I mean they have that rubbery ring along the inside edge which provides the seal. I keep my pickles in the fridge, and I give them away, so I am content with this kind of seal. The yummy pickles are not going to last that long.

While the cukes are sitting with the salt, and once you have your jars clean and ready, you can prepare the brine. I like a sweet-sour taste, also called bread and butter pickles. The brine is basically vinegar and sugar and spices. You can put together your own combination of spices (recipes abound) or buy something called “pickling spice.” The one I got at Yoder’s includes mustard, allspice, coriander, cassia, ginger, peppercorns, cloves and bay leaves. I am happy with this one, but you might have particular flavors that you like or don’t like or want to include more of. That is the joy of cooking – you make it the way you like it!

The basic method is

The basic proportion is for every 3 cups of cukes/veggies, make a brine with 1 cup sugar, 1 ½ cups vinegar and about a teaspoon of pickling spice. Figure out how many cucumbers you have and do the math. I find the easiest thing is to let the cukes sit in the salt for an hour or so, then stuff them into the jars. Put as many as you can fit in there. That tells you how many cups of cukes you have, so it’s easier to do the math. Then measure out your vinegar, sugar and spices into the pot and turn on the flame. 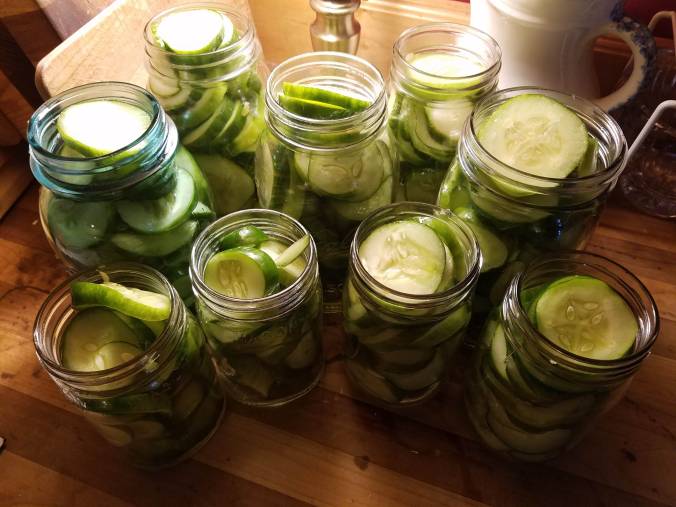 If you don’t have a garden or access to a farmer’s market, you can use cucumbers from the store just as well. I would use the European cukes because they simply wrap them in plastic instead of putting a waxy whatever on their skins. You don’t want that waxy stuff.

You can use brown or white sugar. A combination is good. With this batch I used up a bag of brown sugar that had gotten too hard. It dissolved in the vinegar over a flame just fine, but the proportion of brown to white sugar made my pickle brine darker than usual. If the amount of sugar seems too much for you, use less. The pickles will just be more sour and less sweet. It’s up to you. You can use white or cider or rice vinegar or a combination. The flavor you get — just like the scenery you see and the experiences you have! — comes from the choices you make. Have fun! Every time you make pickles, make them a little different. Why not?

Combine the sugar, vinegar and spices in a pot and bring it to a full boil (making sure the sugar is dissolved). The slight fuzziness you see in this photo is not blur. It’s steam rising from a fully boiling brine.

into the jars filled with cukes. Be careful. The jars are so full of sliced cucumbers, it could make a splashy mess otherwise, and still might.

Oops. It did make a mess. I poured too fast. Bother.

You can see that the pickling spice likes to collect at the top of the liquid. If you end up with a lot of the mustard seeds or whatever sitting on the topmost cucumber in the jar, you can spoon some of that off. You don’t want your pickles that spicy. Or maybe you do?

As each jar is filled, use a damp cloth to clean the outside of the jar and around the rim where the lid will seal against the glass. Put the lid on and set aside. Keep going until you have filled and closed up all your jars. Set the jars in a nice place and take a picture of your collection to show your friends! When they are cool, put them in the fridge.