Until recently I had never had roosters before. I had hens, only hens, and they gave me eggs. That’s all I wanted, that’s all I got. I was happy and the hens were happy. A lot of people ask me: Don’t you need roosters to get eggs from hens? No. You need roosters if you want more little chicks (which I don’t). Hens lay eggs whether there is a rooster around or not. I prefer my eggs unfertilized, thank you.

I had always said I didn’t want roosters. This was because 1. My neighbor had them a few years ago and I could hear their annoying crowing all day long, all the way from his coop, which is way farther than a stone’s throw from my house. It’s at least ten stones. 2. I don’t want a major chicken operation. All I want are eggs. Hens clucking softly works for me as a background noise. They are a bit of entertainment too. Watching chickens go to town on mealy worms makes me smile. Oh boy, mealy worms!

But all that time when I didn’t have roosters I wondered if I would change my mind if I actually had them. Would they somehow endear themselves to me? With this latest batch of 33 chicks, I had the chance to find out. (33, I know I’m crazy, you don’t have to remind me.)

It’s very hard to tell males from females when chicks first hatch. Hardly anyone can do it. You take your chances, and you don’t even really know for sure until you hear their crowing, which happens at about three months. Five of my birds started crowing a month or so ago. Three brahma roosters were “relocated,” one found his way back, leaving him plus two little (but loud) d’uccle roosters. Or so I thought.

It turns out there are other reasons not to want roosters. The crowing is, yes, every bit as obnoxious as I remembered. But roosters are also, shall we say, virile? Additionally, they want what they want regardless of how the hens feel about it. A rooster picks one pretty girl, chases her around the enclosure while she squawks like mad, and soon manages to have his way. It’s fast, and it’s the way of the world, but it riles up the hens. Understandably. I prefer a calmer flock.

Finally, someone answered my craigslist ad. God bless Pablo. Imagine that a person would drive more than an hour to come get a brahma rooster. He said he would come Saturday morning. Great!

First the Roundup. Let’s just say chickens don’t like to be captured. Perhaps there is a trick to this, but we are amateurs. The blurriness of the bird in this photo makes it clear that he is moving very fast to get away from Sandy. The job is harder than it looks.

Perseverance paid off, as it usually does. The brahma big boy was actually easier to nab. Look at the size of him! Before too long, three roosters were corralled and placed in the coop that they have been avoiding. The sliding egg door came in very handy. 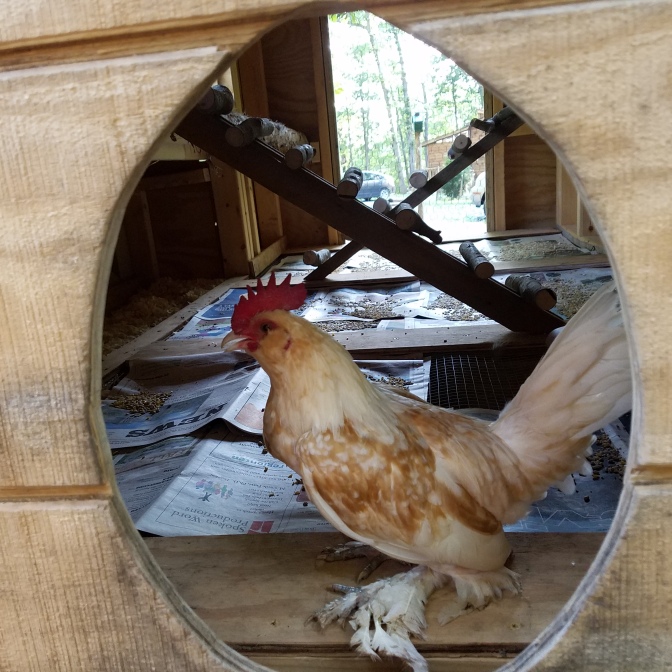 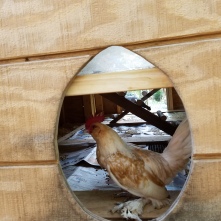 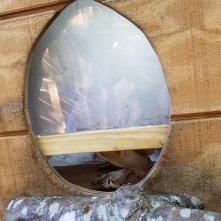 Trapped! Oh, I mean ready for pick-up. Pablo, where are you? 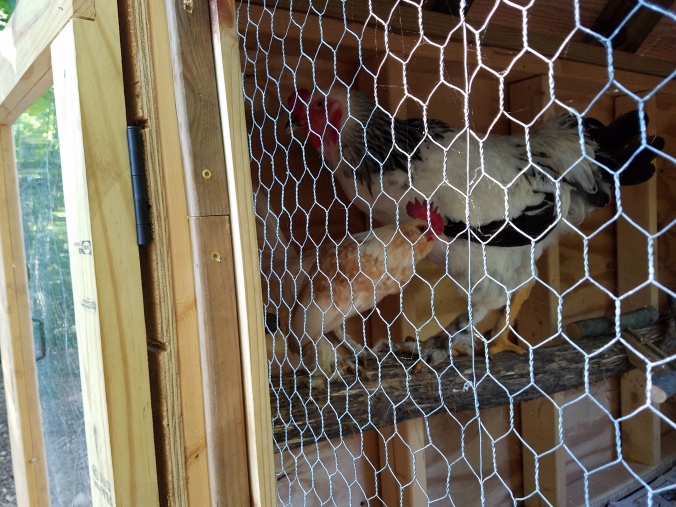 The roosters calmed down after they realized that the chase was over. So did we. Did I mention how happy I am that Pablo wants them?

What does he want them for? I had no idea, and I admit I didn’t care. You may recall the three general purposes for a rooster: dinner, lawn ornament and the fertilization of eggs. There is another and it is awful to think about: cockfighting. That people could get pleasure from this confounds me. If I let myself, I could even get angry about it, but I know you can’t stop all the evil in the world. Still, I didn’t want that to be my roosters’ fate. The only clue I got from Pablo as to his intentions was that he said he was coming with cages.

He also said he was coming in the morning and would let me know what time. In my world, the morning ends at noon. No Pablo by noon. No word from Pablo. Roosters were content in the coop, cluelessly awaiting their fate, but I was worried.

I breathed a great big sigh of relief when he drove in at about 230pm. His yellow truck did have cages in the bed – turned out he and his wife Andrea and their little boy had been to a chicken auction and already had some chickens in those cages. Pablo took one look at my brahma and said, “Whoa.” Yes, I know. He’s a big boy.

I breathed my second big sigh of relief when he told me he planned to use the roosters for stud. Andrea said she wondered if there were different strains of brahmas, big and small, because the brahma hens they had in the back of the truck were smaller than my brahma hens, and gigantic Mr. Brahma dwarfed them all. Thankfully size didn’t matter (you can save your size jokes). A brahma is a brahma after all and God bless Pablo for wanting mine.

The joyful transfer (joyful because I am soooo joyful that they are leaving) from my coop to their cages started with me getting into the coop with the roosters. What I will do to get rid of these birds! 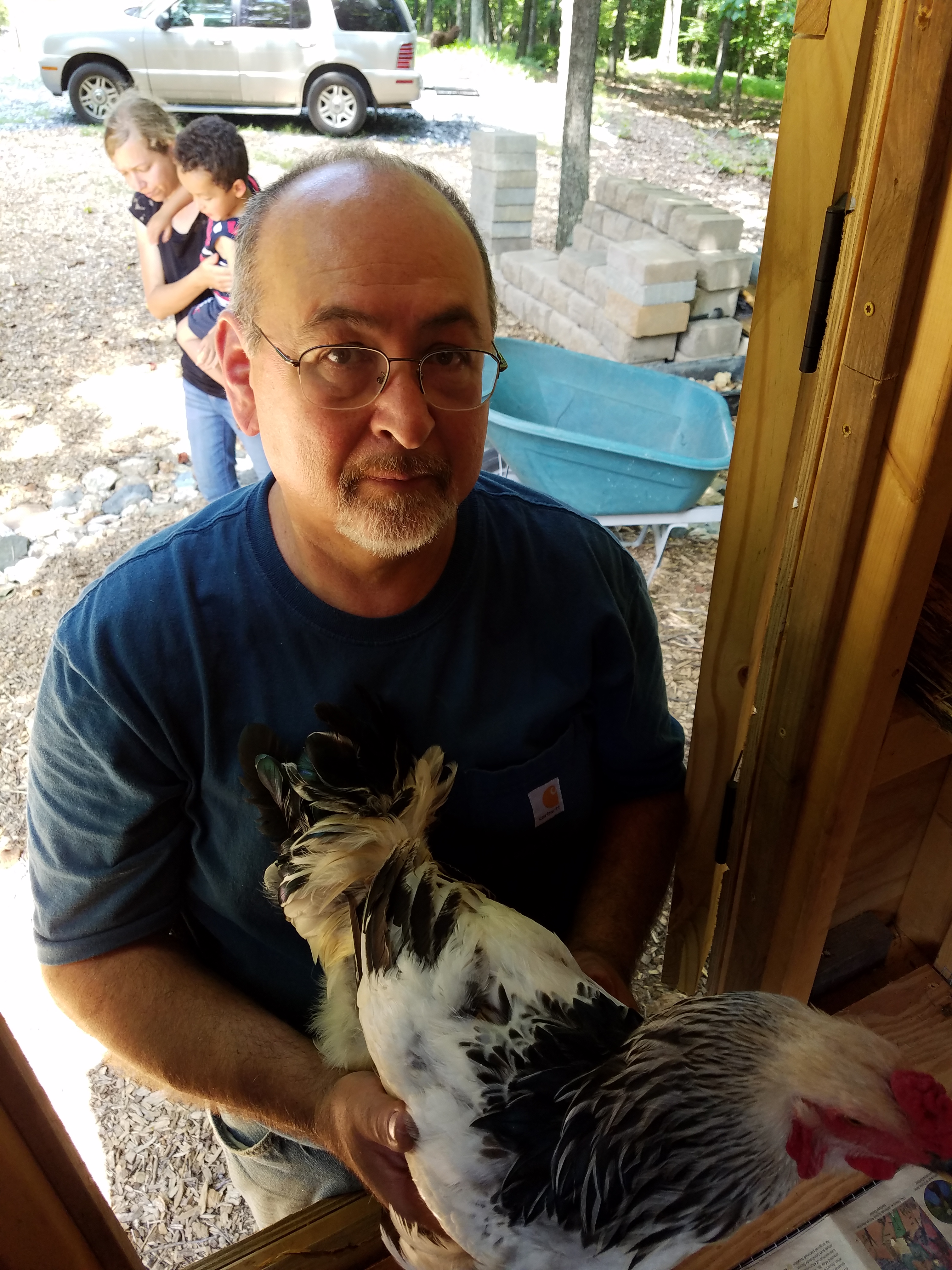 I was enough of a presence to make the birds run toward the door (make for the door! make for the door!) which Sandy blocked. He then got hold of them as they tried to get past. He turned them calmly around and handed them to Pablo. 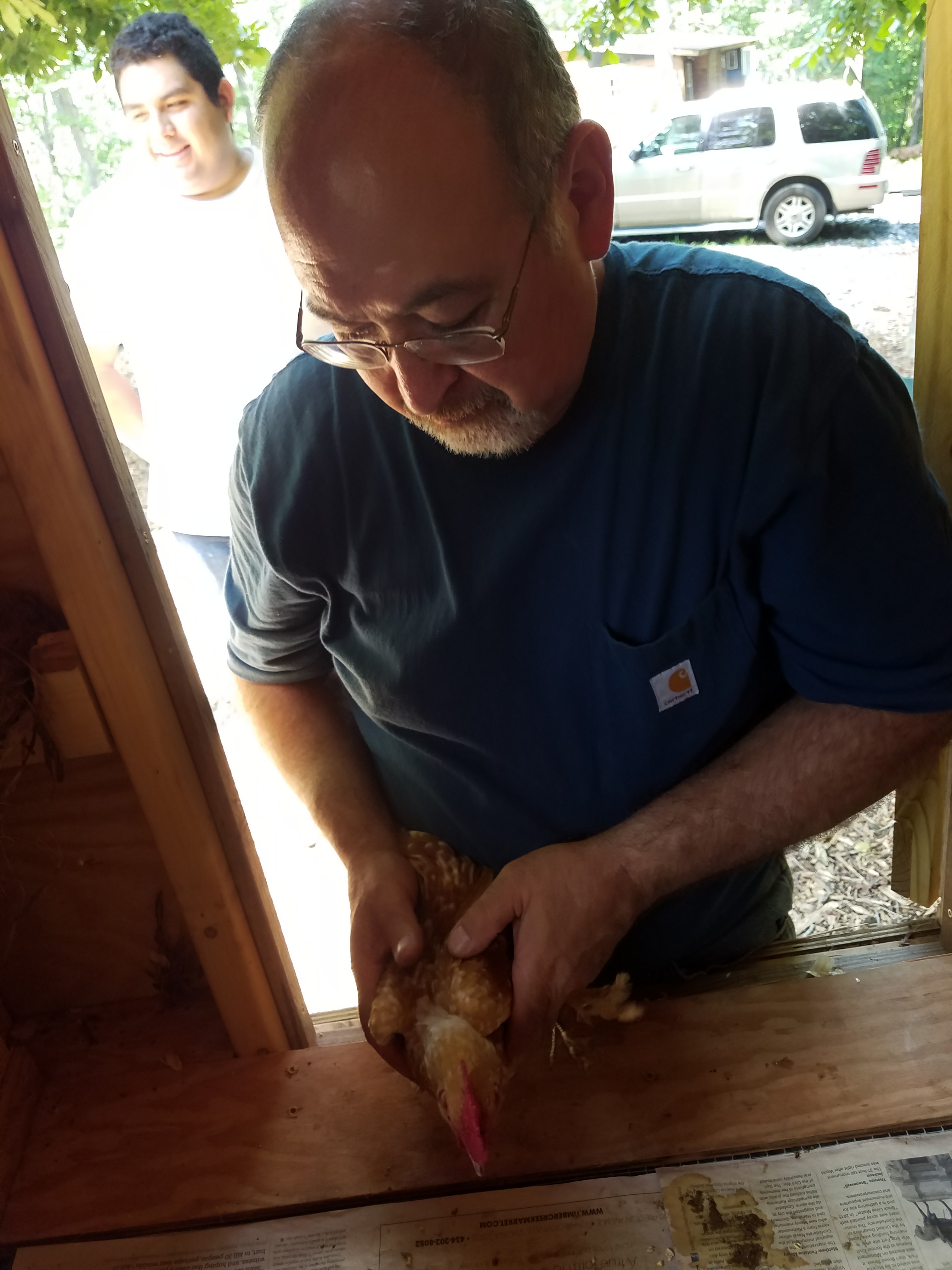 Pablo and Andrea and their son posed for me …

… just before that glorious moment when the third rooster joined the other two in Pablo’s cage. 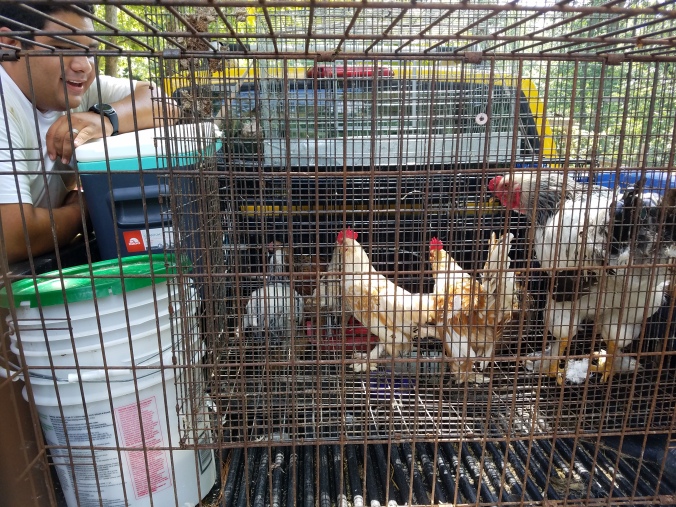 Happy smiles. Everyone is happy. All the humans anyway. No one is happier than I am!

A long time ago, a woman I knew said, “I don’t believe a thing will happen until it’s all over and I can speak about it in the past tense.”

Thus my moment of greatest joy: watching Pablo’s truck drive away with my roosters in the back, off to their new studly life. It’s over! The roosters are gone! Until Sunday morning. Say it isn’t so!

It is true. We missed one. I heard the incriminating crow early, before dawn, fainter and weaker than the d’uccles had been. How did we miss him?! Possibly the other roosters had drowned him out or intimidated him. With them gone, he was free to let loose. All right, it wasn’t so bad. Maybe I could get used to a little crowing…

But the rascal sealed his fate when he couldn’t help it and had to fast-chase a squawking hen around. Her racket got my attention while Sandy and I were moving plants in the late morning sun. I marched in there, caught him pronto (you are out of here, buddy!) and put him in the woods outside the enclosure. He soon walked back, curious to find himself on the other side of the fence from his beloved girls. Back and forth he walked along the outside of the enclosure. There must be a way back in…

I didn’t care. The image of him chasing an unwilling female meant I had no mercy at that point and would have relocated him to the bottom of the hill to be a fox’s lunch if I had not been so busy with the plants. But Sandy couldn’t stand it. He has a soft spot and hated to see this half silkie, half black copper maran become a snack. This rooster, despite his less-than-charming face,  has rather interesting features like blue ears and iridescent tail feathers. Sandy cornered him pretty easily and put him in the coop, away from the girls, awaiting a new life somewhere else.

3 thoughts on “The Departure of the Roosters”