When I was a kid, my mother used to say she loved gardening because after she got all dirty, she could get all clean. Going from very icky to fresh as a daisy is more thrilling than going from almost fresh to fresh. The same is true for weeding.

Weeding a bed that is overrun (why don’t we call it de-weeding?) has a different, greater level of satisfaction for the weeder once it is decent again. This morning did not turn out to include a train ride to DC and a day with friends as I had hoped, so at 7am I hit the strawberry bed. It was in great need. It was bad. Do you see strawberry plants in there among those rotten (but thriving!) tall things? See the spikey grass trying to get some sun? This photo doesn’t reveal the half of what was trying to crowd out my precious fruit-bearing plants. The following photo reveals even less, but I am trying to capture the scope of the situation. The strawberry bed is eight 8-foot fencepost-widths long, or about 64 feet.

Before it got too hot, I went to town on the mess. See all that fuzz toward the other end. That’s the really bad part.

While pulling out the Bad, I thought about a few parallels to human life.

The weeds weren’t there then (though now that I think of it I found numerous half-eaten berries out there when I picked them – surely the work of hungry squirrels). Why can’t the weeds just find somewhere else to grow? Why can’t the squirrels eat the gazillion other edible seeds and nuts on this property? Why can’t bad people leave good people alone?

2. The Bad tries to masquerade as the Good, tries to be a wolf in sheep’s clothing, tries to fool you as counterfeit among the genuine. The tall, overachiever weeds are obvious, as is the spikey grass, but hidden among the strawberry plants are various weeds trying to look like strawberry plants, trying to infiltrate and blend in – playing their can’t-catch-me game. They think I can’t tell the difference, but pretty doesn’t always win (some of the nasty ones are pretty – does that sound like real life or what?). I’m smarter than that, but they are robust intruders with determined roots that get a foothold in an area by wrapping their strong tentacle-like roots around the (supposed-to-be-there) strawberry roots. I am ruthless. However…

3. You don’t always get all the Bad out. See these horrid little roots? 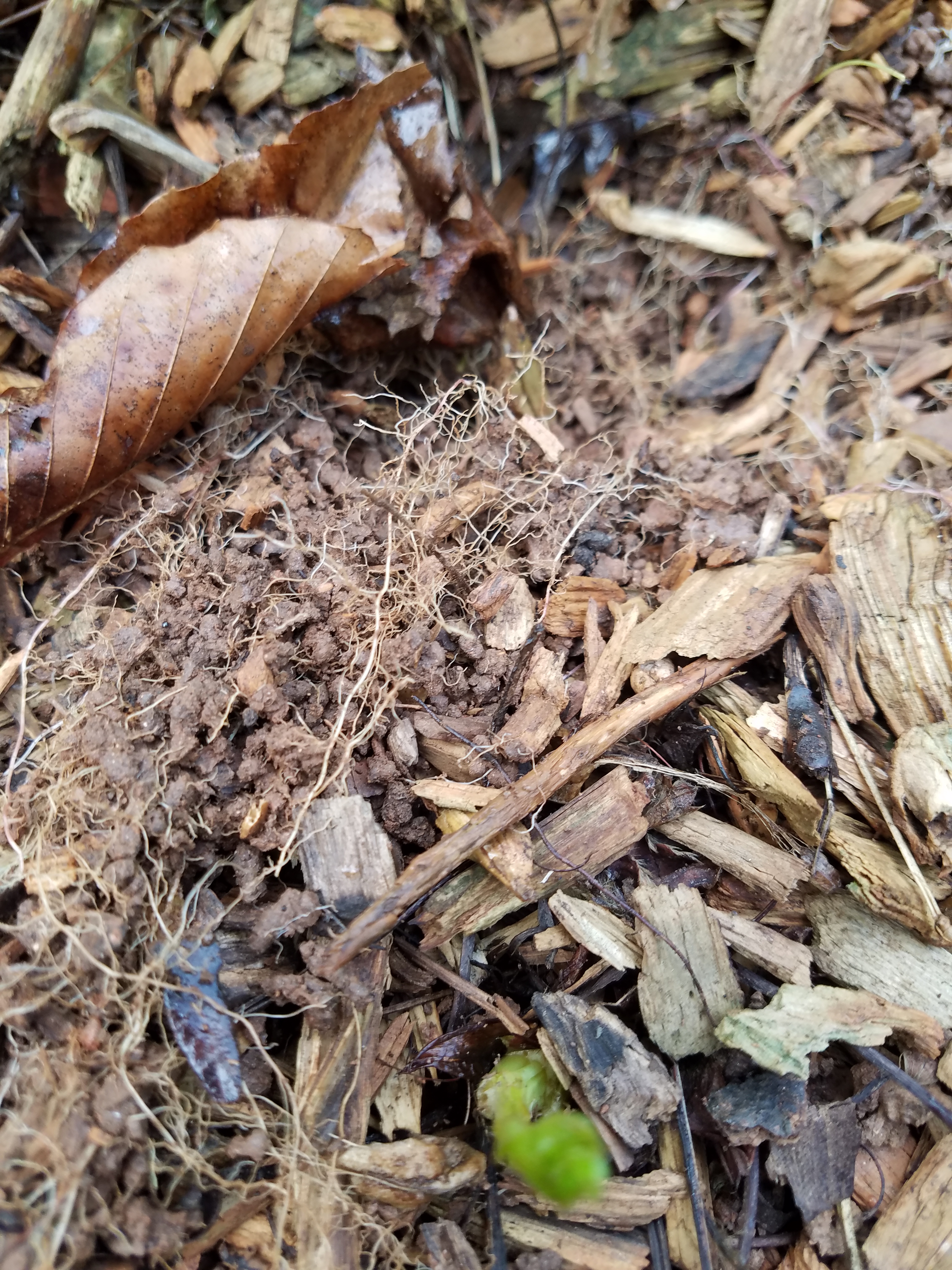 You can’t get all that. Insidious is the word. The next time they get water from rain or the sprinkler, they will begin to come to life once again, you can bet on it. They keep their agents hidden but ready to pounce at the first opportunity. Sound like anything else in this world?

But someone has to get the bad guys. Whether you are part of crime dramas in real life or you watch them on a screen in your living room, you notice that the detectives and the police have unrelenting obstacles and are perpetually short on time, facts and help. They bumble, they see false clues, they have their own issues that trip them up. Yet they are determined to expose the wrong, get the bad guys and make it right. They keep going. Our military, God bless them, also keep going despite the danger and setbacks. Strong fights strong. What if it didn’t? What if it just said We’ll never obliterate the Bad altogether so why try? But it is also true that…

4. You can’t save all the Good. Some of the good, healthy, wonderful strawberry plants ended up in the wheelbarrow because they were just too entwined with the Bad. In the bigger world, the innocent are often victims for lots of reasons, and you don’t have to look far for examples. Watched The Eichmann Show on Netflix last week – unspeakably horrendous. Follow the news every day and there are always new, sad images. But just because there will be loss, terrible, sorrowful loss sometimes, doesn’t mean you don’t do what you can. The Good has to keep going…

5. Let the exposed part lead you. With some of these weeds, especially where the situation at ground level is rather thick, I start where I can see and work my way down to the base. Then I pull. If you pull too soon, you just break it midway and that’s pointless — the thing will be back in no time. Same for our everyday. Take care of what you can see in front of you as best as you can, and then move on to the next thing. As you make headway, you can see what you couldn’t see before and you have some experience and can do a better job with the next thing. I like how Jordan Peterson puts it: “Clean up your room.” Clean up your own room before you start addressing the ills of the world at large. Do what’s in front of you first. If you can’t get a small thing under control, if you are inept at the small things, what makes you think you can tackle the big things? If you don’t get the weed you can see out of the way, the situation is overwhelming. One thing at a time.

Along the way, surely…

6. You sometimes encounter nice surprises. Some people would say this fellow is a pest and I should relocate him to the woods. I think he’s nice (to say nothing of funny-looking) and I don’t mind him a bit. For the most part my garden plants are in raised beds which he cannot possibly get to. Then again, maybe he is the one who left all the half-eaten (ground-level) strawberries behind! 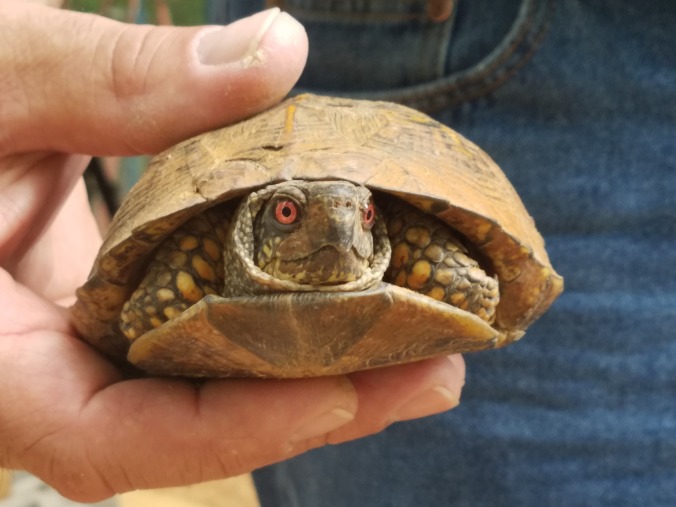 I went to the garden to weed the strawberry bed. I moved slowly from one end of the bed to the other, mostly on my knees, mostly looking down as the job requires. Sometimes though, you have to stand up to stretch or move to a new space, and then you see things from a different angle, you see the big picture a little better, you see things you didn’t realize were there.  Once when I stood up I saw that the lilies had opened! Just yesterday they were still preparing for their grand show. What a nice surprise! 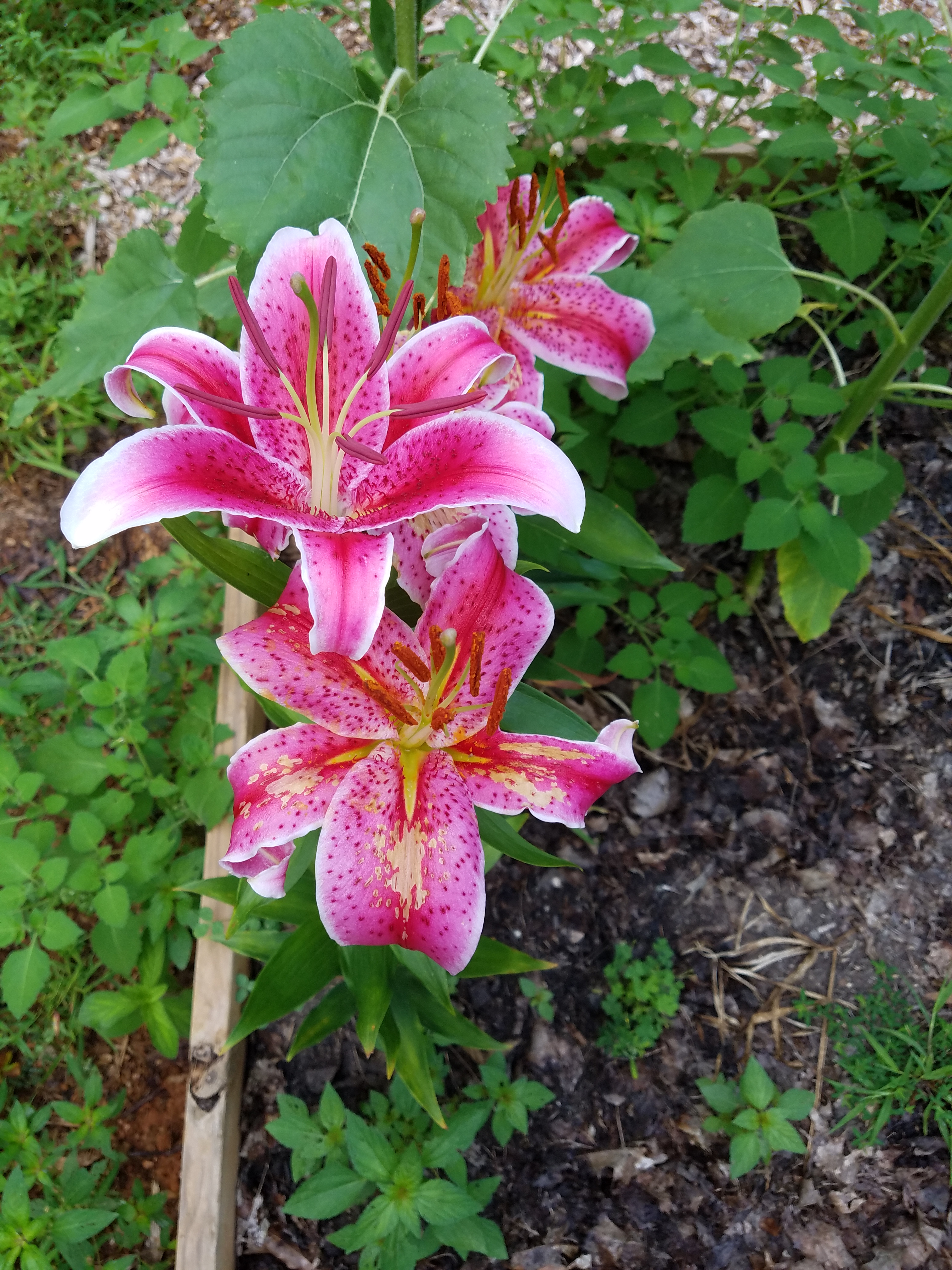 Do stand up and look at things from a different angle sometimes. It’s amazing what another perspective will reveal!

7. Reuse and recycle has all kinds of applications. What did I do with the wheelbarrow full of weeds? Gave it to the chickens! If the chickens could get in my garden (how they would love this!), they would eat a variety of greens – and mostly not the ones I want them to eat of course. But they do love greens. And they are discerning enough to pass by the less desirables. So I gave it all to them, and I expect they quickly found the good stuff, including forfeit strawberry plants, the ones that were growing in the path or too entangled with weeds. And they have something to play around with for a while. Maybe a worm or two got transferred as well. Happy, happy chickens! 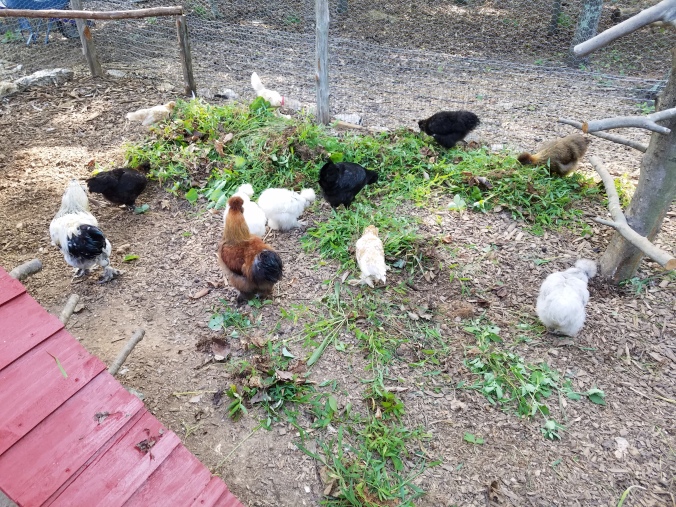 8. There’s a comedian in every bunch! As soon as I laid a towel down, Coco appeared out of nowhere. 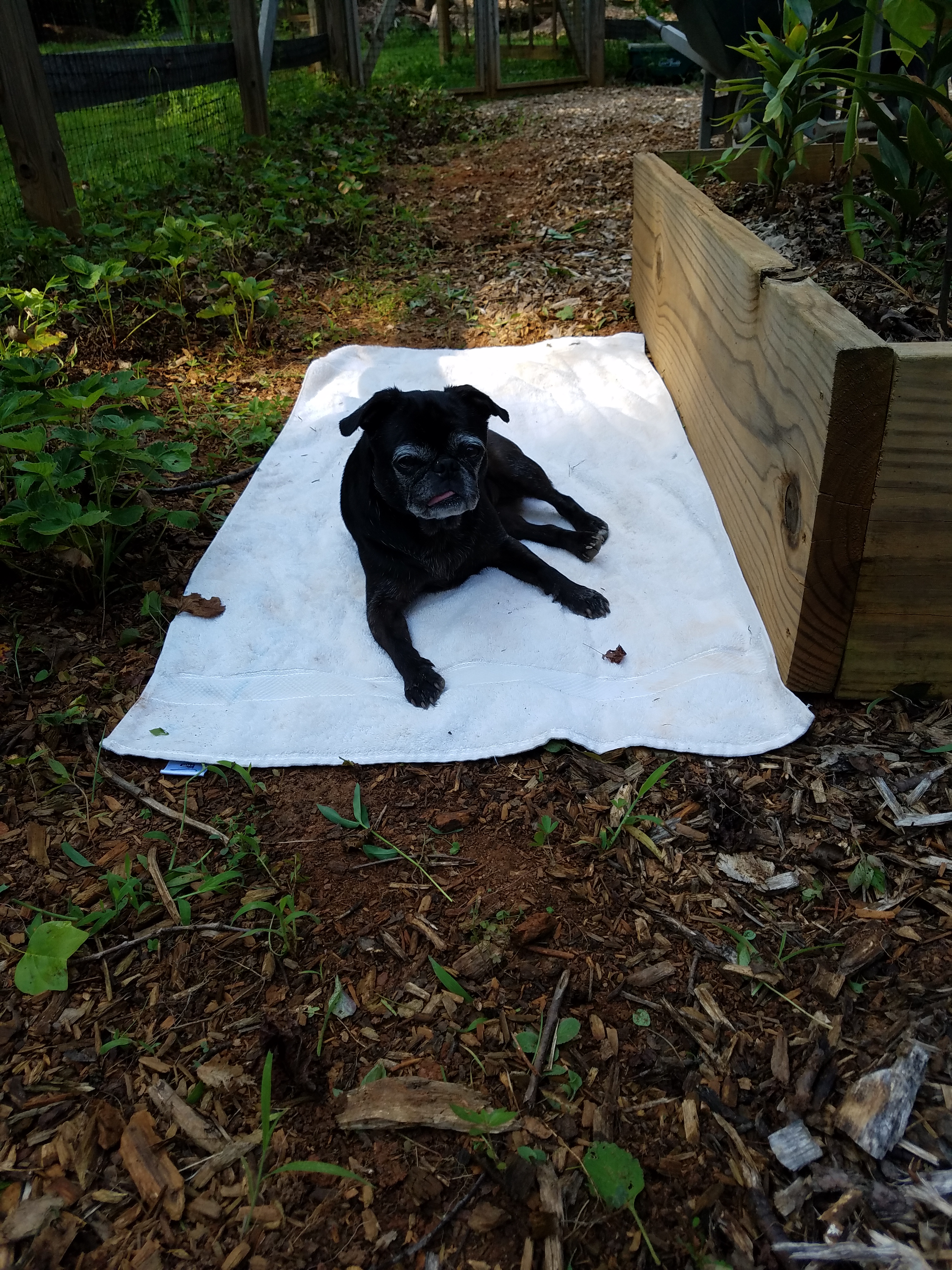 What? she says, Is there a problem here? I proceeded to lay out the rest of my cloths and she held her ground, snoozing happily away.

I said to myself, How long will she stay there? How much mulch does it take for her to get the idea to move? You tell me: 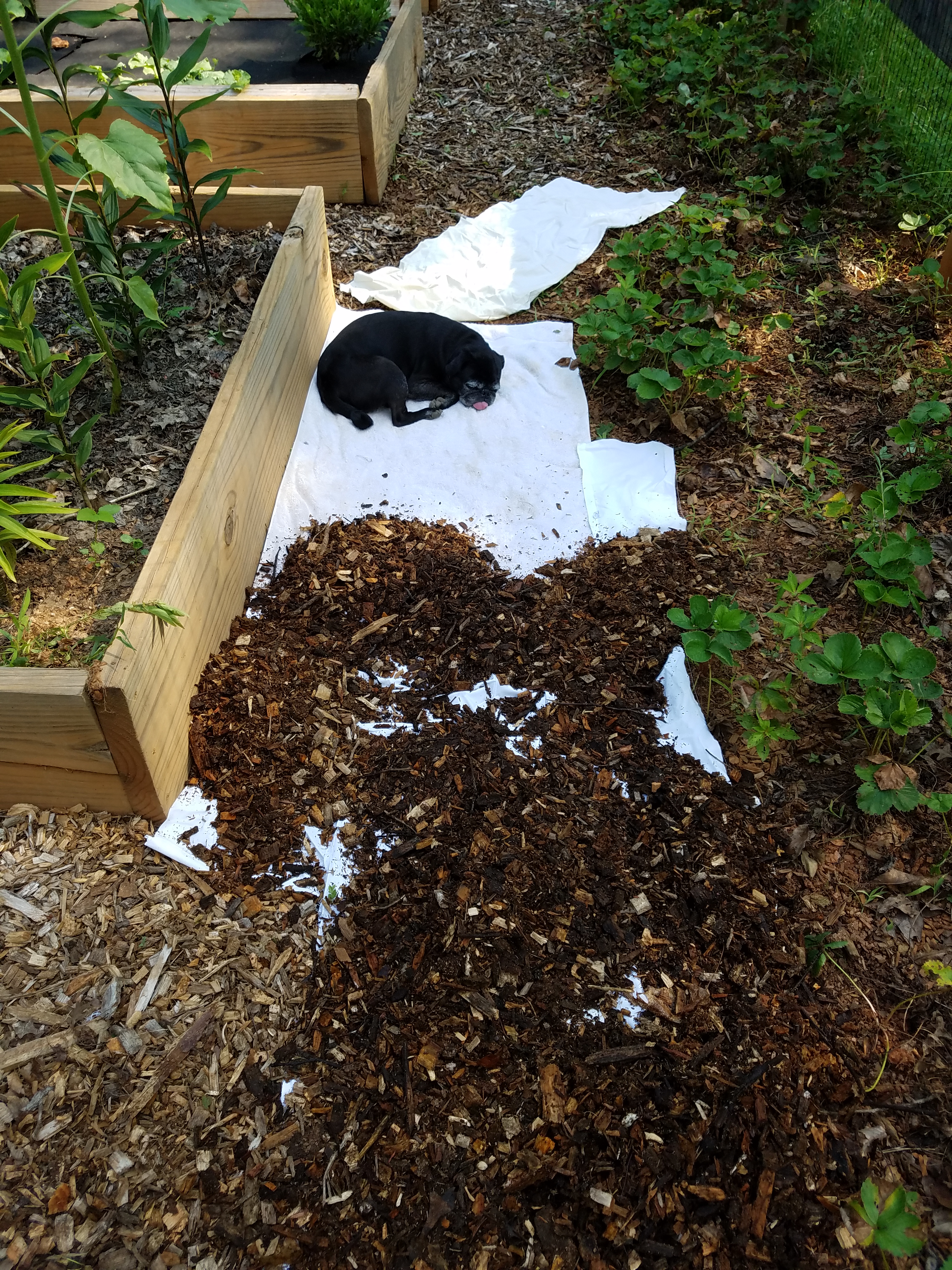 Fine, then she just moves over to the next bit of soft. There really is no choice, sweetie pie. You have to move.

Of course she finally did.

9. Sometimes you are the only one who sees the difference. I know that the world is not going to come to an end if I don’t get my strawberry bed weeded. But I’m glad it is, and it’s a far sight better than it was yesterday. P.S. The tall plants in the foreground are rhubarb. They do belong there.

2 thoughts on “Parallels in the Weed World”