It was not the original plan to make monkey bread this morning. I have never even made it before. Other than having seen it (though not purchased it) at Vive la Tarte yesterday, I only vaguely even heard of it. Having only random fragments in my mind about a thing, disconnected from personal experience, generally would not translate into Let’s Make That Thing.

But if you had seen the monkey bread yesterday, you might be motivated to try it too. This is what we saw.

You have small chunks of dough individually coated with cinnamon, sugar and butter all baked together into one multi-chunk, sweet treat.

Drew and Nicole and I had started talking about the buttery, sweet, cinnamony goodness of monkey bread, and I said to myself: It Can’t Be That Hard.

Suddenly there we were with a plan. Early morning grocery run for yeast, butter and other essentials followed by fun in the kitchen. Meet at 8, eat by about 10, right?

Oh, dear. Jet lag is real, and I still have it. Every morning since I got to the west coast I have woken up by about 4am. Thinking about the monkey bread project, I was allowing two hours for all of the following: a four-block walk to the store, shopping, walk back, prep of dough, rising of dough, assembly of sweetened dough chunks into muffin tins, re-rising of dough and baking – all to make something I have not made before and in somebody else’s kitchen! Yeah, I was way off. Can I blame this on jet lag?

All to say, the idea-to-results sequence took way longer than anticipated. Nonetheless, we would have our monkey bread.

When you have never made something before, it’s a good idea to have a good recipe. I read a few online. They were all different, but basically we’re talking about a sweet, soft dough that is smothered in butter, sugar and cinnamon and baked into delicate, pull-apart, heavenly rolls. I have a great recipe for soft dinner rolls. Add the sweet element and that should work, I thought. It was going to be, shall we say… experimental. Thankfully my sister Lynn came to the rescue. She is a great cook, has made monkey bread many times and gladly sent me her recipe. See below.

I had no doubt that this was the best plan. And perhaps if I had followed the instructions, these would have been even better than they were.

You read that right: IF I had followed instructions…

Let me back up. I love my phone. I think smart phones are amazing. But one downside is that they are very small. I opened up the recipe on my phone and it was really hard to read. I did not have a printer or a larger screen. My eyes aren’t that good. Then you set the phone down to do the next thing, and by the time you do that next thing, the screen has gone black. You open it again, get to the download again, try to read the tiny writing again. It was problematic. I know I got the ingredients right, but why I thought to put the brown sugar in with the melted butter in preparation for rolling the dough balls, I am unsure.

This was my deviation, putting the brown sugar into the melted butter. Then Drew added the cinnamon and I got to stirring. 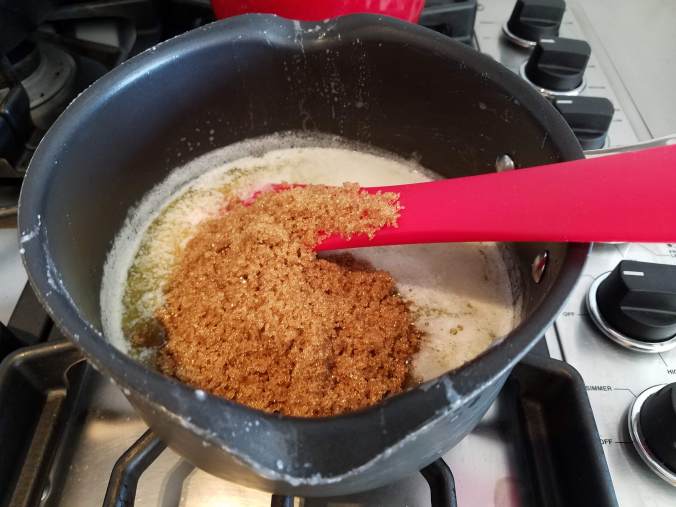 I actually got quite excited about how beautiful the sugar and cinnamon looked as I was swirling it in there with the butter. That’s about the time I got a flashback to the actual words of the recipe which was something to the effect of “Dip the dough balls in butter, then roll in the sugar/cinnamon mixture.” Oops.

I did most everything right, I promise. The dough was soft and elastic.

I covered it and let it rest.

I buttered the muffin tins. Lynn’s recipe says to use a bundt pan, but I wanted ours to be like Vive la Tarte’s, so I used muffin tins. See all the pieces of butter waiting to coat the inside of each cup?

I cut the dough up into pieces and formed little irregular balls.

and put them in the cups of the muffin tins

until they were all in. 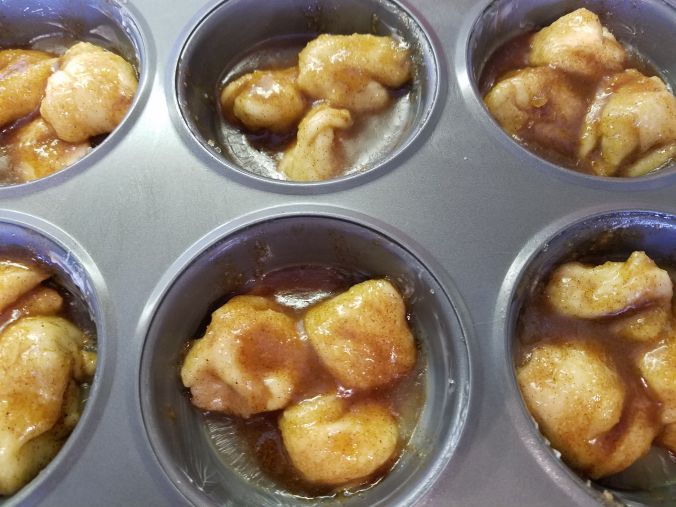 Baked, like this. We had waited so long by this time. It was long past when we had had the rest of the brunch we’d planned. I didn’t take the time to put powdered sugar or a glaze on top. 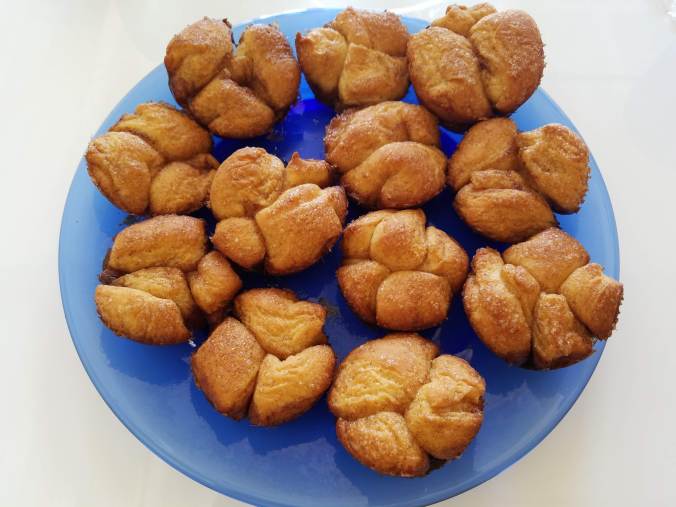 Still, they pulled apart like nothing. The dough was soft as a pillow. The sweetness surrounding the dough was divine (seemingly none the worse for having been done wrong). If I had sprinkled powdered sugar on this plate, or put the suggested glaze on them, it would have looked better, but hot out of the oven Drew and Nicole loved them. Loved them. Do wait a few minutes until they are not quite so hot but still warm. Yes, do eat them warm out of the oven.

Still, I was not perfectly happy with them and will try again another time. I think more balls per cup would be better. Letting them raise longer would have been better (we were in a hurry to get to the Exploratorium so I rushed that part). Following instructions about the butter-dipping and sugar-rolling might have been better (not sure, that part seemed okay).

It isn’t every day you have pizza for breakfast. It isn’t every day your breakfast pizza includes an egg. I want to think that the eggs on our breakfast pizza today came from chickens as happy as mine at home in Virginia, but of this I cannot be sure. Regardless, this breakfast pizza with its bacon, egg and shallots, was (note past tense) an excellent way to start a Saturday in San Francisco. It was absolutely the perfect balance of its three simple toppings on a soft-on-the-inside, crisp-on-the-outside, bread-like crust. What else can you say but Oh yum!?

The full pan of them looked like this. Drew told me that by 11am, these, and all the delectables you see below, will be gone, disappeared into the happy stomachs of Vive la Tarte’s customers. Notice they don’t call it breakfast pizza. I think they should. Drew did.

Vive la Tarte is one of those places you hope the residents of this city are very grateful for.  It’s popular for good reason — its food shares the same basic descriptors as most good foods, the most important descriptors: simple and delicious. You know you have come to a wonderful place when you want to eat one of every single thing they offer. I’m talking croissants, 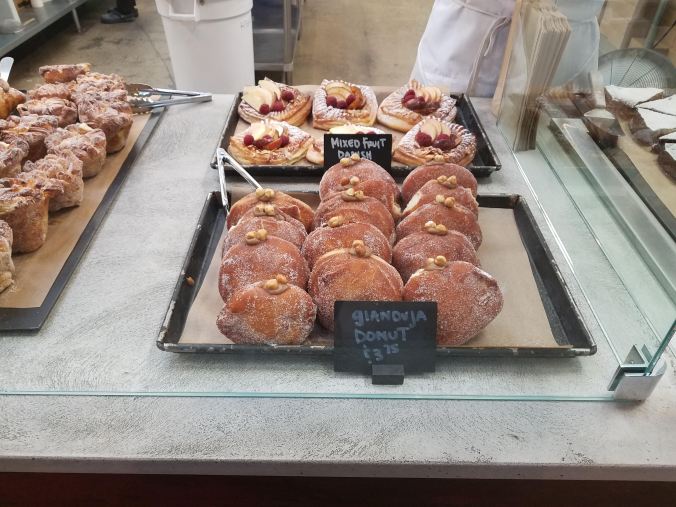 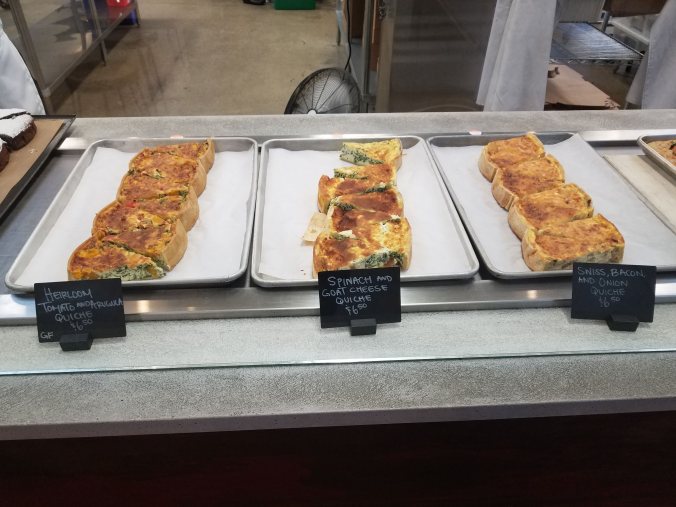 and the pizza, which was at the end of the line and became mine because walking through the line again would not have made it any easier to choose.

Seeing all of these wonders makes me want to bake more at home, to play around with different ingredients. That middle quiche has goat cheese in it. Why didn’t I ever think to put goat cheese in mine? And monkey bread – what’s monkey bread? Think pieces of soft bread dough baked together with cinnamon, sugar and butter in such a way that the adjectives to describe it include: soft, sweet, gooey, sticky, golden, cinnamon, buttery and last but not least sinful.

From the outside, Vive la Tarte doesn’t look like much.That large open space on the right, that’s called the sunroom. It was too cloudy a morning for me to attest as to any sun that might on a different day stream in there, but if they want to call it the sunroom, so shall it be. There’s an opening within the sunroom that leads into the restaurant, besides a main entrance. See the sandwich board outside the main entrance?

As you are walking down Howard Street, that’s your indicator. This is the place to be. 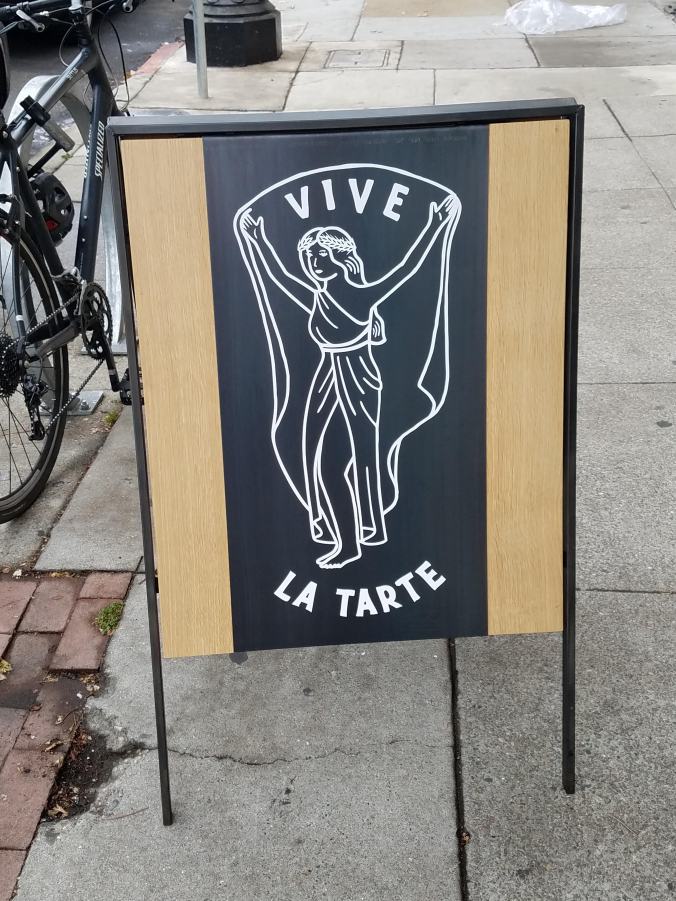 The same simple block-lettered name in the window identifies the bakery. Look elsewhere for fancy. 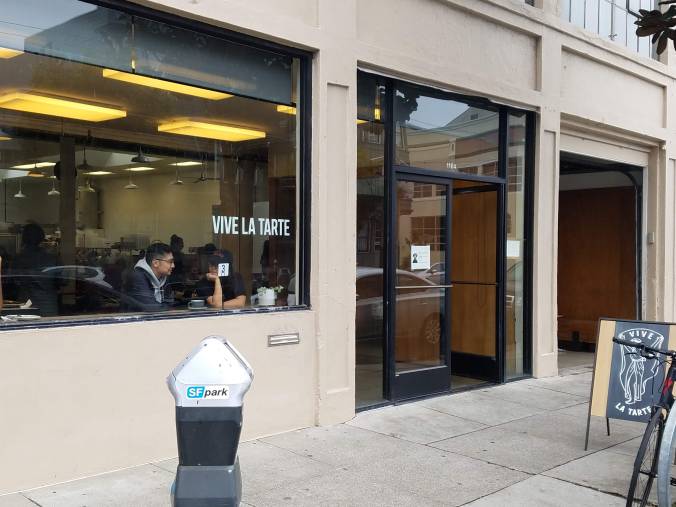 Two simple signs hang in the windows. One has the basics.

Not to worry if you have your dog with you. That open garage door, a.k.a. the sunroom, is indoor-outdoor space is just for you and your dog. No takers while we were there.

You have real spoons for measuring your sugar out of a glass jar (and for stirring), a cup to put the dirty spoon in, ceramic cups and real glasses to drink from and a helpful staff to get you anything you need that you don’t see.

After I finished my pizza and tea (which I grant does not, without context, sound like a good combo but you know what my pizza looked like), I stood back and took the whole scene in. It’s huge and wide open.

The kitchen is in full view as you approach the counter. I like when you can see what they are doing.

I watched the lady banging her huge whisk to get most of the meringue off it. It’s a quantity of meringue that is inconceivable in a home kitchen, but oh how delightful a dollop of it is on a lemon tarte. Meringue is a kind of free-form marshmallow fluff, a simple mix of egg whites and sugar beat up till it’s fluffy as a cloud. Oh, the incredible ways people have come up with to make food so delicious!

I wish I could come here for breakfast every day.

If I did, at least two things would happen that I don’t want to happen.

1. Vive la Tarte wouldn’t be special any more. It would be normal, every-day-ish, and I want places like this to always be special to me. (Once a week maybe I could live with though…!)

2. I would not be incentivized to play in my own kitchen or somebody else’s, which a visit here has very much made me want to do. For starters, monkey bread… So guess what we are going to do tomorrow in Drew and Nicole’s kitchen! I’ll let you know how it comes out 😊