We all know someone like Edward: stuck up, conceited, vain, smug, no thought whatsoever for the well being of anyone else. People like this don’t necessarily hurt anyone, they just ignore, push away and take for granted the love and the goodness that comes to them. They get sulky when they don’t get their own way. Their self-importance rules the day.

Comeuppance comes to mind, as in One of these days, he’ll get his comeuppance for treating people so arrogantly, which is Merriam-Webster’s example sentence for a word defined as “a deserved rebuke or penalty.”

But what if people who deserved it didn’t get only their comeuppance? What if their rebuke or penalty were also transformative? What if comeuppance did a kind of magic, and people became better people?

It happens. It happened with Edward Tulane. And if it can happen with a rabbit, it can happen with anyone. Right, Edward is a rabbit, a fancy toy rabbit in a wonderful children’s story I just discovered. Brad and Beth and Piper and Zoe and I went to a stage production of the 2006 book by Kate DCamillo at the Seattle Children’s Theatre. The purplish guy in the middle with the long ears – that’s Edward.

In The Miraculous Journey of Edward Tulane* a china rabbit, though unable to move on his own or communicate with those who take care of him, can nonetheless think and feel. Edward was as full of Self as a china rabbit from a posh toy store leading a cushy, swank life in Paris can be. The little girl who loved him, Abilene, dressed him every morning with yet another outfit from his extraordinary wardrobe. He “never ceased to be amazed at his own fineness.” Abilene propped him carefully on a chair every day before leaving for school and assured him, “I will come home for you.” She loved loving him, though he cared absolutely nothing for it.

Abilene’s wise grandmother Pellegrina told her a story one night about a princess who was loved dearly but loved no one in return. “You disappoint me,” the witch in the story told the princess, after which she turned her into a warthog. Before Pellegrina left, she tucked Edward in and said the same words to him: “You disappoint me.”

The rabbit’s journey of redemption began where his self-obsession ended. He went with the family an ocean voyage and – oops! – was tossed overboard by some miscreants who had first stripped him of his finery. The last thing he saw was Abilene standing on the deck, holding up his gold pocket watch and shouting to him to come back. (Illustrations by Bagram Ibatoulline) 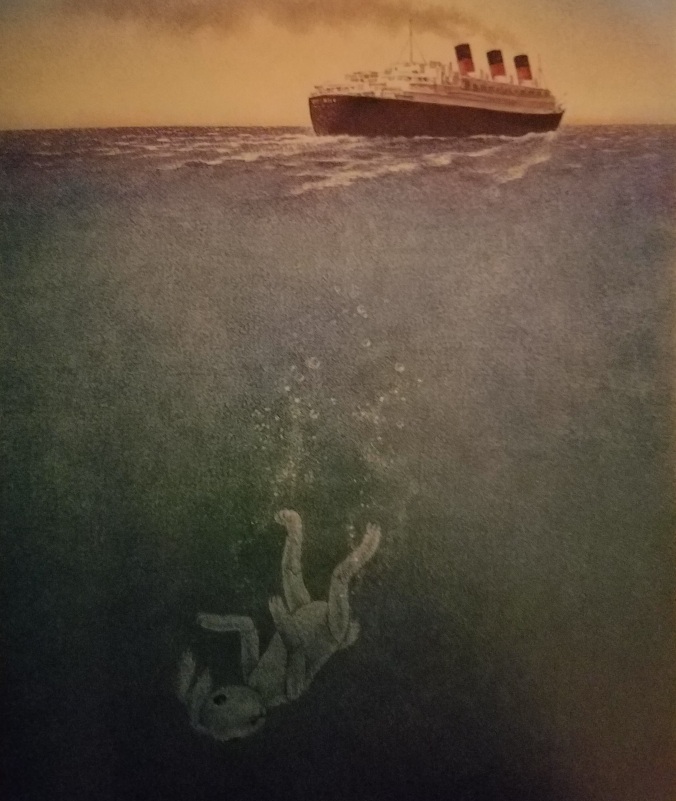 Imagine Edward’s new life, face-down on the bottom of the ocean. Forget the silk pajamas. Forget admiring his own reflection in the glass. He was humiliated and upset, but stuck. One day a storm churned up the water and he was lifted high enough to land in a fisherman’s net. Lawrence kindly brought Edward home to his lonely wife Nellie, whose immeasurable sadness was brightened a thousand-fold by having this inanimate rabbit in her care. Edward scoffed when she put a plain dress on him and called him Susanna, but Nellie was gentle and told him stories, some of them very sad. The fisherman showed him the stars at night.

But what does it look like when someone fawns over a toy rabbit? Nellie’s daughter couldn’t stand the talk in town, so when she found her moment she secretly snatched Edward and pushed him face-down into a garbage can – yet another humiliation for him. But being separated from Lawrence and Nellie made his heart pang for the first time.

The town dump was worse than the bottom of the sea. Talk about stink! A dog named Lucy found Edward in the rubbish and presented him to Bull, the hobo he was traveling with. The threesome then spent happy years riding the rails and sleeping under the stars – Edward does love the stars! Bull passed the hours telling Edward stories of the family he left behind to find work, and a lot of other hobos likewise found consolation in sharing their woes. Edward added Bull and Lucy to the names of the people who loved him, and he repeated the names over and over as he stared up at the stars at night: Abilene, Lawrence, Nellie, Bull, Lucy.

Their quiet, nomadic life ended abruptly when an angry conductor threw Edward off a moving train. Once again he was alone, hopeless and helpless, primed for the next humiliation: the woman who picked him up thought he’d make a good scarecrow. The nasty crows incessantly attacked him, but Edward’s journey did not end there.

Where there is a need and a kind heart, good will happen. Bryce, a young boy who worked in the garden, repurposed Edward, giving him to his frail and sickly sister, Sarah Ruth, who loved him deeply as she got weaker and weaker. Their abusive father created a fearful situation, and Edward understood more and more how important he was to the children, how much power there is in this thing called love.

After Sarah Ruth died, Bryce took Edward with him to Memphis, where he outfitted him as a marionette puppet. Together they earned a bit of money for food. But not enough. The owner of a diner got angry with Bryce when he couldn’t pay fully and smashed the rabbit’s china face. Reluctantly, Bryce brought Edward to a toy repair shop and left him there.

Restored to a semblance of his former glory, Edward resolutely sat on a shelf, determined not to open his heart again. You know how painful it is to lose someone you love.

Someone came for that doll but no one came for Edward, and he sat alone with his shut-up heart. Another doll, this one very old, thought it was dreadful that he didn’t care if anyone came for him. “I am done with being loved,” Edward told her. “I’m done with loving. It’s too painful.”

“You disappoint me,” she said. “You disappoint me greatly. If you have no intention of loving or being loved, then the whole journey is pointless.” After a little girl came and took the old doll to her new, loving home, Edward heard the doll’s voice inside his head over and over: “Open your heart. Someone will come. Someone will come for you. But first you must open your heart.”

Little by little, as he sat there through countless long and lonely seasons, softening happened. One day a mother and daughter came into the shop. The little girl took Edward from his shelf and “held him in the same ferocious, tender way Sarah Ruth had held him.” That’s when he saw what at first looked like a locket around the lady’s neck. But no, it wasn’t a locket. It was a pocket watch, the one that had been his many years earlier. Abilene looked into Edward’s eyes and knew him. She and her daughter took the rabbit home.

Edward’s journey included generous portions of love and tenderness and pain and sorrow. Step by step, little by little, these helped him shed his vanity, become a little wiser and learn to love.

May we too, all of us, make room in our hearts for love. May we find, deep within ourselves, love we didn’t know we had. Most importantly, may we pour forth that love to those who need it and who, in their own way, give their own love to us.

*The Miraculous Journey of Edward Tulane by Kate DCamillo, illustrated by Bagram Ibatoulline