It’s wonderful how a garden is never quite finished. There are always parts you didn’t get to yet, but also, the seasons are always changing and requiring you to pay different kinds of attention to different aspects of your enterprise. In this way, a garden is like your life, like your character, like your friendships. You do what you can, you always see the shortcomings and challenges (if you are honest), and you are always trying to make it better.

My ten acres is mostly untended forest. If a tree falls down in it, the tree stays right there unless I am lucky enough to have a friend volunteer to chainsaw it out of the way. I have waited years for some obstacles to be removed. In the tended acre or so around the house and cottage, I have a few areas of grass, plantings of perennials around a few trees and near entrances, and a large vegetable garden with raised beds and mulched paths surrounded by deer fencing.

A month or so ago I decided that I also wanted a “woodland garden,” in my mind a kind of space that falls somewhere between tended and untended, with lots of perennials and a more natural look.

“Natural” has such an innocuous ring to it. Clearly an overused word. But whether or not putting a planter box in a woodland garden is natural or unnatural, I decided to do it. Bradley had built the box below about ten years ago and it sat on my back deck. The casters were shot but otherwise it was in great shape. Dirty and neglected for sure, but in great shape. A week ago it had nothing in it except weeds because nothing grows very well on that deck – not enough sun. Plus I’ve been busy with a few other things.

I admit it was looking sad. While I am shocked at myself sometimes that I let it (and other things) just sit, the fact is that there are only so many hours in the day. Some things have to wait. Then along came Fred with his power washer, which made an extraordinary difference. (Thank you, Fred!)

Now why would you leave such a nice planter box hiding on the back deck? Of course it had to be moved. Let it shine!

Moving it was easier said than done. The wood framing alone weighs quite a bit, to say nothing of the dirt inside. However, it doesn’t weigh as much as you might think. I watched a video some years ago about container gardening, and it said that in such a deep container, you could use filler in the bottom half – big empty cans, bubble wrap, even Styrofoam peanuts. We found these things when we dug out some of the dirt. 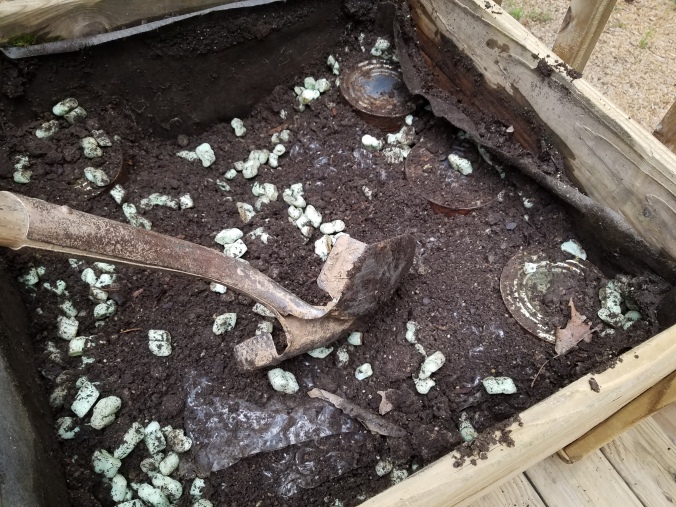 Once most of the dirt was out, it was pretty easy to move. We carried it to its new location near the chicken coop in what is going to be the woodland garden (someday all that space will be lovely, believe me!). But of course we had to first prepare the landing pad.

You can see that those bricks are not even close to level. But it’s easy to find dirt at my place, so we dug and built up the low corners and checked it, and built it up some more, and moved the bricks and finally got it. Voila!

If you want very cheap flowers at this time of year, make a trip to Lowe’s and look on their reduced rack in the garden section. Some of these were 50 cents. I bought enough to fill it and make it pretty, came home, added Miracle Gro potting soil to the planter box, carefully planted the new flowers, bedded it down with the same mulch I’ve been using everywhere else, gave everything water and called it a day. 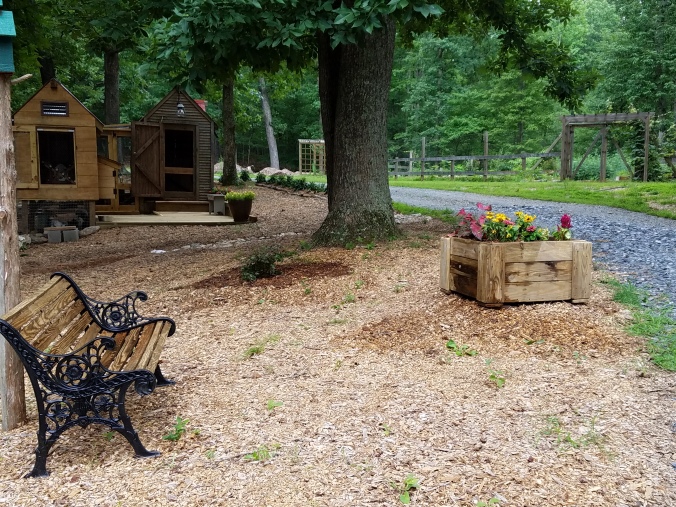 I was quite pleased. Bought the other plant behind it too – this is the “Sizzlin’ Pink Fringe Flower, a.k.a. Loropetalum Sizzlin’Pink.” Moving right along, and don’t you love it when you make something look nice where it didn’t look nice before? Maybe not natural, but nice.

At that point I still had (okay, I always will have) plenty else to do, so other than giving the new plants a daily drink, I switched gears and moved on to, let’s see, was it polyurethaning the cherry frames of the cottage windows that day? Maybe. Or collecting more rocks for the stream bed and adding length little by little?

Five days later, along I came with the hose and was shocked by these green invaders poking up through the mulch. What are they? They were not invited to the party!

No fair. Where did the little aliens come from? They weren’t in the original dirt or they would have been there when the planter box was on the deck. Could they have been in the potting soil? That’s never happened with store-bought potting soil before. And I’ve used that same mulch in lots of other places and never had sprouts appear.

I suppose it would be boring to just move a planter box and put flowers in it and walk away. And we can’t have boring. So, hello! (You rotten little aliens!) Enjoy your brief visit. You won’t be here long!