None the worse for wear, one of the roosters showed up this morning, having found his way through the woods from the bottom of the hill, drawn perhaps by the incessant crowing of the not-yet-relocated little d’uccle roosters that clearly have a Napoleon complex. I surprise myself with the thought that perhaps this chicken has more than a pea brain. 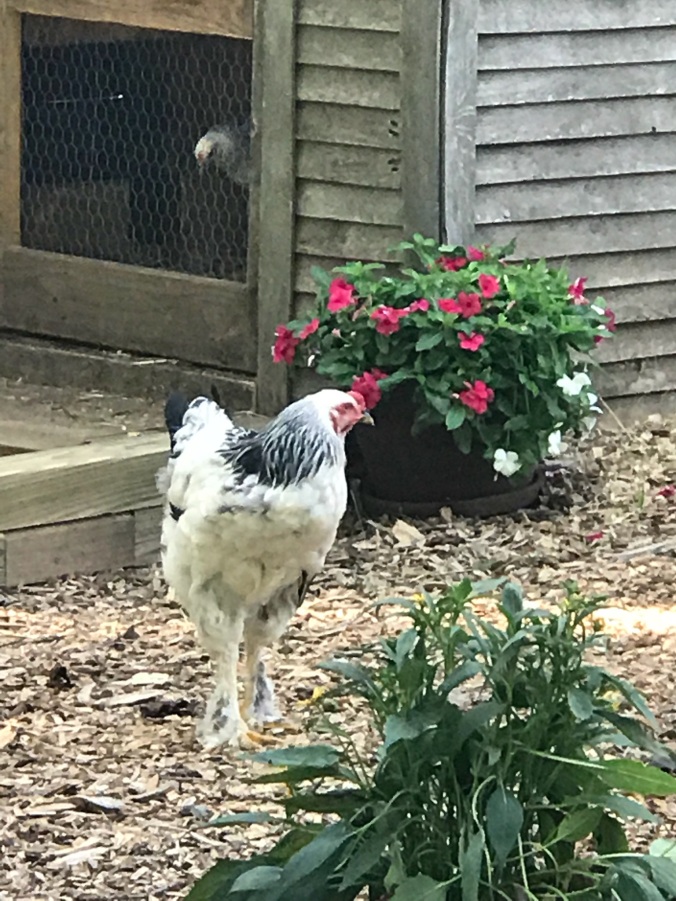 Ha! he says. Thought you fooled me!

I’d been alternately imagining him and his buddies enjoying a safe haven or having met a quick demise. Their haven would be filled with worms, beetles and other forms of chicken protein, reasonably sheltered and dry, and they would take turns on lookout for enemies. Your turn, Jack, I’m hungry.

Only one turning up raises questions. Dissention in the ranks? Full on attack with one survivor? Out for a morning stroll, got distracted by a buzzing bee and randomly wound up back home? Vague deja vu recollection of having been carried to this location. Oh look, a path! I wonder where it goes…

This big boy can’t tell his story, but he has one. So do his buddies, but theirs remain a mystery for now. We each have our own story. Sure, they are mixed up with other people’s (and sometimes chickens!), turned upside down at times by circumstances beyond our control, filled with surprises and challenges (good or not). Our own chapters don’t usually turn out the way we think they will, but the next chapter always builds on the last. And no one can take our story away. Say it like the sea gulls in Finding Nemo: Mine! Mine! Mine! If you forget how adorable they are, see https://www.youtube.com/watch?v=H4BNbHBcnDI)

The other day I was reminded of Ruby Thewes in Cold Mountain. I appreciate this movie, and watched it start to finish again last night.  I appreciate the window it gives into the ugly, bloody, complex, unfair story of that conflict, showing teenage boys who don’t make it through the battle, the old woman killing her beauty of a goat in order to give Inman food, a young widow depending on her hog to get her through the winter, and love unable to write its full story because arrogant, powerful people play their games with no regard for human and societal cost.

The book by Charles Frazier that the movie is based on, by the way, won a National Book Award and is exceedingly well written. His writing is so on point with the culture, geography, flora, fauna and language of the time, and paints exceptional images of the heart-wrenching trek Inman took near the end of the Civil War to get back to Ada. Even just contrasting the movie scene of the widow, her baby and the hungry Union soldiers with its corresponding chapter, “bride bed full of blood,” would make for a highly worthwhile evening. How much we take for granted. How easy we have it.

The stories of individuals, no matter what era or location, brings me back to this prodigal rooster. I’m stuck now again though. If I leave him outside the coop, he will scratch in my nicely spread mulch to find his worms, make a mess of things, and perhaps invite the predators to come closer and put the other chickens in harm’s way. If I keep him, I’m back where I was before: What To Do!

This whole chicken enterprise is easier when you don’t have to make tough decisions and can just happily watch a silkie explore her new coop, starting in the brooding box we put her in for kicks last night. Coco, who has her own tales of woe, couldn’t quite reach her.

I then closed the brooding box door and watched that chick start with a look of Huh! Now what do you want me to do? and then make her way outside. 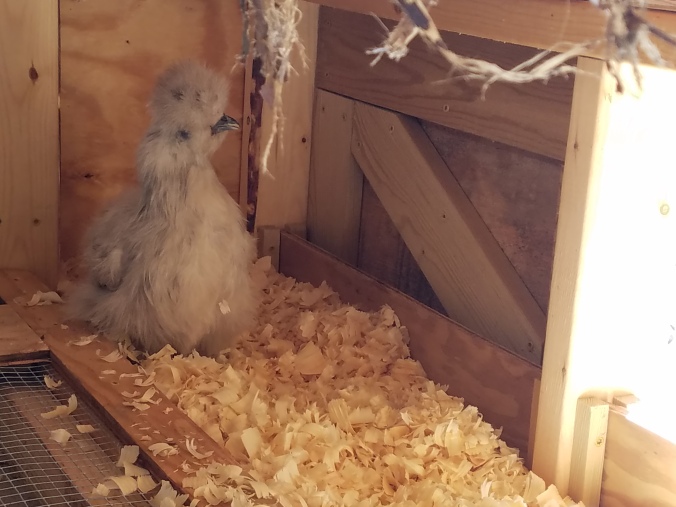 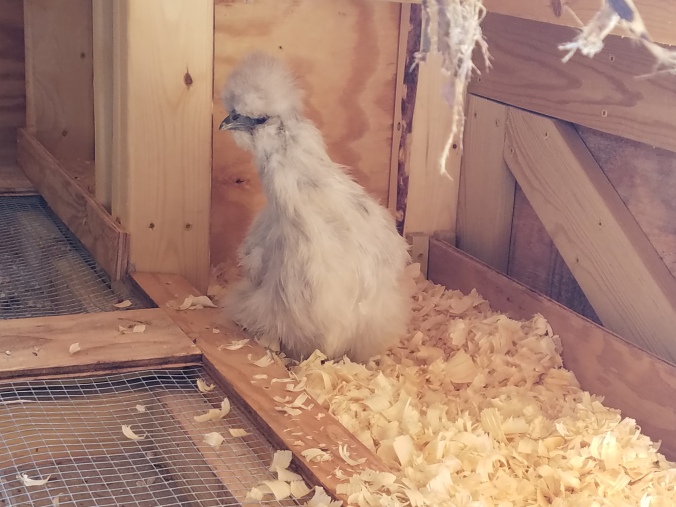 I imagine that later, after she made her way out that coop through the egg-shaped door, while she huddled on the ground with her friends late last night, she let them talk a bit. She waited while the others compared notes on their stylish hairdos and told of the shiny, fancy bugs they had caught.

Then she told her own story: Hey, I gotta tell y’all. I’d just chomped down on a big fat greenish beetle and all of a sudden I was grabbed from behind and put in this strange place with fine wood shavings underneath — not like this rough chunky mulch we scratch around in all day. A flat-nosed black thing with big eyes and no hairdo at all to speak of — she really needs help, that one — looked up at me and terrified me, but I didn’t let on. I’m cool…