Sometimes things do too well. All things in moderation, they say, and we generally want things to do better rather than worse, but sometimes things go crazy and require serious cutting back. Yesterday I cut back the blackberries, black raspberries and raspberries. I not only cut them back. I gave them away.

I should have known better than to move them into the garden in the first place. I should have realized that with the better soil in there, with the continual feeding they get from decomposing leaves, they would thrive. Last year already they looked like this. There is a vague way to get between the rows, but it had begun to be tricky even then. 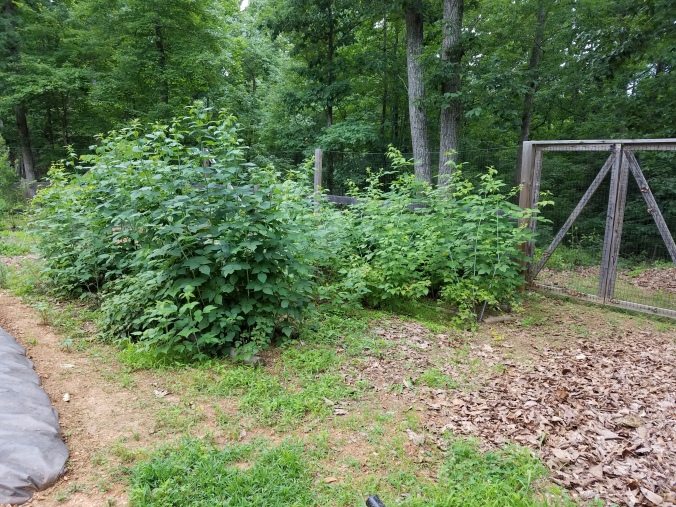 This year I was too embarrassed by their overgrown tangles to take a front-on photo. They snuck into this image from when I was weeding in July. You can see there is no way in.

They do produce berries, lovely berries, but you could pick only the ones you could reach from the perimeter of this berry jungle. I did enjoy a few handfuls of reds and blacks. I assume the birds got the rest, though how they navigate in there beats me.

I am ready to throw in the towel. Maybe it’s the prickers. Do you see what I see among these cut branches?

Look carefully. One pricker after the next sticks out in random directions every inch or so. They are razor sharp and get through even the super-coated work gloves I have, the kind made for winter work – warm and thick but still movable. They stick through the plastic coating into your fingers without warning and they break off into the same plastic coating to sneak up on you and stick you later as well. Some get past and make it into a warm bed under your skin. This one I pushed out this morning. See how teeny? I think maybe different gloves would have been better. 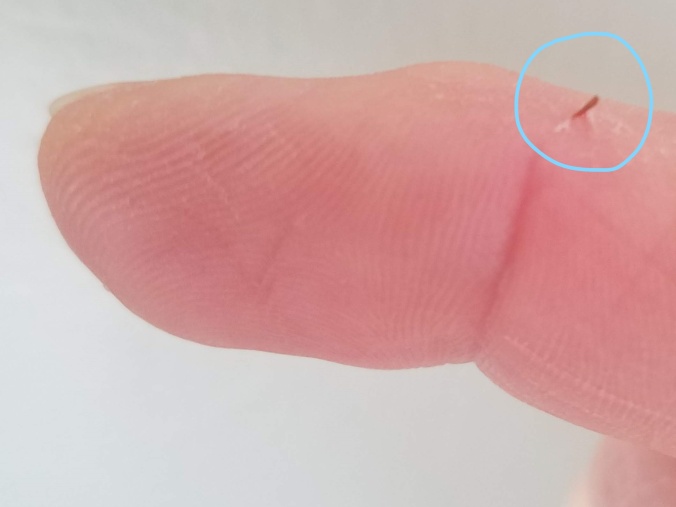 When I started this job, I knew there would be pain. There were a lot of branches.

Perhaps you can’t see them very well behind the bench. Let me help. 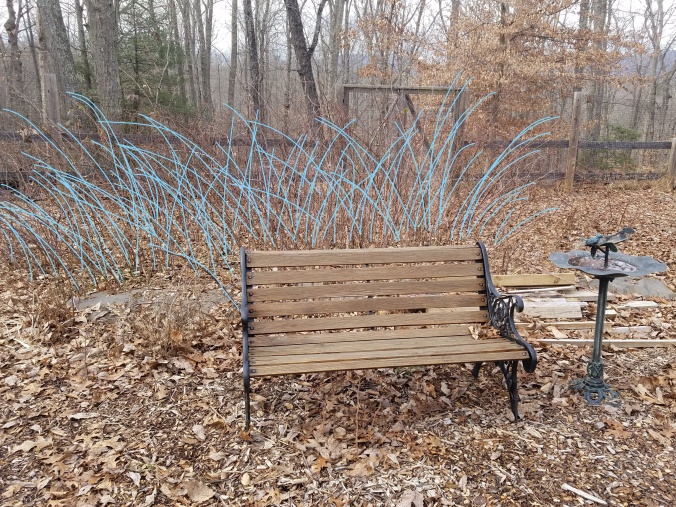 The blue lines give an idea of how tall they were, but not how many. There were way more branches than blue lines. By the time I was done I had three piles.

It was a gray day and not a fun task. I had just enough energy for this and nothing more, being on the recovering end of a bad cold, but not 100% better yet. I offered the plants to Tracy, who came later to dig them out. She filled the back of her pickup with foot-high starters and will find a perfect place with lots of room between the rows to plant them. Whatever comes up after she has taken all she wants, I’ll put elsewhere, outside the fence, and let them have at it, go to town, reproduce like rabbits if they want. I just don’t want to deal with the prickers anymore.

This morning I went out to check on the chickens, fill their feeder, check for eggs. I moseyed over to the dormant garden to look at those pricker branches once again, perhaps to rejoice over a job done. The garden is a little depressing in winter. The mum that was so spectacular in October is just sad now.

The lemon grass that had bushed out so far it overgrew its planter box had been hit by frost finally and cut back.

Not an overly uplifting mosey. Even the bird bath up close had nothing to redeem it. 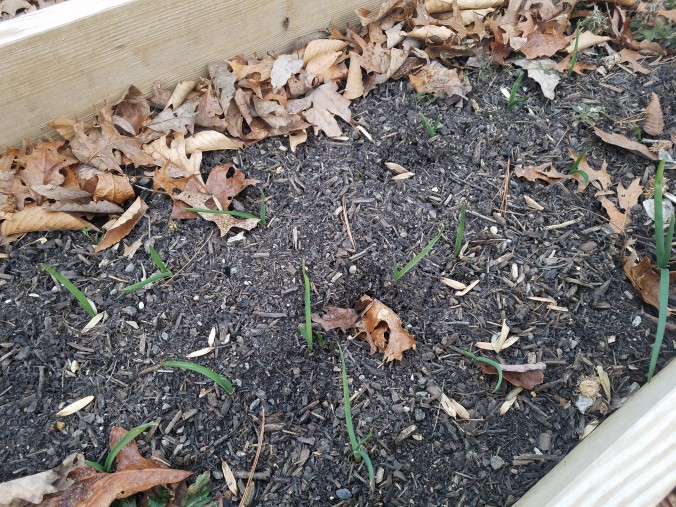 On October 24, just over three months ago, I planted some garlic bulbs that Tracy had given me, garlic bulbs called Nootka Rose (who comes up with these names?) that had sent green shoots into the air. Green shoots! January! You know, sometimes it doesn’t take much for our spirits to be lifted. Look at that green!

And the seasons, they go round and round…