Sometimes, when we have no clue how to do a thing or no clue how it works, we pass it by.

It’s just a thing. We don’t and can’t appreciate what goes into it or what went into it.

Phones come to mind. The electronic inner workings and technological wonders of smartphones aside, even pre-smartphones were a thing we just used. There was no need to understand them – what components were assembled in what manner to produce a device that allowed me to talk to Claudia on the other side of the big pond. We just talked on the phone when we could – and it was wonderful! (Even if it cost a dollar a minute back then!)

Maybe it’s when you have the tiniest bit of know-how or even curiosity that appreciation begins. Maybe the more you know and the more your knowledge grows over time, the more you look in awe at those who have mastered a craft or a skill. The more I learn about bread (and we have been experimenting with a bread that beats anything I’ve ever made!) the more I marvel at bakers. The more time I spend in the garden, the more I admire those who make plants grow beautifully and productively. And the more I measure, cut, level, plumb, square, hold, hammer and saw, the more I stand in awe of builders.

Lincoln comes to mind. On a recent visit, he gifted me with some of his time and expertise. We are putting a roof over the new front porch and, well, most people are fairly clueless about how to do this, myself included. I caught him staring at it on the first day. Can you see his wheels turning? 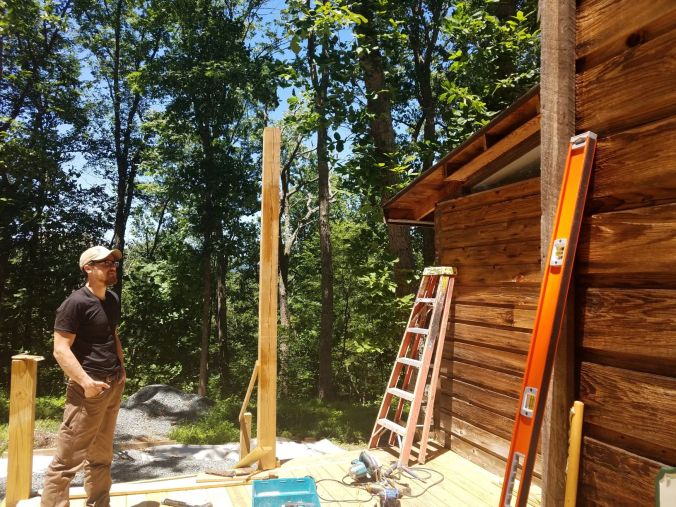 Sandy and Joe and Samuel and I had poured the footers and put the posts up (hopefully placed correctly because there would be no moving them!) and laid enough decking boards to be able to stand on.

This is the front view of what it looked like just before he started. 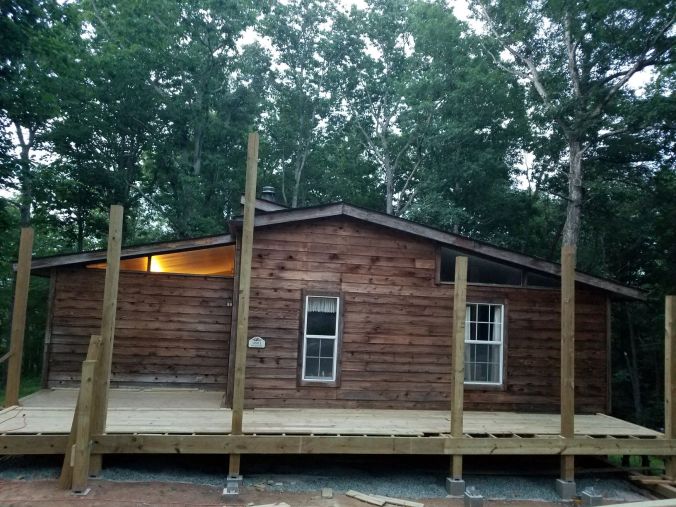 And here’s beautiful Willow (and another angle) the day they arrived. The siding is still up, the old, upper, single-pane triangular windows still in, even the gutter and fascia boards still attached. 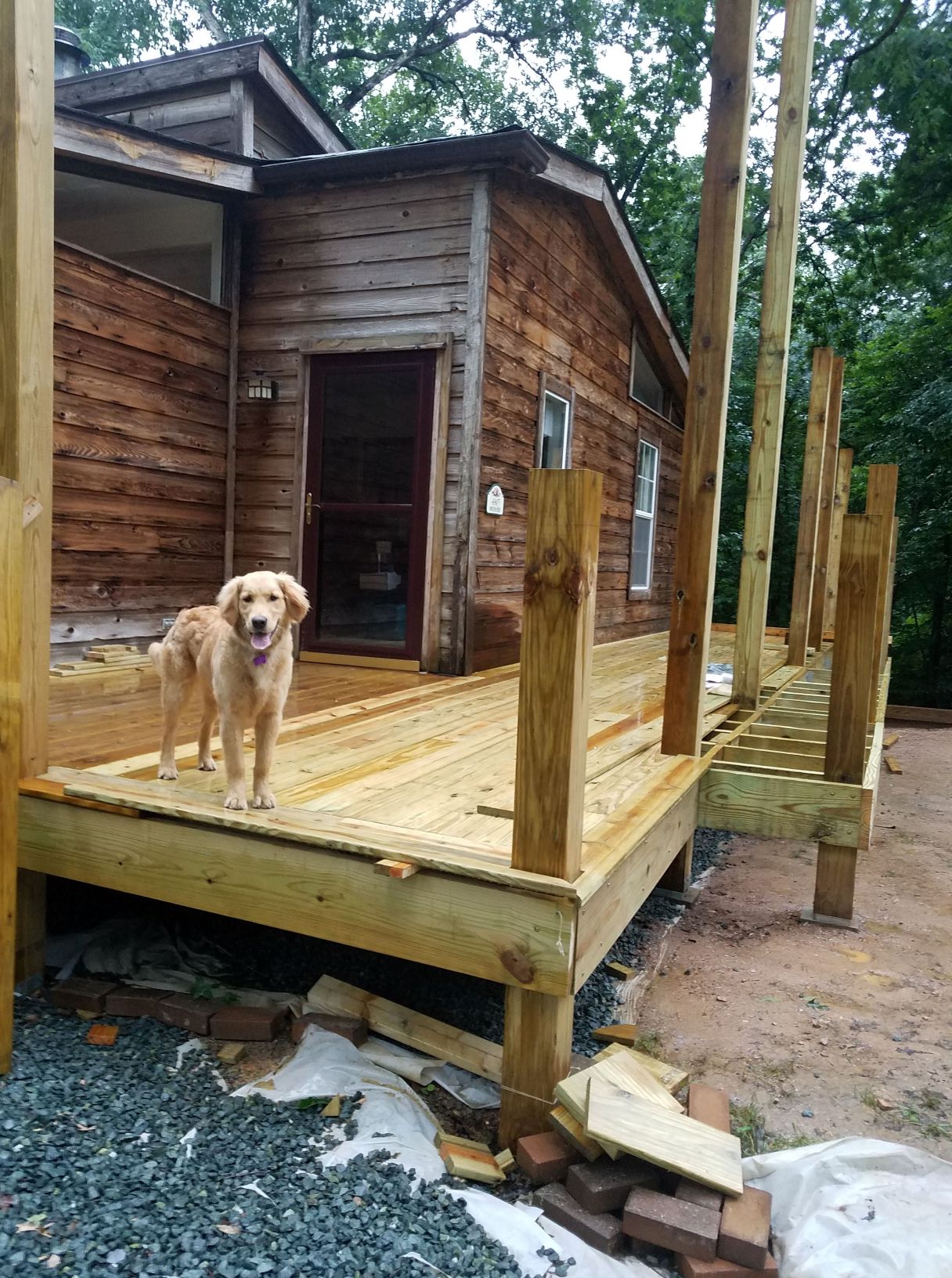 …then he secured the first horizontal 6×6 connecting the house to the new porch. If you look carefully you can see him staring again. All that staring is not for nothing. 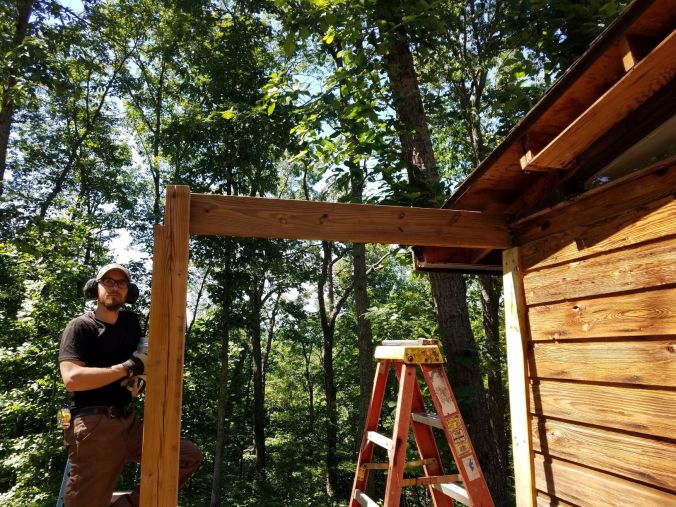 At one point he took a break for a Coco-hug, and Eppie and Sandy looked on, so I snapped a photo showing some siding down, windows out (and just sheetrock on the inside), roof rafters in over the old porch and some upper horizontals secured in their notched places.

Within a day or so, all of the upper horizontals were secured and plywood covered the old window openings.

I thought it a lovely (if sun-splotched) image: the framework framing cutie-pie Rise and Eppie dancing/posing on their last day here. Maybe it’s just lovely to me because I love these girls so much!

But I still didn’t see the thing that made me gasp in awe a couple weeks later. Sandy and I kept going after Lincoln left. I laid the rest of the decking boards with some help from Joe and removed the remaining siding and got myself a shiner in the process! (Damn cat’s paw tool came back at me just a bit too fast…)

Sandy finished the roof over the old porch, prepped/shored up all the soffit boxes and mounted the ledger board and angled (principle?) rafters for the front roof (they attach to the house). We used house wrap as a moisture barrier (not that it had any under that old cedar siding for the last 45 years, but hey, moving forward in a better way…) and tidied up a bit. I began laying out possibilities for half-round steps to soften all these straight lines everywhere.

Just prior to beginning the forward-pointing front roof rafters, Sandy and I were staring at the house from a ways back. In particular, we were checking to make sure that everything (ignoring the windows that will go away) looked centered and correct. We were doing the every-now-and-then long view, an ostensibly purposeful way to pause when it is hot and you need to do something else.

My eye caught the place where the two outer horizontal boards meet in the center. It might be hard to see, but trust me, there’s a line there. 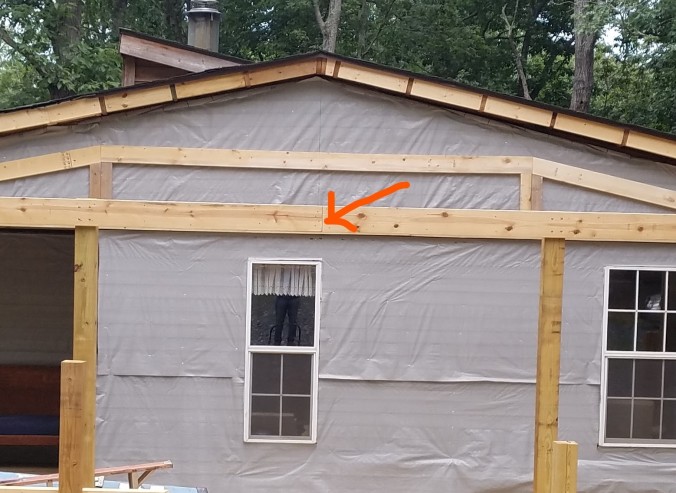 Up a little closer now. See?

That horizontal “board” (singular) is actually two boards (plural) “married” to each other, double thickness for strength (in case you were wondering how two boards could just meet end-to-end like that). The outer one consists of two boards meeting end-to-end in the middle; the inner one spans the joint.

“Just curious,” I said to Sandy. “Is that the exact middle of that span?” I had to measure.

And NOT ONLY THAT. We took a level, laid it across to the ledger board that’s secured against the house behind the horizontal married board(s) (and it was level of course, which is part of why you can’t see it at all), squared it up to the house, made a mark, squared that up vertically toward the peak of the roof and made a line. See that thin vertical line? Lo and behold, dead on! Perfectly centered. Perfectly vertical. Perfectly square. 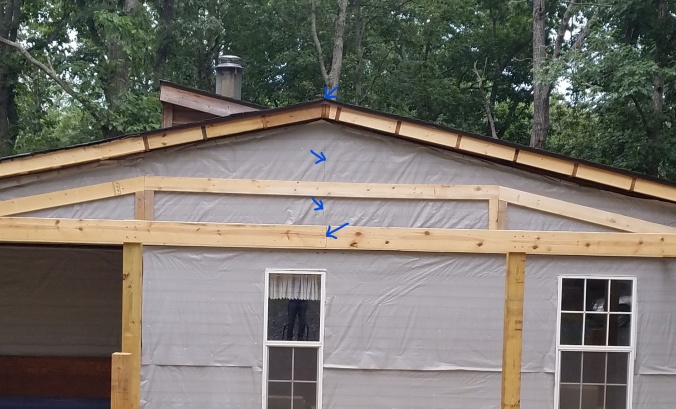 Maybe this is normal. Maybe it’s just what builders do and maybe they are equally astounded when perfect bread comes out of the oven. I allow for that. But I applaud Lincoln! You don’t learn how to do this overnight. You don’t reach this skill level without putting in a lot of hours, making some mistakes, figuring out how to do it right the first time or how to fix it when you mess up. I am sooooo impressed!

On Saturday Lincoln sent me a photo. “One year ago today,” was all the caption said. A year ago he had just started building his pentagonal, straw bale house in Vermont. From the pile of dirt he was standing on, this is what he saw on July 6, 2018.

On the same date in 2019, from the same angle, a house stands, a house he built almost single-handedly. It’s not finished because of the many unconventionalities they wanted to incorporate – e.g. most people put up regular siding and a composite shingle roof, and Lincoln has yet to “mud” the outside of the bales and skin the roof with diamond-shaped metal shingles, to say nothing of building his own windows – but they are happily living in it. 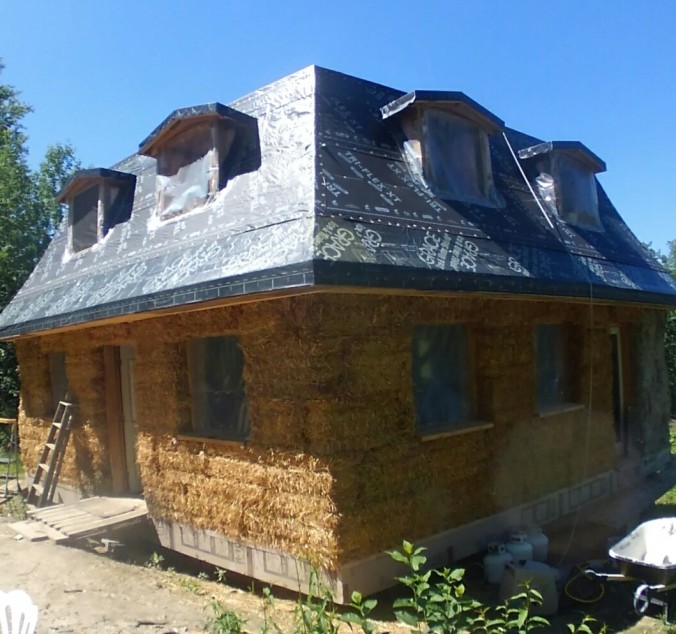 I never have been (and never will be) the Queen of Exactitude when it comes to cooking but my, oh my, you don’t build porch roofs or pentagonal houses or anything else without respect for numbers and the knowledge of how to use them.  To Sandy, to Ernie, to Joe, to Bradley, to Billy, to Mark and in this case to Lincoln especially – to all you guys who build things – WOW! You have my eternal admiration!

4 thoughts on “Sixty-Four and One-Quarter”