When all your ducks are in a row, when you are exactly where you want to be and you feel strong, healthy and content, it’s wonderful. Take away any of those factors – a preferred location, optimal strength, good health or contentment – and the picture changes. For instance, here I am in beautiful Vermont spending precious time with dear family and friends, and oh, I wish I felt better.

Yesterday I woke up to a nasty headache. The first thing in my head was Bother! That’s going to get in the way of helping Lincoln with those stairs. Then I thought, Oh, the stairs, he’s building the stairs today, wonderful!

While Rise and Eppie were with me last week during their school break, Lincoln had walled in the bedrooms upstairs in their straw bale house and moved beds and dressers up there. He did this by way of a ladder, this ladder. Here is Eppie beginning her descent on it.

Don’t ask me how he got those heavy things up there. He did. And the girls came home to their new bedroom which, as you might surmise, they could reach by way of said ladder. When I said Be careful to Eppie about it the first day back, she said calmly, “Oma, I’ve done this many times,” as she carefully went down.

I have confidence in their surefootedness when they are paying attention. But perhaps you have experience with children who sometimes get distracted. I do. I’m not sure why those boards are sticking out in front of Eppie like that (they don’t belong there), but there’s a rather large unblocked edge up there too. Need I say more? Also, I am not overly comfortable on ladders myself and guess where the bathroom is in this house. So when I first arrived on Sunday I suggested to Lincoln that stairs, soon, would be a good idea. He was not particularly interested in building them just now, having other aspects of this massive project in mind. I might have suggested it more than once and from several different angles. Lo and behold (thank God!) he decided to make them.

The wood for the hemlock stringers was out in the snow, but he pulled it in, scraped it off and brought it inside. He pulled out his computer and fine-tuned his design and measurements. He began notching the 3x12s, which were my happy job to sand with his marvelous Mirka Deros pad sander. By about lunchtime yesterday they were ready. 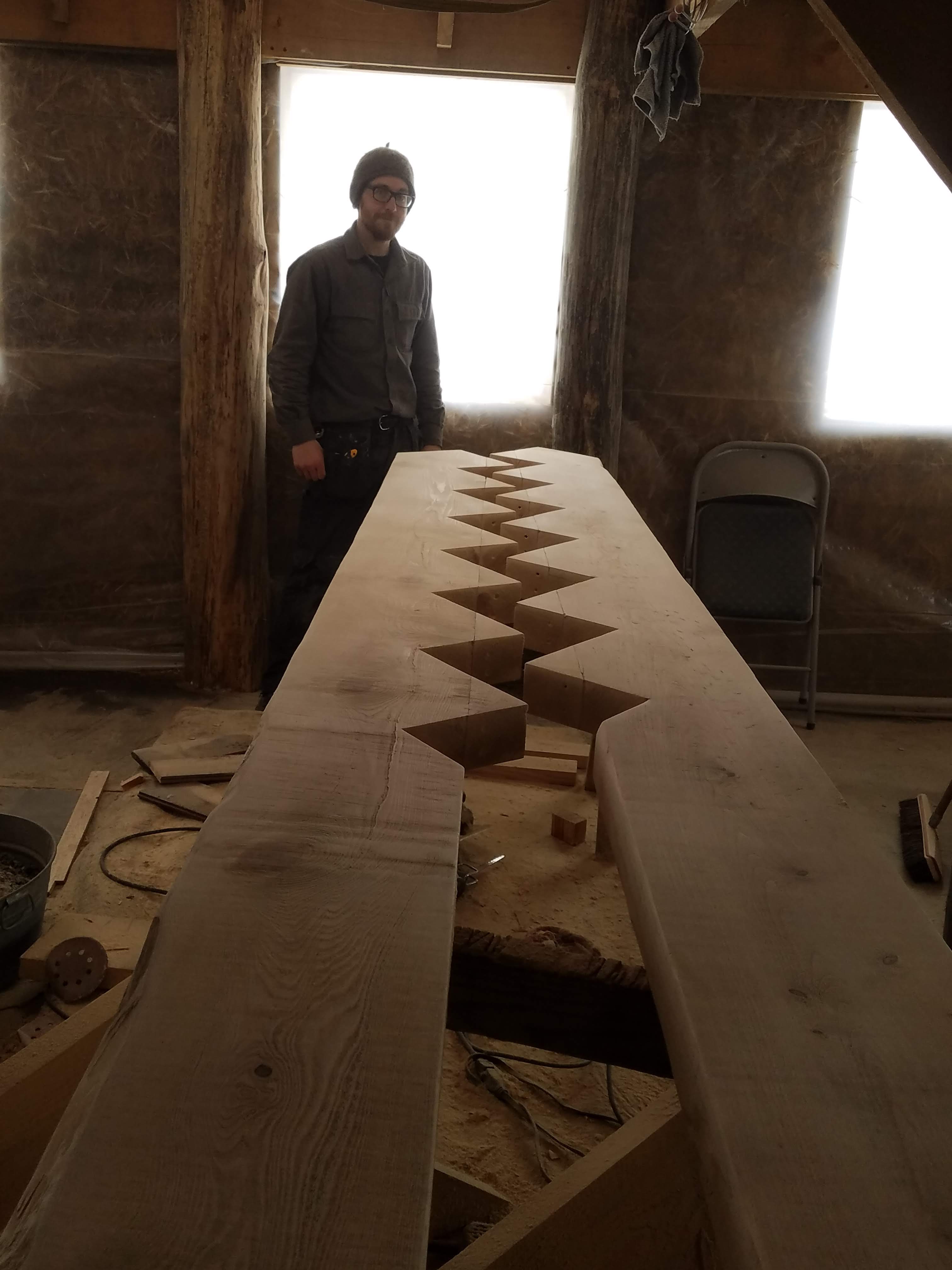 After we prepared the place for the landing and the three bottom stairs (right about where Lincoln‘s standing), he moved the long stringers. These are not lightweight. 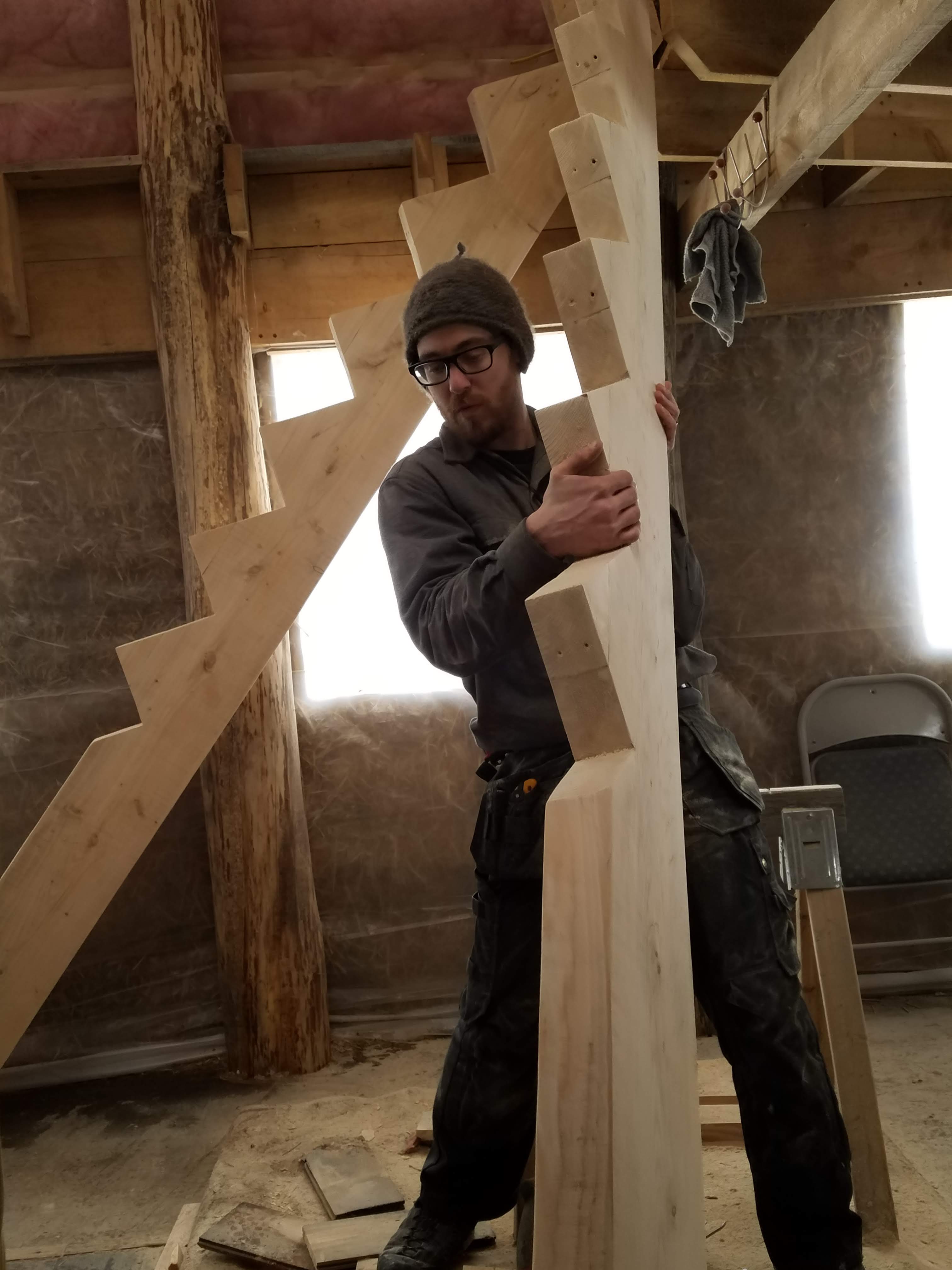 Once he secured them in their rightful places, we (i.e., he with me marginally helping) cut and trimmed the treads. More Mirka Deros sanding – what a fabulous tool – to make the edges un-sharp, and the staircase took shape.

There’s a fine line in woodworking between precision on the one hand and as-good-as-it’s-going-to-get on the other, but sometimes static pressure can nudge a slightly twisted board a little closer to the pencil mark it is supposed to line up with. The right-hand stringer was less than optimally cooperative, and Lincoln couldn’t have it that way, but he was satisfied after the clamp did its work.

By dinnertime he had all treads in place and screwed down (let’s hope they don’t dry too fast and warp), as well as railings upstairs and the ladder back in the barn. It was impossible to get a good photo, but a person can now get upstairs without having to climb a ladder and can be up there without worrying about falling from that height. And if you are the Oma, you can relax a bit about the little ones playing up there.

During all of the construction prior to building the stairs, no one had fallen or come close to falling – and the planks were way less stable than the floor up there is now. Chances are very good that if months more had passed with only the ladder in place, all would have been fine. I probably worry too much. I don’t know. That’s where George Bailey comes in.

In the classic It’s a Wonderful Life (1946), George Bailey (Jimmy Stewart) is continually frustrated, continually wishing he was doing something else, in his case traveling the world or building big, important things. After he decides that he has wasted his life and the only way to help his family is to absent himself (permanently, by jumping off a bridge), he gets a miraculous look at what his world would look like had he not been in it. His brother would have died, Mr. Gower would have gone to prison, Nick would have become mean, Mary would have stayed alone, Violet would have gone down the wrong path and his uncle would have ended up in the insane asylum.

George had no idea what his presence accomplished, what his everyday actions – bumbling as they were – meant to the people and the community around him, what calamities those actions prevented, what good (and exponential good) they brought.

When I woke up with a headache two days ago, I remembered the stairs but chided myself for perhaps having had too much to say about the need for them. It’s not my house and Lincoln should proceed as he deems necessary and appropriate. But George Bailey reminded me that maybe, just maybe, I am here, right now, this week, for a reason. Something in me said Stairs would be good. Stairs should be next. Maybe that matters for reasons I will never know. Maybe it doesn’t.

Next time you need to push yourself a little to be somewhere when it would be easier to not be there, think about George. Maybe someone needs your smile, or is stronger because you are with them, or makes a choice that is somehow significant (even if you never know how) because of your presence. Maybe you are the spoonful of sugar that helps the medicine go down. Maybe your vote tips the scales, or your solution solves the problem, or your help allows a thing that couldn’t happen otherwise.

We can never know what might have been had we not been there. We can never know that because of our being there, X happened instead of Y, or X didn’t happen at all, or Y was more likely to happen. All I know is, stair-making with Lincoln gave me a fresh understanding that where we are makes a difference.