You can never be quite sure what’s going to do well in the garden. Last year I had cucumbers galore, this year not so many. Last year the beets were few and far between, this year lots. I planted both red and green cabbage this year. The reds were so pitiful, I didn’t bother even trying to salvage anything from them. But the greens! 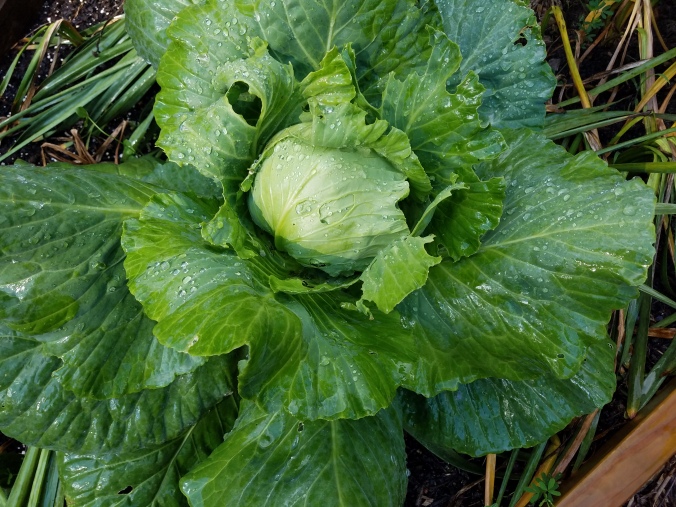 It’s hard to tell size from this picture, but that head is almost as big as a volleyball.  They don’t come one at a time. I had six at once in June. What do you do with six large heads of green cabbage?

I shredded one head and sautéed it with sliced onion and a little bacon for flavor. A little salt and pepper and 45 minutes on a low flame (covered) makes a very fine side dish. I wrapped three heads carefully and put them in the fridge downstairs. That left two. Cole slaw is nice, I thought, but I am not as wild about using mayonnaise in dressings, and I don’t buy bottled dressings. Vinegar and oil would work, but I wondered about lemon, so I experimented.

I chopped up two heads very fine, added chopped red onion and shredded carrot and made a lemon dressing. Yum! Two heads of cabbage make a lot of cole slaw, so after the meal I packed the remainder in wide-mouth quart-sized mason jars and refrigerated it. I found that the flavors got even better the next day and the next. I gave one jar to my neighbors Jen and Quin, and one to Lincoln and Julia, and they loved it too.

A few weeks later I made more, using the last of the garden heads, and we enjoyed it just the same. That was in August. Today I got a hankering for Lemon Cole Slaw again.

Get yourself a nice head of green cabbage. (It’s very cheap!) Chop it fine. I use my 10-inch chef’s knife, preferring to do it by hand because 1. I control the size of the chop and 2. I get a bit of a workout which makes me feel better about dessert 😊

Start by quartering the head and cutting out the core. Slice like this first:

Certainly you may use a food processor or some other chopping device. I like to add red onion and carrot for both color and flavor. To the one head of cabbage I bought and chopped finely today, I added two finely chopped red onions (each onion was the size of a golf ball) and four small carrots from my garden. Use however much of each as seems reasonable to you. Use a big bowl. The biggest one you have is probably best.

For the dressing, I adapted the sweet-sour dressing I use for Carrot-Raisin Salad from a favorite old (1976) cookbook called Bakery Lane Soup Bowl.

For the lemon dressing I used 1/3 cup sugar, ½ cup lemon juice, ¼ cup olive oil and salt and pepper to taste (for me that’s about 1 ½ tsp salt and ¼ tsp pepper). The salad looks pretty once you mix it all up with the dressing and it tastes light and refreshing.

We had some for dinner and I put the leftover in one small jar and one large jar. Pack it in tightly! It keeps well stored in the fridge. I can’t say how long, but am guessing a week or so. Mine doesn’t last that long!

The smaller jar here is special to me because Claudia’s dad makes his own honey on their farm in Betzigau in southern Germany and packs it in these jars. I save the jar of course because it reminds me of him and his wonderful gift to me. This jar is from the honey Claudia brought last year. One time when I was returning from a trip there and had forgotten that even creamed honey is considered a liquid and put it in my carry-on so that I could be more careful with the glass jar (do you see where I’m going!?), I had to watch the airline security official throw it in the trash (!!!!) because it was a “liquid.” “It’s honey!” I told the woman, “It’s like gold to me!” She just threw it in the trash… Moral of this story: Put honey in your checked bag!

If you want to make Carrot-Raisin Salad, peel and shred 2 pounds of carrots and mix with this same dressing only using cider vinegar instead of the lemon juice (same quantity). Mix in a cup of raisins (golden or regular) just before serving. Some people don’t like the raisins, so I usually divide it in half and add raisins to only one of the bowls. If you have leftover of the one with the raisins and you store it in the fridge, the raisins will absorb some of the dressing and be soft and all puffed up the next day. I don’t mind this at all, and it doesn’t hurt anything, just know it will happen.

These salads-in-a-jar are so nice to have on hand. No last-minute salad prep when it’s time for dinner. Oh, look, here’s salad!

5 thoughts on “A New Twist on Cole Slaw”