Yesterday when I served lunch, I was told, “You should add this to your cookbook.” But it’s not a recipe, I thought. It’s potatoes, onions and sausage, cut small and baked on high till crisp. To be fair, I did coat it with olive oil and throw some salt and pepper in there.

“I don’t have a cookbook,” I countered. 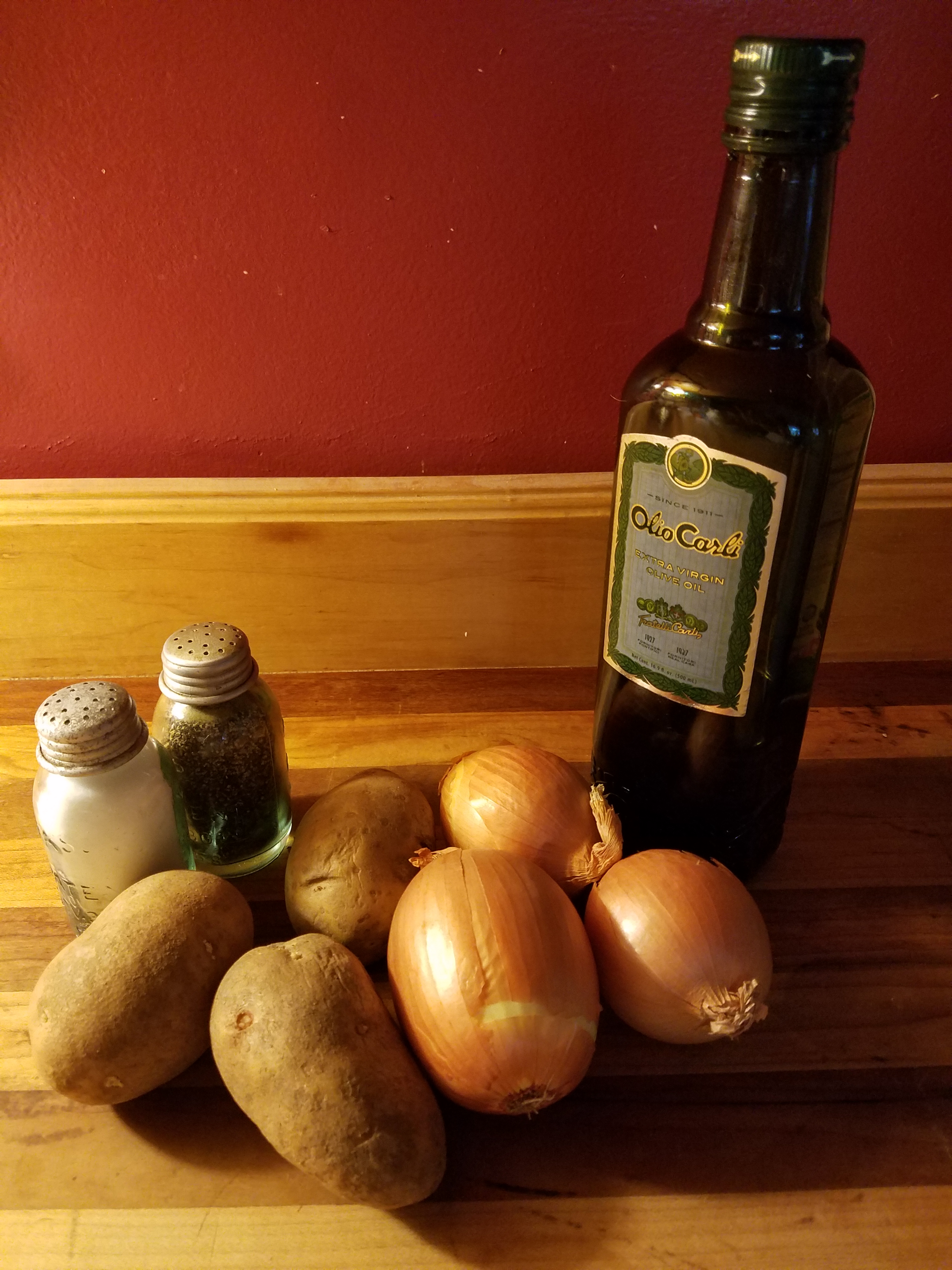 But first, a bit of background. I discovered a lot during the years when I worked full time and had a business (or two) on the side. One is that regardless of how busy you are, you still need to eat. Another is that while food fills the stomach and fuels the body, good food feeds the senses and the soul. Hot, fresh from the oven, crisp on the outside and soft on the inside, a little bit salty and a good bit flavorful — this is as close to heaven as we may get.

Naturally, a vast majority of manufactured, prepared foods are aimed at this sensory combination. Some people, however, (like myself) want to know what they’re eating. If I had any prepared foods in the house — you know, the kind that come in packages and boxes — I would take a picture of the ingredient list and ask you: What is that all that stuff in there? What would it do to my body?

When I was a child, I made a picture in my mind of what happens to your food after you eat it. I’m sure this image was the result of too many Saturday morning cartoons, nonetheless it worked for me, and might work better for you if you imagine you’re five. I observed that food goes in your mouth a few times a day and something else, less often and less fun, comes out you know where. In between I imagined a kind of path, like a tunnel, and what you ate traveled along this tunnel. If I had been older or more thoughtful (some might say more intelligent) I would have realized that things happen along the way to the food and because of the food, that parts of it are used for this and that so that your body functions correctly. But what do you want from a five-year-old?

Specific usefulness never came into my scenario. The food was simply moved along toward the exit. This is the cartoon part. I knew I had this thing called a stomach, which in my five-year-old mind was like a cave within the tunnel, vast and high-ceilinged. In the cave were workers with push brooms, pushing the food along. It was their job, and they did it well.

Thank you, Sandy, for demonstrating the correct technique for the use of a push broom. You have hopefully made it easy for everyone to imagine my little workers. 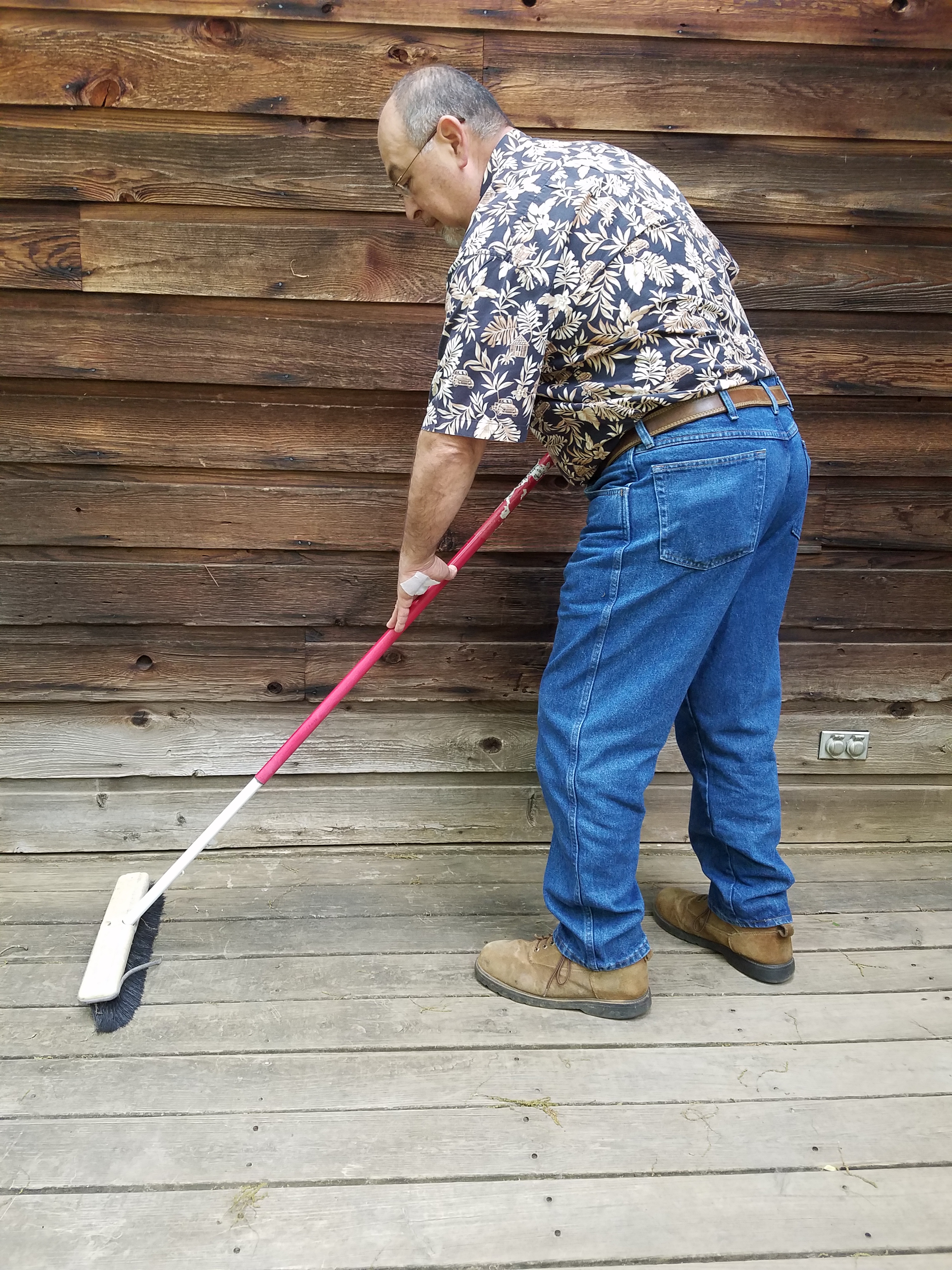 I think I was seven or eight when I started to think about what’s in food, and this greater understanding  was because of vitamins. My mother gave me a chewable every day, saying vitamins had in them what your body needs to be healthy. One day in the car (specifically I remember we were on Route 31 heading south out of Washington Township in Warren County, New Jersey) I asked her what people did in the old days when they didn’t have vitamins. How did their bodies get what they needed? My dear, wise mother said they simply listened to their bodies and ate the good food it asked for, and the good food had everything you need. I might have asked Why do we need vitamins then? Don’t we eat good food? But I didn’t. I just took it as a good answer and after that I didn’t worry if I forgot my vitamin. I knew we were eating pretty well.

I admit I carried this push broom image into adulthood, but of course I enlarged it to include the vitamins and other nutrients scooting off to parts unknown to serve their specific purposes, whatever those were. Imagine my joy while taking Nutrition 101 in college and finally learning what all those vitamins do!

In the adult version of this image, however, The Big Bad enters. It works like this: the good food still does what it is supposed to, that is, it moves along by way of the push broom in the direction the worker sends it, with the vitamins and other good parts knowing when and where to take their leave and go do their thing. But the bad food, in my mind the unpronounceable ingredients on that package list, waits in its devious and menacing way till the worker with the push broom isn’t looking and then sneaks off in order to take up residence in a tiny corner of the body somewhere, hiding, waiting for years sometimes until one day it meets another nasty, ultimately ruinous, additive and together they make a kind of bad magic in my body.

Thus The Big Bad becomes The Big C. Some cancers are preventable. Don’t smoke if you want to avoid lung cancer (not that this always works, but your chances are tremendously better). But some were mysterious — who knew why you got them? When I was 23, I lost my sister Lisa to Hodgkin’s disease. I don’t think her diet had anything to do with it, and I doubt she could have done anything to prevent it. But her death changed me. I became more aware of how precious life is and more determined to live it fully. This meant doing what I could to take good care of myself. I might not prevent every bad thing from happening to my own body, but by golly I would prevent what I could.

My silly workers with their push brooms, my simplistic, juvenile images of the digestive process are no less ridiculous things for having helped me eat better food my whole life, but they are my workers, thank you very much, and I hold them dear.

Let us return to potatoes and onions. I know what they are. I don’t have to wonder about or worry about what they might do to me. I can hold them in my hands, peel them, slice them, cook them with other simple ingredients — salt, pepper, olive oil — and enjoy them enormously.

Yesterday all I did was add sweet Italian sausage to the equation. I know, I know — some might see a conflict here. How do you know what’s in the sausage?? I do buy the good sausage that lists only pork and spices as the ingredients. Nonetheless, point taken. To which I respond that I am not fanatical. Some bad gets in sometimes, I accept that. My control only goes so far. We do what we can.

Now for my “recipe.”

You will need potatoes, onions and sweet Italian sausage. I’m sorry I can’t give you amounts. Use your head. How many people are eating? Determine your own proportions. Do you like the potatoes more than the sausage? Are the onions a flavor for you, or a vegetable? Do you want leftovers? Use however much you want of each.

Take those sausages and slice them as thinly as you can. If they are fresh or have been thawed completely, this process is not so easy, given those bothersome casings. Frankly they are kind of a mess. I found the easiest way to do this is to freeze them or thaw them to the point where they are easily sliceable. I’ve heard that this is how they slice meat so thin for jerky. If you don’t have a freezer or the patience or the right timing for this step, just use your hands to squish the sausage meat out of the casings and break it up best you can. Find humor in this step. Put the pieces in a bowl.

I used a mandolin to cut the potatoes and onions this time. I am still getting used to a mandolin, having been strictly a knife girl my whole life, and at first I used the wrong blade so the potatoes were more shredded than sliced. I switched to something that made them more a french fry cut, which seemed reasonable. It doesn’t really matter, as long as they’re thin. Of course I used the shreds too. No waste in my world. Same for the onions, just cut them thin somehow, however works for you. Add these potatoes and onions to the sausage pieces in the bowl.

Right about now you should turn on your oven to 400 degrees. This gives it time to heat up while you are finishing up the prep work, but not too much time. You wouldn’t want a hot oven to sit there unused for too long.

You want enough olive oil to coat everything thinly, but not so much that you would see the oil pooling anywhere. Add a little at a time and use your hands to toss everything together and ensure an even coat. Yes, a spoon works if you don’t want to use your hands, but your hands are better. They are the best tool in the kitchen. Focus on the coating of the potatoes. No need to worry about the sausages, as they have their own fat, and the onions are just along for the ride.

Once you are confident that the potatoes are coated (and you didn’t forget the salt and pepper), turn the bowl upside down over a heavy sheet pan that has sides (some call this a cookie sheet) and spread everything evenly. A 9×13″ glass or metal baking dish works well too, so long as you don’t have too much. You want one layer, not a big thickness. Use two pans if you have to. Thank me later.

Put the pan in your hot oven and let it bake until the potatoes are crispy and the sausages are cooked, probably about 40 minutes. Again use your own judgment. When I made this recently, I made two pans worth. I did think to rotate the pans, switching racks halfway through to ensure evenness of browning and crisping. But we needed only one pan for that meal. I left the second pan in the oven, which had been turned off but was still hot, while we ate, and when I took it out later I wished we had eaten that second pan instead. The extra ten minutes in the heat made the potatoes sinfully crispy and delicious. I had a hard time not eating too much!